Close up of businesswoman reading financial stock market analysis on smartphone on the go, in downtown city street against illuminated urban skyscrapers in the evening. Business on the go

Four years ago, a little-known developer named Niantic created Ingress. It was a location-based mobile game that set the stage for their next big game, Pokémon Go. Both are extremely fun and get you out of the house, but with very different flavours. Here’s how Niantic’s two hits compare.

Pokémon Go is based on the same data and made by the same company behind Ingress, so it’s no coincidence they’re pretty similar. The key distinction between them is that Ingress has had nearly four years to mature, while Pokémon Go has only been out a little over a week. Comparing the two is more for fun and to see how each can improve. [related title=”More Stories on Pokemon GO” tag=”pokemon go” items=”5″]

You can play both games simultaneously and it actually works pretty well. Since Pokémon Go was based on the same location data that Ingress uses, you’ll often find that Pokémon gyms and Poké stops are also Ingress portals. If you play one game, you may even bump into people playing the other. It’s a pretty neat connection that all the players can share. Like any good friends, there are a few things these games can learn from each other.

Ingress Has a More Organised Community, But Pokeon GO’s Is Bigger

Cross-faction portal art organised by the Atlanta Ingress community. Ingress also has organised communities on Google+ and Facebook where you can make plans with the people in your area. Most cities have separate groups for the two major factions, the Resistance and the Enlightened. Since Ingress requires working with others to succeed, these groups are invaluable. Speaking as a player who was around in the early days, there were many competing groups, which made it hard to coordinate. These days, the community has settled enough to pull off some amazing feats.

Pokémon Go on the other hand is still in its chaotic, embryonic stage. In my city, I’ve found multiple all-inclusive groups, as well as several splintered groups for each of Pokémon Go’s three factions. These too will settle over time, but for now you’ll have a harder time coordinating with other players in your area. The lack of any kind of in-game chat system makes this even harder. You have to know someone in real life who’s playing the game to get any kind of word-of-mouth about organised groups in your area.

Fortunately, this is where Pokémon Go shines. The game is riding a wave of popularity, news coverage, and social media chatter that makes it super easy to find other people playing the game. Even if the community is disorganized, you won’t lack for people to play with for a very long time.

Pokemon Go Has More to Do, but Ingress Is Better at Finding Activities Pick a direction, walk a few steps, and you’ll probably trip over all these Pokémon.

Pick a direction, walk a few steps, and you’ll probably trip over all these Pokémon. Pokémon Go‘s lack of social features isn’t so critical because it’s not hard to find something to do. Step a few hundred feet outside your home (if that) and you’ll find some Pokémon to catch. You can get through the first few levels solely by catching wild Pokémon. Some rural areas don’t have great spawn rates, but you don’t need to go to a specific location to find new Pokémon. You can even use items like incense to draw Pokémon to you. Anywhere you go, you can find something to catch. In theory, anyway.

Finding Poké Stops will be the most difficult hurdle for those who don’t live in dense cities. You need these landmarks to get resources like Pokéballs. You can buy more resources with real money, but that’s a pretty harsh penalty just for not living in the city. Fortunately, Poké Stops are fairly common. Unfortunately, the game offers almost no way to find these without walking around.

On the flip side, Ingress doesn’t offer much to do if you’re not near a portal. You can collect XM — a resource that you need to perform actions like attacking a portal — but most portals have huge supplies of XM nearby anyway. The upside is that this motivates you to get out of the house more, but the downside is that, again if there are no portals near you or you don’t live in the city, you run out of things to do real fast. One of many missions in my area to find portals.

One of many missions in my area to find portals. To help with this problem, Ingress has a Missions tab where you can find ready-made adventures for exploring your area. For example, in my area I have missions to explore each portal at a nearby Six Flags, a tour of historic sites in a downtown area, and a trail through the memorials at a nearby cemetery. Completing these missions earns you badges and awards for your player profile. If you prefer to make your own adventure, you can use the Intel Map. This tool lets you explore your area to find portals near you and what level they are. This can help you plan a trip before you leave the house to make sure your walk isn’t wasted.

Similarly, because Ingress’ community is so established and organised, players participate in global events called “anomalies” every quarter, “first saturdays” every month, and “mission days” periodically, hosted by Niantic in major cities around the world. On those days players travel from all parts to meet up, play together on the streets of cities like Brooklyn, Tokyo, Shanghai, Lima, and more, fight for their faction, and then all kick back and enjoy a cross-faction party when it’s over.

Ideally, Pokémon Go will adopt some of these features over time. Pre-made quests would give Pokémon trainers some great adventures. In the meantime, however, you can still use the Ingress tools for both games. Since Niantic uses most of the same location data for both games, if you find a portal on the Intel Map, there’s a good chance there’s a Poké Stop or gym there, too.

Both Games Have a Level Cap Problem, but Pokemon GO’s Isn’t As Bad 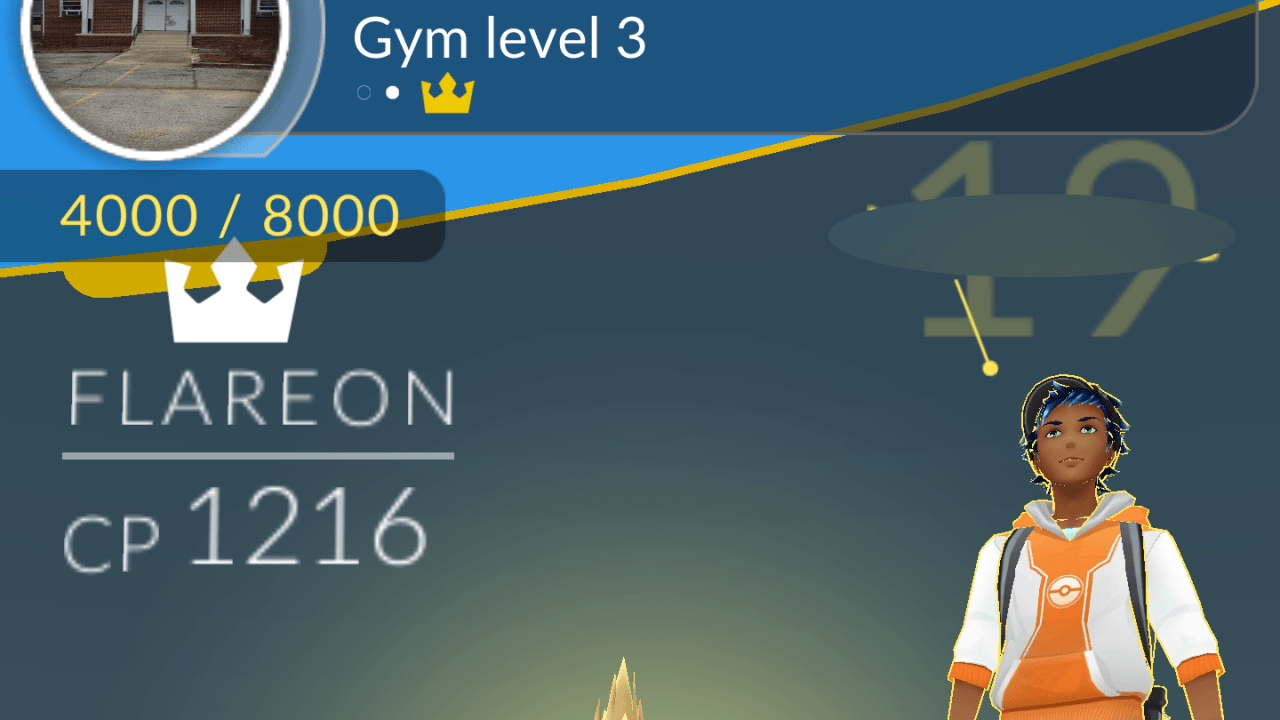 Yeah, I’ll get right on this fight with my CP187 Raticate.

Yeah, I’ll get right on this fight with my CP187 Raticate. In any online game, there’s an inherent tension between low and high level players. People who play once a week will never be able to compete with people who spend hours in the game every day. In some ways, this is ok! Both games are also cooperative play, which means low level players are rewarded for partnering with high level players, and high level players can help newbies along. The downside is that it can make it hard to keep up with the big dogs.

In Ingress, portals are guarded by objects called “resonators.” Higher level players can put resonators on their portals that are near-impossible for low level players to destroy. You can gain experience slowly by hacking enemy portals, but the big gains come from capturing portals, destroying enemy portals, and linking portals together. If you’re low level and don’t have high level friends to lend you a hand, or help you gear up, this can make it take a long grind to level up. This is where organised communities come in handy. You need a strong team to help take portals, build fields, farm for items, and rise through the ranks quickly. Once you’re level eight in Ingress, however (the level cap is 16), you’re pretty much good to go and the drive to level more stops. Once you hit the level cap, well…there’s not much to do, except what you’ve been doing all along.

Pokémon Go suffers from a similar problem, to a much smaller degree. Catching Pokémon allows you to level up, which means you have an ample supply of tasks you can grind away on to build your level. You join a faction (Valor, Mystic, or Instinct) at level five, but gyms are typically populated by seasoned Pokémon that beginners would have a hard time with. Much like Ingress portals, gyms are designed to be attacked in teams, or by high level players anyway. However, they’re not the only way to level up.

For the players who only want to work with others occasionally, Pokémon Go is wonderful. While writing this I took a walk down to a couple nearby Poké Stops/portals. On the way I was able to catch five Pokémon and get a few resources. I couldn’t attack the gym nearby because it was too powerful, but I could still do things. Meanwhile, in Ingress I could only hack a couple nearby portals for a pittance of experience. I was locked out of parts of each game, but I felt the sting from the balance issues in Ingress a lot more.

Ingress Is For the Die Hards, Pokemon GO Is For Everyone

Ingress holds a special place in my heart since I’ve been playing (off and on) for the entire four years it’s been around. I see its fingerprints all over Pokémon Go and it thrills me to know that players of this new game will get to have a similar experience to mine. Whether you’re chasing portals or Pokémon, any game that gets you out of the house and socialising is a winner in my book.

That being said, despite its many improvements, Ingress still has a slightly higher barrier to entry. The fact that you can’t do anything without portals and levelling is slow without a team are pretty huge drawbacks. It’s insanely fun to cooperate with the local teams to make art out of portal fields, or attend live events. However, new players will have a tough time getting started, especially now that the game is so far along.

Pokémon Go, on the other hand, is so accessible even kids can enjoy it with their parents. You can engage as much or as little as you like and the game won’t stop you. If you want to grind away until you’ve conquered every gym in your town, or just catch a few Pokémon on your daily walk, you’re welcome. Hopefully Niantic adds some of the same quest tools or social features that Ingress has, but it’s still early days. If Ingress is any indication, Pokémon Go is only going to get better over time.