A Parent’s Guide To Playing Pokémon GO With Your Kids

While Pokémon GO is geared toward adults and teens, a lot of parents are playing it with their children too. I helped my kindergartener install it yesterday, and we spent an afternoon at a park looking for Pikachu. There are some safety concerns, but lots of potential for exercise and learning, too. Illustration by Angelica Alzona.

If you’re still not sure what this game is all about, read our explainer. It’s a free app for both iPhone and Android. Basically, you walk to places in the real world to collect in-game supplies and characters. You can catch the Pokémon characters almost anywhere, but if you want them to battle, you have to go to real-world locations called gyms. Stops and gyms are located at places like libraries, churches and parks.

Figure Out Which Parts of the Game Are Age Appropriate 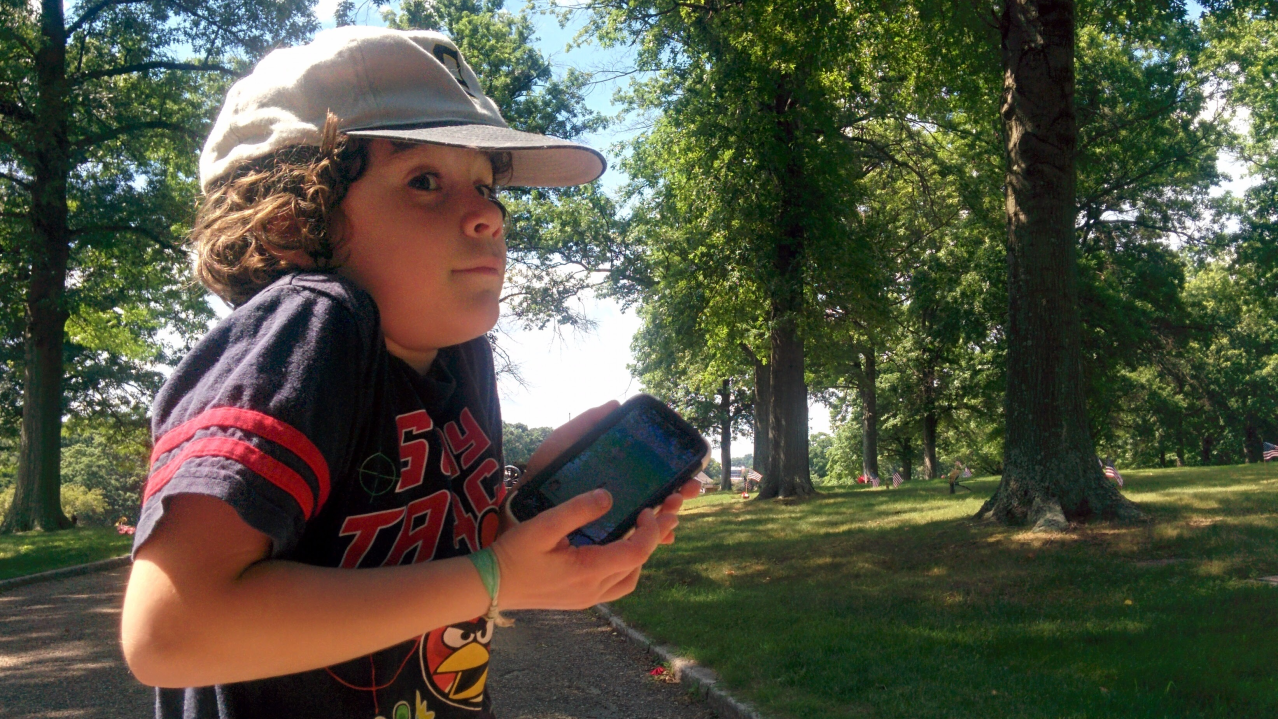 For a kid to get the most out of the game, it really helps if they can read and do simple maths. You can read them the instructions at the beginning, but they will keep encountering creatures and objects that have names and stats.

To involve toddlers and preschoolers, you can play the game yourself, and offer the kid a chance to help spin at each Pokéstop. They can also try to throw Pokéballs to catch the Pokémon you find. That job takes a little dexterity, but if you have enough Pokéballs, why not let them practise?

Once kids are old enough to have their own phones and transportation, they’re certainly old enough to play the game without help — but now you have to worry about where they’re going and whether they’re paying attention to their surroundings. More on that in a bit.

Set Up a Phone to Play Pokémon GO You can install Pokémon GO on your own phone, of course, but if you hand it to a Pokémon-happy kid, you may never get it back. Instead, see if you have an old phone or tablet around that has GPS capabilities – you can refer to our article here to check compatibility. Even if it only has Wi-Fi and not a mobile data connection, you can still play the game.

You can do this by sticking to areas with Wi-Fi, of course. It’s even possible to catch Pokémon without leaving home. Or you can use your own phone as a Wi-Fi hotspot, if your data plan allows, so you and your offspring can tour Pokéstops together. Be aware that the iPod Touch doesn’t have GPS, so it needs to connect to stationary Wi-Fi spots (not your phone’s hotspot) to know its location.

Since Pokémon GO has lots of opportunities to spend real money, you may want to limit in-game purchases. On an iPhone, there’s a setting to turn off in-app purchases. On Android, make sure your phone is set to ask for a password for every purchase (and don’t blab the password).

I go a step further, on my kids’ phones. I have a throwaway google account that’s just for their games, and I don’t enter a credit card for payment. I just buy Play Store gift cards, so if they somehow find a way to spend money, the worst they can do is drain the $30 from their account.

Starting to Play With Your Child My son’s reaction to catching his first Pikachu

My son’s reaction to catching his first Pikachu

The first thing the app does is ask your birthdate. For adults, it then asks if you want to log in with your Google account or with a Pokémon Trainer account. For kids (13 and under), it doesn’t offer Google as an option. Unfortunately, since Pokémon’s servers are currently overloaded, it may be impossible to create a Pokémon Trainer account. You may want to create a dummy Google account (technically belonging to you, the parent) and have them log in that way.

When you begin, you can customise an avatar, and then it’s time to catch your starter Pokémon. (You don’t have to wander around for this one.) If your kid’s heart is set on Pikachu, there is reportedly an Easter egg that lets you catch Pikachu as your starter. It may not be easy to actually catch the little guy, though, so remind the kid that you can always go looking for wild Pikachu later. One of these kids set up a lure before (or during?) soccer camp.

One of these kids set up a lure before (or during?) soccer camp.

Remember everything you taught your kid about watching where they’re going, holding hands near busy roads and looking both ways while crossing streets or parking lots? They’re going to completely forget all that when they have their eyes glued to their phone. It’s worth having a little talk with them before they get run over by a car, about how to be careful and how maybe we’re going to put some more rules into effect — like only crossing a street when their phone is in their pocket, perhaps.

If your kid is old enough to wander around on her own, remember that she may now be walking around oblivious to her surroundings (even if she promises to be careful). You may want to revisit rules in this case, too: Are you still OK with her travelling to the same places she’s usually allowed?

Lures make the situation a little more complicated, from a parent’s perspective. A player can set out a lure to attract Pokémon for 30 minutes, but since these lures are visible to nearby players, they have the effect of luring people too. This can be fun: A bunch of kids can catch Pokémon together, or a library or museum can set out lures to help attract people for an event. It can also be concerning to parents. Who’s setting out that lure, and why?

It would be possible for someone to set out a lure to attract kids for nefarious purposes — maybe a potential abuser, or just the neighbourhood bully.

Update: I've gone to Pokelures two more times since then with this same kid and am starting to get to know him. Creeps could do the same. :/

Be sure to ask your kid who he’s been running into while playing games. You don’t need to panic, but it may be worth revisiting your talks about how to recognise people and situations that might be unsafe.

Have Fun, And Learn Something Roaming around may be the most worrying part of playing Pokémon GO — but that’s also what makes it worthwhile. How many video games come with built-in exercise, education and opportunities to learn about art and the natural world?

The exercise is a given: You have to walk to incubate eggs, for instance. Driving doesn’t count, and the app knows the difference. Parks will often have a bunch of Pokéstops close together, so even if you have to drive to get there, you can walk around to monuments, statues and historical signs to collect supplies and look for new Pokémon. Different kinds of places have different Pokémon. I caught a goldfish-like Goldeen today near a lake.

But there’s more. A lot of Pokéstops are at interesting places, including historical markers. Yesterday my son and I visited a cannon in a cemetery (dedicated as a war memorial) and a chestnut tree nursery in a park. I had driven by those trees a million times without knowing what it was, but signs explained how the area’s chestnut trees had been devastated by a fungus and park workers were trying to protect some of the trees so that they could reach maturity.

While you’re out wandering, you may even find real animals. Some wildlife experts on twitter are now monitoring the hashtag #PokeBlitz to help you identify the birds, bugs, snakes, plants and other things you might find while looking for Pokémon.

The game intertwines so many interests that it’s a natural for family outings. And since you can play it almost anywhere, it works for city strolls as well as nature walks. Watch out for safety concerns, to be sure, but don’t forget to have fun.