How Finding The Right Community Can Help Your Creativity 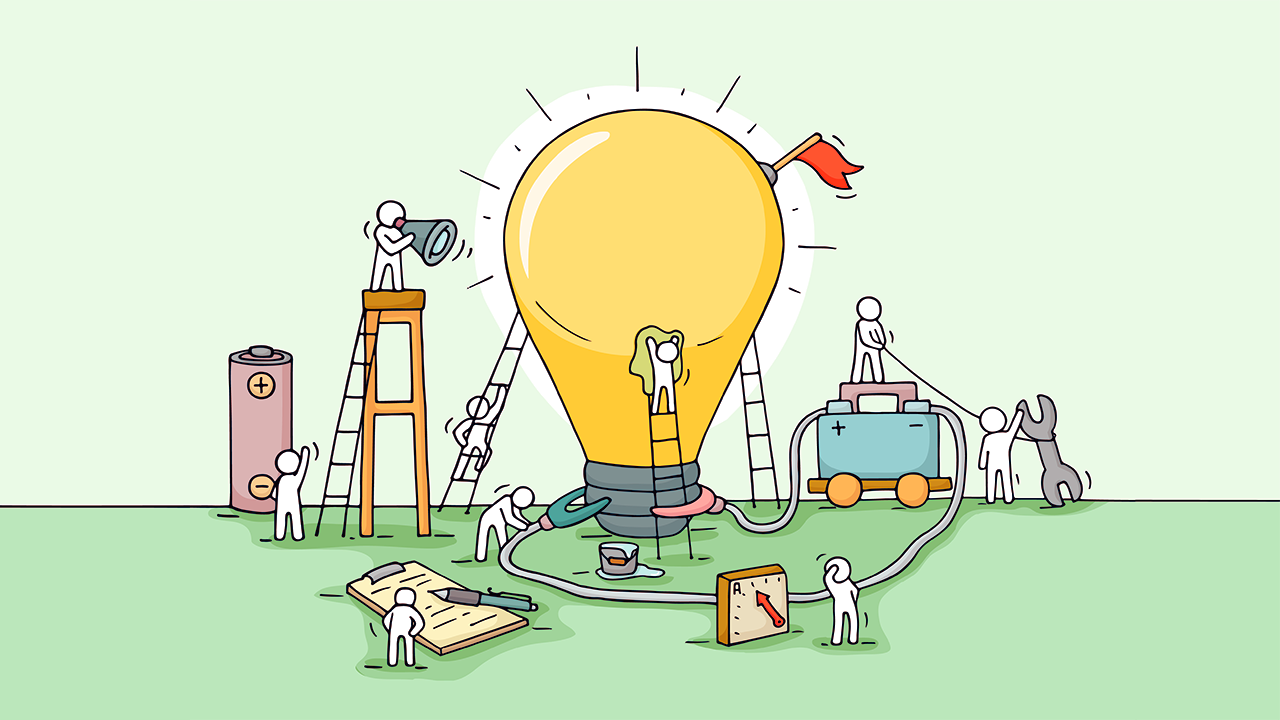 Van Gogh may now be widely recognised as one of the most influential and creative artists of all time, but he died alone and penniless. Why? Because 100 years ago his canvas' were seen as the hallucinatory original works of a sociopathic recluse. It wasn't until years later, when other artists and critics had defined a new aesthetic criteria for art, that his works were accepted as creative masterpieces. This post originally appeared on the Crew blog.

We may see 'creativity' as an individual trait — something that we do on our own — but real creativity depends on a community of like-minded people. Peers who say, "This is new. This is exciting. This is better than what we have." Real creativity is innovative. It's disruptive. It challenges and changes the way we think about established ideas.

But to get to that point, you need feedback. You need criticism.

In the early days of any project it can feel like you're safeguarding a suckling babe — guarding your big idea from the world that wants to poke and prod and judge it to pieces. Too much feedback early on causes questioning, crippling self-doubt and that horrible panicky feeling that your big idea — the one that you thought would change the world — might not be so big after all.

When can we bring our work to the masses and find out if we're truly being creative, or just smearing our thoughts on a canvas?

Mihaly Csikszentmihalyi, who's probably best known for popularising the idea of "flow", explains in his piece outlining his Systems Theory of Creativity:

Psychologists tend to see creativity exclusively as a mental process [but] creativity is as much a cultural and social as it is a psychological event.Therefore what we call creativity is not the product of single individuals, but of social systems making judgments about individual's products.

Your best creative ideas might come when you're alone in the shower, but creativity itself presupposes a community of like-minded people who share ways of thinking and acting — who learn from each other and imitate each other's actions.

Csikszentmihalyi's Systems Theory explains that creativity is made up of the individual and the environment, which itself has two aspects: a cultural aspect he calls the domain; and a social aspect called the field.

In his theory, creativity is defined as "a process that can be observed only at the intersection where individuals, domains, and fields interact". 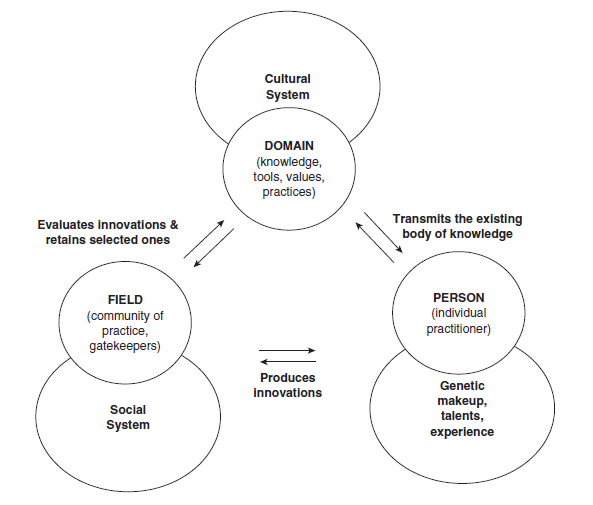 Think of it like this: Your idea, whatever it is, can be unique and original in a domain, but without the validation of the field — your peers and the community at large — it isn't really creative.

If, like Steve Jobs, we look at the creative process as connecting the dots, then Csikszentmihalyi's idea of creativity is when the community selects your idea as one of their dots to connect.

Think about the thrashing power chords and guttural screams of early punk. Sure, it may have seemed like an entirely new way of playing music, but it happened within the domain of music and was validated by the community of music listeners (well, most of them at least!).

Or, on the other end of the spectrum, you've got something like chemistry where before the adoption of the periodic table, chemists had no way of really showing that they were innovating or coming up with creative ideas. Sure there were original ideas, but there was no domain knowledge that new ideas could be stacked up or judged against.

As Csikszentmihalyi continues in his theory: "Without some form of social valuation it would be impossible to distinguish ideas that are simply bizarre from those that are genuinely creative."

It Doesn't Matter Where You Work, But It Matters Who You Work With

So where do you find this group that will validate your idea?

Musician Brian Eno calls this community a "scenius" — a group of creative individuals who make up an "ecology of talent". Your scenius might be the people you work with. Or a community like Product Hunt or Medium. Or even a group of friends or peers.

Whatever it is, the one thing that needs to always be addressed isn't really who you share your ideas with. But when.

With the current trend towards sharing your work and iterating quickly, we're relying too much on the field and not enough on our own knowledge. We let our ideas out into the world before they're fully formed, risking contamination. In fact, most "domains" that encourage sharing — things like Medium for writing, YouTube for videos, Dribbble for design and so on — include some way to gain mass feedback from your peers, be it through a thumbs up, heart or like.

And yes, we need feedback and validation, but being too involved in a community or group early on can lead to things like groupthink or self-censoring where your ideas — often in their infant stage — are forced to conform with current beliefs.

We need to find the right time in the creative process to let ideas out into the world. When they have grown past their corruptible stage and have enough of a shell to stand up to some outside criticism.

When To Ask For Feedback (And How To Take It)

Validation and feedback from your community, peers or even just someone close to you is an integral part of the creative process. But finding the right time to seek that validation can be a delicate balance. Too early and you'll risk missing those connections only you can make. Too late, and you might be too far down the road to get the right directions.

Here's a look at a few different ways to engage your community and use them to validate and enhance your own ideas:

1. Using Feedback as a Collaborative Tool

If you're working with a close-knit group of people, or have a good relationship with your "scenius", it's more common to get feedback and validation on your idea earlier on. Despite the fragility of your thoughts, the group all has a similar goal.

Writing in A List Apart, designer and illustrator Cassie McDaniel uses design critiques as an example of feedback as a collaborative tool — a chance to get outside input and correct your course along the way. She quotes Steven Johnson, author of Where Good Ideas Come From who explains how, "Often times the thing that turns a hunch into a real breakthrough is another hunch that's lurking in somebody else's mind." 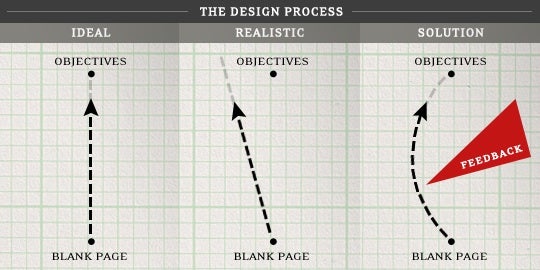 When the community you're seeking validation from is aligned in its goals, it's safe to let your ideas out earlier on for validation.

There's a difference between feedback and approval. In fact, you could look at this idea of "validation" from the community more as approval than feedback. But in almost all cases, you'll be facing some level of criticism and feedback on your work.

If you feel the need to validate your idea, or are stuck and want to bring in outside help, it's important that you solicit feedback in the right way.

First, understand why you're asking.

Then, seek out the right people in your community: trusted creative peers, mentors or teachers who have your best interests in mind.

If you're a writer, hire an editor. The accountability on both sides will help elevate the feedback from "that's nice!" to something you can actually use.

Lastly, know exactly what it is you're after. As creative coach Cynthia Morris explains:

[Asking] 'What do you think?' is like handing someone a loaded and lit canon and aiming it at your heart.

Instead, try asking yourself these three questions before soliciting feedback:

The more structured a feedback session is, the easier it is to take in, digest and implement.

There's a ton of articles out there explaining how to ask for feedback, but when it comes to taking criticism there's only one golden rule: Be ready to defend (without being defensive).

Earlier in this post I referred to your creative idea as a baby needing protection. It's a common image to invoke because that's how most of us feel. And as much as we'd love to come into a critique or feedback session with an entirely open and objective stance, it's pretty much impossible to remain emotionally detached. But too much attachment to an idea can blind you from the feedback that will take it to a place where you'll be truly innovative.

Leadership consultant John Baldoni, writing in Harvard Business Review, explains how being defensive opens you up to additional, unnecessary criticism:

Very often, [being] defensive will provoke negative behaviours such as lashing out or shutting down. You become caught in the moment and the niceties of polite discourse go out the window. It is fine to be passionate but you want to avoid becoming overly passionate, that is, unwilling and unable to listen to others.

Instead, Baldoni says we need to be prepared, patient and generous.

Be prepared to tackle the comments and issues that come up by having a through understanding of what it is you're making and why.

Be patient with the community you're looking for validation from. (Recognising good work can take as much time as actually creating it — just look at Van Gogh!)

And be generous with those giving you criticism. If you're in your scenius, or the community that you want to bring change to, know that deep down they all want that change to happen.

Creativity is the engine that drives cultural evolution.

But real creativity depends not just on you having an amazing idea (and actually acting on it!) but from making a change in the world. It's not enough to simply create. You need to convince.

We can all be bedroom geniuses, but it's the ones who leave the house that change the world.