How Brexit Will Affect Your European Travel Plans

As the initial shock of Britain’s decision to leave the European Union sinks in, it’s time to assess the details and look to the future. There are certainly more important concerns, but if you’re planning a trip overseas, one of yours may be, “How’s this Brexit stuff gonna affect my holiday?” We’ve got answers. Illustration by Sam Woolley.

Travel to the United Kingdom Is Cheaper

While it will take the UK a couple of years to fully exit the EU, there has been one immediate impact from Brexit: The British pound has plummeted. Look at how much the exchange rate between the pound and the Australian dollar has dropped: 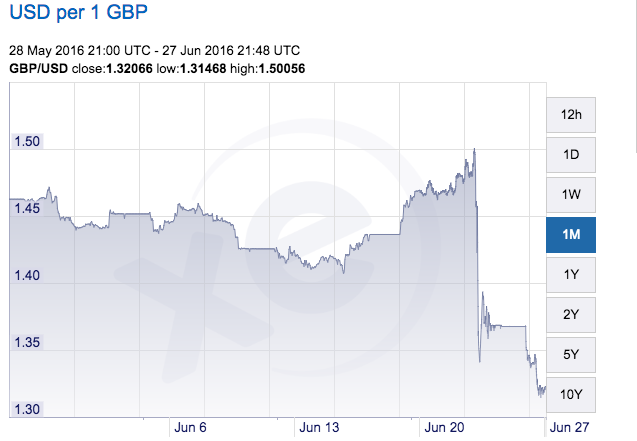 The euro has dropped a bit, too, and don’t get me wrong, this is nothing to celebrate. As far as travel is concerned, though, it’s a really affordable time for Australians to visit the UK or Europe.

Jack Ezon of Ovation Vacations told NBC News that prices are 10-15 per cent cheaper than they were last week. British Airways even has a Brexit Sale going on now. And Yahoo Finance predicts that tourists might save $US20 ($27) a night on a hotel room in London or at least get cheaper food and drinks.

Unfortunately, if you already have travel plans and have paid for your flights and hotels, you won’t be able to get any money back. However, Zach Honig, editor of The Points Guy, suggests a workaround:

This won’t work if you’ve already checked out, but if you’re currently staying at a hotel and you’ve authorised your card with a deposit at check-in, ask the hotel to process your final bill as a new transaction, so you don’t end up getting stuck with the less favourable exchange rate that may have been locked in on the date your card was authorised. While most clerks should know how to do this, you might want to pay with a different card than the one you provided at check-in, just to avoid any potential confusion.

As Travel + Leisure points out, if you have a trip planned, you might also save some cash buying pounds and euros before the currencies recover.

Discount Airlines May Get More Expensive

European airlines like Ryanair and EasyJet are notorious for their low prices. The European Union allows Europe-based airlines to fly anywhere in the single market whenever it wants, and this reportedly helps discount airlines keep prices low.

However, now that the United Kingdom won’t be part of that market, these cheaper carriers may need to rethink their strategy in the UK. That could mean higher ticket prices down the road. According to CNN:

Of course, it will take time for this to change, but many experts think the move could end cheap fares to the UK from the rest of Europe.

Some Travel Destinations May Be Less Crowded

A weaker pound means that travel will be more expensive for UK tourists — especially travel to the States, considering the exchange rate. Some experts say this means popular tourist destinations — New York, Los Angeles, San Francisco — could soon be less crowded. It may not seem like it would make a huge difference, but here’s what Mike Stitt of Travelzoo told the New York Times:

If British tourists, because of currency fluctuations, change their plans or don’t come to U.S., you may see some ability to get some better prices in some cities… We’re seeing a little of that effect now with the Canadian travellers. As their currency has plummeted against the dollar, Canadians are staying home.

Of course, this remains to be seen, but it makes sense considering the exchange rate. If you have US travel plans this winter, you may find fewer tourists in your destination. If you want to beat the crowds, it helps to know when these destinations are at their peak, too. Here are the peak, off-peak and shoulder seasons for popular destinations, courtesy of TravelZoo.

Airport Lines May (Eventually) Get Longer

For now, it’s business as usual at UK and European airports. UK travellers are still free to move between European countries and vice versa, but that will change once the Brexit is complete.

When the separation actually happens in a couple of years, European passport holders will presumably have a passport that doesn’t grant them immediate access to the UK, so they will have to line up with all the other “international” travellers. Similarly, UK tourists will have to line up at Charles De Gaulle just like the rest of us. As Yahoo Finance points out, this means wait times will be longer for everyone.

Plus, you’ll likely have to re-check luggage if you have a stopover in the UK. With the change, stopover travellers may have to enter customs in the UK, then enter again at their final destination. Experts predict that this will change the way people travel. To avoid the wait, travellers might avoid flights with layovers in the UK, for example.

The US State Department has already issued a warning for winter travel to Europe due to international sporting events: The Tour de France and the European Soccer Championship.

As Time points out, political and economic turmoil only makes things worse. There’s been some violence leading up to the vote, and while passions are high, you might consider waiting out your travel plans if you’re worried. If nothing else, this is a good reminder to stay on top of travel alerts and warnings. You can check any alerts for your destination here.

Beyond the turmoil, the rules for travel to the UK and Europe will more or less remain the same for the time being. We will, however, likely see more significant changes down the road