The Secret To Overcoming Procrastination: It’s Not About Willpower

Procrastination is a universal problem. Even the most irritatingly well-organised people know the agony of putting something off until the last… possible… minute. Why do we put ourselves through this misery, knowing the consequences? And how can we overcome the urge? Image via Shutterstock.

“I believe that it has to do with unexpressed emotion,” says psychotherapist Jude Bijou, author of Attitude Reconstruction: A Blueprint for Building a Better Life. “We have a task, and we get overwhelmed. The emotion there might be fear, and we freak out: ‘Oh my gosh, I can’t get this done in time!’ Or, the emotion is anger: ‘You can’t make me! This is stupid!’ Or, it could be sadness: ‘I’m not up for the task.'”

University of Calgary professor Piers Steel, author of The Procrastination Equation: How to Stop Putting Things Off and Start Getting Stuff Done (check out his tip-filled blog on procrastination and science, Procrastinus.com), points out that procrastination is often caused by the fact that motivation can frustratingly difficult to muster:

If you say, ‘Hey, I’ve got a pill that will give you the motivation right now. Would you like to take it?’, people will say, ‘Of course!’ It’s not that they don’t want to have the motivation, it’s that they have trouble finding it. We live in a world where procrastination has been getting worse and worse. The default is that most people do procrastinate. In fact, if you do things ahead of time, it’s remarkable.

Steel also believes impulsiveness is a factor. Many people are “very susceptible to nearby rewards rather than distant ones. That’s not always convenient, but that’s our nature,” he says. “And the world that we live in exploits that part of who we are. Just the availability of temptation can distract us quite readily from our larger, but later, goods. We all have life dreams, right? We all have things that we want to accomplish, the big hefty things: getting in a good relationship, having lasting friendships, satisfaction in our careers. And I don’t think anyone would disagree with these things. But on the other hand, what do we spend large parts of our days doing? Social media. Or Candy Crush.” 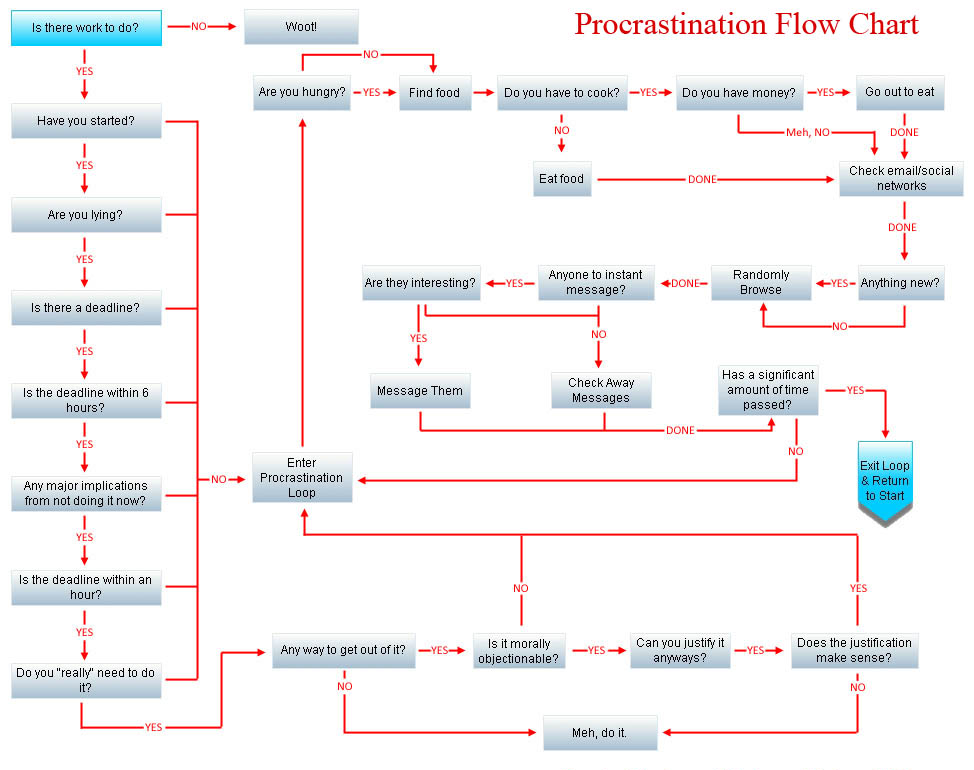 Flowchart via Birgerking on Flickr/CC 2.0

Dr Kim Kensington, who specialises in procrastination and adults with ADHD (see her website, The Procrastination Doctor), agrees:

Sometimes there’s anxiety wrapped up in whatever it is that need to gets done. Sometimes it’s an issue of prioritising — it never seems like the right time to do whatever it is if it’s not urgent. And with a lot of people I work with, the ADD brain makes it even harder to actually start things, even though you could just be sitting on the couch saying, ‘I need to get up, I need to just start this thing. How hard can it be?’ But actually activating is

How to Motivate Yourself

So what’s the first step? How do you get motivated? How can I stop staring at that huge pile of forms and actually make OH GOD I DON’T WANNA DO MY TAXES happen? All three experts offer advice that makes sense on paper, but requires a bit of mental fortitude to actually implement.

“The best thing to do when we’re procrastinating is to identify whether it’s sadness, anger, or fear that’s really in our way,” Bijou says. “And then, to move that energy out. Have a little bit of a cry, or stomp around — deal with the emotional energy, and then you’ll be able to think more clearly, and break the task down into little, doable pieces. Recalibrate your thinking. Instead of going, ‘Oh, I can’t do this, it’s too much!’, try, ‘I’ll take one thing at a time,’ almost like a mantra that gets your mind going in the right direction so you’re not sabotaging yourself. Figure out what the task is, and make a list of all of the simple tasks that make up the big, overwhelming task. Then start with just one.” 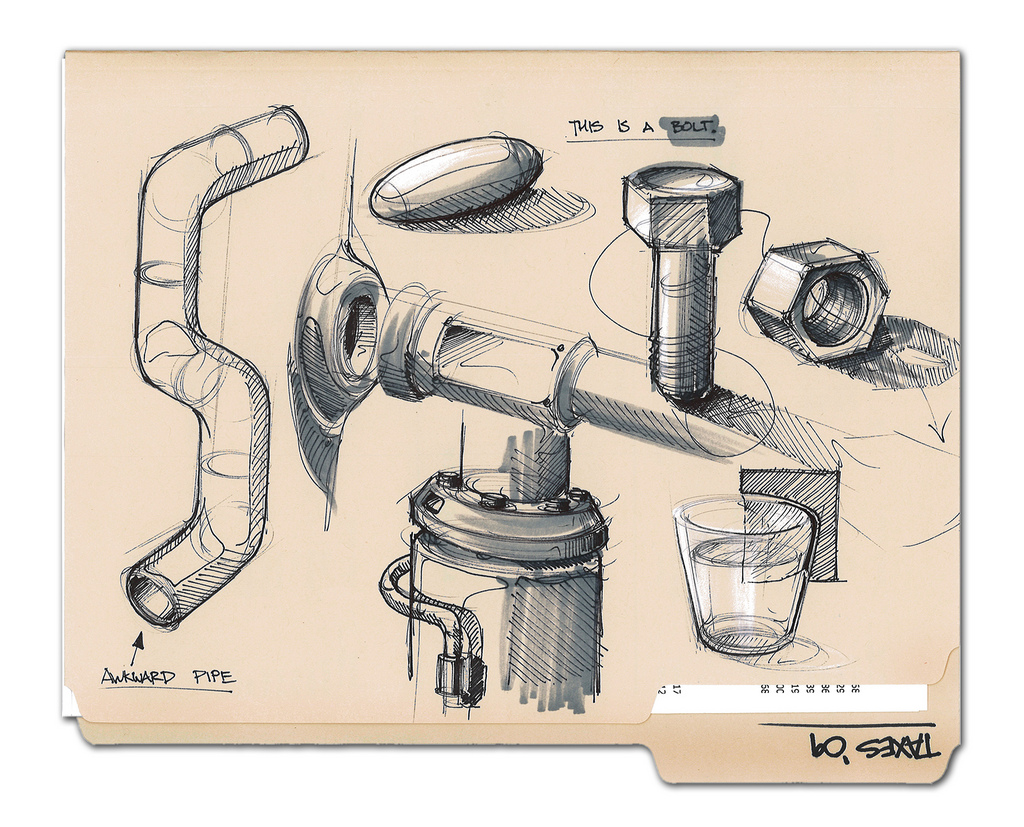 Kensington also suggests the simplification method. “If you find yourself completely stuck doing something and you can’t seem to get anywhere near it, [just] try to figure out what the next step is, down to the point where you could tell a nine-year-old: here’s what you do. To make it really, really explicit, because a lot of the reason we don’t do stuff is because we can’t quite figure out what the next step is.”

She also suggests forming new habits by “attaching it to something you already do. Something that you do a lot. Like if you always read a certain blog, and you look forward to doing it, put five minutes of doing something challenging right in front of that, consistently. Then, you get to reward yourself after with the blog.”

Another technique: blocking out time. “If you just set out a 20 or 30 minute block of time where you’re going to deal with, for example, anything to do with your finances, do it in there. You can pick and choose, and it all counts.”

But she cautions that sticking to a time limit is key. “If we tell ourselves we’re going to do something for a set number of minutes, and then we don’t stick to that, then we basically lie to ourselves. Once we get started, we’re often afraid to stop because we’re so afraid we’re never going to start again, and then it becomes an unpleasant experience… which makes it even harder to start the next time. If we use a timer and we respect it, that thing that happens where you speed up and become more effective toward the deadline can happen. But that only happens if you respect the deadline that you’ve created for yourself.”

Steel agrees. “You know you get motivation just before deadlines. If you could reverse engineer them and create deadlines of your making, artificial ones that have the same qualities as the real ones, they work even better.”

However, he cautions, being honest with yourself is a key part of overcoming procrastination. “Sometimes it’s not a problem with your goals, it’s a problem with your temptations. The more available they are, the more obvious they are, the more you’re gonna use them. [And] if you’re insisting that you are somehow different than you are, of course you’re going to run into problems. It’s running into a brick wall and saying ‘No, that brick wall shouldn’t be there!’ Stop pretending your nature’s somehow different.”