Whether you think it’s narcissistic or pointless, selfies are all the rage these days. If you want to take a good shot of your mug, you need good equipment. Oppo has just launched the F1 which touts an eight-megapixel front-facing camera. I put my face (and my dignity) on the line to find out how it fares against Samsung and Apple devices.

Disclaimer: The copious amounts of selfies in this article were taken for review purposes only. I am not a model. I do not think I’m a model. I’m under no illusions that I’m ridiculously good-looking. This is not a r/RoastMe sub-Reddit feed so please refrain from calling me names and shattering my fragile self-esteem. (I apologise for any accidental “Blue Steel” looks and bad hair.)

I’m not great at selfies. Occasionally I will snap one that turns out quite nice but it’s more often by chance so I need all the help I can get from a decent camera phone. Chinese phone manufacturer Oppo recently released the Oppo F1, a camera marketed as a “selfie expert”. Big call.

The F1’s main claim to fame is an 8-MP front-facing camera which boasts a wide f/2.0 aperture and 1/4-inch sensor. (There’s also a 13-MP camera on the back.) This is significantly beefier than most front-facing cameras which still tend to some with 2-megapixel sensors. But just because something sounds impressive on paper doesn’t mean it’ll work in practice.

We decided to pit the front-facing camera on the Oppo F1 against two of the most popular smartphone brands in the market: Samsung and Apple. Specifically, we used a Samsung Galaxy Note 4 and the Apple iPhone 6s. Here’s a brief breakdown of the front camera specs side-by-side:

After doing a bit of research, it appears that natural light yields the best selfies. I stood in front of the window in my office and snapped my mug using the three different smartphones. Here are the unedited pictures that were taken by each device:

My initial impression is that the Samsung camera definitely dulled down the colours. I look a bit sullen and I’m not a huge fan of the wide angled camera. It’d come in handy when you’re taking a group shot but it captured way too much of the background (which I cropped out).

I’m quite impressed with the Oppo picture and, as you can see, the photo is a lot brighter compared to the Samsung one. It captured enough detail while my leaving some of my skin imperfections out. This is perfect for me since I don’t wear foundation at all.

The iPhone captured the most detail and added a reddish warm tone to the picture. But too much detail may not be ideal when taking a selfie. I feel as though it brought out my blemishes a lot more, but I can’t really fault the camera for producing high quality photos.

I’ve seen enough selfies of people in clubs and dimly-lit restaurants to understand that it’s important to have a camera that can take decent photos in low light environments. 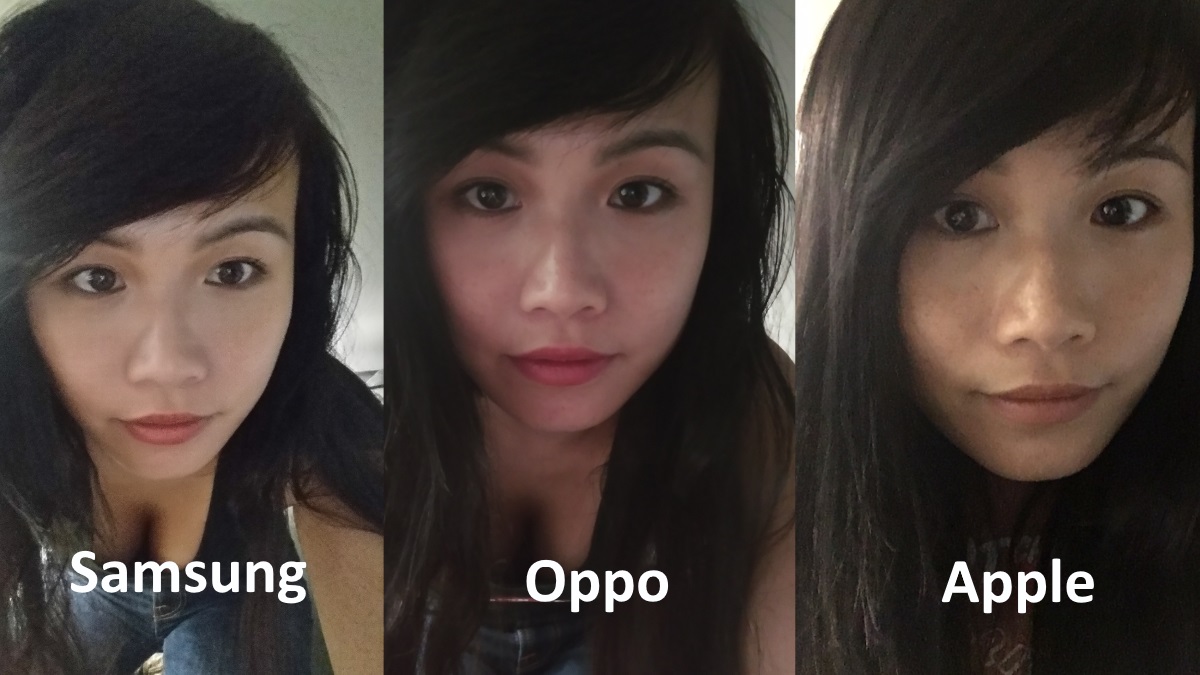 Samsung’s camera worked a treat despite not having much light to work with. Meanwhile, the Oppo had some colour saturation issues and made me look as though I’ve had a bad sunburn.

Admittedly, I had to take the Apple picture on a separate day but the lighting conditions were unchanged. The shot turned out okay although the colours were a bit muted. Definitely not my favourite picture.

This is something that pretty much any phone can handle, but it’s still worth checking which model does the best job. To test each phone’s outdoors performance, I snapped myself in front of the sunny waters of Circular Quay outside out office. (Don’t be jealous. It was disgustingly hot.) 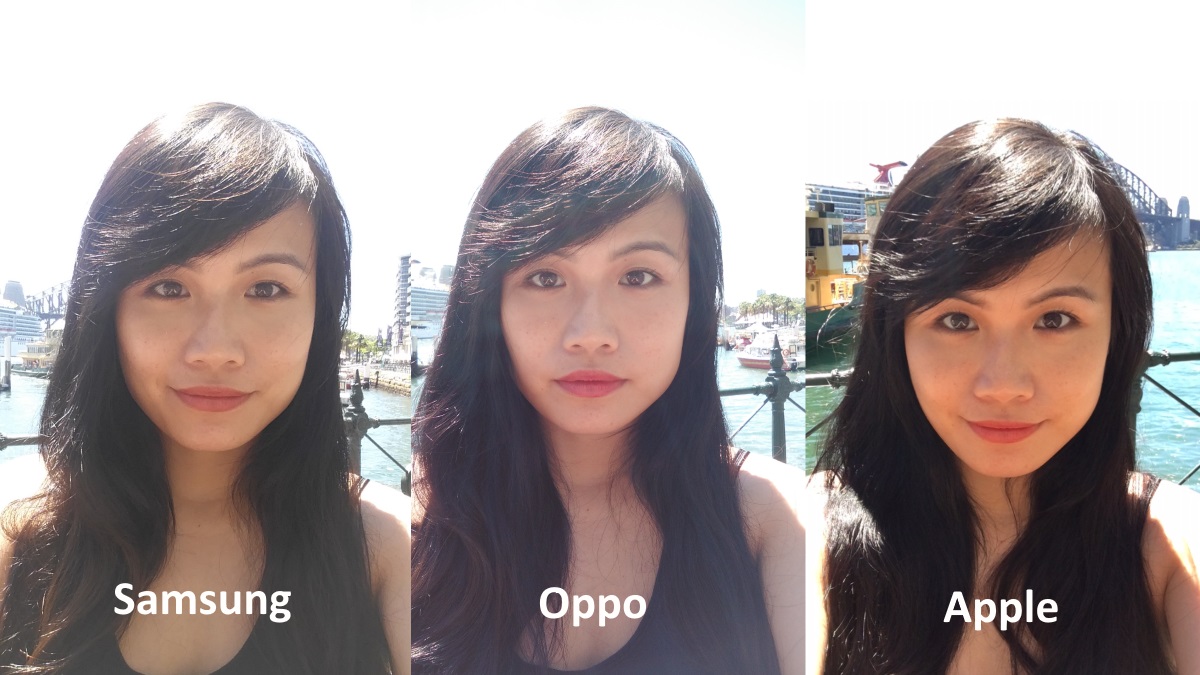 The Samsung and the Oppo’s performance were similar outdoors. I tried moving the camera around to improve the image quality but still ended up with over exposed photos. Meanwhile, the iPhone was smart enough to adjust itself and took a vibrant selfie with a ton of detail.

Oh, the dreaded “beauty filter” that phone manufacturers seem to be obsessed with that turns people into wax dolls. Heavy-handed use of this type of filter makes you look like you’ve overdosed on Botox.

Only the Samsung and the Oppo had a beauty filter function so we pitted them against each other.

The Oppo has three beauty filter intensities while the Samsung had 10 levels of strength that users can adjust. I’m not even going to bother showing you what the photos looked like with both filters maxed out because you could barely tell it’s me. I looked like Michael Jackson incarnate. What I will do is compare each of the beauty filters in low setting. The idea is to blur the images enough so that you can still see facial features while smoothing out the imperfections. 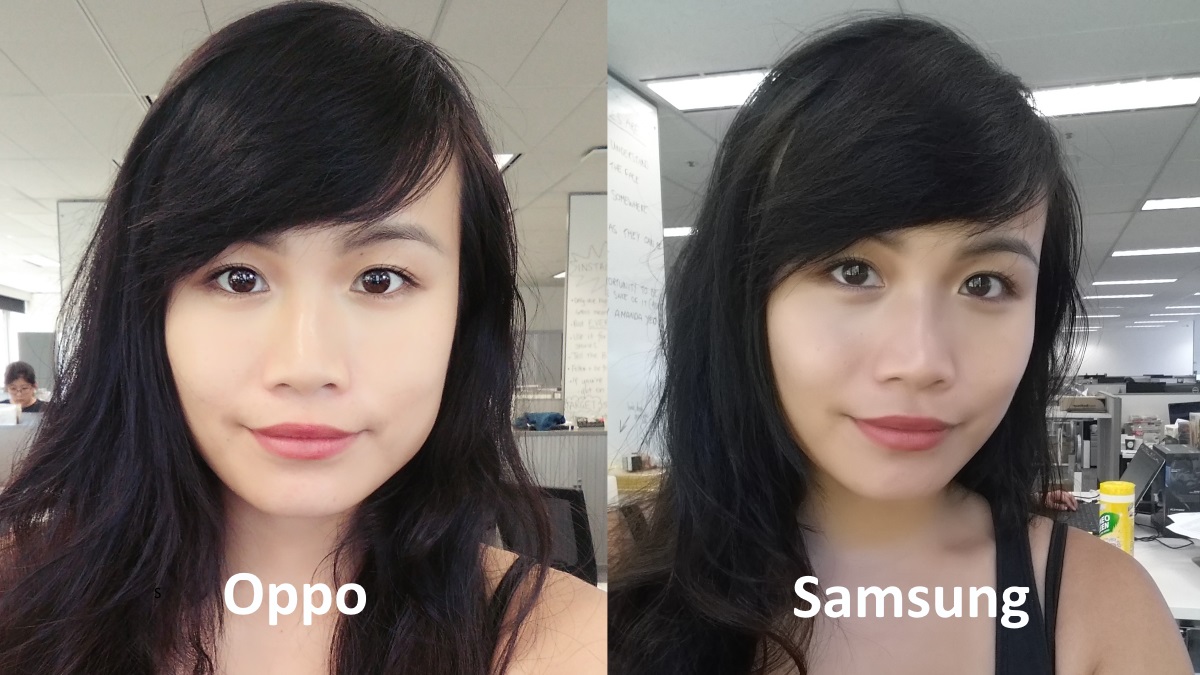 Holy Guacamole. Oppo’s beauty filter is a bit too strong for my liking. I prefer a picture where I can actually see my own nose properly. I look like a semi photo-realistic 3D rendering (Uncanny Valley, much?). I never thought I’d say this, but I don’t want to look that flawless.

The Samsung filter appears rather natural and retains enough contrast on my face so that you can tell I’m still a real human being. You can barely notice that it has been turned on and I really like that kind of subtlety.

Each of the smartphone front-facing cameras had their pros and cons in different environments. At this point, I think the Oppo is a stand-out, not because it performed the best overall, but because it exceeded my expectations for a phone that retails for under $300. If you’re a selfie-addict who’s strapped for cash, the Oppo F1 could become your new best friend.