Cracking Wi-Fi passwords, spoofing accounts and testing networks for exploits is all fun enough, but if you want to take the show on the road, you’ll want an easily portable rig. Enter Kali Linux and the Raspberry Pi.

Kali Linux is an operating system built for network penetration testing. You can run it on your laptop to crack nearby Wi-Fi passwords, spoof networks, test for Bluetooth vulnerabilities, and tons of other things. Remember, using this knowledge to break into protected networks will likely get you arrested and charged with a felony — possibly a federal charge of violating the Computer Security Act. You should only use this knowledge for good, for your own learning, and only play with networks you control. We’ve talked pretty extensively about using Kali Linux before, so we won’t go through that here, but check out our guide for an overview of everything you can do with it. All of that applies to the Raspberry Pi version we’ll build here as well.

The Raspberry Pi is a small, credit card sized computer that doesn’t require a lot of power to use. When you combine the Raspberry Pi and Kali Linux together, you get a super-portable network testing machine that you can bring with you anywhere. In this guide, we’ll show you how to get Kali up and running on the Raspberry Pi with a touch screen. This way, you never need to install Kali Linux on your primary computer. 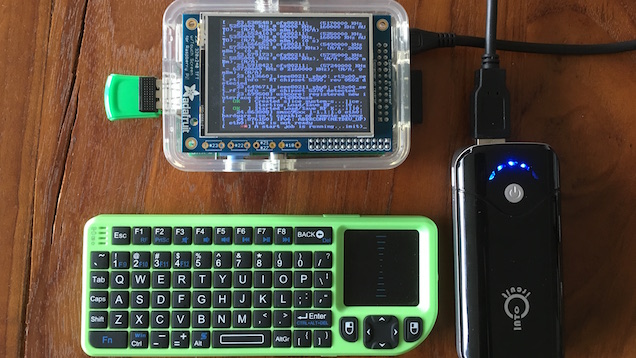 Step One: Install Kali on the Raspberry Pi

Before we do anything, you’ll need to download and install the touch screen build of Kali Linux image for the Raspberry Pi. It’s just like installing any other Raspberry Pi operating system, which we’ve walked through in detail here, but here’s the short version:

How to Install Kali to Your SD Card in Windows

How to Install Kali to Your SD Card in OS X

Step Two: Hook Up the Display

The Raspberry Pi has a GPIO (general-purpose input/output) that the touch screen fits into. On your Raspberry Pi, it’s the set of pins in the corner — it should be pretty obvious how it fits together. Go ahead and click your display into the Raspberry Pi.

Step Three: Plug Everything In and Power On

With the display attached, it’s time to plug everything else in. Plug the Wi-Fi adaptor and the keyboard into the USB ports. Then, plug the Pi into your battery pack.

The startup process can be a bit slow and clunky here, so don’t worry if it takes a little while. First, you’ll see a white screen for a little while before the boot process starts up. Eventually, you’re greeted by a login screen.

Step Four: Log In and Enable Your Wi-Fi Card

Now it’s time to log in and enable the Wi-Fi card so you can actually use the tools inside of Kali Linux. The Raspberry Pi will automatically recognise your Wi-Fi card, but you’ll still need to login to your network. First thing first, we need to launch the Kali Linux graphic user interface and make sure everything’s working:

When you’re finished, press Ctrl+X to save and exit. Your Wi-Fi card should now work (though you may have to reboot first).

Before you do anything else, you should really change the root password of your device (lest someone else with similar hacking skills gain control of it). Thankfully, it’s easy.

Now your little portable system is set up and secure.

What You Can Do With This Device

From here, what you do with your little portable hacking station is up to you. You can use the touch screen on the Pi for basic navigation and run any program in Kali Linux you want. If you don’t know where to start, here are a few ideas:

The world is your oyster. Hack responsibly, everyone.