This Control Ladder Helps Identify The Various Stages Of Leadership 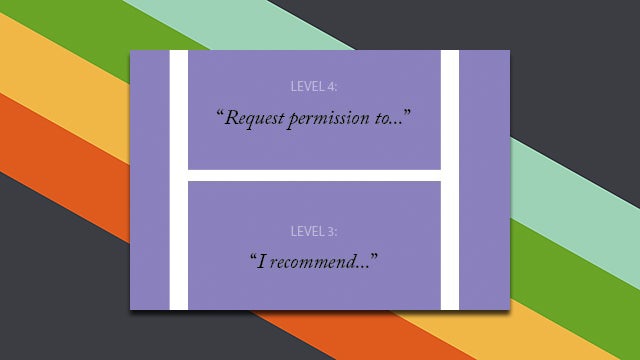 When you're leading a group of people, it's typically better for you and everyone around you if the people you're in charge of can work autonomously. This chart helps identify the various stages of employee independence so you can help coax them (or yourself!) upwards.

As productivity blog 99u points out, people tend to go through various stages of independence from direct supervisor approval. Obviously, no boss wants to have to tell each and every employee exactly what to do at all times, but sometimes people can get stuck on certain rungs of the control ladder. Whether you're in charge or you're the employee looking to gain a little freedom, the language used can go a long way towards moving up. The author explains how this worked while running a nuclear submarine:

We changed this. Officers stopped asking permission and instead stated "I intend to…" The effect was immediate and profound. Now, officers stated, "Captain, I intend to submerge the ship" and I would respond, "very well." That was the perfect end state.

Not all of us will have to take our respective chains of command as seriously as that of a nuclear submarine, but the principles are the same. The less we have to get instructions or ask for permission on every single detail, the more smoothly things run for everyone. Check out the full diagram at the source link below.

Why Motivating Others Starts With Using The Right Language [99u]