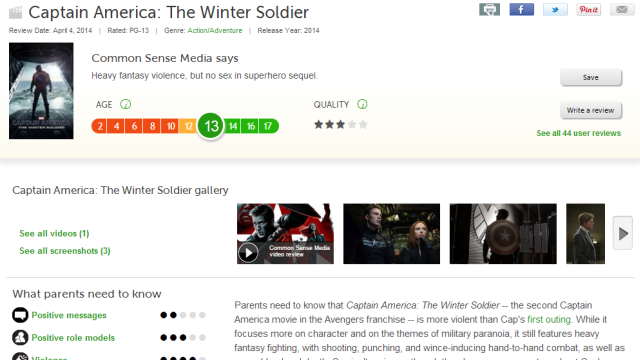 Web: Which movie is safe for your kids to watch? For that matter, which film you plan on watching with your parents isn’t going to have a scene that makes you feel awkward? Find out at Common Sense Media.

The site includes independent reviewers and experts talking about the content of each movie, highlighting elements such as abusive language, violence, nudity or other materials meant for adults. There’s also a rating based on parameters like positive messages, positive role models, violence, sex, consumerism, drinking, drugs and smoking. Putting together all of these and other aspects of the movie, different ages are given a rating for the movie: red is inappropriate, amber is a parent’s call, and green is appropriate.

Because of the detailed descriptions of the movie, it can also be reverse-engineered by teens and young adults to find out if a movie they are watching with their parents is going to have a sex scene (or worse) that’s going to make things awkward.

Common Sense Media covers other media types (including books, apps, games and music), but the movies section is much more developed, and the only one we’d recommend right now.