The Upside Of Inefficiency

In the last few days, I’ve heard New York City described as a tale of two cities: one city of people who were drastically impacted by Hurricane Sandy, and another of those who were merely inconvenienced by it.

I am fortunate: I live on the Upper West Side of Manhattan, which was minimally affected. Our kids were out of school for several days, but we never lost power and our apartment suffered no damage. We also own a car, which we filled with petrol the night of the storm, “just in case”. So when we received several emails announcing an effort to collect and deliver supplies to some hard hit neighbourhoods, we were prepared to help.

By the time I arrived at the Jewish Community Center in Manhattan, its lobby was piled high with clothing, food, toys, toiletries, blankets, torches and other necessities, all packed in black garbage bags. There were people to sort, people to pack cars and a leader who was sending people to designated distribution spots in the hardest hit areas.

They had already sent a hundred cars filled with supplies, and by the end of the day, they sent over a hundred more.

Isabelle and Sophia, my two oldest children, joined me to take part in the distribution effort. It took volunteers about 60 seconds to fill our minivan and send us on our way to Staten Island.

Then I got a call from a friend who told me not to go to Staten Island. The distribution centres were full, he said. Go to Far Rockaway instead.

As we slowly drove through Far Rockaway looking for distribution centres, we witnessed devastation of a kind I have never seen. Entire blocks of houses destroyed by fire, with only the front steps standing, leading to charred rubble. Sand and debris — including entire boats — strewn on the streets, left by receding waters. And mounds of discarded wood, furniture, toys, even walls piled high at the curbs for the sanitation department to pick up. Image by Randy Le’Moine Photography via Getty Images.

I simply could not believe that the people in these neighbourhoods had all the supplies they needed. And yet, here we were, a car filled with supplies but without a distribution centre to give them to.

I can’t quite explain the enormity of this mind shift except to say that with this realisation I shifted from an employee to an entrepreneur. I stopped doing what I was told to do and started doing what I saw needed to be done.

So we drove down a random street where we found a number of people clearing debris from their houses.

That’s where we met Mike and Kelly. Their just re-finished basement had flooded to the ceiling like a pool, the water level rose so high it completely submerged and totalled their two cars, and, after three asthma attacks from all the dust, they finally sent their son to stay with his grandmother in Westchester.

Yes, they told us, we could really use your supplies. And so could others on this street. So we all worked together to unload our car onto Mike’s porch where he said he would distribute things to his neighbours.

Mike and Kelly described the night Sandy came, the loud bang when the water broke through the basement wall. Kelly took the time to teach my kids about the ocean and the bay — how the water came from both sides and flooded everything. She talked about how they were sharing food with neighbours and trying to help each other in the clean up. And she gave my kids way more leftover Halloween lollies than I approved of. Image by Randy Le’Moine Photography via Getty Images.

As I heard about Mike and Kelly’s devastation as well as their courage, I felt the blessing of the organisational breakdown.

New York City is not two cities; it’s eight million cities. This hurricane affected each one of us in a particular way. And to reach across the darkened neighbourhoods, debris-strewn streets and waterlogged houses to hear those stories is a critical — and inspiring — step in this recovery.

Yes, food and clothing and blankets are necessary for survival. But so are the conversations, connections and sense of community that come from real people sharing with other real people.

Those are things we’re losing as we distance ourselves from each other in large organisations and efficient modes of communication — as our digital lives overwhelm our in-person ones. We don’t have to lose them — after all, organisations are made of people. But the more we act like employees, operating to get the job done as efficiently as possible, the less human we become. 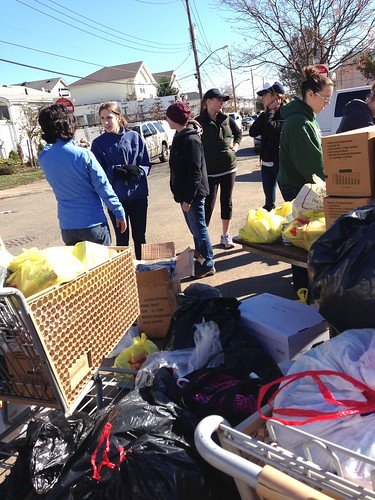 Sharing supplies and stories with neighbours is inefficient. Maybe Mike and Kelly will end up with things on their porch that they can’t use and can’t give away. Maybe they weren’t the people who needed the supplies the most. Image by David Berkowitz via Getty Images.

But our trip to Far Rockaway helped me see the usefulness of that inefficiency. How much better is it for a neighbourhood when one neighbour tells the others to come to his front porch and take what they need instead of signing up for necessities through a distribution centre?

At first, I’m embarrassed to admit, I’d had the thought: What if they keep it all for themselves? That’s precisely the mistrust that leads to — and emerges from — impersonal bureaucracies.

The truth is, maybe they will keep it all for themselves.

But I doubt it. Mike and Kelly are good people; that was clear from way they treated me and my kids. As soon as we arrived at their house, Kelly offered us some of their limited supply of bottled water. They’ll take what they need and share what they can.

As we drove back home late that night, we felt great. Not just because we helped out a neighbourhood that could use the help. And not just because we tapped into our entrepreneurial initiative, which we were proud of. But because we met Mike and Kelly and connected with them.

That, it turns out, is the upside of inefficiency.

Peter Bregman is a strategic advisor to CEOs and their leadership teams. His latest book is 18 Minutes: Find Your Focus, Master Distraction, and Get the Right Things Done. Read his other HBR posts here.

Title image illustrated by Dominick Rabrun. You can find his illustrations on his personal website or works in progress on his blog.