No, You Cannot Make ‘the Inside of Burrata’ With Mozzarella and Cream

Burrata is a beautiful thing. For the uninitiated, burrata is a cheese comprised of a tender shell of mozzarella, wrapped around a luscious mixture of mozzarella curds and cream. That inside mixture is also known as “stracciatella,” and it is what gives burrata an edge over mozzarella. I like to eat burrata with stone fruit or use it in a caprese, though we are still a few months from having access to in-season peaches and tomatoes. 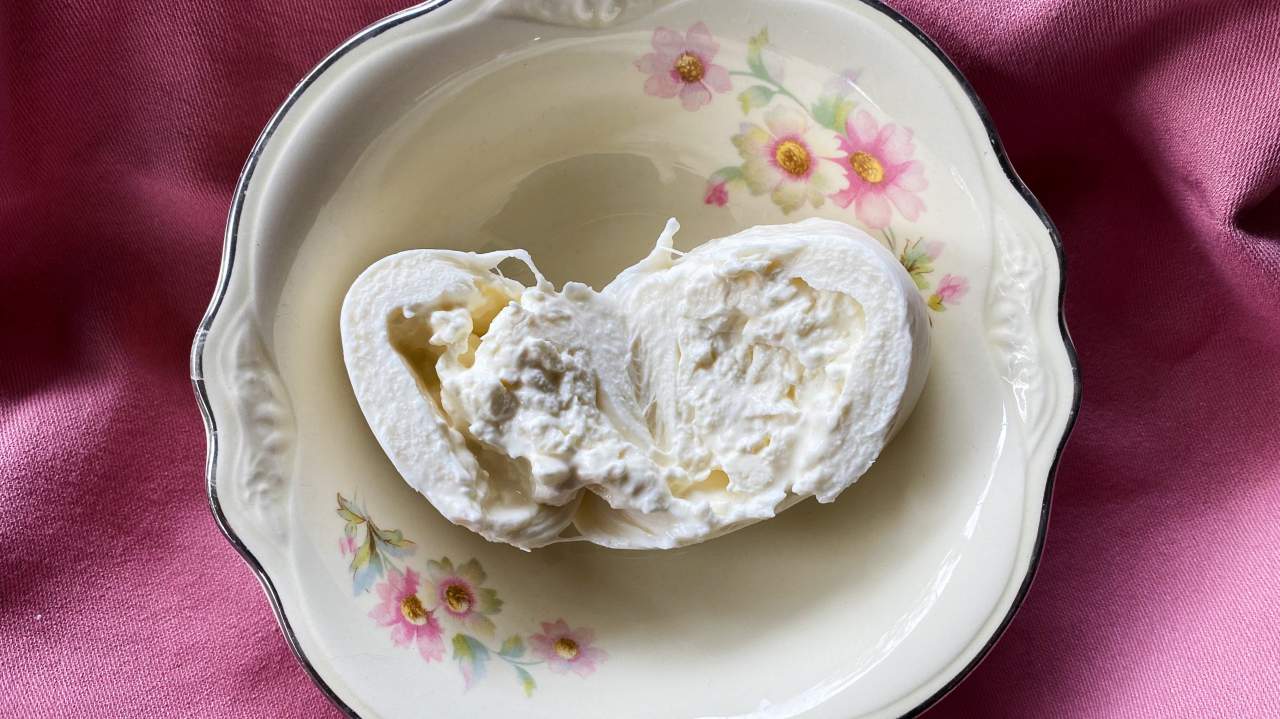 This is burrata. (Photo: Claire Lower)

There is an Instagram video making the rounds that claims you can make stracciatella by combining store-bought mozzarella with heavy cream. That is, unfortunately, not true.

In the video, MacKenzie Smith of grilledcheesesocial tears some mozz into tiny pieces, covers those pieces in heavy cream, adds a little salt, then lets the cheese absorb the cream for “at least half an hour.” Smith then spreads the mixture on bread, drizzles on some truffle oil, and seasons it with pepper.

I did that same thing — sans truffle oil — and can tell you that this particular hack does not result in stracciatella, because that is not scientifically possible.

The combination of cheese and heavy cream does not taste bad, because how could it? It’s cream and cheese. You can put it on bread. It tastes just fine, but it is a far clunkier, heavier product than true stracciatella. Turning store-bought mozz into stracciatella would be like turning butter into whipped cream; it’s all made of the same stuff, but both butter and mozzarella have undergone chemical and structural changes that cannot be undone. This is one cow that can’t be un-milked, so to speak.

The difference between mozzarella, burrata, and stracciatella

As I mentioned earlier, burrata has two components: mozzarella and stracciatella. According to allrecipes, making burrata starts out almost exactly the same as making mozz:

Burrata starts like any cheese, with cultures and rennet which are added to warm, fresh cow’s milk. As the milk starts curdling, the whey separates and is drained off. Next, boiling water is poured over the curds, which are then stretched, essentially making mozzarella.

Additional, fresh curds are then added to the inside of the mozzarella, along with cream, and the mozzarella is wrapped around that mixture. The curds have a streaky, torn appearance, hence the name “stracciatella,” which means “rag” in Italian. (And the curds do kind of look like torn, stretched out rags, especially if you squint a little.)

Mozzarella cannot go back to being curds. The texture of the former is much denser and chewier than the latter, and pouring cream on top of if will not fix that.

But does it taste good?

The mixture of cream and torn mozzarella does, in fact, taste good. It is much heavier and clunkier than true stracciatella, but I ate it on bread with some olive oil and pepper and was not mad about it. Stracciatella is delicate, tender, and delicately creamy, and this “hacked” version is bouncy, a little chewy, and swimming in heavy cream. It’s a bit too rich to eat very much in one sitting, but that’s not necessarily a criticism.

I don’t understand why you wouldn’t just buy burrata, however, as trying to DIY it doesn’t really save you that much money. To make this ersatz stracciatella, I bought a three-dollar ball of mozzarella (and it was deeply on sale) and a two-dollar half-pint of heavy cream. That’s five bucks, and you can get burrata for six. It may not be the highest quality burrata, but it’s still burrata, which means it will have real stracciatella on the inside.