Can I Learn to Skateboard In a Month?

When I committed to skateboarding in June, I had ambitions for it to last longer than my one-month Lifehacker Fitness Challenge. I mostly kept my goals to myself, though, as not to jinx my probability of getting through the month successfully. Even so, comments came in from older skaters sharing their experiences with learning or getting back into it, most of which were trying to help me define “success” in the first place.

For me, success would mean one concrete goal of learning a new trick, and one abstract goal of having fun, learning to love skating whether I’m landing tricks or not.

How many skateboarding tricks can you learn in a month?

I spoke with Yuri Cruz, author of Kickflips and Chill: Your Inspirational Guide to Becoming an Excellent Skater, to get a better idea of what makes for a reasonable set of goals. I had already learned to ollie thanks to a few rogue skaters who took pity on my efforts and offered the advice to practice while holding a fence. It was the most useful skateboarding advice I had found, and I learned to land some modest, stationary ollies quickly, and graduated from the fence in about a week.

“As a beginner, I found that shuv-its were a good go-to, then pop shuv-its,” Yuri said. “Just spending time on your board and doing things besides flip tricks can be really fun and helps to build board control and confidence.” Much of the advice I heard from skateboarders revolved around “building confidence” and the “just getting used to being on the board” parts, which I take as a polite way of saying what most people don’t want to admit: No advice will help me as much as doing it for a long time, like they all had done.

A skateboarder I met in Brooklyn’s Cooper Skate Park, Christopher “Smokey” Jones, echoed the sentiment. “You want to build up confidence,” he said, telling me not to worry about the hard falls he saw me take that afternoon. “Everybody gets bodied out here.”

When I asked him for a specific order of tricks to learn, though, he obliged. “Learn how to ollie off of stuff first,” he said. “And then ollie up on a ledge. Then a frontside 180, then backside 180s. When you learn all of that, start doing shuv-its, and then you can start doing kickflips and all that, later on.”

Of course, the number of tricks someone can learn in a month depends on the individual and how often you skate, but I managed to learn two — ollies and shuv-its — that I can land reliably enough to claim them as wins within a month. 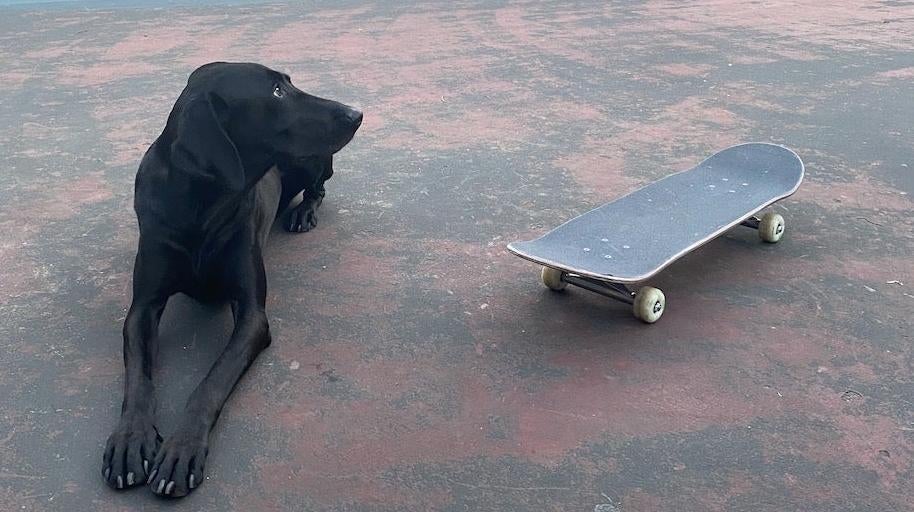 How to stay motivated to keep skating

It’s easy to stay motivated when the rewards come quickly, but it became harder when I felt diminishing returns in my rate of improvement. In the beginning, I was thrilled when I was able to ollie, but getting to the next level — which I’m defining for myself as a frontside 180, given Smokey’s advice — has been a lot slower.

“There are times that I just couldn’t get past a tough spot to land a trick and I would get so frustrated,” Yuri told me. “I’ve literally put a trick down and revisited it after a year. But no one wants to hear that when you have a goal in mind.”

She was right, I didn’t want to hear that, but what she offered next did help:

To help with motivation, if you have the ollie or any other trick, have fun with that ollie, make it the best ollie you can. Learn to ollie over things, go a bit faster and ollie, learn what tweaking an ollie is and how to do it. Have fun with it and build upon things you already have, because you can always make something even better or more unique in skating. It can help put the fun back into skating.

She also recommends watching skating videos, including your own, where you can learn from watching the mechanics in slow motion. I took to watching Betty on HBO for motivation — much easier — but I’ve also gone down the rabbit hole of skating content on YouTube and Instagram where I found countless people of colour in the community that I had once only known as suburban and white. It wasn’t a mistake that I gravitated towards Smokey and Yuri to hear their experiences, or a show like Betty that features a diverse cast of women navigating a sport that could be unwelcoming to them. Watching their success has been as motivating as landing my first shuv-it — maybe even more so.

How long does it really take to learn to skateboard?

One of the hardest things about “learning” a skill without standard benchmarks is the imposter syndrome that comes with not knowing where you stand. If you wanted to learn how to solve a Rubik’s Cube, you’ll know when you’ve gotten there, but “learning to skateboard” will naturally mean different things for different people.

For Smokey, who’s now 48 years old and had been skateboarding since he was twelve, being a “skateboarder” meant going out there and doing it with the goal of getting just a little bit better. I found Yuri’s milestones extra helpful when judging my own pace of growth, since I could try to benchmark some of my progress against hers: “I don’t remember how long it took me to tic-tac or to do my first ollie, but I saw that I learned to ollie over things about four months into skating, and I learned to kickflip six months into it.”

Did I learn to “love” skateboarding?

Despite how bad I am at it, going outside with my board has been the purest joy of my summer. There’s a freedom in being bad at something and just having fun with it — something that tends to be uncommon with adults, particularly goal-oriented ones like me who pride ourselves on being good at the things we do.

“Enjoy where you are and have fun with it,” Yuri told me. “If you’re a goal-oriented person like I can tend to be, remember to go back to making it fun. I was the kind of person who kept saying to myself, ‘once I learn this trick, then I’ll be a real skater,’ but after I would learn that trick, I would want to learn another trick and say the same thing.”