An Age-By-Age Guide to Teaching Kids About Money

From figuring out how to count change, to the give-save-spend rule, to the pitfalls of credit cards and debit cards, our kids have a lot to learn about money before they go off on their own. It would be great if personal finance was taught in school, but it rarely is, so it’s our job as parents to equip them with the knowledge and practice they need to develop a good relationship with money.

Here’s a guide for the lessons to impart and the skills to help them develop — starting when they’re just two or three years old. 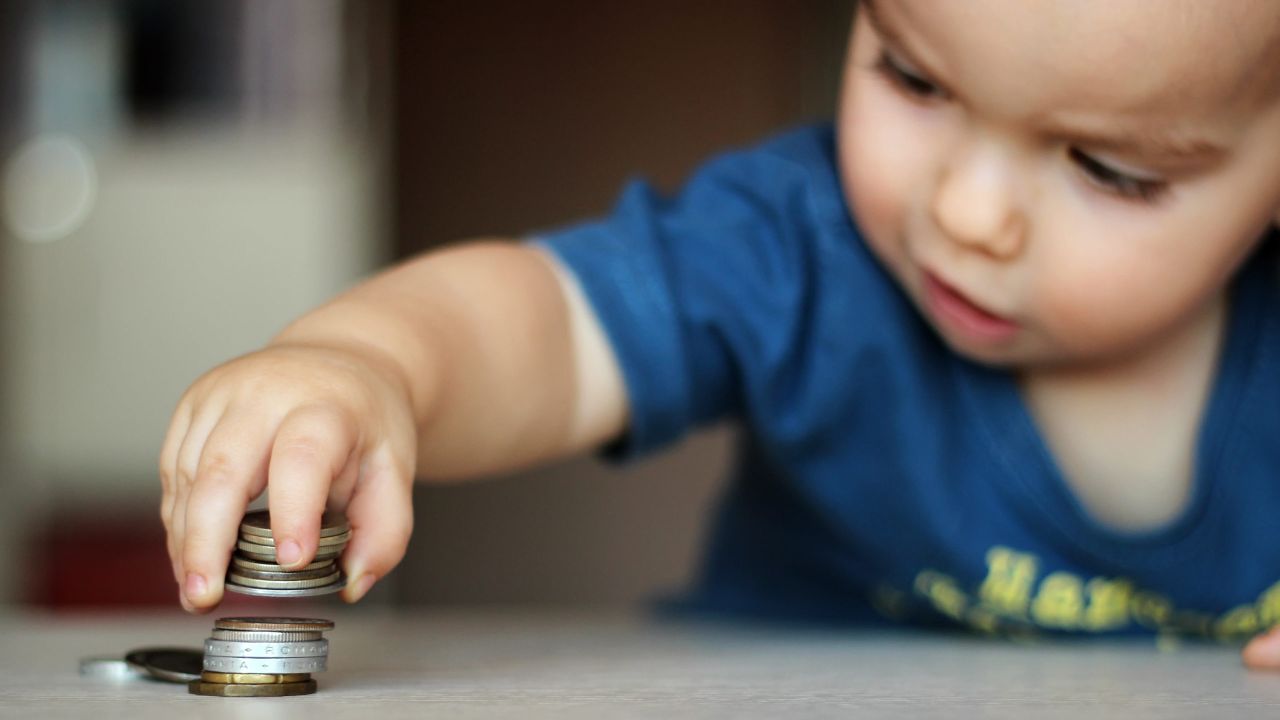 It may not seem like a toddler or young preschooler is ready to learn the ins and outs of budgeting, saving, and investing (they’re not), but they do like coins. A two-year-old won’t be able to grasp the fact that a penny is worth less than a dime — nor will they care. But you can begin to introduce coins to them by letting them sort them or trace them, naming them as they do, so they start to become familiar with what each coin is called.

(Make sure you’re supervising them whenever they have coins so they don’t swallow them — and it’s a good idea to wash their hands afterward.)

Around age three, they might be ready for a toy cash register so they can begin “playing store.” They’ll love the buttons, the dings!, and the play money, and it will start to reinforce that money gets exchanged for food or other items — and that some things are more expensive than others.

They might also want to start saving a bit of the real stuff of their own. A piggy bank is great, but if you want them to get even more satisfaction from saving early on, try letting them save coins or bills in a clear plastic or glass jar, so they can actually see the money accruing. 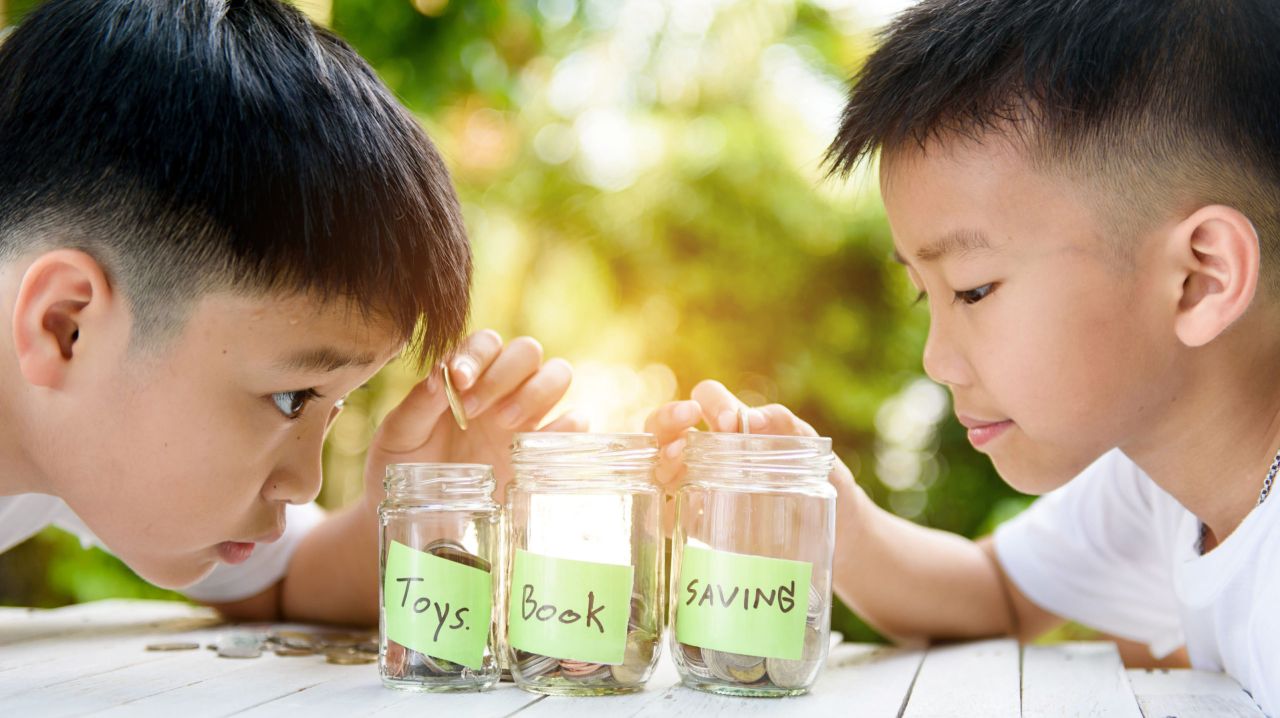 By the time they’re approaching or entering kindergarten, they’ve probably started collecting some decent pocket money from birthdays, holidays, or a small weekly allowance. This is when we can start to teach them the three basic things we can do with money: save it, spend it, and give it. You might set up three jars for them so they can more easily divvy up their money into the save, spend, and give categories.

We’re not talking about a lot of money here, so how they divvy it up really isn’t the point — let them decide that, as long as they’re putting something into each jar. Maybe the “spend” jar gets used to buy a candy bar in the grocery store check-out aisle or a new pack of Pokémon cards. The “save” can be used for a special toy they want to splurge on. And the “give” money can be pulled out when those collection tins pop up around the holidays or to purchase a small gift for grandma’s birthday.

Introducing the idea of saving, spending, and giving money now, in its most basic form, will lay the foundation for how you talk to them about money in the years to come. 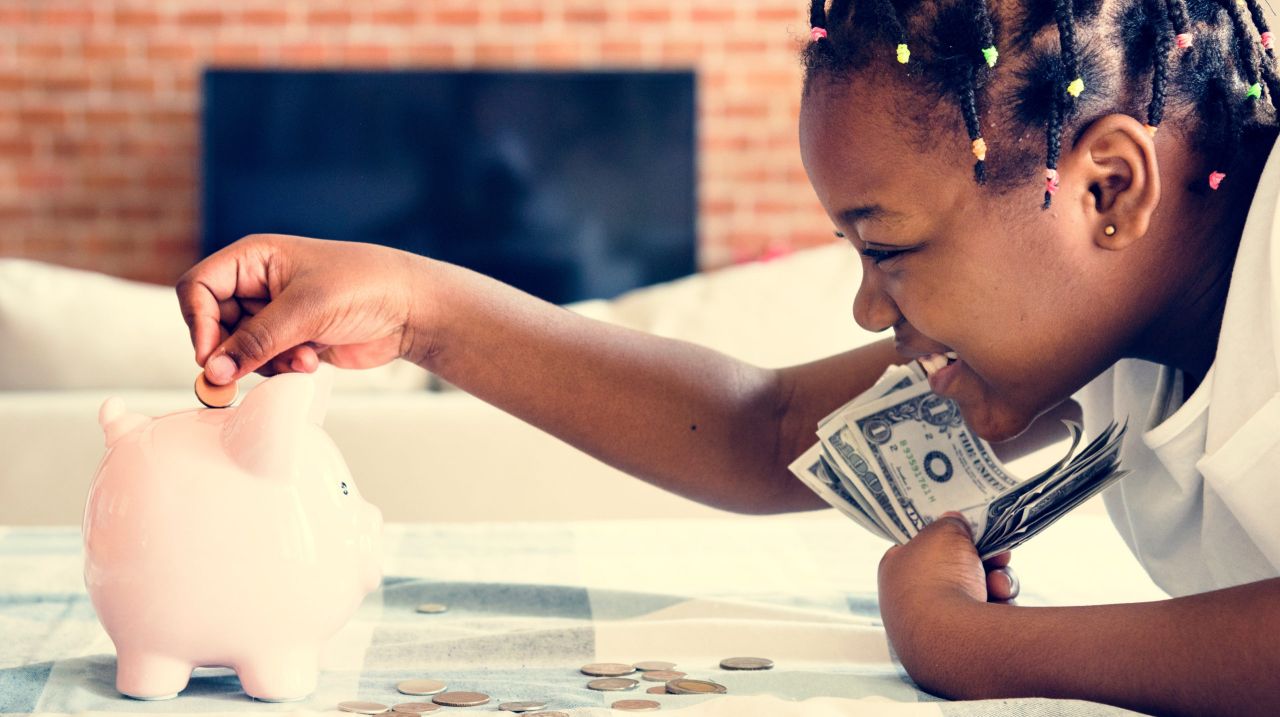 By this age, kids are starting to develop a deeper understanding of how money works. They understand that grown-ups have jobs to make money and that much of what they see around them — their home, the family minivan, their Friday night pizza dinner — is paid for with money. You can start to explain to them the difference between using cash, a debit card (cash that you keep at the bank and the bank then sends to the store), and a credit card (you borrowed that money and will have to pay it back to the bank later).

This is a good age to start letting them attempt to make their own simple purchases in a store. They’ll need your help with counting out the correct amount or with prompting when it’s the right time to hand over the money, but it’s good practice that will build their confidence about how the process works each time they do it.

If they want to earn a little money being entrepreneurs themselves for the first time, these are the prime lemonade stand years. They’ll probably need your help (making the lemonade and counting out the change), but setting up a lemonade stand is a great way to teach kids about marketing a product (with a handmade sign) making the sale (it’s nice and coooold!), and earning their own money.

If they don’t already have a bank account of their own, this is a great age to open one up. They may have some money they keep at home in their jars or piggy bank, but it’s also good for them to get accustomed to the idea of stashing some money away safely and watching it grow as they add to it over time. Take them to the actual bank to open the account (they will feel Very Grown Up), and take them back, if you can, each time they want to make a deposit. (Actually depositing the money themselves really drives home the idea that they are adding to their own little pile of savings.)

If a physical visit to the bank isn’t feasible each time, you can do what I usually do with my 10-year-old: Have them hand you the cash and then watch as you go on your mobile account and add the money to their account from your account. They see the number climb instantaneously, which is usually satisfying enough. 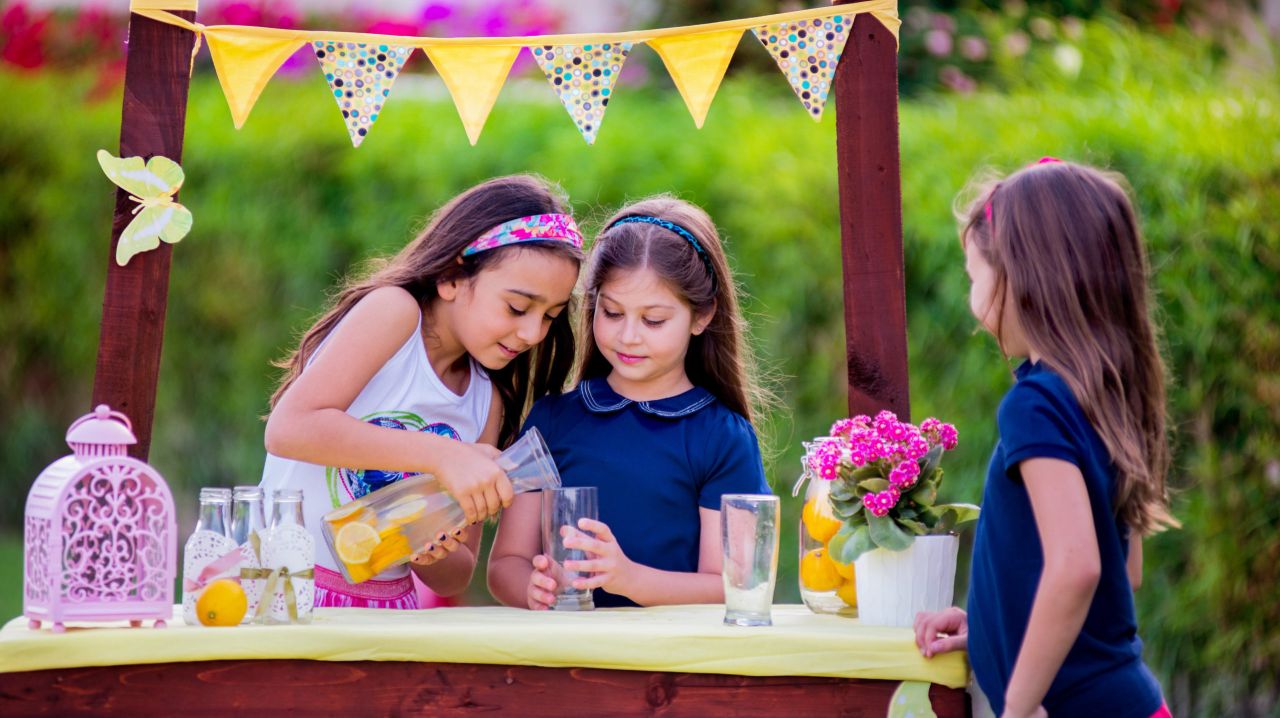 In my experience, this is the age that kids really get into the concept of earning money themselves, if they haven’t already. They may be running their own lemonade stand (or neighbourhood franchise?) by now or thinking of other things they could sell, whether it be personalised drawings, hand-drawn comic books, or colourful painted rocks.

My pre-teen nieces once set up a “store” full of their original artwork at my parents’ house, and you better believe we all took turns walking through and purchasing a slew of treasures — they even made personalised bags and receipts, which was a nice touch. We got some fun stuff to take home, and they made a hefty profit. (Their aunt, it turns out, will pay top dollar for their creations.)

If ever you’re going to have a yard sale, this is when they’ll be the most into it — and it’s a great way to teach them about determining the value of something, organising and displaying items for sale, and negotiating with a buyer. Enlist their help and split the profit with them (or divide up the profit into piles for the family as a whole to spend, save, and give).

At this age, you should start talking to your kids about how you decide what you spend money on. “Being able to afford it” and “choosing to spend money on it” are two totally different things, and it’s at this age that kids can really start to grasp why you prioritise spending in one area over another. They can practice this themselves when you take them to the store with $25 of birthday money burning a hole in their pocket. They might have to decide whether to buy the small LEGO set they can afford or save up a few more weeks’ worth of allowance to get the bigger, more impressive set — or whether to spend that money on one big toy versus several smaller items.

This is also a good age to introduce the concept of longterm savings for bigger items. Around age nine, we started opening up our son’s monthly university savings statements in front of him (I get the paper statements mailed to me expressly for this purpose). He’s maths-minded and interested in anything numbers-related, so each month, we talk about how much has been saved, how much it increased from the previous month, and “how much college that will get him,” which is always his follow-up question.

I remember my own parents doing something similar with me, and not only did I appreciate that they thought I was mature enough to share it with me, it also was a low-key, easy way to introduce some rudimentary discussions about investing. 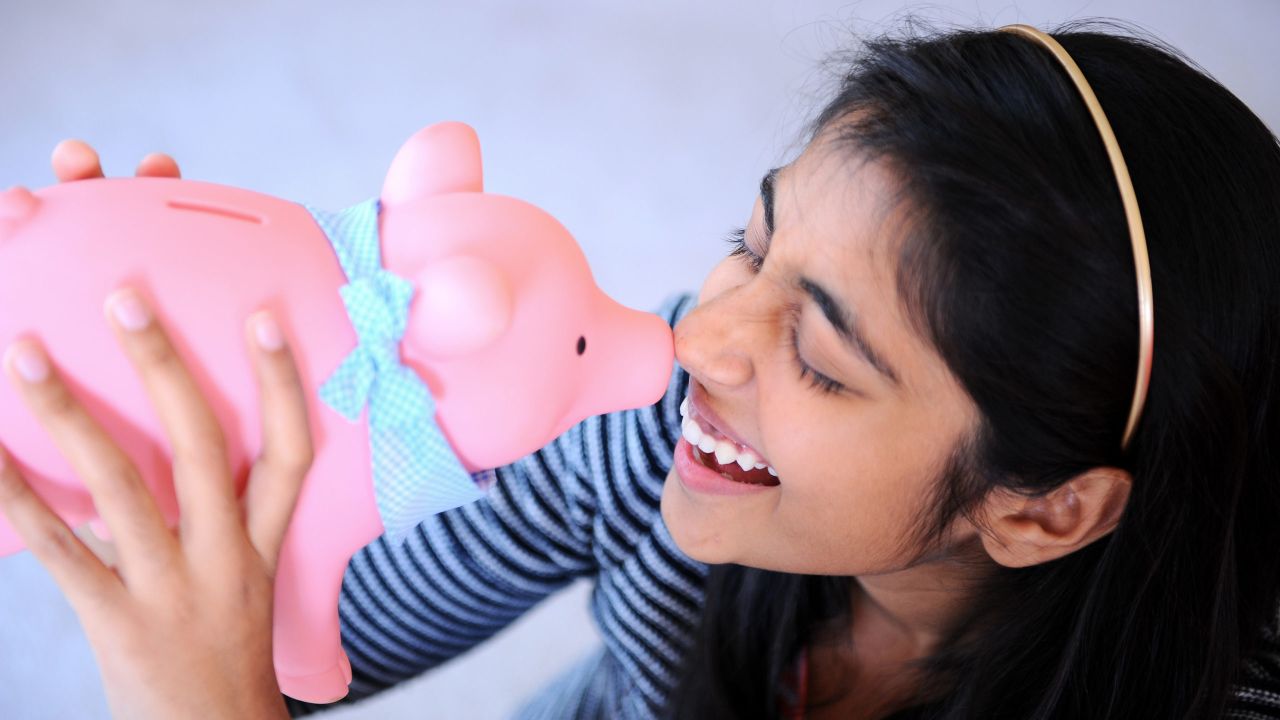 By the time they’re teenagers, they’ll probably be looking to make a little extra money in addition to any allowance they’ve been earning or whatever they’ve been banking from the products they’ve been selling in the front yard. Some teenagers will wait until they’re old enough to start working at the local fast food restaurant, but others will offer themselves up as the go-to neighbourhood babysitter, or they’ll grab a shovel after a blizzard and take their snow-removal services door-to-door.

This is the perfect age to help them develop some different long-term savings goals, whether it be saving for a new gaming system, smartphone, computer, or even their first car. You should also be talking about what you can (or are willing) to pay for when it comes to university, so they’ll know what part they’ll need to plan for.

Eventually, our kids are going to graduate to debit cards and credit cards, but I’d suggest you keep them using cold, hard cash for as long as possible. They are more likely to develop good money habits if they feel that little bit of pain when they hand over all that hard-earned lawn-mowing cash for the pair of sneakers they’ve been coveting. You feel a purchase more when this type of exchange happens — I give you money, you give me shoes — and their wallet feels a bit slimmer afterward.

On the other hand, when you pay with a card — I give you a card, you give me shoes, and you give me the card back — the immediate impact isn’t felt, so the impulse purchases may soar.

When it is time for a debit card or credit card, shop their options together so you can compare the different features and fees to find the one that is the best fit for them.

And if you haven’t already, when it’s time for them to head off to college (or whatever they plan to do after high school), help them plan out their first monthly budget so they immediately get into the habit of tracking what is coming in and what is going out.