What Does it Mean When Yelp Flags a Business as Racist?

When I’m looking for somewhere new to go to secure any given service, I turn to Yelp. In addition to giving me a read on a business’ overall quality, I can also find out if the business is terrible — as in, run by terrible people, not having crappy service. (Though the two tend to go hand-in-hand.) Yelp has plans for a new policy that will make this even easier: The company will begin alerting users if a business is accused of racist behaviour.

I don’t always agree when Yelp jumps into a business’ listing to try and prevent or explain “astroturfing,” which is what happens when the story of a business doing something unpleasant is picked up by social media. For example, if the business’ owner is giving a lot of attitude on Twitter. This can prompt people who have never been its customers to jump onto Yelp and leave reviews that tell the world — in all kinds of creative ways — how horrible the business is.

However, I’m completely fine with the internet piling on when a business is acting deplorable at a level far above “someone made me a crappy burger.” That includes when a business or its employees act in a way that’s sexist, racist, bigoted, or anything that rises to that level. Though it’s more impactful when people who have actually had a terrible experience talk about it on Yelp, rather than random internet people, sometimes you need to give a little extra gusto to get results.

Everyone should do their part to jump into the fray when there’s demonstrated proof that a business or its employees have acted in a racist manner. That’s because if enough of these reviews catch Yelp’s attention, the company might now flag the business and provide an explanation of what has been happening:

“Yelp’s User Operations team already places alerts on business pages when we notice an unusual uptick in reviews that are based on what someone may have seen in the news or on social media, rather than on a first-hand experience with the business. Now, when a business gains public attention for reports of racist conduct, such as using racist language or symbols, Yelp will place a new Business Accused of Racist Behaviour Alert on their Yelp page to inform users, along with a link to a news article where they can learn more about the incident.”

Yelp will visibly alert users when it notices an influx of accusations of racism concerning a business or anyone associated with it — or, for that matter, if the business becomes a target of racism. These alerts might look something like this: 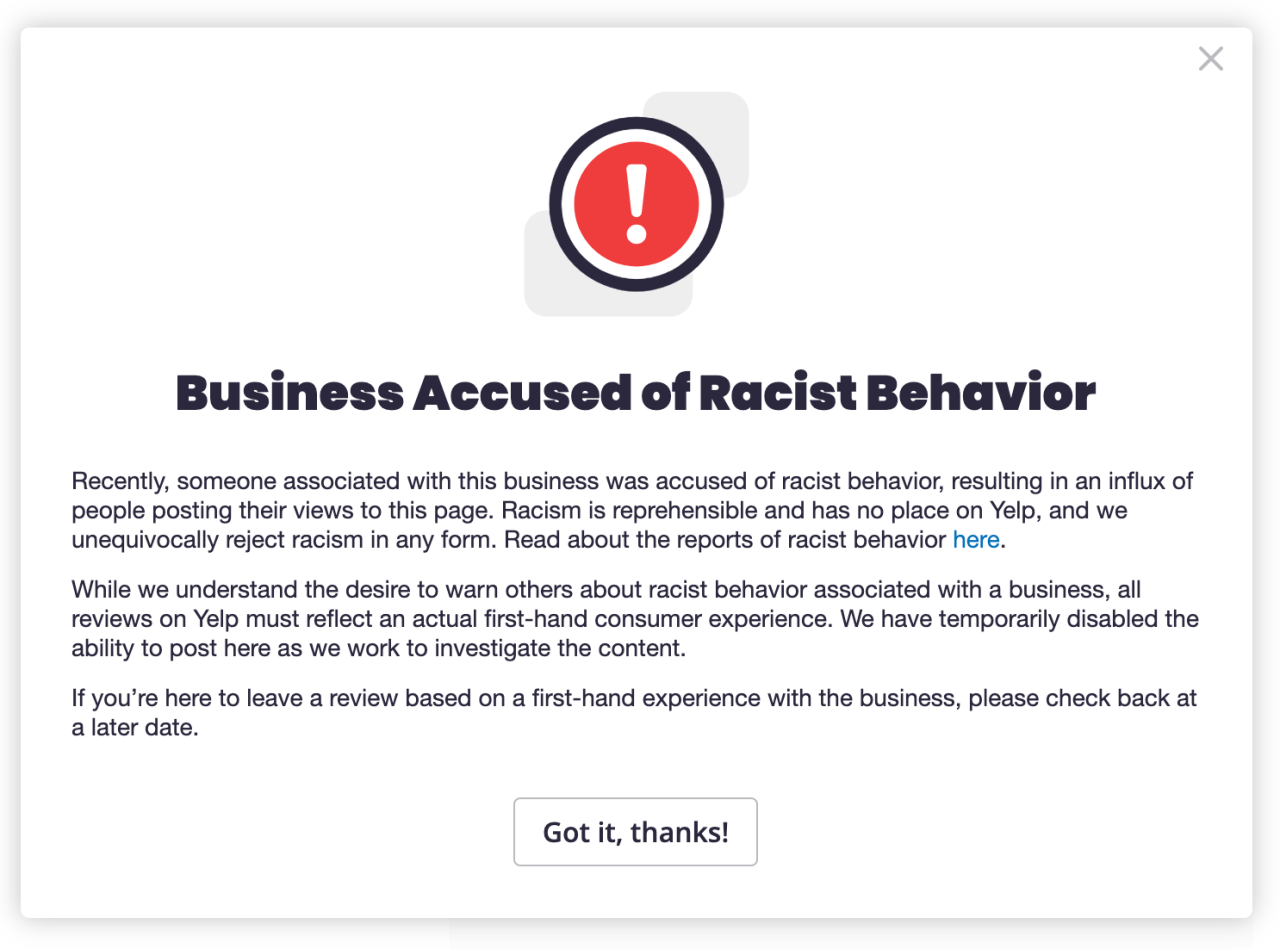 This all sounds like a bit of a cop-out on Yelp’s part, since it’s also in the company’s interest to keep businesses from feeling like they’re getting dogpiled “unfairly.” Again, I have no moral issue with people jumping in to a Yelp page to talk about the shitty, racist actions of a business or its employees. And perhaps this is the kind of activism we need to see more of, because it gets Yelp’s attention. The company can then investigate the matter and provide more official links to inform users about the situation.

In other words, dogpiling reviews — even if they’re from people who have never experienced a business’ crappy actions themselves — can help the truth shine through. It’s a crude technique, but it’s certainly effective at getting an official response. And that’s something your average Yelp user is more likely to believe, I wager, than seeing a bunch of reviews that say “fuck racists” on a business’ page. It’s unfortunate the latter isn’t enough nowadays, but that’s 2020, folks.

Of course, the flip side is true, too. I also see a future where Yelp’s “anti-racism” tools are misused by incensed people to go after businesses that support movements they don’t like, such as Black Lives Matter.

Found one that needs to be reported! @yelphttps://t.co/7TERfg6siH

And here’s where we get into a bit of a mess: Yelp remains the sole arbiter of how to handle these issues on its service, and I — and many others — aren’t always convinced it does the best job.

A few days ago I reported a review on Yelp that called an employee of a restaurant a “bitch.”

Yelp decided not to remove the review because they “allow reviewers to tell their stories in their own words.”

I don’t understand this position. pic.twitter.com/oNnBjzdInN

Still, don’t get discouraged. Yelp’s moderators are hardly perfect, but that shouldn’t stop you from calling out terrible behaviour when you experience it — or see it in another Yelp review. And when there’s obvious proof that a business was doing its best to put down others because of their ethnicity, jump in there. Force Yelp to sort it out, or else it might never notice.