How to Block a Song You Hate on Alexa

Excerpt from my pandemic diary, day 132: “The kids asked Alexa to play “˜Roar’ 53 times today. I can feel my sanity slipping. I fear what I may do if I cannot make the Katy Perry stop.”

If this situation sounds all too familiar to you ” or if you’re just sick of asking Alexa to skip a particularly annoying song on your favourite playlist ” you’re in luck: There are a few different methods you can employ to keep your Amazon smart speaker from playing a song you hate ever again, including voice commands and Alexa’s “Routines” functionality.

Before we jump in, a caveat: while you can ask Alexa to refrain from playing a song you don’t want to hear, this functionality as described below only works with Amazon Music, which is Alexa’s preferred music service by default (obviously). If you prefer Spotify, YouTube Music or another service, you’ll have to explore their own service-specific song-skipping settings.

If you do use Amazon Music, and you’re trying to block a song from playing when it comes up on a playlist you’re listening to (or a broad selection of similar playlists), you can do so simply by telling Alexa you don’t want to hear that song again. When the song comes on, simply say something like “Alexa, never play this song” or “Alexa, I don’t like this song.” Alexa will register your distaste and should, in theory, skip over it next time it encounters it on a playlist.

This is an imperfect solution, however: You may find you have to voice you displeasure a few times if the song is on multiple playlists you listen to and said playlists are different enough that Alexa doesn’t classify them as similar. Also, it doesn’t seem to work consistently if you’ve asked Alexa to play songs by a particular artist; Alexa will seem to comply with your request, but in my experience the song might still come up next time your kid yells “ALEXA PLAY PERRY GRIPP!” at the smart speaker (to use a totally random example). If you want a more surefire way to block a song, try…

To block a song using routines

If you’ve never before explored Alexa’s rather robust “Routines” functionality, you should check it out. You can use it to pre-program a whole host of actions you want Alexa to perform ” including preventing it from taking song requests you’d rather she reject. If you want to stop Alexa from playing a particular song (or even a particular artist) you can create a routine that will trigger a different action when someone asks to hear a song on your “no no” list.

Here’s how to do it: 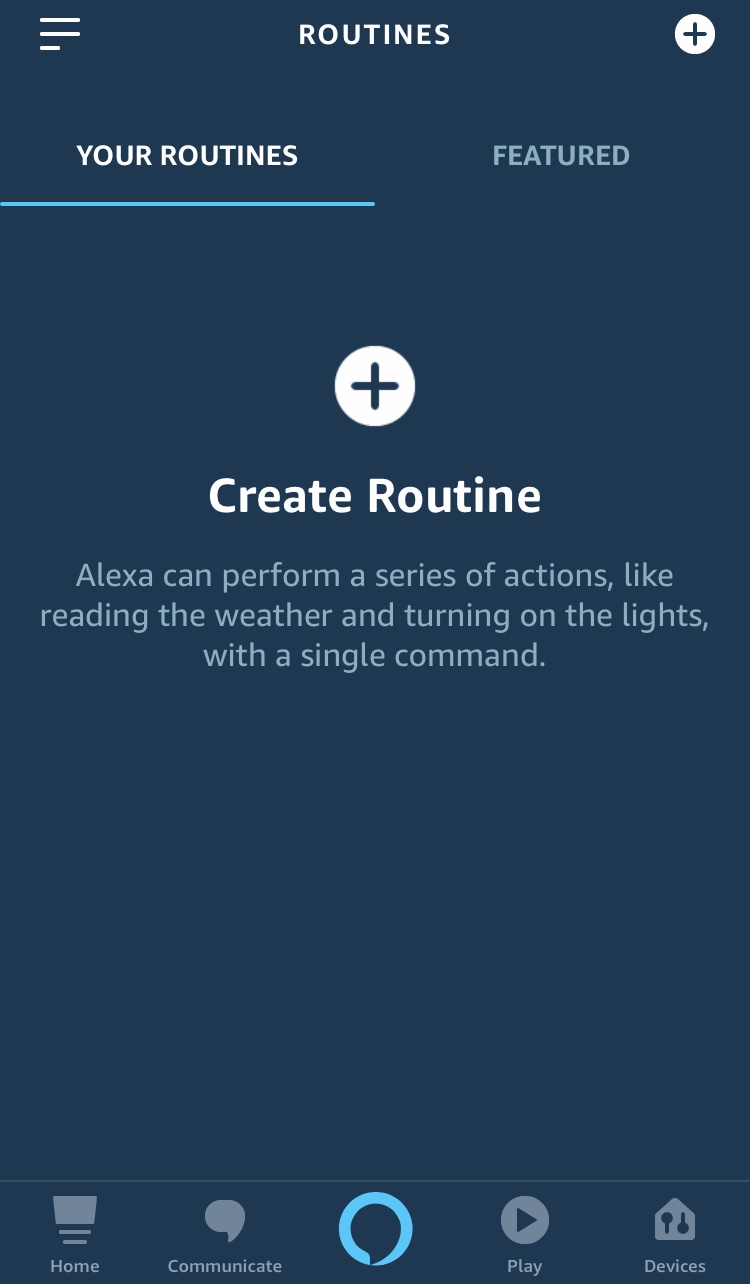 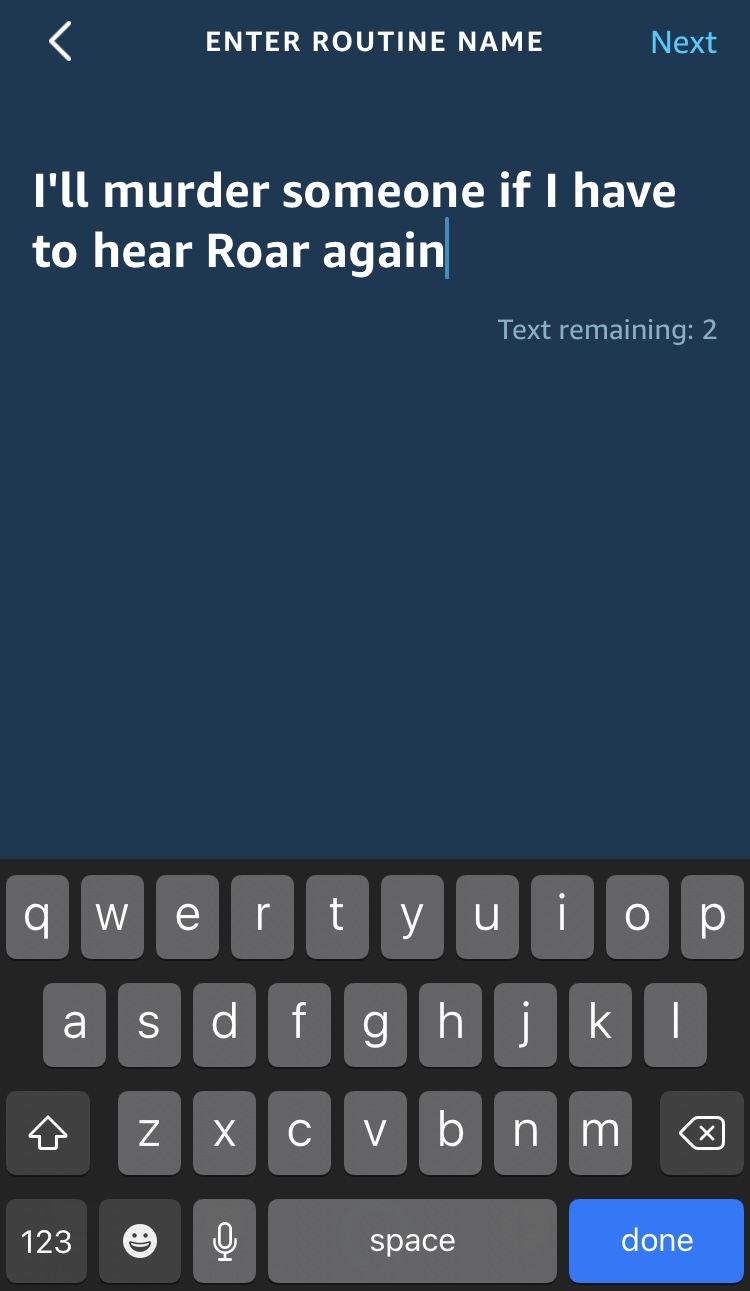 2. Tap “Enter routine name” and give it whatever name you like (in this instance, “Block [song name]” probably makes sense, but you can get more creative if you want). 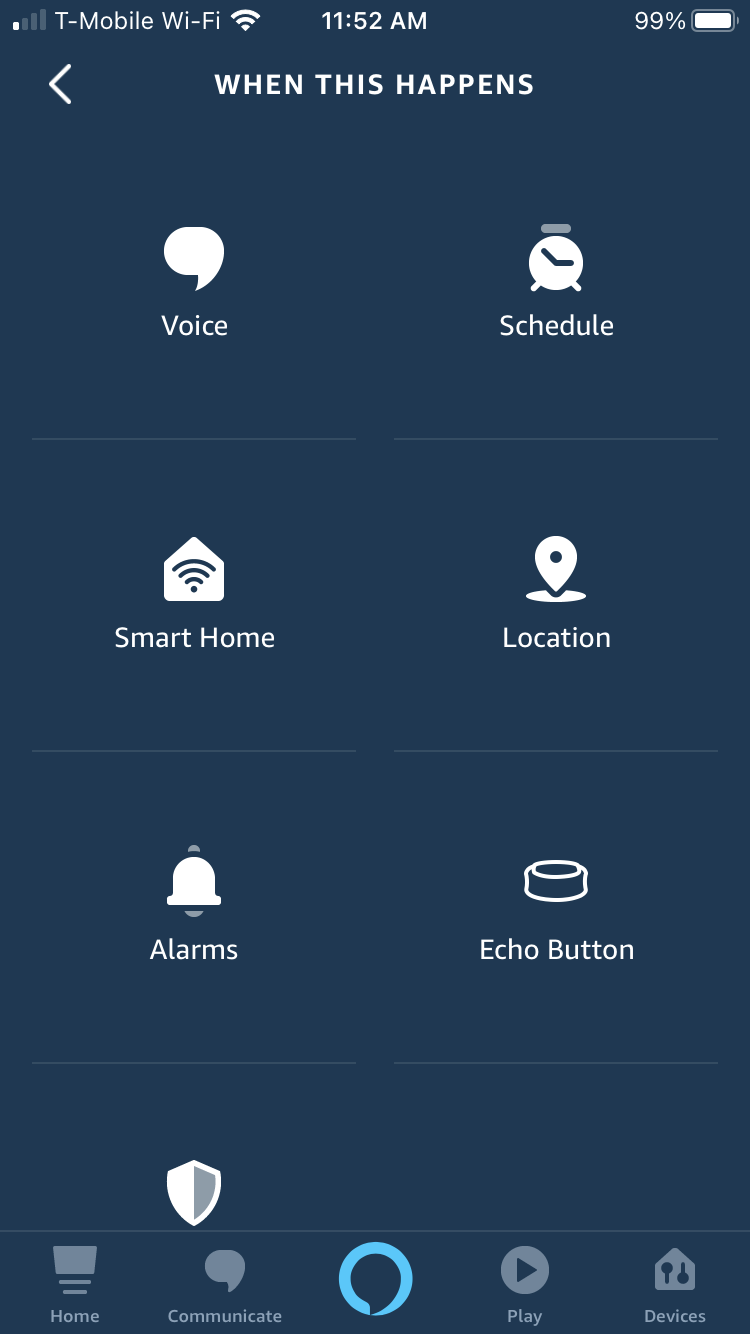 3. Tap “Next” and thenÂ “When this happens”; Alexa will open a menu of different functions. You want to select the “Voice” icon. 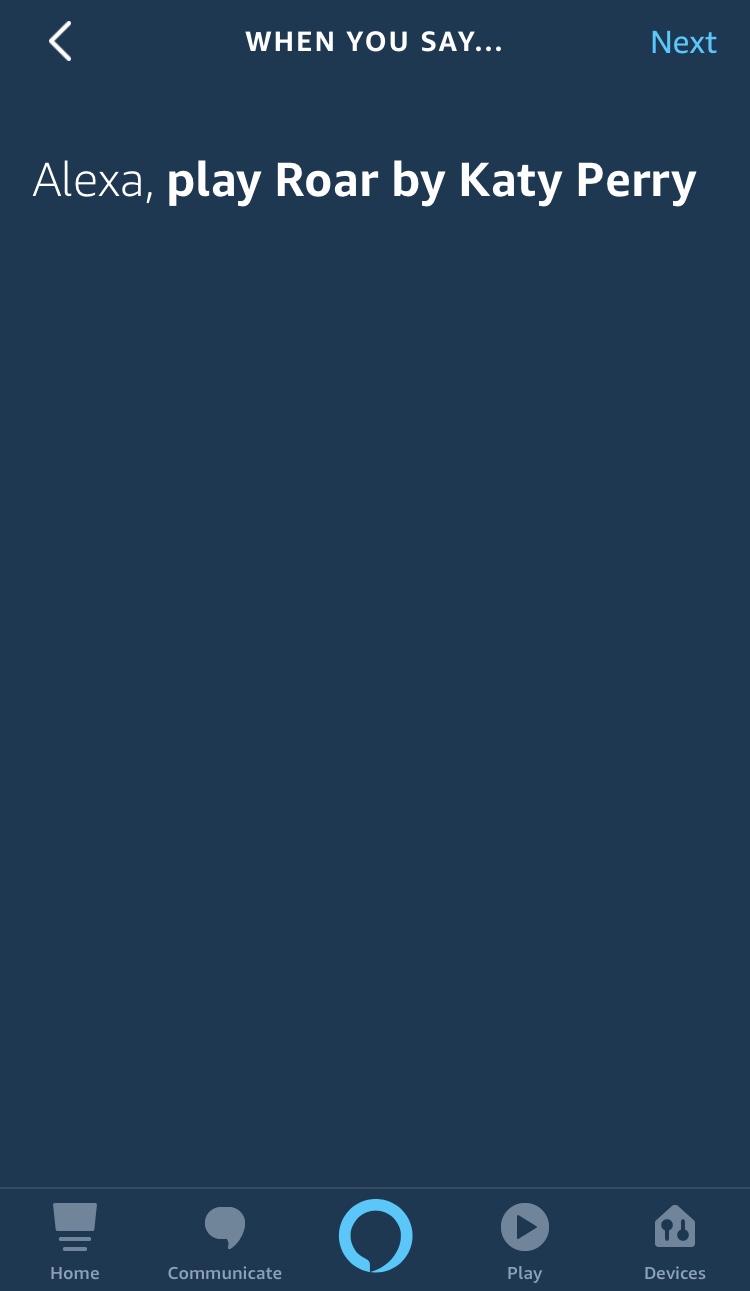 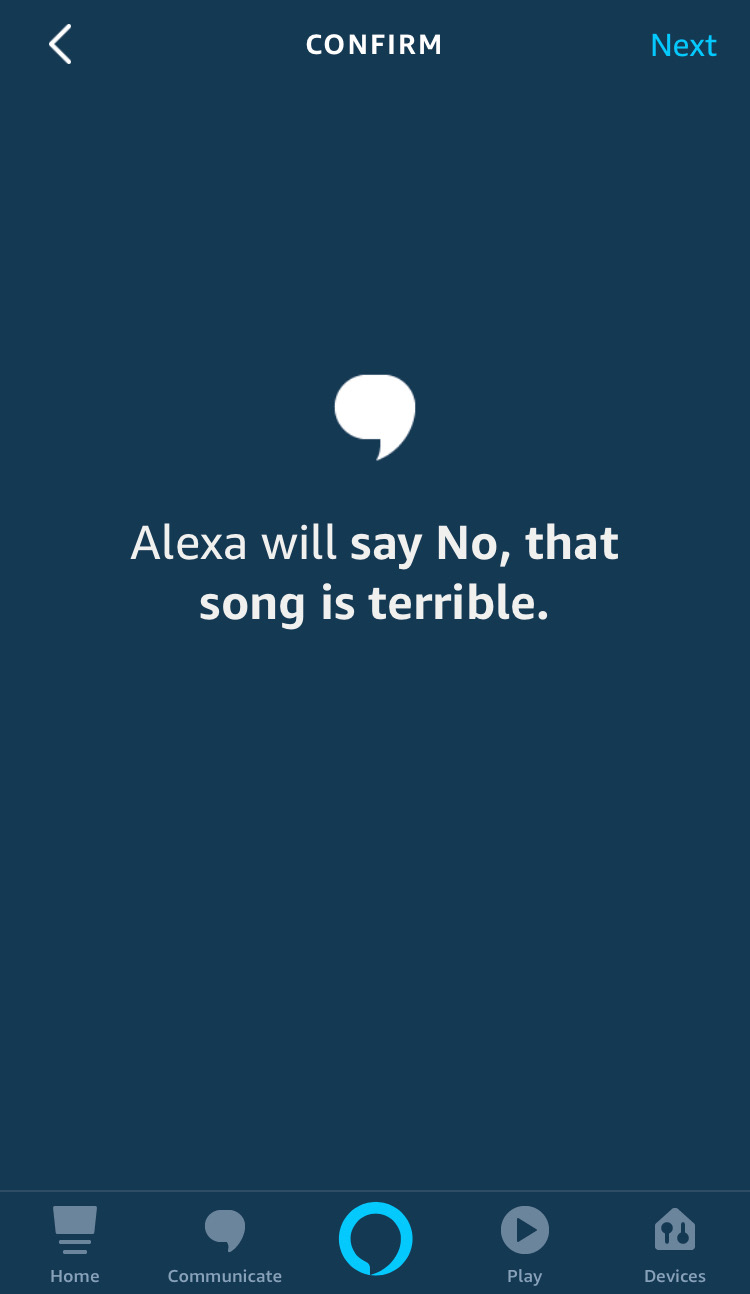 5. Tap “Add action,” then “Alexa says,” then “Customised.” You can now type in whatever you want Alexa to say instead of playing the requested song (some light trolling might be in order?) and tap “Next.” 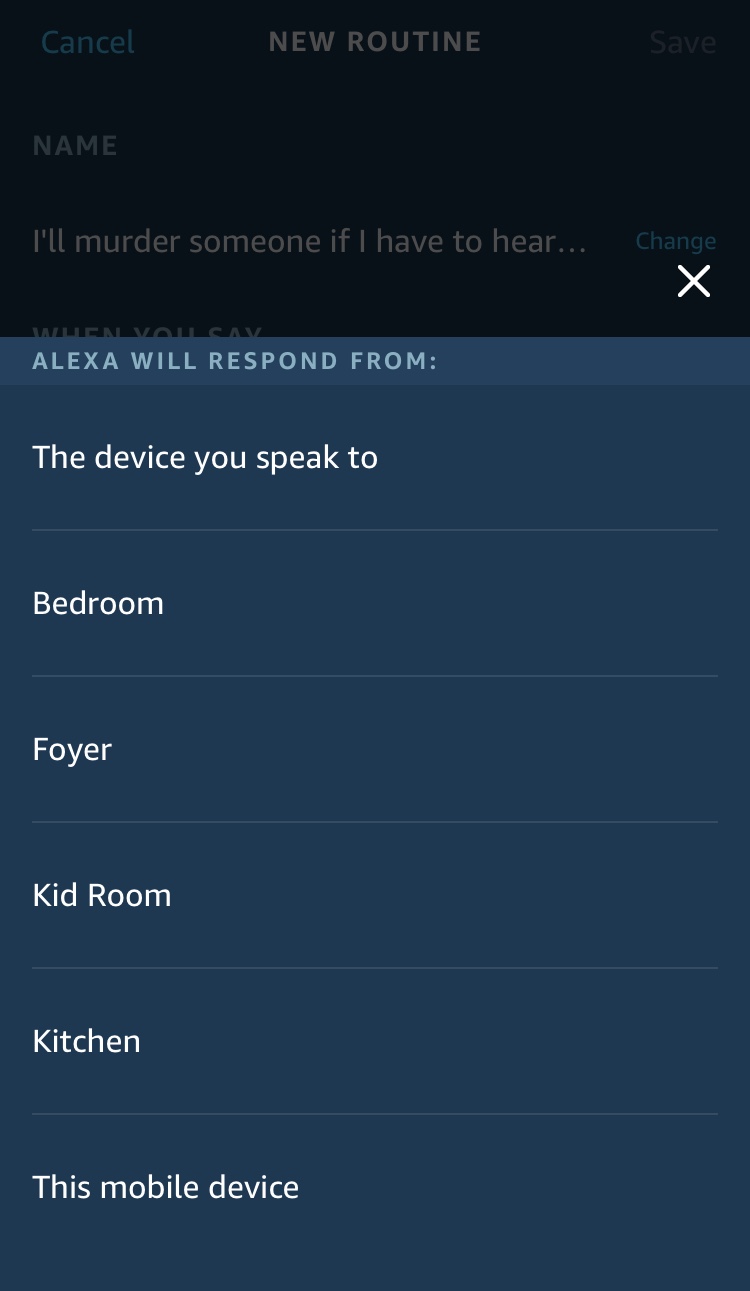 6. Tap “Choose Device” to select which Alexa will run the routine; pick “The device you speak to” if you want it to cover all the devices linked to your account. Tap “Save.”

That’s it! Your routine is complete and will be active more or less immediately. You can disable it at any time by opening up the “Routines” menu and tapping on the routine and toggling it off at the top of the screen. You can also tap the three dots in the upper right corner if you want to edit the routine or delete it altogether.

Note: The routines function by machine logic, so you might need to create a few to effectively block a song. You can get around a routine tied to “Play Roar by Katy Perry” by just saying “Play Roar,” for instance. Just increase the number of routines you create in proportion to the degree of your burning hatred for the song in question.