About once a year, my mum and I have taken a trip to Calistoga, California to drink wine, soak in mud and lie very still in hotel beds. On our drive back to my mum’s house in Sacramento, we’ll often pass through Yountville to gawk at the sheer Stepford-like bougie-ness of it all. “There’s The French Laundry,” we’ll say—not wistfully, exactly, but acutely aware of the fact that we will never eat in that particular dining room.

We’re fine with it. Driving by The French Laundry has become a sort of half inside joke/half tradition, which is why I was not surprised when my mum sent me TFL cookbook as a quarantine gift. It is just as inaccessible as you think it would be, almost quaintly so; I think I said “in this economy??” at least five times while flipping it through it. There is an entire section devoted to truffles, and most of the recipes are prohibitively expensive for the average home cook. But, as I was paging past the “Garden Canapes” section, I saw the recipe for Parmigianno-Regiano Crisps with Goat Cheese Mousse and thought “Finally: A thing a normal person might do.”

Parmesan crisps are not exactly a groundbreaking concept, but I was intrigued by the “clean egg carton” that was listed as a required piece of equipment. In the recipe, Thomas Keller instructs one to “gently press each one [crisp] into a hollow in the egg carton to form a tulip shape.” It’s a straightforward enough piece of direction, though I’m not exactly sure how one would ensure their egg carton was clean. (Those things are very porous.) Instead of cleaning my egg carton, I decided to line mine with a little plastic wrap. (I also tried it without the plastic as a control. The plastic made no difference.)

To test this tip, I sprinkled a little over a tablespoon of shredded cheese into an inverted canning jar ring set down inside a nonstick pan (to help keep the crisp stay nice and round). Once the crisp was lacy and, well, crisp, I removed it with chopsticks, let it cool for the Keller-suggested 30 seconds, then gently pressed it into one of the hollows of my (plastic lined) egg carton. It worked ok, but there was a small hole in the bottom, even though my pressing was very gentle.

I tried this three more times, the holes getting bigger with each attempt, before I decided that it was not a good hack. But you know what’s very good at forming little cups? Little cups! Or, you know, shot glasses. 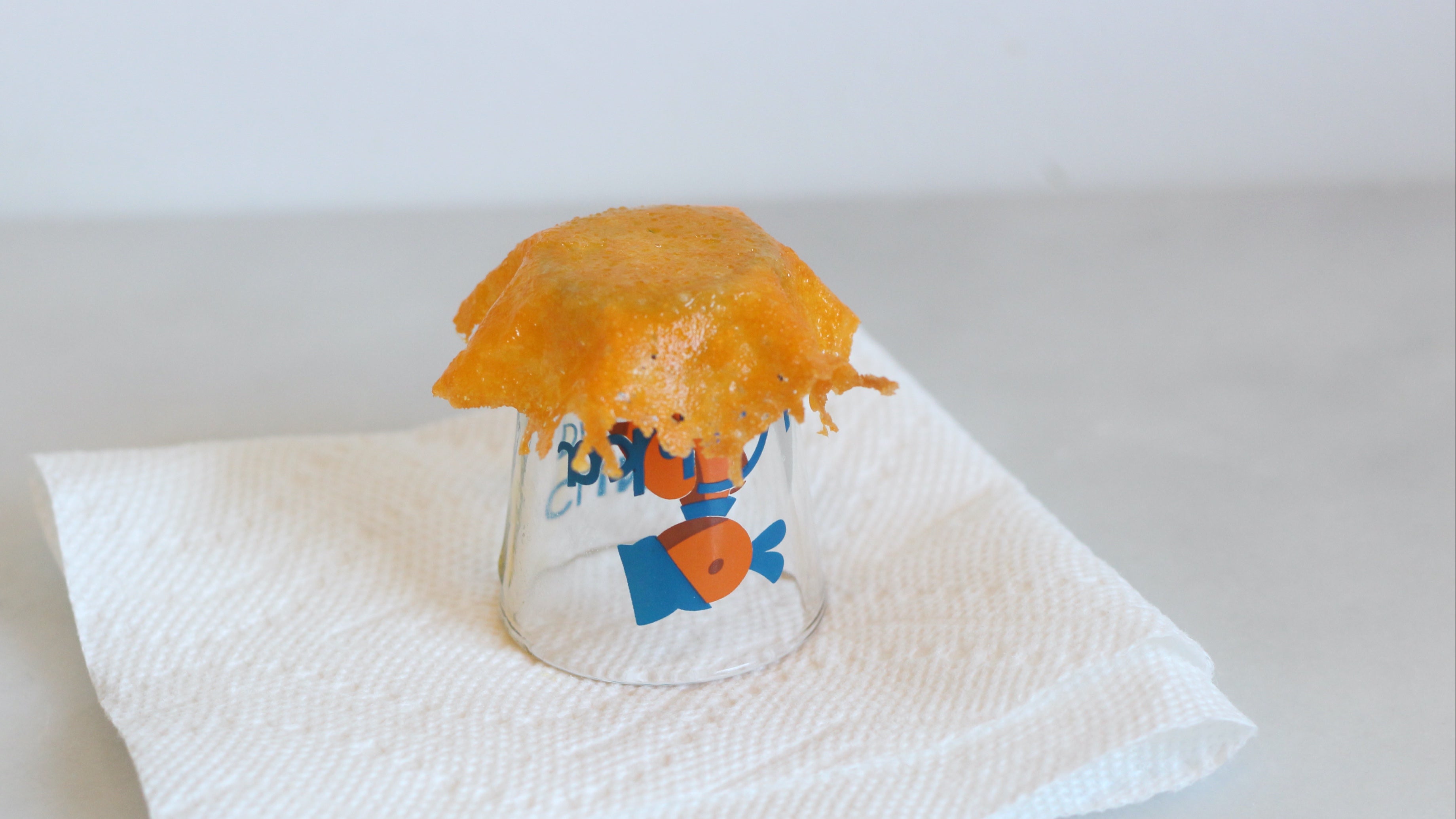 By draping a still-warm cheese crisp over a shot glass, you let gravity do most of the work for you. Gently pressing on the sides of the crisp, rather than the centre, makes it much less prone to tearing and excess grease can drip down the glass onto a paper towel. Plus, using a shot glass ensures the bottom of your crisp will be flat. (I’m not saying I could take over The French Laundry, but I don’t think Keller would be very good at my job either.) 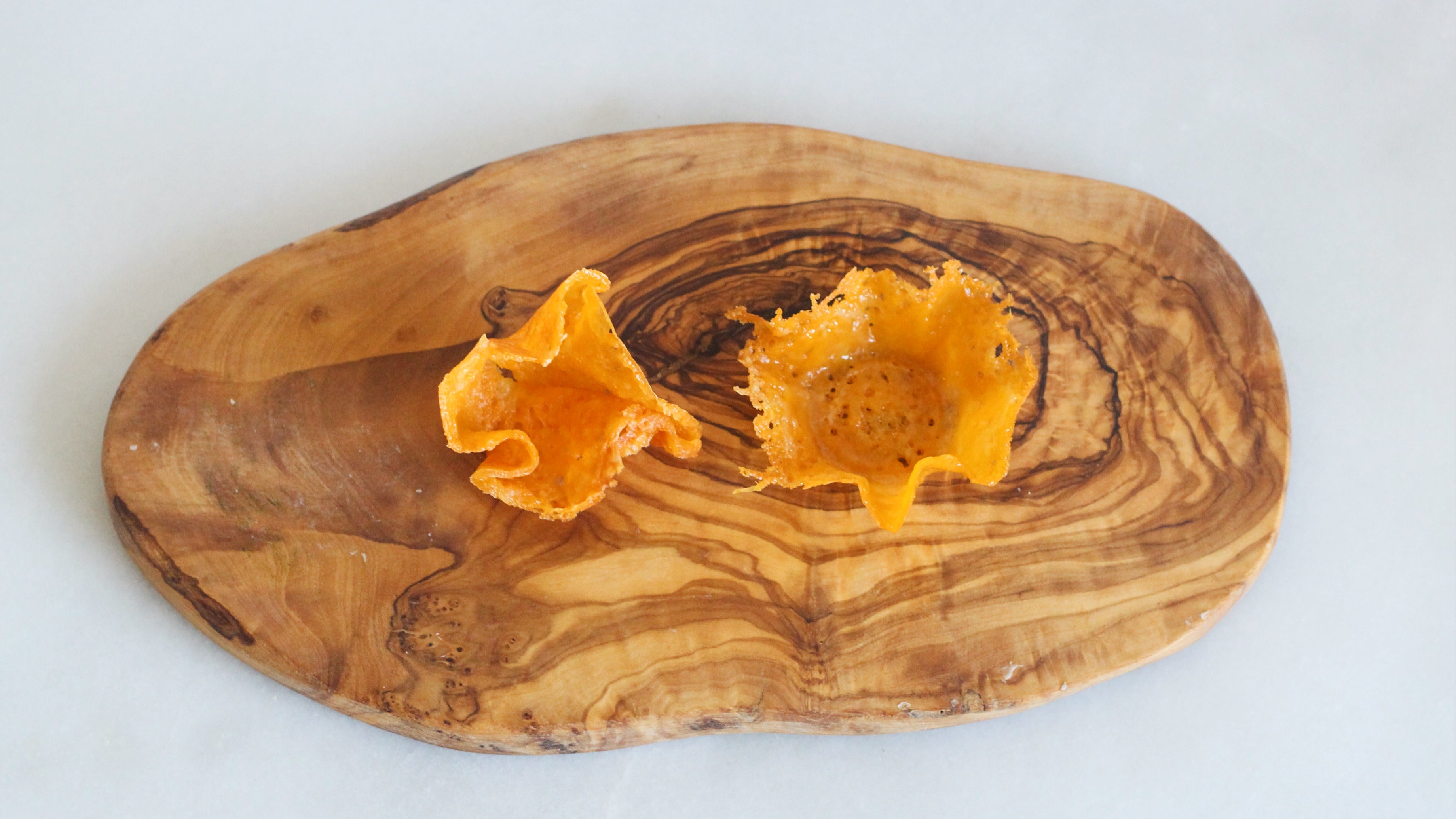 So that’s all you have to do to form perfect little cheese crisp cups. Fry about a tablespoon of cheese inside an inverted canning jar ring, then—once it gets all lacy—drape it over an inverted shot glass set on top of a paper towel. Press down the sides if needed to form the cup, then let cool completely. Fill with whatever you like. You could do a goat cheese mousse, or you could do what I did and make a little breakfast bite with a tiny sausage patty, a quarter of a boiled egg, a large crumble of goat cheese and a single parsley leaf. 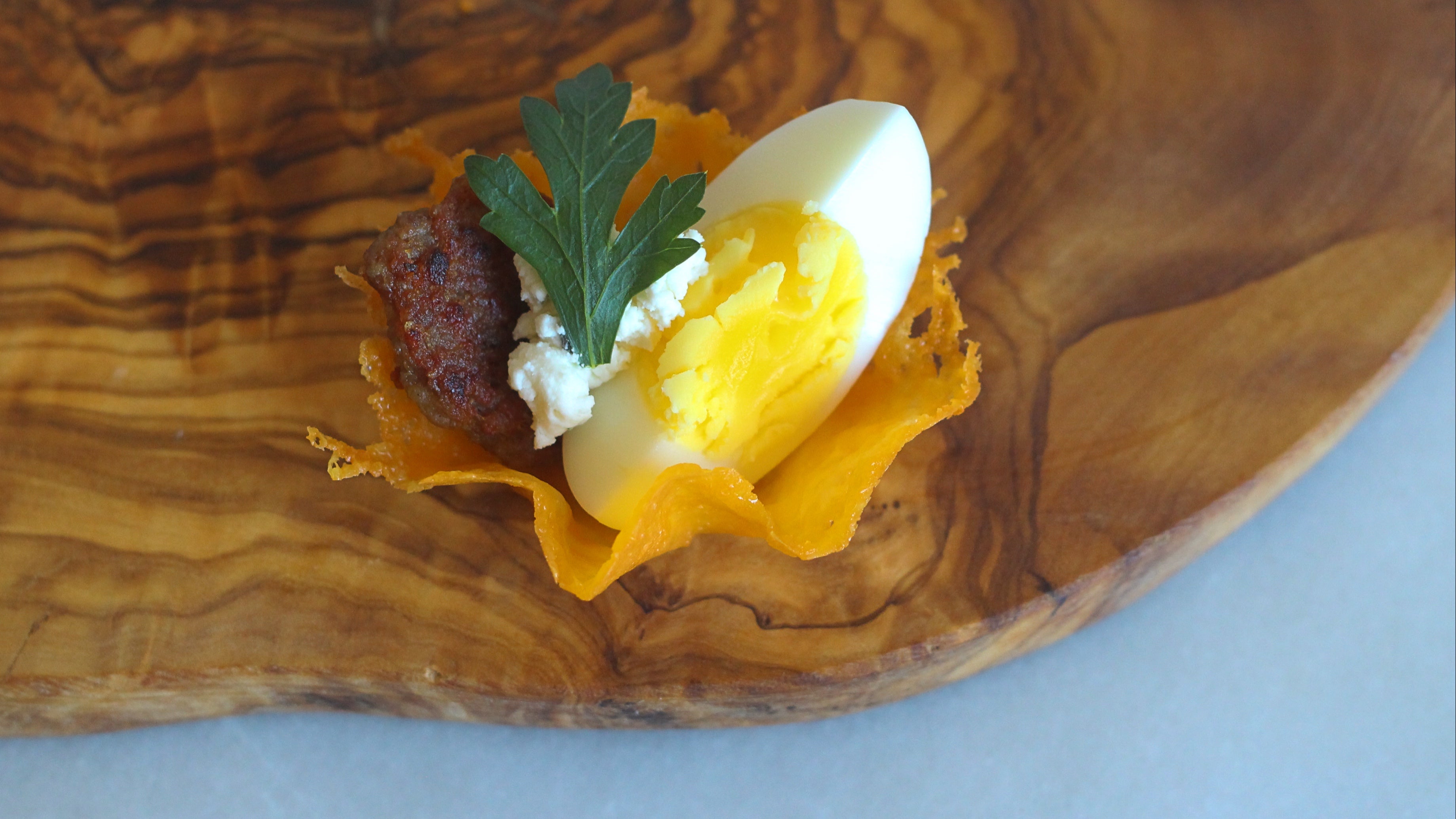 It’s an almost bougie bite, but it’s very delicious, and at least it doesn’t call for any truffle.