How To Introduce Your Kid To Star Wars 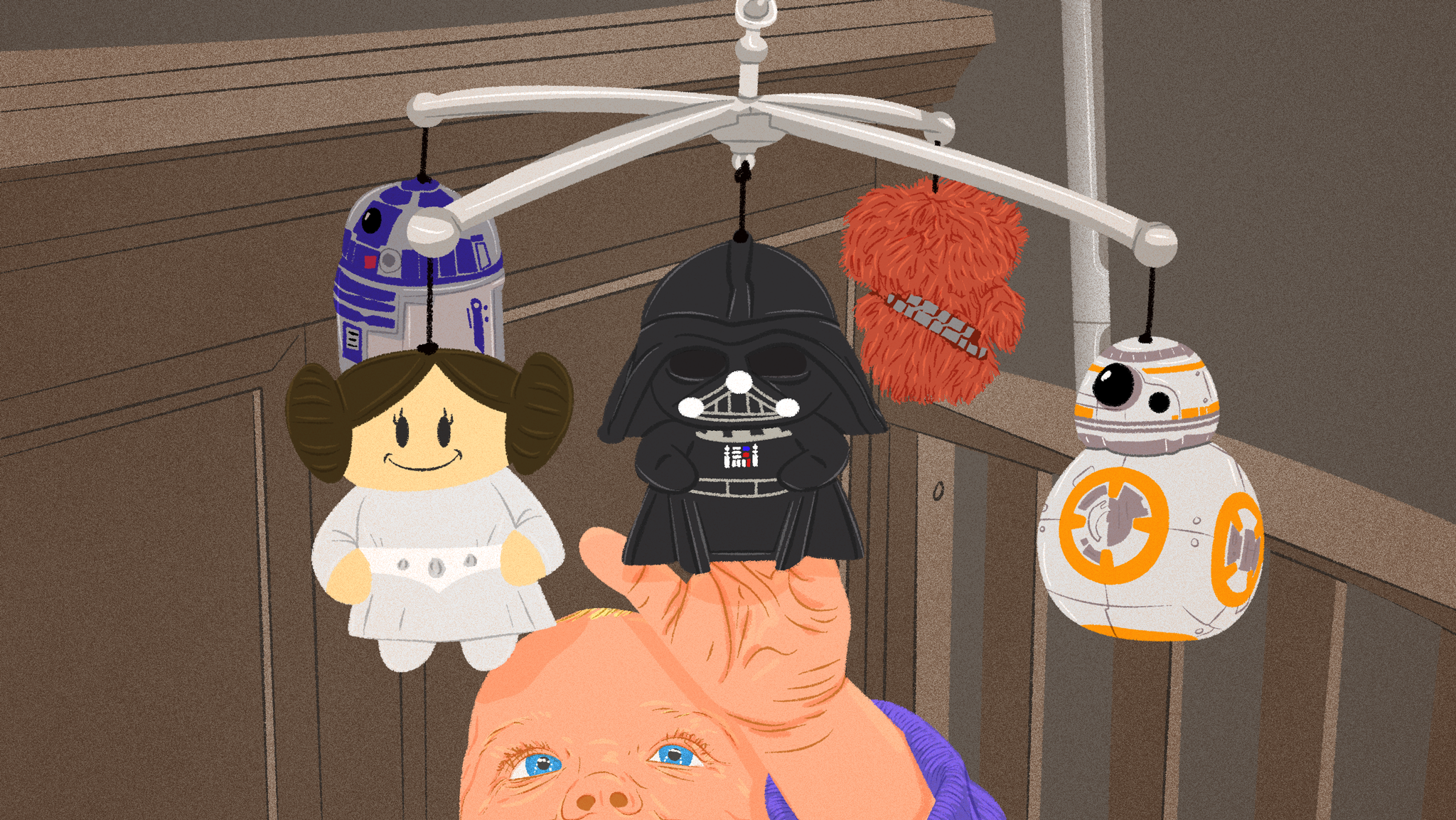 Unless you live in a pop culture bell jar, your child will be introduced to Star Wars. George Lucas's space opera has so thoroughly and efficiently saturated the entertainment-sphere, Star Wars indoctrination is as inevitable as exposure to cold germs at daycare. You can let fate, cultural osmosis, and Disney marketing executives control when and how your child learns about Luke and Leia, or you can guide them like a Jedi guides a padawan, making sure childhood Star Wars is something magical you can share.

Start with some toys

Toys and other merch will almost definitely be your child's first introduction to the Star Wars universe. Branded clothes, bed sheets, picture books, video games and more are everywhere, and if you're into the movies, you may as well load up your home with 'em. A newborn in a "Storm Pooper" onesie is adorable, and kids love the iconic, friendly faces of characters like Chewbacca and C3PO.

Just be aware of choking hazards and age labelling. For safety's sake, it's probably best to stick to officially licensed Star Wars toys. You don't want your newborn sucking on a lead-coated "Goba Fett" action figure from an unlicensed factory.

The video games are great too. My kid's introduction to Star Wars came from the LEGO: Star Wars games. Dex and I working together to get through these funny and well-designed games is a great memory of the summer between kindergarten and first grade.

Take or leave the cartoons

When it comes to narrative Star Wars, many parents start with the two canonical cartoon series, Star Wars: The Clone Wars and Star Wars Rebels. Both are high-quality entertainment that kids like, but I'm lukewarm on the cartoons overall. They have their moments, but they're just not special the way the movies are. (Not to disparage the creators of these shows: Maintaining the quality and impact of Empire Strikes Back over six seasons of a cartoon is probably impossible.)

In our house, we park our kid in front cartoons when we need a few minutes to pay the bills or take a shower, but Star Wars is something we do together, whether it's playing with action figures in the sandbox, our co-op LEGO Star Wars: The Video Game run, or watching the movies. Your mileage way vary.

While toys and games have their place, movies are the pure, uncut Star Wars. But how do you know when your padawan is old enough to mainline that sweet, sweet space opera? Like so much of parenting, it depends on the child.

All of the Star Wars movies are aimed at kiddies, so in terms of violence and understandability, they're PG-rated but the appropriateness of any movie really depends on your ideas about acceptable entertainment and the sensitivity and personality of your child. My son was way more psychologically damaged by — spoiler alert — the balloon popping in The Red Balloon than anything in any of the Star Wars movies. (Sorry, four-year-old Dexter!)

That said, eight is a good Star Wars base-age. That's old enough to follow the basics of the stories and not be too traumatized by semi-gruesome moments like the reveal of Vader's mangled face or the smoking skeletons of Luke's Aunt Baru and Uncle Owen. But you should probably pre-screen each film with your child's sensitivity in mind. 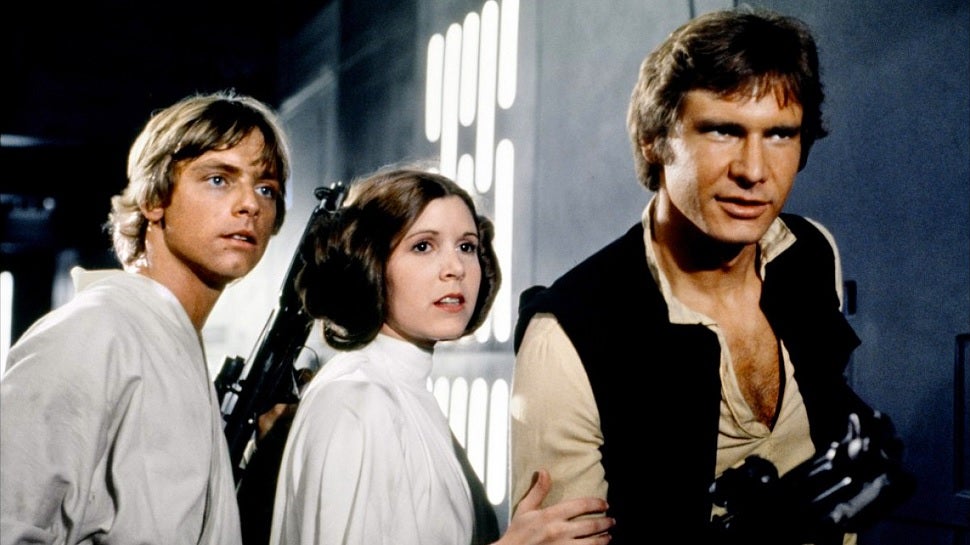 Since they were not released in chronological order, which Star Wars movie to watch when is a topic of deep debate among sci-fi freaks. George Lucas suggests a straight chronological order. The leading Internet theory — Rod Hilton's "Machete Order" — says that the best Star Wars watch order is IV, V, II, III, VI. Some say to watch them in order of production. In my opinion, though, none of these options are right for kids.

After careful consideration and a re-screening of all nine movies, I've concluded that the optimum viewing order for children is: IV, V, VI, VII, VIII, IX, I, II, III, Rogue One (followed by The Star Wars Holiday Special, but only if your kid is a budding hipster-ironist.)

This order put the most unabashedly Star Wars-y movies first and follows with the newer flicks that respect the tradition. The 1990s movies are relegated to the back of the pack. They're a bit of a grind to get through, and Rogue One is surprisingly violent, gritty, and bleak. Save these entries for children who just can't get enough Star Wars or who wonder why the Death Star had such an obvious design flaw.

For adults and older kids, a trip to a revival house is hands-down the best way to watch any Star Wars movie — these flicks were meant for the big screen. But for smaller ones, home viewing is the right choice. Smaller kids just don't have the attention span to sit through a two-hour movie and you don't want to be the parent of a screaming kid in a theatre.

Luckily, movie serials of the 1930s heavily influenced the Star Wars movies, so they're episodic and you can easily split 'em into 20-minute, post-dinner episodes. This gives you the chance to explain any confusing plot elements mid-movie or explain how Akira Kurosawa's The Hidden Fortress and Fritz Lang's Metropolis influenced George Lucas's visual choices.

Plus, watching at home means you can skip the boring parts! Fast-forwarding greatly improves some Star Wars movies. When I showed my kid The Phantom Menace, I chopped it down to a tight 90-minute chase flick by chapter-skipping the discussions of midichlorians and intergalactic trade regulations that make up most of the second act. He'll thank me when he's older.

Whatever you do, make sure you watch the Star Wars movies together. Listening to your kid's laughter when Obi Wan tricks the Storm Troopers or seeing their amazement and relief when Han flies back to help The Rebellion is magical, like a portal back to your own childhood when you felt the same rush.

Chill out! They're just movies

As a geeky parent, I know how it feels to want to share something that means a lot to you with your children, but nothing sucks the fun out of a room like parental expectation. So remember: There's no right way to enjoy Star Wars.

Don't fret if your kid is into Jar Jar Binks and thinks Han Solo sucks. Don't worry if they don't regard Empire Strikes Back as the best film of the original trilogy. Some kids are indifferent to Star Wars altogether (I've heard), and you need to be ok with that possibility. They're great, but they're only movies after all, and you don't want your kid telling a therapist: "It all started when my parents got mad at me for calling the villain in A New Hope 'Darf Vader.'"