How To Plan A Holiday With A Lower Carbon Footprint 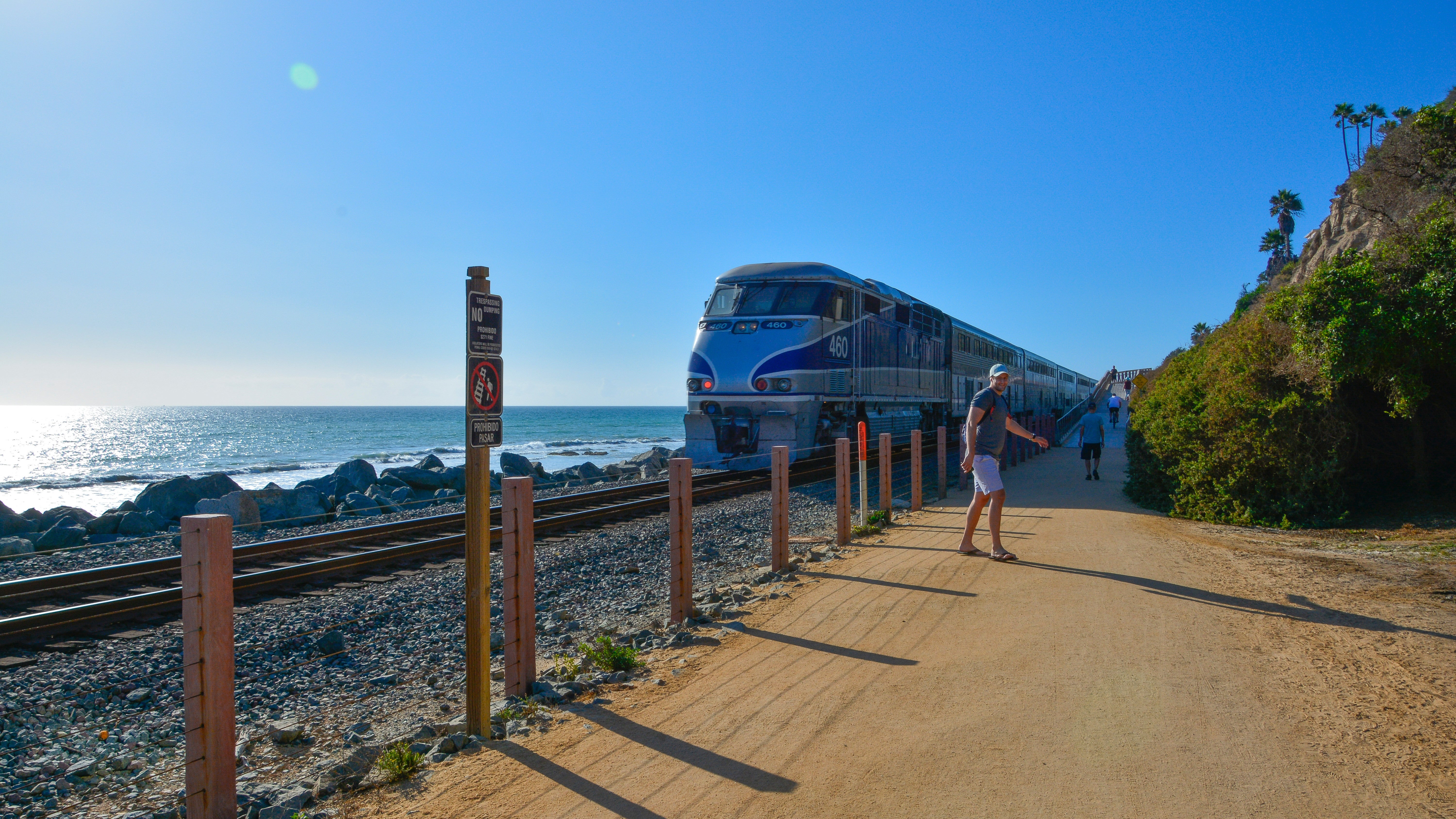 Going on holiday is dreamy, and good for your brain whatever your budget. But when a single round trip from New York to London releases a literal ton of CO2 into the atmosphere (enough to melt three square meters of Arctic ice), it’s hard to relax and enjoy that free aeroplane booze without ruminating on it. If you want to do 2020 holidays without flygskam, we’ve got tips on strategising for greener travel options in the year ahead.

The big one. Taking a holiday without flying will have an overwhelmingly positive effect on your carbon footprint (taking one less transatlantic flight a year is twice as impactful as spending that whole year as a vegan).

In a piece for Outside Magazine, Taylor Gee breaks down some simple rules for cutting carbon emissions when travelling: carpooling, flying direct when you can, travelling outside of rush hour, picking carriers with the best record on delays, and driving instead of flying on short flights, especially those shorter than one hour. Added up, these small tweaks to your itinerary can have a significant impact on your holiday’s emissions.

Ready for a more dramatic change? Ariella Granett was. Shocked to find out just how damaging plane travel can be on the environment after reading a 2018 Vox story in 2018 about the international Flight Free campaign, she took up the reins for the US chapter. (Flight Free is a campaign founded by a Swedish organisation, Vi håller oss på jorden—‘We stay on the ground’—that registers people’s pledges not to fly in 2020).

Despite her role in the campaign, she knows the decision isn’t black and white: “Flying is something that people can start to think about reducing without completely letting go of and without changing their lives. So it’s keeping life recognisable… I have to be delicate around these conversations and make sure people understand that I’m not judging. I was there myself not too long ago.”

Monisha Rajesh’s book Around the World in 80 Trains—which includes US and Canadian journeys—won a National Geographic best book award last year. While some have been using train trips to replace flights, she’s planned entire holidays around specific train routes.

In particular, she says, she loved the Canadian Sleeper: “We were just one up from Economy, it was a little cabin that had a bunk bed in it. During the day, they fold down the beds into these big lounger seats that you can sit in by the window. There’s plenty of space–you can spread out a Monopoly board on the floor and sit cross legged. It also has an ensuite toilet. I think about eight cabins share one shower, but it’s got hot water all the time.”

Rajesh also took Amtrak and though she says there are drawbacks (small cabins, infrequent trains, passes limited to 12 journeys) she loved the sociable atmosphere at dinner (“almost like speed dating”) and, of course, the panoramic car: “Bring binoculars. Going through deserts it’s amazing the wildlife that you spot—eagles, different types of birds and jackrabbits, and all sorts.”

Her next book will cover night trains and sleepers, and she already has her eye on another Canadian trip: “There’s an amazing journey from Winnipeg to Churchill nicknamed the Polar Express—you can see polar bears on route and the Northern Lights. It’s one of the bucket list Canadian journeys.”

Admittedly, small cabins aren’t the only drawback to train travel in the US and Canada. It takes longer: for example, flying from New York to Chicago takes about four hours; the train takes about 20. Furthermore, trains are scheduled much less frequently than planes (again, looking at New York-Chicago: three rail connections vs over 300 flights).

Granett hopes that people’s ‘green’ travel choices will add weight to the argument for better railways: “Especially in the United States, our train system has so far to go. We’ve been waiting for a bullet train between the Bay Area and Los Angeles. That is one of the really frequent, short flights people take, and that would revolutionise travel in California.”

But for the hardcore ethical traveller, Greyhound is best. “There may be some exceptions, but as a general rule of thumb, riding a bus is almost always the most environmentally friendly mode of longer-distance transportation,” Abigail Wise, digital managing director of Outside magazine, notes.

Yes, it’s a flawed science, but if you’re going to fly then making a donation to support carbon capture or clean energy is better than doing nothing. It’s also a bargain compared to the overall price of planning a holiday—offsets for an 8-hour flight can run you as little as $US10 ($15). (We’ve got a full guide to offsets, including options on where to buy them, here.)

If you’re not persuaded by offsets, then you could simply pick an environmental charity you already support – Greenpeace, SolarAid, the American Forest Foundation—or think of a recent climate event, like the Australian bushfires, and use the calculators as a guide and support climate activism or disaster relief instead.

Oh, and take a backpack rather than pounds of luggage. Krissy Roe of Responsible Travel says, “Flying less is obvious—but if you fly, then pack light and travel economy: the heavier the cargo, the more polluting. A good rule of thumb is to pack what you think you need, and halve it.”

Responsible Travel came out against offsetting ten years ago. Roe explains: “We can’t offset our way out of the climate crisis. Reduction is our only option. When we fly, the impacts are immediate: offsets aren’t. Take tree planting: saplings that even reach maturity can take decades to do so—time we don’t have. The climate crisis demands industry change, including proper taxing – and we need to see governments holding aviation to account.”

“We’re not anti-flying,” she adds, “but we have to fly much, much less. Jetting off on regular [weekend trips] isn’t sustainable. Make your holiday count. Couple it perhaps with shorter flight-free breaks close to home.”

Expand your horizons beyond the tourist traps

Roe recommends travellers avoid places already suffering from overtourism, and find out how to visit off peak. “Consider your motivation for visiting a particular place. Some areas are being overwhelmed by tourists and influencers arriving en masse and contributing little,” she says. “Spend your money locally. Make an effort to connect with the local community—don’t just view it through a lens.”

Destinations aside, Roe adds, they’ve also seen a sharp rise in vegan holidays, and also learning breaks—particularly those where travellers can learn things like painting, dancing and cooking. “Cooking break providers in the U.S. like The International Kitchen have bookings available in 2020, and at Road Scholar there are U.S. learning breaks on everything from tin smithing and pickleball to the lap dulcimer,” she says.

“Airbnb’s ‘experiences’ section is a good place to look for classes and workshops from independent local providers across the U.S.”

New research by ResponsibleTravel.com found that, after flights, food could be the next biggest carbon suck on your holiday. Experts did a deep-dive into the carbon emissions from four different holidays and found that for one of them, per-person emissions were from food choices were higher than for a return leg of a flight.

If at home you save electricity, compost, and eat locally and seasonally, you’ll be on the right track. That said, “Our carbon ‘foodprint’ on holiday can be vast—try to choose plant-based, locally-sourced food, and eat in small local venues to contribute to the local economy,” says Rose. “If you’re taking tours, make sure yours is a responsible operator, or seek advice before you commit. And of course, try to choose environmentally-friendly accommodation—an increasing number are using renewable energy and actively encouraging biodiversity.”

In the long run, greener travel means radically different (and longer!) holidays, often ones that are longer, and fewer and farther between. “Done well, tourism is a powerful force for good,” says Roe. “We need to go back to how we used to travel: take one, longer break a year—immerse yourself in a place.”

Magazines like Outside have done sensitive work into how Instagram-influenced itineraries affects sacred sites and Indigenous cultures. Kiona, who runs the ingeniously titled site How Not to Travel Like a Basic Bitch, advised Outside readers on finding truly sustainable tour operators: “Many people who claim to be ‘sustainable’ aren’t really, or are sustainable at the expenses of local/Indigenous Peoples.”

“The surest way is to hire local, hire Indigenous,” Kiona says. “Whenever the world realises that Indigenous life ways and protecting the environment are one and the same, that’s when we’ll have all our answers. Saving Indigenous lives means saving the planet and vice versa. Hiring Indigenous tour operators means also endorsing their local knowledge on how to interact with the environments they live in. Anything else, I would be wary of.”

For example, in Payahuunadü (the Owens Valley and Eastern Sierra region of California), a guest post on Kiona’s blog recommends asking reservation’s tourism or cultural centres for local recommendations, or simply Googling Indigenous tours for the place you’re visiting.

This year Kiona recommends the Southwest in the U.S., and Mexico: “From one of the best subway systems I’ve ever been on to the incredible luxury buses that take you from city to city, Mexico is built for slow travel.”

“Road-tripping through New Mexico, Arizona, Utah, and Colorado is really seeing America, especially the connection to all of the Indigenous Nations along the way such as Navajo Nation, the Pueblos, Havasupai, Hopi Nation, or Zuni Nation,” she adds. “The landscapes are jaw-dropping. It’s a deep dive into what makes up the United States, and was here before it was the United States.”