How Do You Extend Your Display Across Two Monitors?

In this week’s advice column, we’re tackling a question from a reader who has a problem with his dream setup: a multi-monitor arrangement that lets him double his productivity (or goofing off).

I feel his pain. I used to run two monitors for years — even at prior jobs that were stingy about giving out an extra display to anyone — until I finally upgraded to my beast of a 34-inch ultrawide display. Multi-monitor setups can be a little annoying if, or when, your operating system gets fussy, but any problems you encounter shouldn’t take long to fix.

I need some help with Windows 10. I use dual monitors (couple of years old). The monitors were working fine until recently I upgraded my Windows 10, now both the screens shows the same applications. Detect in control panel doesn’t work. One is a Dell and another is a ASUS monitor. Can you please help?

Here’s the good news, Sameer. I don’t think that you’re encountering a permanent problem. I highly doubt that upgrading to Windows 10 has cursed you with an inefficient multi-monitor setup. What likely happened is that the upgrade simply reset your settings, and Windows is treating your monitors however it wants at the moment.

To troubleshoot this, you have a few options. You didn’t mention if you’re running integrated graphics or an AMD/Nvidia graphics card in your setup, so I’ll start by addressing this. If you’re using a third-party graphics card, make sure you’ve installed the latest drivers (from AMD or Nvidia). As part of that, you might be presented with the option to upgrade whatever drivers you’re currently using (an “express install”) or run a “clean install,” which wipes out any existing settings during the installation process. Go with the latter, just in case.

Following that, investigate either company’s control panel — found by right-clicking on the Windows desktop and selecting the Nvidia Control Panel or AMD Radeon Settings. Within here, you should find some kind of option to manage a multi-monitor setup — or at least, a way to check that your two displays aren’t being configured in a way you don’t want (cloning or spanning). Since I’m using a Nvidia graphics card, here’s what this looks like on my system: 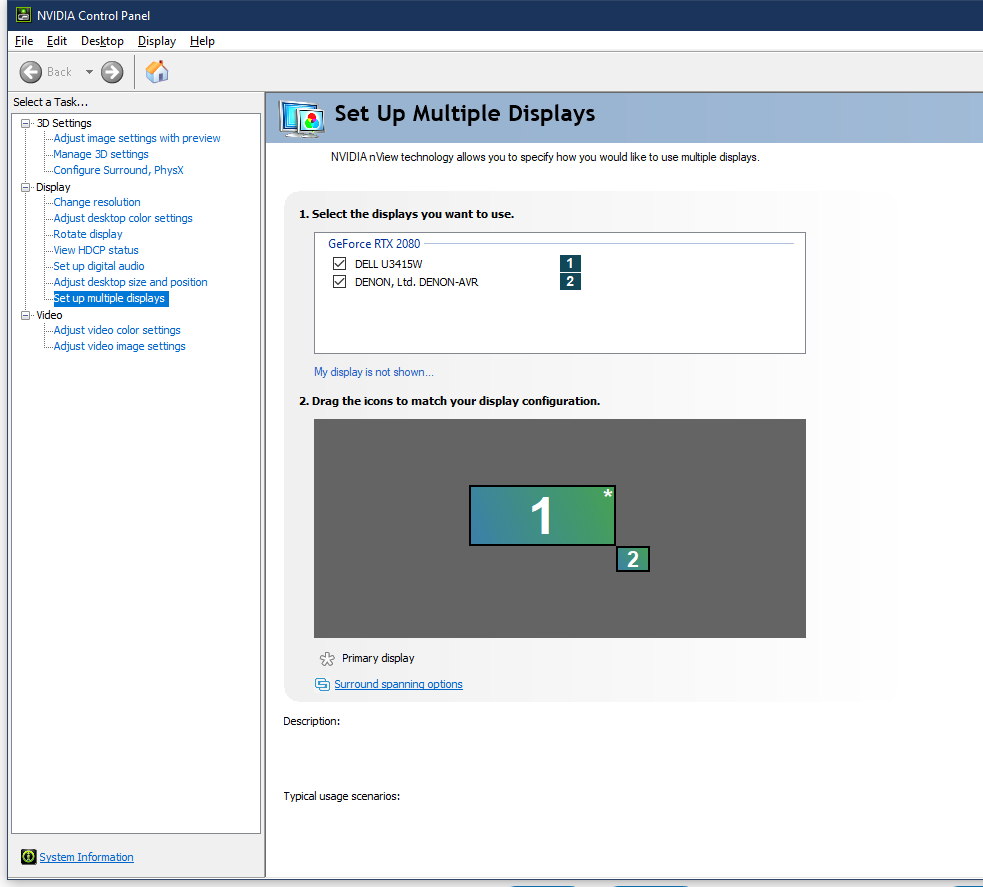 If you don’t see this option in your control panel, you want an easier solution, or you use integrated graphics, you can also accomplish this same step through Windows itself. Pull up Windows 10’s display settings by clicking the Start button and typing in “Display.” Click on the first option that appears in your Start Menu. You’ll see a screen that looks like this: 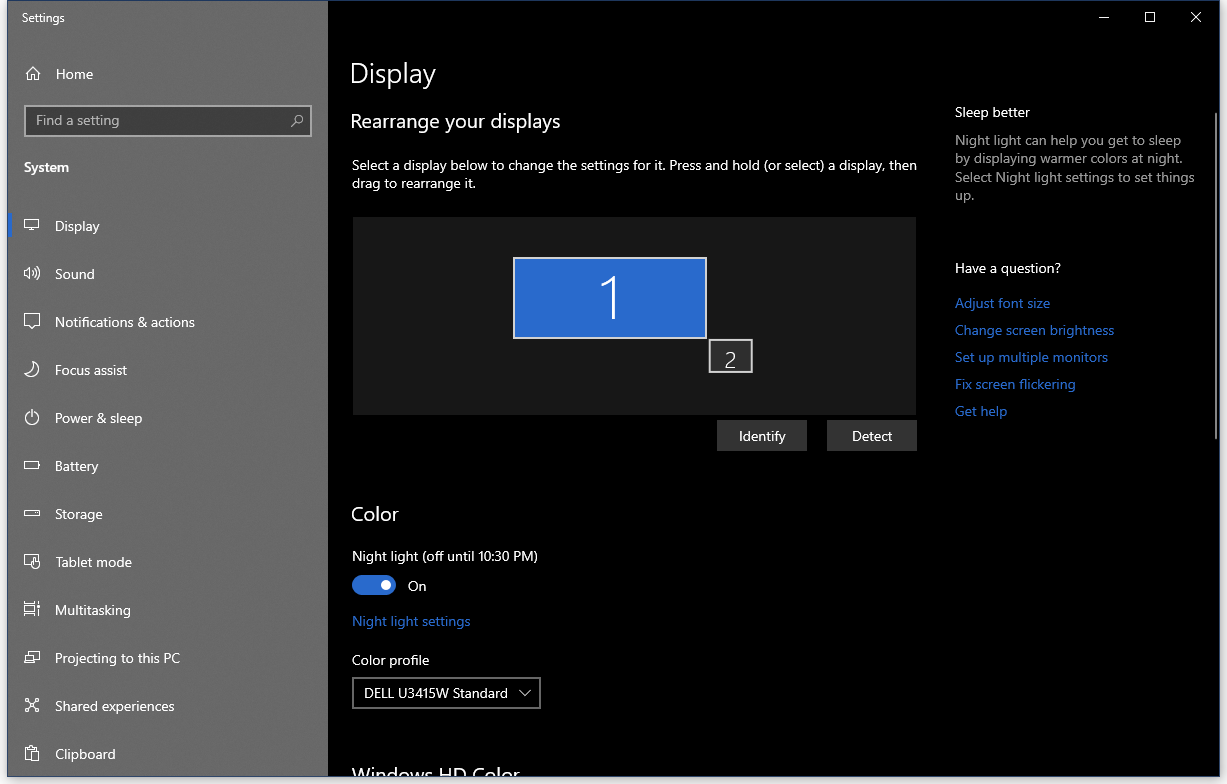 Scroll down a bit, and you should see a drop-down that allows you to pick whether you’d like to duplicate or extend your displays (or, for whatever reason, only show a picture on your first or second display). I’m willing to bet that, in your case, this has been changed to “duplicate” — and you’ll want to select “extend,” instead: 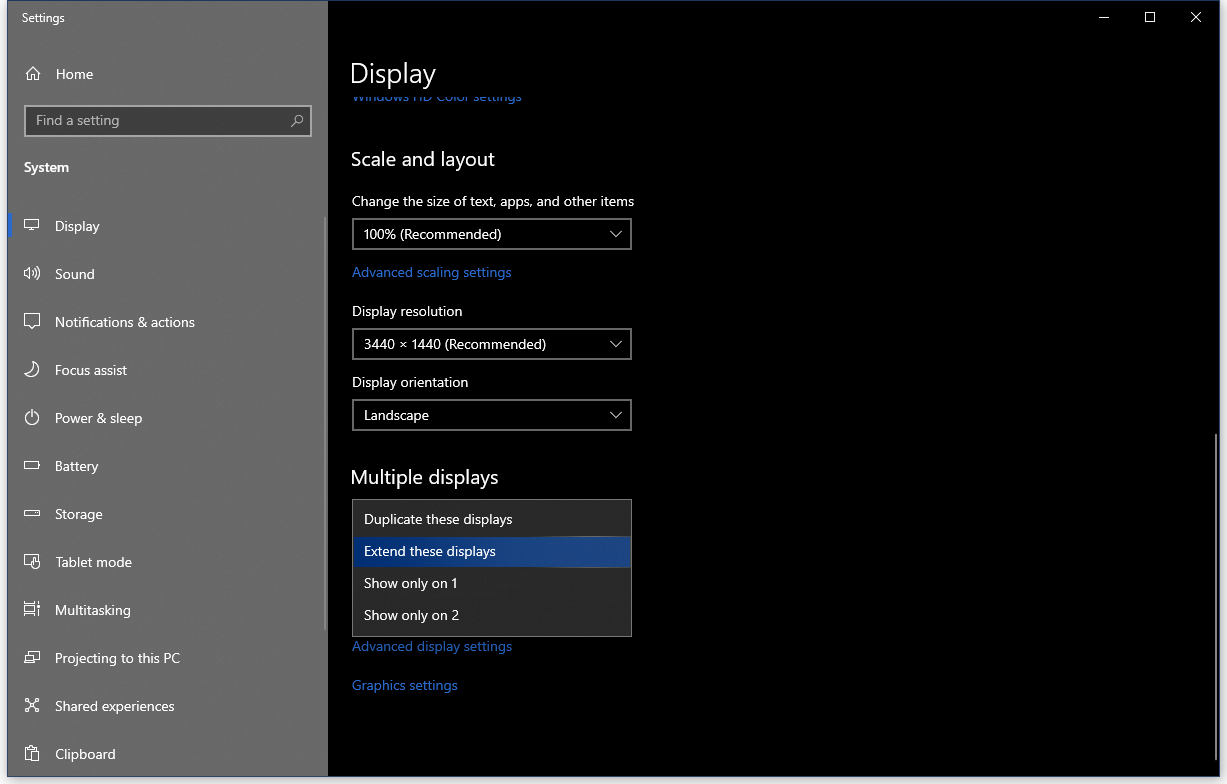 If setting this option still doesn’t work, you might have to get a little creative with your troubleshooting. When I’ve had issues with multi-monitor setups, one trick that usually works is to power down your system, unplug the your secondary monitor, and power up your system with only one monitor attached. From there, you might also want to reinstall your graphics drivers (if applicable) using a “clean” installation, so there aren’t any weird settings giving you issues.

After you’ve done that, power down your system one more time, plug in your second monitor, and power your system back on again. You might have to go fuss with the settings again via your AMD or Nvidia controls (or Windows 10’s), but this should fix any issues you’ve been having. You can also consult Windows 10’s device manager to make sure there isn’t anything funky happening there (like two instances of one of your monitors, for example — if so, try uninstalling one?)

Also, I’d double-check that you’ve plugged the monitors in correctly. I don’t think this is an issue, given everything worked fine before you installed Windows 10, but it’s worth mentioning.

I suspect you wouldn’t even see a picture on both monitors if you did that, but if you did, this might be a reason why you can’t extend your picture across both displays.