There’s always something new to watch on Twitch, whether it’s someone build-gunning their way through a Fortnite match, completing a 24-hour marathon of some classic game you haven’t played since childhood, or showing you all the secrets for that brand-new expansion from your favourite digital card game.

But while I risk angering the Twitch gods for saying it, you can do so much more on the massive streaming service than stream games. Sure, that’s fun and all, but you can also use Twitch streams to improve your life in unique and exciting ways. (Or, at the very least, you can learn the basics of a new hobby you’ve been dying to try.)

Consider the “Climate Fortnite Squad,” which hosts science-themed Q&A sessions during Fortnite battle royales (and other streamed games) to entertain and educate viewers. Sure, you’re still watching someone play games from afar, but you’re getting your daily dose of worldly knowledge, too.

It’s like having Bill Nye in your raiding guild.

Finding great non-gaming Twitch streams can be a bit of a hassle, but it’s not an impossible task. Here’s how I did it, including a few great examples you can check out — from learning how to program, to educating yourself about astronomy, to getting a handle on some basic cooking techniques.

Twitch can even teach you how to Twitch 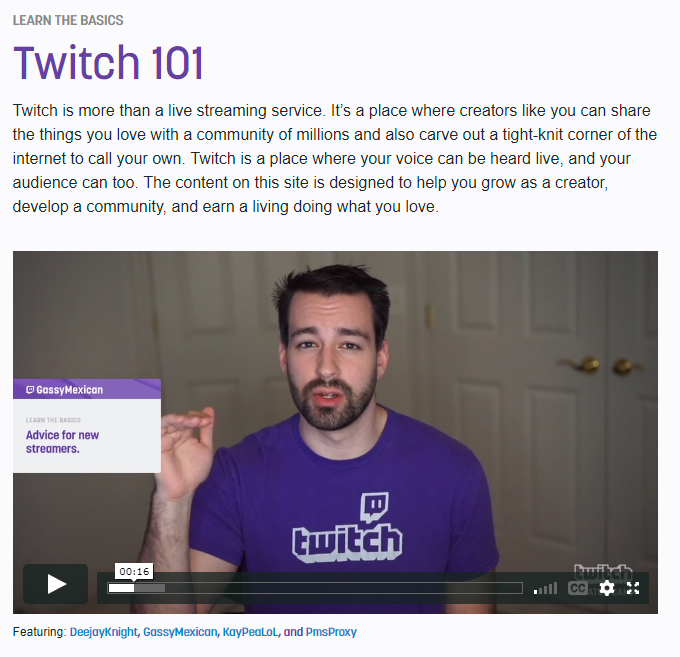 Before I get to the streams, I wanted to give a quick shout-out to Twitch’s Creator Camp, a helpful little portal you should check out if you’re brand-new to Twitch and are contemplating doing some streaming of your own. Whether you’re planning to blast out your gaming accomplishments for all to see, or want to give some of Twitch’s alternative categories a try (which we’ll focus on in a bit).

While the Creator Camp isn’t a Twitch stream of how to stream on Twitch—how meta—it does contain a number of useful videos from other Twitch streamers that are full of tips and advice for starting out. Studying the Creator Camp won’t make you a million followers in the first day, alas, but it never hurts to get a solid grasp on the basics.

When you visit Twitch’s front page, you’re going to see a ton of game streams. Twitch is, by and large, a place where people to go watch others stream their gaming endeavours — there’s little argument against that. However, you will still see a smattering of non-gaming channels make it to Twitch’s “Live channels” list or the home page carousel at the very top of the page (or even the top, autoplaying video spot, as was the case when I checked the site right now):

The “Just Chatting” category is exactly what its name implies: hanging out, not gaming.

To find channels that aren’t just people blowing each other up or building complicated cities out of blocks, you’re going to need to do a little searching. And you have two ways to do this: categories and tags.

Browsing categories on Twitch is easy. From the homepage, you can either click on the “categories” link under the “Popular categories” section or click on the big “Browse” link in the upper-left corner. See the huge listing of games, with a handful of non-gaming items here and there? Those are categories.

What I find even more useful, however, is Twitch’s tagging system. Like most systems for managing large stashes of information, categories are the big general buckets you can sort through for interesting streams, but tags are a much more useful way to find the exact streams you’re interested in — especially those of the educational variety.

You can see all the streams associated with a tag by clicking on a tag whenever it appears under a stream thumbnail, like this:

This takes you to the aforementioned Browse page with the tag already used to filter your results. Click the big “x” on a tag to remove it, and click “Add Filter” to look for any other tag you want. As for what you can search for…

How to tackle Twitch’s tons of tags

When using filters (tags, really) to find new Twitch streams, you might miss a lot of what’s out there if you’re just mindlessly typing in subjects you enjoy. In other words, Twitch has a lot of tags that streamers can use to organise their content on the service and attract new viewers.

Here’s the other annoying part. The drop-down menu that you get when you click in the “Search Tags” box isn’t even complete. Though the list looks comprehensive, it’s but a small fraction of all the tags Twitch offers. 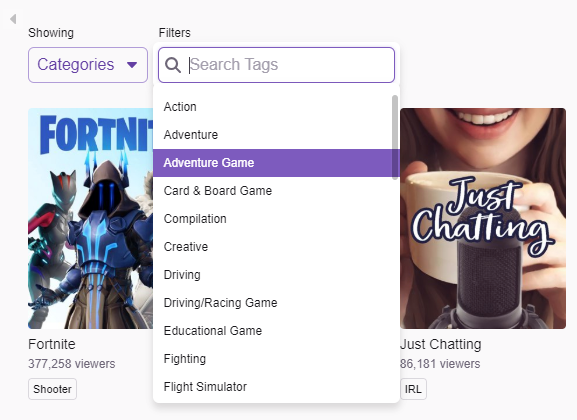 Twitch has published these tags elsewhere, thankfully. And you have a mere 248 to pick from. Feel free to peruse that list—it’s a great lunchtime activity. I have, and I’ve found a few great streams worth checking out for when you’d rather learn something new than watch someone get yet another pentakill.

A few great Twitch streams for learning something new

Skylias: Her stream is basically a grab-bag Q&A, but she covers everything from “history stuff,” to “space stuff” (with guests!), to “Miscellaneous with BRAAAAD.” Who is Brad? We’re curious about that now, too.

DevChatter: Learn to code—or, at least, watch a coder work his wizardry while you ponder how much money you’ll make as a software engineer someday. (I’m also a fan of TimBeaudet’s stream, if you want a similar approach to coding.)

PennyArcade: Where to begin? Watch the masters at work as they draw out the absurdly popular webcomic, watch said masters brew their own beer and get toe’ up, or watch the Friday show on the Twitch stream—Coding PA—that shows you the basics of how software and websites are built.

CookingForNoobs: ‘nuff said. And once you get some experience in the kitchen, feel free to check out Twitch’s official (re: never-ending) stream of food shows. I would have called it Iron Chef Twitch, but, well…

The_Widdler: Learn to make all of that wub wub wub wub wub club music for your future DJ career. Or, well, because you like creating new things in your spare time.

PiranhaGames: The BattleTech universe is known for its giant, detailed, weapon-strapped war machines. So, why not watch someone while they work to create these giant contraptions for the MechWarrior Online video game?

ZacFierceGuy: And if you’d rather see more of the nuts and bolts of video game creation, check out the self-titled “Bob Ross of Gamedev,” ZacFierceGuy.

SlowFuseGaming: I’m terrible at painting miniatures. Absolutely terrible. Thankfully, there are people much better than me who I can watch and learn from. I hope.

dwangoAC: You might not learn a lot from dwangoAC’s Twitch streams per se, but you can see how he iterates on his ever-famous TASBot, a special program-turned-”real” robotic creation that accomplishes things in video games that no mortal would ever be able to do.

DeamonMachine: If you need a little refresher on how to fix your car, or have no idea how to do something simple like “change the oil,” you’ll want to check out this helpful mechanic’s stream.

TominationTime: Get ripped. Or, at least, learn the proper techniques and exercises you could (or should) be doing to get ripped—or reasonably fit, at minimum.