No, You Still Shouldn’t Put Two Spaces After A Period

“Hurray!” tweets Yale sociologist Nicholas A. Christakis. “Science vindicates my longstanding practice, learned at age 12, of using TWO SPACES after periods in text. NOT ONE SPACE.”

Hurray! Science vindicates my longstanding practice, learned at age 12, of using TWO SPACES after periods in text. NOT ONE SPACE. Text is easier to read that way. Of course, on twitter, I use one space, given 280 characters. https://t.co/4xI6sVbF88 Will arm-wrestle @Neuro_Skeptic pic.twitter.com/XpEr4KFR4x

He then links to a scientific study, “Are two spaces better than one? The effect of spacing following periods and commas during reading,” which does not at all “vindicate” this practice. Here is how to see through Dr. Christakis’s lies.

First, some background. The war between the one-spacers and the two-spacers is, like any war of no consequence, hard fought. It’s the kind of topic Slate writers spend 1300 words on. Every slightly nerdy blog will eventually discuss it. The Mel Magazine headline is “For the Love of God, Stop Putting Two Spaces After a Period.” The Cult of Pedagogy headline is “Nothing Says Over 40 Like Two Spaces after a Period!” A career counselor has even suggested that two periods in a résumé could trigger age discrimination.

The two-spacers maintain that the extra space after each sentence makes paragraphs easier to read. The one-spacers counter that this only makes sense on typewriters, which give equal space to every character, unlike printing presses and computer fonts. During the typewriter era, text appeared weirdly spaced out, and the extra space after a period counteracted the weirdness. (This is why two-spacers tend to be older; they learned to write on a typewriter, not a computer. Baby boomers, as always, think their opinion is the default.)

Now two-spacers are sharing a new study, in which college students read text passages with one space after each period, or with two spaces. The study seems to indicate that using two spaces increases reading speed. But this claim breaks down if you examine the study:

This is already a dealbreaker. Courier New is a monospace font (technically a typeface) that imitates a typewriter. Every character is the same width: The letter i gets as much space as the letter m. In a monospace font, iiiiii and mmmmmm are the same length. (As you can see, in a typical, proportionally spaced font, they are not.)

You see monospace fonts in screenplays or the DOS prompt or computer code, all specific forms of data that aren’t structured like paragraphs of prose. You rarely see them on blogs, or news sites, or email or texts or chat apps. That is, most of us rarely read anything in monospace.

This alone makes the test useless. One-spacers already agree that typewriters and monospace fonts use two spaces after the period (except some screenwriters, who use one space). But reading a proportional font and a monospace font are two completely different scenarios. The study even acknowledges this: “It is possible that the effects of punctuation spacing seen in the current experiment may differ when presented in other font conditions.” Of course it’s possible — that’s what the whole debate is about! Why would you use Courier New!

Over email, study co-author Dr. Rebecca L. Johnson tells us why: She says it’s standard for eye-tracking tests, because other tests on text spacing have found no significant difference between reading monospace and reading proportional fonts. She also dispelled a common myth among one-spacers:

Unless you are using a true typesetting system (like TeX), modern word processing systems (e.g., Word, OpenOffice, etc.) allocate the same amount of space (in pixels) between words as they do between sentences, even when using proportional fonts.﻿

Of course, the most educated one-spacers know that this isn’t the point; the point of double-spacing is to make up for how monospace type looks weird and janky. It’s about aesthetics. Reading speed is just an excuse used by two-spacers like the American Psychological Association (more on that later).

There were only 60 participants

And they’re all students at Skidmore College, an undergraduate school built into the Shire of Middle-earth: 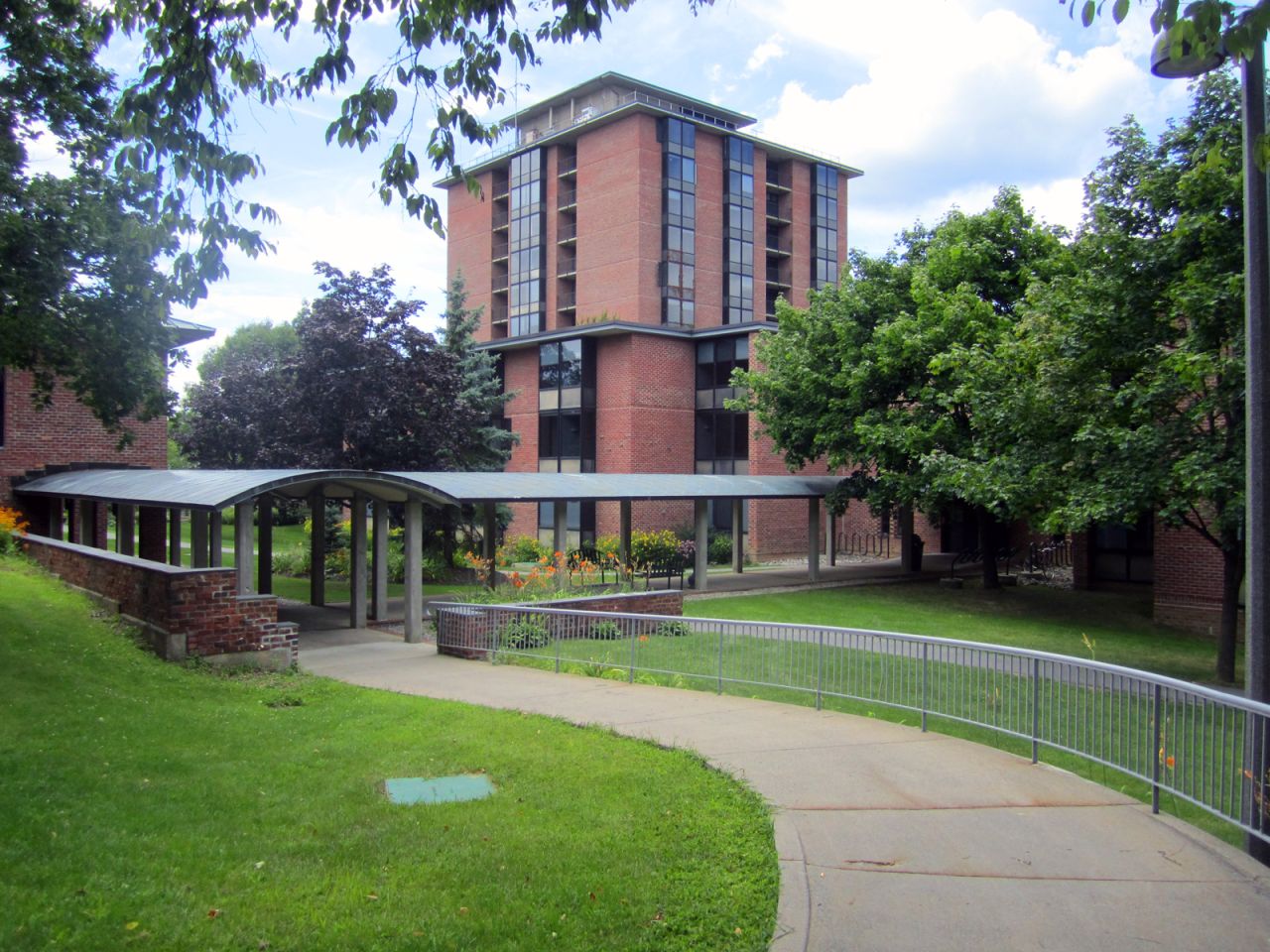 It’s not surprising that the only known study of period spacing is a small-scale test with just 60 college students. Period spacing is no one’s life work, and the actual consequences round down to nil (which is why everyone’s opinion is so important). But this is still a small sample size, and one that doesn’t represent the general reading populace. The study’s conductors don’t pretend they have built a perfect microcosm of the Anglophone world here — so don’t parade their study around to excuse your indulgent extra spaces, degenerate two-spacers.

This was not a typical reading experience

The students had to sit in a special getup with forehead and chin rests to limit head movement, so their eye movement could be measured. The lines of writing were quadruple-spaced. The only thing people read this way is an eye chart.

We get it, this is a study of eye movements, not just some survey where students pretend they can read fast. And apparently this is standard procedure for contemporary tests of reading speed and comprehension, where the focus is on careful eye tracking.

But — and this is our extremely unscientific conjecture — the effect of the double or single spaces might be somewhat obscured by the effect of darting one’s eyes around, hunting for the next line, while not being allowed to move your head! Think about that before you cite this study, two-spacing, butter-side-down-eating Zooks!

The results were minuscule

Anyway, in the study, the 39 students who normally type one space after a period read the one-space text about 1% faster. So for the 60 students as a whole, period spacing didn’t even change the average reading speed beyond a little statistical noise. (Reading comprehension stayed the same for both one-spacers and two-spacers.)

Maybe there’s a real difference that a bigger study would uncover, but all this study does is hint that any difference is not so overwhelming that it affects everyone, in every reading situation. That’s not nothing! It’s just a limited finding from a limited study that no one should be tweeting out like it’s the goddamn Milgram experiment.

So we’re back to debating aesthetics and tradition. Except for anyone who has to write to the American Psychological Association’s style manual — which changed its recommendation from one space to two in 2010, inspiring this study. Dr. Johnson explains to Lifehacker: “The only explanation that the APA manual gave was that it ‘increased the readability of the text,’ but there was no citation backing that claim.” She could find no study supporting the scientific organisation’s decision, so she ran her own.

Surprisingly, the Skidmore paper was typed up with one space after each period, but in her email, Dr. Johnson used two spaces (which was very noticeable and weird looking). Maybe she and her co-authors are playing both sides; their paper ends by putting everything in perspective:

While period spacing does influence our processing of text, we should probably be arguing passionately about things that are more important.