With a 17.3-inch screen, a Core i7 Kaby Lake processor and a beautiful, comfortable design in black aluminum crammed into a shell only 2.2cm thick, this is an absolute beast of a laptop that also manages to look and feel premium and classy.

The Razer Blade Pro is a big machine, but the benefit of that is that it doesn’t feel cramped. The keys are well-spaced and have a really nice deep-feeling travel you won’t get on a standard productivity-focused laptop. The large touchpad is offset on the right instead of being below the keys, which makes sense for gaming but I actually like it for general browsing and word processing too. A nearby scrollwheel is a genius idea. I used it to control the volume, but it can be programmed to perform whatever function you like. 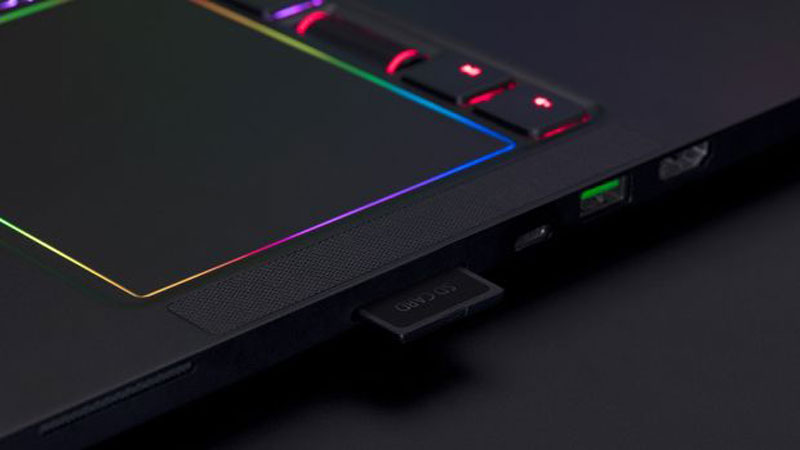 The scrollwheel-equipped touchpad is equally suited for work and play. (Image: Supplied.)

Like the Blade and Blade Stealth, the Pro also features Razer’s Chroma lighting system, with each key (as well as the scrollwheel and the lining of the touchpad) individually RGB lit. This means you can choose any colour for your backlight, or you can have the whole board animate in rainbows or coloured waves. For a more practical touch you can colour code your keys however you like, which can be handy for Photoshop shortcuts or strategy games. Certain apps and games can also take control of the lighting for a variety of effects. 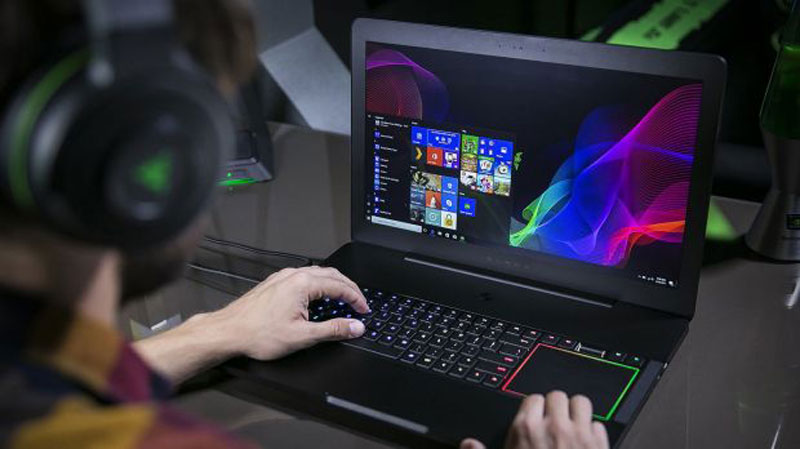 The unit I tested comes with a 1080p, 120Hz display, powered by a beefy GeForce GTX 1060 GPU with 6GB of VRAM. It packs 16GB of system RAM and 256GB of storage, and will set you back $3400. Combined with the i7, this makes for a very capable system that should outclass all but the most up-to-date mid-to-high-range gaming towers.

The machine easily runs graphically intensive games like The Witcher III and Rise of the Tomb Raider at maximum settings and 30 frames per second. In most games I tested, 60 frames per second and above was achievable, but not always at max settings. VR fans that need a portable rig could do much worse than the 1080p Blade Pro, with the laptop scoring a 6.8 (High) in the SteamVR performance test.

Still, if this isn’t enough juice for you Razer also offers a version with a 4K Nvidia G-Sync screen, a GTX 1080 with 8GB of VRAM, 32GB of system RAM and up to 2TB of storage. This model also offers a slightly more powerful processor with the option to overclock. Depending on how much storage you need, the 4K version will set you back between $5900 and $7300.

Either way you’re getting a decent array of I/O and compatibility features here, even if the Pro doesn’t have the sheer number of ports seen on some other gaming laptops. There are three full USB 3.0 ports, a full HDMI 2.0, a card reader, a dedicated charging port, a full ethernet port and a single USB-C with Thunderbolt 3. The super-bright display can handle in excess of 100 per cent of the sRGB gamut, while the 4K touchscreen covers 100 per cent of the Adobe RGB standard as well. 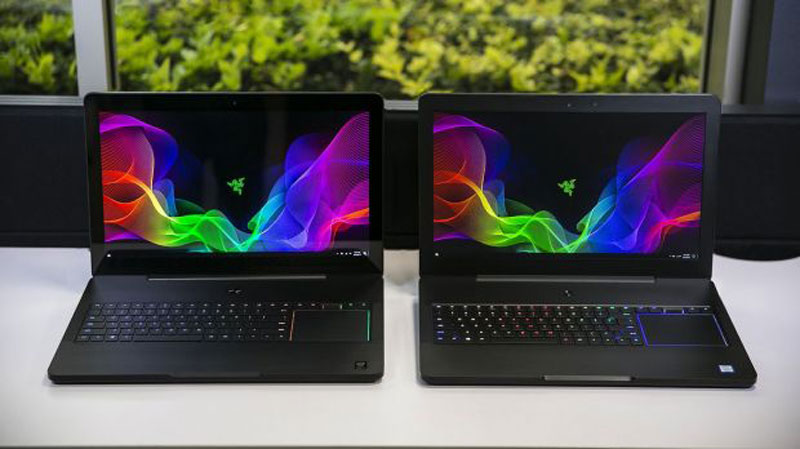 It’s hard to tell at a glance, but one of these machines packs a but more of punch than the other. (Photo: Supplied)

So which version is a better value? Of course the 4K version’s various upgrades would make for better performance and four times the pixel count, but at the cost of battery life (and a few thousand dollars). The 1080p unit I tested was lucky to make it five hours without being plugged in, so I have to imagine the 4K unit (which I haven’t tested) would struggle to make it to two.

Not that you’re going to be gaming on the train with this thing. At 3.5kg it’s light for a gaming laptop, but hardly ultra-portable. The 1080p version I tested weighs in at a smidge over 3kg, which is very light for an a 17-inch gaming laptop. You could practically carry it around in your backpack without suffering a life-threatening injury. The test unit tended to get quite spicy after only a few minutes of The Witcher 3, with the keys and underside of the system feeling pretty warm to the touch. Probably another good argument against using it on your lap.

With its comparatively slim and sleek design, I actually prefer the Blade Pro over competing game-focused laptops like the Alienware 17 or Acer’s Predator 17X. But if you don’t need the best of the best and are leaning towards the 1080p version over the 4K, it might be worth pointing out that you can get the 14″ Razer Blade with almost the exact same specs for $600 less. You won’t get a full ethernet port or the incredible performance of the 4K Blade Pro (or even a more powerful 1080p machine like the ASUS G701VI), and obviously you’ll get a smaller screen, but I think the slight drop in fidelity is probably worth what you’ll save in cash, not to mention back strain.