Earlier today, we brought you the Macquarie Quant Team’s picks for Melbourne Cup 2017. Now that the race has been run, we have the actual winners. Here they are!

Update: So how did the Macquarie Quant Team’s predictions pan out? Here are the winning horses from Melbourne Cup 2017.

And here are Macquarie’s top horses based on the unbiased odds using the Halpha model.

One out of four ain’t bad. Or is it terrible? We don’t bet much, so really have no idea.

The Macquarie Quant Team put together their picks for the Melbourne Cup every year based on some pretty complex statistical modelling. I’m not much of a betting man, but if I was, I would say that using maths and statistics to pick the winner is a pretty good way to go about it. Here are their predictions for Melbourne Cup 2017!

To determine the winner of the 2017 Melbourne Cup, Macquarie’s Quant Team did a fair bit of statistical modelling using the Halpha model, which is a formula the company uses to predict the big wins in the sharemarket. By plugging in the results of over 7000 races, the team was able to come up with two sets of results. One based on picking a horse with the highest likelihood of winning according to the Halpha model and one based on value.

How To Watch The 2017 Melbourne Cup, Live And Online And Free

Want to watch the Melbourne Cup live but don't have a TV in your workplace? Here's everything you need to know about watching the race that stops a nation live - from the various TV options to Twitter's global live stream. We've also included all the important Melbourne Cup links and race times to make life easier, along with overseas viewing tips. Game on!

So let’s not mess around, Macquarie’s top horses based on the unbiased odds using the Halpha model are:

The value model is a little more interesting though. In this model, the likelihood of winning is greater than the market value, so the more undervalued the horse, the better it is. The infographic below shows the horses that are the best (and worst) value: 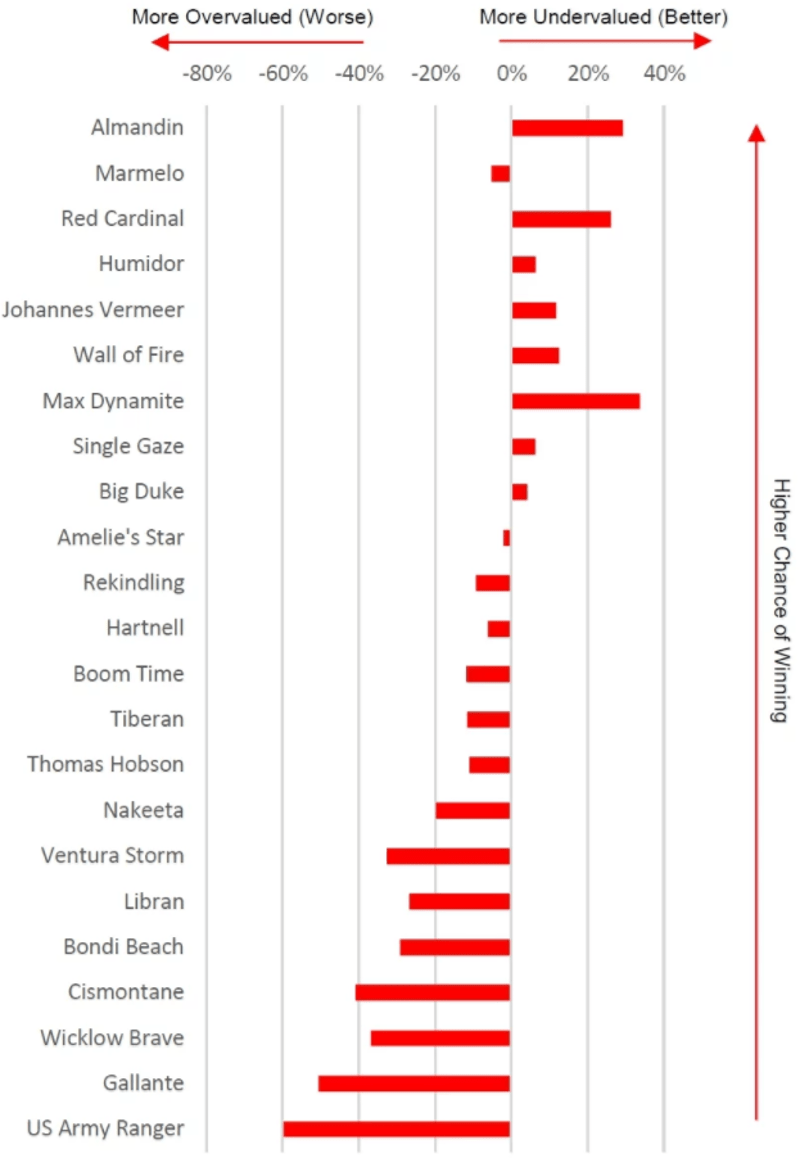 In this case, the top five are:

My pick? Johannes Vermeer. He was a quality Dutch painter from the sleepy town of Delft in the Netherlands, a place that I personally visited in 2015. Johannes Vermeer (the horse, not the painter) is running out of barrier seven. I did my own maths based on these numbers and arrived at: ( 2 + 0 ) + ( 1 x 5 ) = 7. 2015 = 7. Vermeer (the painter, not the horse) also painted the incredibly famous ‘Women Reading A Letter’. Apparently that letter she is reading is the odds to the 2017 Melbourne Cup. All signs point to a solid win for the Irish-born, Dutch-named equine-dynamo.

The horse also comes from Ireland which features the colour orange in its flag – the national colour of the Netherlands.

That’s as good a pick as any.