How To Filter Fake Evernote Spam Out Of Your Gmail Inbox

Evernote has a bit of a malware problem. For the past few years (starting in early 2014) spammers have been sending fake emails that claim to come from the note-organising service but include links to install malicious software on your computer.

Here’s what you need to know to avoid those phony Evernote emails or filter them out of your inbox completely.

How to Spot a Fake Evernote Email 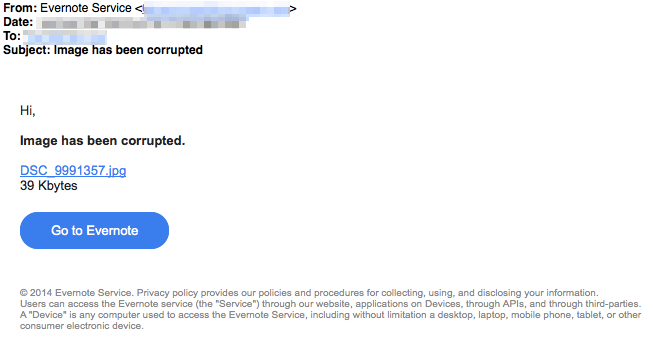 An example of a fake Evernote email with a malware link

An example of a fake Evernote email with a malware link

The simplest thing to do is to screen all your Evernote emails. The company notes that all official emails it sends will come from one of three domains: @evernote.com, @emails.evernote.com or @discussion-notification.evernote.com. If you’re using the company’s separate Chinese service the official email domains are @yinxiang.com and @emails.yinxiang.com.

How to Filter Them Out Entirely 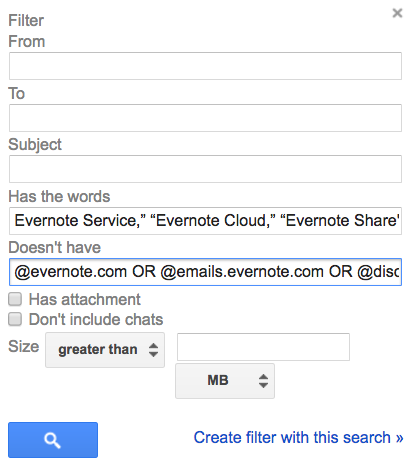 If you don’t trust yourself to spot every piece of spam, you can also use Gmail to filter out those phony emails for you. All you need to do is create a filter that blocks anything not from those approved email domains. You can also set it to ignore commonly used fake sender names such as Evernote Service, Evernote Cloud and Evernote Share.

The trick is to specify that any of the official email domains are fine. To do so, go to the Doesn’t Have text bar in Gmail’s filter settings and copy in all the approved domains with an “OR” or “||” in between each of them – just like in Google Search. That will tell Gmail to filter out any Evernote emails that don’t come from an official company address.