I Used Tesla Autopilot To Drive From Sydney To Orange

Autonomous cars are in the headlines every day these days, with several manufacturers working to have such vehicles hit the road in the next five years.

I was fortunate enough to recently drive a top-of-the-range Tesla for a trip from Sydney to Orange in the central west of NSW. I tested the Autopilot feature thoroughly over the 520km return journey and found the experience unnerving at first — then comforting.

While electric car maker Tesla is careful to say its Autopilot feature is not (yet) autonomous, it is very sophisticated compared to anything else currently in the market. Tesla chief Elon Musk even promised that cars currently in production would already have the hardware capable of self-driving, ready to be switched on whenever the software and government regulations allow it.

Musk also said publicly late last year that a Tesla car, as a demo, would self-drive from Los Angeles to New York City by the end of 2017 – although it’s not currently known whether this deadline is on track to be achieved.

Tesla lent me the Model S P100D all-wheel drive, which had only done about 250km when I took possession. The Model S is the sportier shape compared to its other Model X, which is a taller SUV. The cheaper Model 3 is not yet available in Australia. 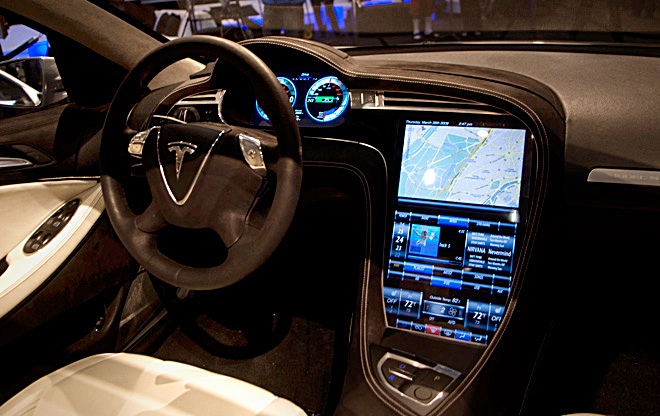 This Model S featured the ludicrously named “Ludicrous Mode” that allows acceleration from 0 to 100km/h in just 2.7 seconds, which makes it pretty much the fastest car a normal consumer can buy. With options added on, the particular Model S I drove was worth about $300,000 out of the showroom.

The Tesla has a radar that is always keeping track of objects around it, regardless of whether Autopilot is on or not. The driver’s dashboard graphically shows what the car detects, as well as whether the car is picking up lane markings.

The car also uses map data to work out what speed limit the current road has, which is very handy for general driving but obviously essential when Autopilot is activated. 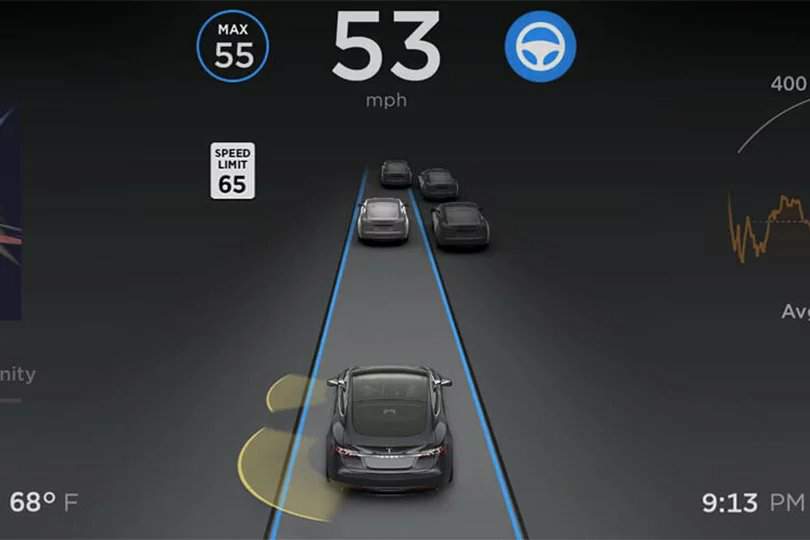 Tesla cars, provided you purchase the add-on software, come with what it calls “adaptive” cruise control, which is a bit like a “halfway” Autopilot.

Like traditional cruise control, you set the speed at which the car should go — but the computer is sophisticated enough to slow down when you’re getting too close to the car in front or if you’re going downhill and in danger of exceeding the speed limit.

It’s ideal for using on motorways that have some competing traffic because you don’t have to deactivate the cruise control every time you encounter a cluster of cars. The feature makes conventional cruise control, which can only accelerate and not brake, seem absolutely primitive.

For people a bit nervous about Autopilot this is a nice compromise.

Autopilot is not available all the time

Before the Autopilot is even available to be switched on, the Tesla’s radar and computer must be satisfied that it is safe to do so. The main criteria are that the car is on a motorway (as local roads, with all its obstacles and stop-start nature, are not yet suitable for the feature) and that the car can clearly pick up the lane markings.

When the prerequisites are met, the dashboard indicates Autopilot is available. I first switched it on in a 110km/h zone on the M4 motorway in western Sydney. The car started controlling the acceleration, braking and steering by itself.

“Isn’t that amazing? Our kids’ generation will think it’s ridiculous that we had to drive our own cars,” said my wife.

Because it is not a fully autonomous system, the driver must keep their hands on the steering wheel. The Tesla actually keeps track of this and sets off warning beeps if it detects the hands have been removed for too long.

Autopilot is slightly terrifying when you first activate it, just from the fact that it goes against every instinct and muscle memory you’ve been taught about driving.

The feature is also terrifying for defensive drivers like me that like to keep a good distance away from the car in front. Even though you can adjust how much space you want Autopilot (and adaptive cruise control) to maintain, even at the highest setting I felt uncomfortable at how close I was to the vehicle in front – especially travelling in excess of 100km/h.

However, you start to get over that feeling after you see Autopilot perform. You have to trust that the car’s computer has far better reaction times than a typical human, so it doesn’t necessarily need the extra space.

As soon as the conditions are not right for Autopilot – like if it’s having trouble detecting lane markings or highway conditions have ended – the Tesla alerts the driver to take control again.

After experimenting with Autopilot along the M4 then onto the Great Western Highway into the Blue Mountains, my wife was so impressed (as a passenger) that she said she preferred the Tesla taking control to my own driving.

On the return trip, I ended up using Autopilot for most of the way from Emu Plains to Parramatta, and even enacted the automatic lane change feature – which, again, is terrifying on the first go. Then on subsequent lane changes you’re simply impressed with the confluence of technology that allows a car to detect side lanes, check blind spots and steer it into a new lane on a curvy road.

Does the Tesla care about weather?

There were reports last year that radars in self-driving vehicles have trouble detecting adjacent objects when it’s raining or snowing. However, a software update rolled out in June was meant to have fixed this in Tesla cars.

Fortunately, the weather remained dry for the days I tested the Model S. However, I drove at over 100km/h on country roads in the NSW central west late at night when it was icy and misty – and neither Autopilot or adaptive cruise control had any issues.

After you plot a route on the GPS, the car estimates how much battery power you would have remaining upon reaching the destination. With 580km of charge in Sydney, I should have still had plenty of power after a 280km journey to Orange.

However, high speed driving – like Ludicrous Mode – can drain the battery, as can cold temperatures. The second half of our drive to Orange, through the plains west of the Blue Mountains, took place in 0 to 5 degree Celsius air late in the evening.

Upon arrival in Orange, the car was down to just 120km of charge.

The other trouble with charging is that it can be awfully slow if you’re not near your home charger or a supercharging station. Supercharger stations allow Tesla cars to receive a quick charge – about 50% in 20 minutes or 75 minutes for a full battery – for long distance driving or when a rapid boost is needed away from home. 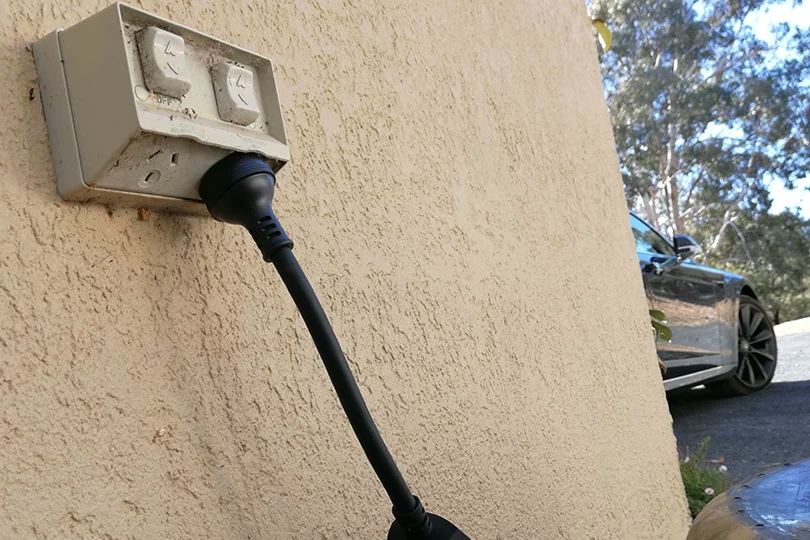 You don’t want to get out

A $300,000 car should probably impress passengers as well as the driver, and while I’m no motoring expert, the Model S feels luxurious.

From the leather seats (with heating electronically controlled through the touchscreen), to the built-in SIM card giving the on-board GPS and entertainment computer free internet access on the Telstra mobile network, to a Spotify service allowing you to play almost any song you could think of, the car is a lot of fun to be in.

Mind you, like any computer, Tesla’s computer can freeze. When the touchscreen – which controls everything from the GPS to the entertainment to the air conditioning — did exactly that, there was a 2001 A Space Odyssey-like panic before we found a way to reboot it. Phew.

And because the car has no engine (the Tesla dealership staffer said there are only 18 moving parts in the whole Model S), there is a front boot to put your luggage in. Seriously cool to show off.

Autopilot is certainly not self-driving and can cause some anxiety while you’re getting used to it. But once you trust the remarkable technology, you realise that autonomous vehicles are no longer science fiction and it is not just marketing hype to think that we will see it within the next few years.

My wife and I are not luxury motoring enthusiasts by any means, but after driving the Model S we made a promise that our next car would be electric. We will be keen to check out the Tesla’s budget Model 3 when it becomes available to Australians (possibly) next year.

The journalist drove the Model S P100D courtesy of Tesla.