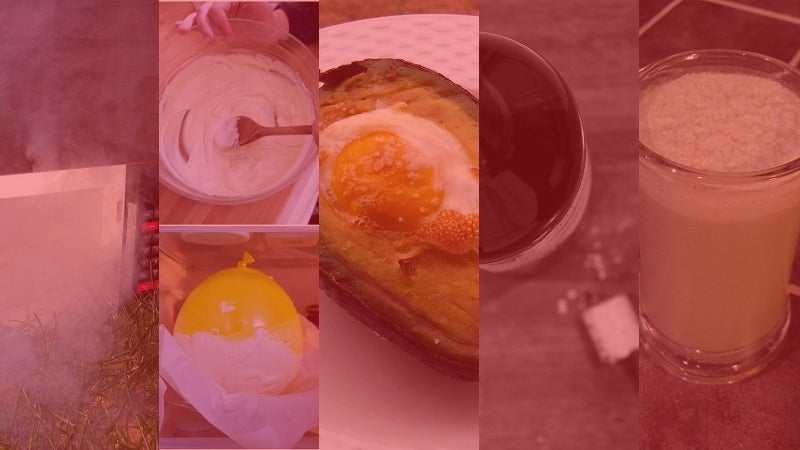 Last week, readers told us their biggest life hacking fails, and some of them were truly spectacular. So good, in fact, we just had to share them with you. You'll laugh, you'll cry, but you'll mostly just be glad you didn't try out any of these hacks yourself.

These stories have been edited for grammar and length.

The one with the nice rack, from Jägs:

Per this Lifehacker post, I attempted to do the same in my garage. Here's a pick of the immediate results: 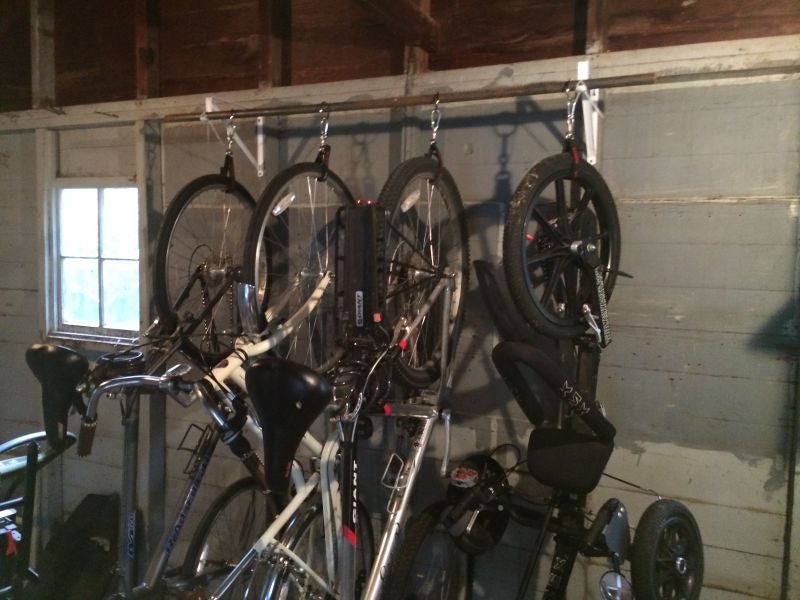 I was pretty pleased. The next morning, I went into the garage: 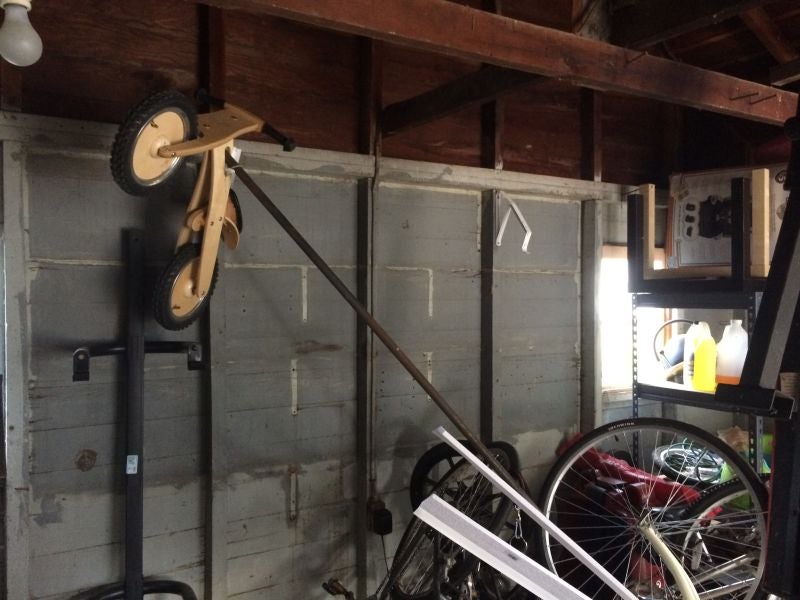 Though the shelf supports were rated at over 100lbs [45kg], they failed miserably. I found some heavier-duty ones and haven't had any problems since.

The one with the mess-cato, from TJ:

Watched a video on how to Sodastream wine to make bubbly. This… this was a mistake. Roscato was EVERYWHERE.

The one with the eggy avocado, from Mr P Is Mad Wack:

The GD baked avocado with the GD egg in it.

The hack was supposed to be: Half an avocado, spoon out a little more from the seed pit, and pour in uncooked scrambled egg. Bake and you'll have a cooked egg inside a delicious Pinterest-worthy breakfast! It turns out to be revolting. Temperatures that cook egg make avocados disgusting and the egg doesn't really even cook. I've been gagging just writing this and thinking about it.

The video was one of the most misleading things I can think of. Egg doesn't fit, gotta create a base to bake it, takes at least 12 times longer than the video implies, and is about as tasty as just cooking an egg and putting it on top of an avocado.

And bury me at makeout creek offers a warning:

I made it once. The avocado turned bitter and the egg was this very odd consistency. Looked and felt like those rubber fried eggs you'd get in a "let's play pretend" cooking toy house.

The one with the DIY Soylent, from Matt:

I wanted to try Soylent to see if I could gain all the "awesome" benefits I had read about. Problem was, Soylent was on back order and wouldn't ship for a month. I went the DIY route and bought all the ingredients off Amazon to make my own. A 50lb [23kg] bag of corn meal, [10lb] 5kg of salt and flax seed, a gallon [4L] of olive oil, etc., you get it. I tried hand mixing the ingredients which were all in metric and I'm trying to convert them to US. Then I switch to my $200 [$AU261] blender, which almost breaks due to the consistency.

After I finally get this "Soylent" blended, all the people say to let it chill for 24 hours to make it taste better, but I figure I can handle it. I pour myself a glass, excited that I won't be making dinner that night, and I take the first swig... It's like warm concrete going down my throat. I struggle to get it down. The second gulp has to be better. Wrong. I have to fight my gag reflex. I barely got through half the glass before pouring it out. I even tried again in the morning with the same results. Only this time the concrete was cold. I spent $200 [$AU261] on Soylent ingredients only to be able to drink 4oz [113g].

The one with a poor grasp of physics, from beaker :

Was making cheese on toast in a hotel room by lying the toaster on its side. Sounds clever but forgot it will 'pop up' when its done ...or sideways in this case.

The one with eyes wine shut, from Carrie Mathison:

I was in the middle of making tomato soup which is lovely with red wine in it, and I had the bottle but only realised just when the soup was already on the stove that I wasn't sure where the corkscrew was. So I go online and find "tricks" for otherwise opening wine bottles. I think I was too nervous for the "stick it in a shoe and womp it on a wall" trick so I went with jamming a knife in it and twisting to pull it up. It worked at first, but before long I was pushing it down somehow, and destroying the cork in the process. So I went with the last-resort and just pushed it right down into the bottle because I was so frustrated and needed my wine-tomato soup.

Next thing I know my eyes are burning and there's 1/3 of my bottle on me (my face and my top, which was fortunately red so the wine wasn't too dark), the table, and a small spot on the ceiling between blades of the ceiling fan. The top just barely survived after more internet hacks and there's still a few droplets on our ceiling since I didn't even notice it was there until it was too late.

The one with th — POP! white chocolate surprise, from Jeffj:

Attempting to make a hollow white chocolate sphere — following very explicit directions from the internet — by dipping a latex balloon into molten white chocolate. The ensuing explosion left little blobs of white chocolate in places you can't even imagine!

The one with the really hot panties, from mrgoodbeer:

Fresh out of college, my live-in girlfriend and I visited my mum. We stayed the night. I don't recall why, but we brought some laundry and my mum's dryer wasn't working very well. Come morning, her clothes that were running in the dryer overnight weren't quite dry, and she didn't have dry underwear for the ride home. I, with my basic knowledge of how a microwave works, figured a quick nuke would heat the water in the damp panties up so that they could steam out and hang dry over our morning coffee.

I didn't count on the elastic or decorative metal thread in the waistband. In only a few seconds they were a molten scrunched pile starting to flame. Despite the embarrassment — more-so in my parents knowing their son with his new scientific degree just microwaved a flaming blob of panties — we survived, had some kids, and settled in the exurbs.

The one with the accidental cocktails, from Some Guy on the Internet:

When you're low on freezer space and you're trying to chill, say, a bottle of vodka quickly, you can clear out some of the ice in the ice maker and put the bottle in there. And if you forget about it in there, you'll eventually start spiking your ice cubes unexpectedly.

The one with little miss perfect, from masterhab:

I saw an art project where you line up a bunch of Crayola crayons along a white canvas, then melt them with a heat lamp so they drip down and make this cool rainbow effect. It ended up looking like brown mush and I guess I left it too long, since almost all the wax had dripped off the canvas and down over all my important work documents on my desk.

Just to piss me off more, when I went to my sister's I saw she had tried the same project and executed it flawlessly.

The one with the extra-crispy bacon, from former Lifehacker EIC Whitson Gordon:

Back when we were dating, my now-wife invited me to her family's house for Easter. I don't remember if this was our first or second holiday together, but it was definitely relatively early in the relationship. It was a big brunch, and her mum didn't have enough space on the stove for all the bacon, so her brother suggested we cook it on the grill using aluminium foil. Apparently this is a thing that is supposed to work. I was sceptical, but he insisted.

He helped set me up at the grill and then told me to basically stay with the bacon and keep an eye on it while he helped inside. All seemed to be going well until the flame got a little too high. My wife-then-girlfriend was like "hey, watch out for that flame..." I turned to her and said "Don't worry, aluminium foil doesn't catch fire...right?" Well as I said that, SOMETHING caught fire. Still not sure if it was the foil or all the bacon grease, but that flame was definitely growing, and turning off the burners did not help because it had already started spreading across the bacon.

So she turns around to the screen door where the family is all cooking, playing with kids, etc. and calmly says "I don't want to alarm anyone, but there's a bit of a fire here, someone wanna help us out?" Of course no one is listening, so she says a little louder "Hey guys, there's a fire..." No answer. Finally she yells "FIRE!" her mum realises what is happening and, thankfully being more up on fire-dousing life hacks than I was at the time, grabs some baking soda and douses the flame with it. This all happened in the course of about 20 seconds.

And that's the story of how I almost burned down my in-laws house on Easter.

Epilogue: During the aftermath, her brother came out of the house and said "Well did you at least save the bacon?" Sadly, the bacon was half raw, half charred, and covered in baking soda.

Thanks to all who submitted! If you missed your chance to submit for this round, feel free to share your pain in the comments below.