How Elon Musk Plans To Go To Mars

SpaceX plans to build a "self-sustaining city" on Mars, company founder Elon Musk announced today. But, while we now know a lot more about how SpaceX plans to get to Mars, details about how people will actually survive up there remain sketchy. Musk dropped the news during an address at the International Astronautical Congress meeting in Guadalajara, Mexico, where he had promised to reveal how the company planned to send people to live on Mars. Today, we finally got the first news of how he intended to do that.

"I don't have an immediate doomsday prophecy," said Musk, but noted that he saw only two possible paths forward. "One path is to stay on Earth forever and there will be some extinction event. The alternative is to become a multi-planetary species, which I hope you will agree is the right way to go." 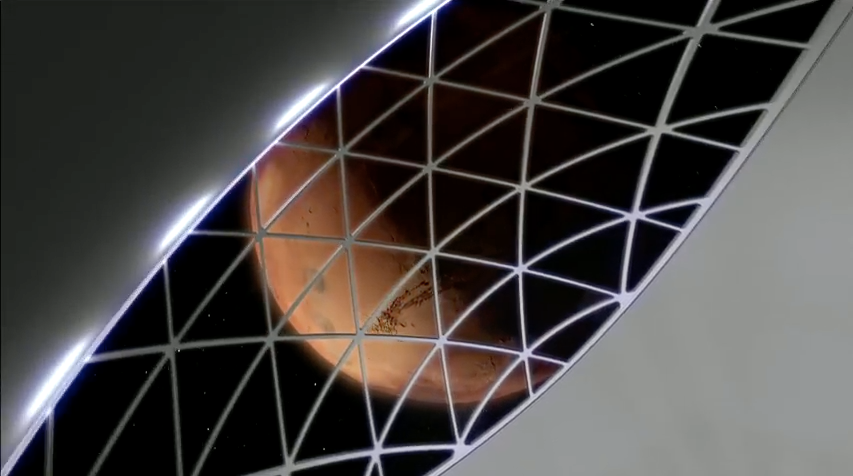 A view of Mars from inside the spaceship (Image: SpaceX)

The plan comes less than a month after the company's rockets were grounded after a mysterious explosion caused a Falcon 9 to burst into flames on the launchpad. Since then, the company has released the results of an initial investigation, tracing the fire back to a breach in the rockets helium supply, and announced that it plans to take to the skies again by November.

Right before the presentation, SpaceX released a mini-preview of what we could expect from its new Interplanetary Transport System — previously called the Mars Colonial Transporter, until just a few weeks ago, when Musk changed the name after suggesting that it could take us even beyond Mars to other destinations in the solar system.

As I noted earlier, the video gives us a pretty good idea of the sequence of events for how the system would work:

In the video, first, we see the rocket lift-off from Cape Canaveral's Launchpad 39a with 13,031,698kg of thrust behind it. After stage separation, the spaceships parks in orbit while the booster returns to Earth — where it lands. A propellant tanker is loaded onto the booster to refuel the spaceship in orbit for its trip to Mars. The tanker returns to Earth and the spaceships heads for Mars. The solar arrays deploy and the ships coasts out on its to finally enter Mars' orbit. The ship lands on the Martian surface and then we get a glimpse of the astronauts looking out onto the Martian plains.

What we didn't see in the video, though, is any kind of infrastructure that would support those astronauts to keep them alive after landing. Now, it sounds like SpaceX intends to send colonisers to establish a permanent city on the Red Planet. With 1000 ships and 200 people per ship, Musk estimated that it would take 40 to 100 years to achieve a fully self-sustaining civilisation on Mars.

One of the big barriers to doing that, though, is the cost, which he estimated at $US10 billion ($13 billion). Musk detailed four methods that he believed would make a ticket to Mars a possible purchase — similar to, perhaps, buying a house — for many people. The four ways include using reusable rockets; refuelling the spaceship in space; and by using a methane fuel instead of traditional rocket fuels. Most excitingly, that methane fuel could be harvested on Mars itself.

We also learned quite a bit about the rocket itself, and what it would be like to actually make the trip. Just like we've seen previously with the Falcon 9, the rocket booster will land and be re-used. SpaceX has landed a number of its Falcon 9 rockets after flight, but hasn't yet flown one of the used rockets back into space. It initially intended to fly a used rocket by the end of the year. Those plans were derailed by the explosion this month and, although the company still intends to re-launch a used rocket, no firm date has been set. A key feature of this plan is to send their Mars rockets back into space, so seeing a Falcon 9 rocket successfully make a second trip will be key to convincing people that the plan is plausible.

We also learned details about the rocket itself and what the trip might be like. The rocket is going to be incredibly large, dwarfing even the company's Falcon Heavy and the world's previous tallest rocket, the now defunct Saturn V. 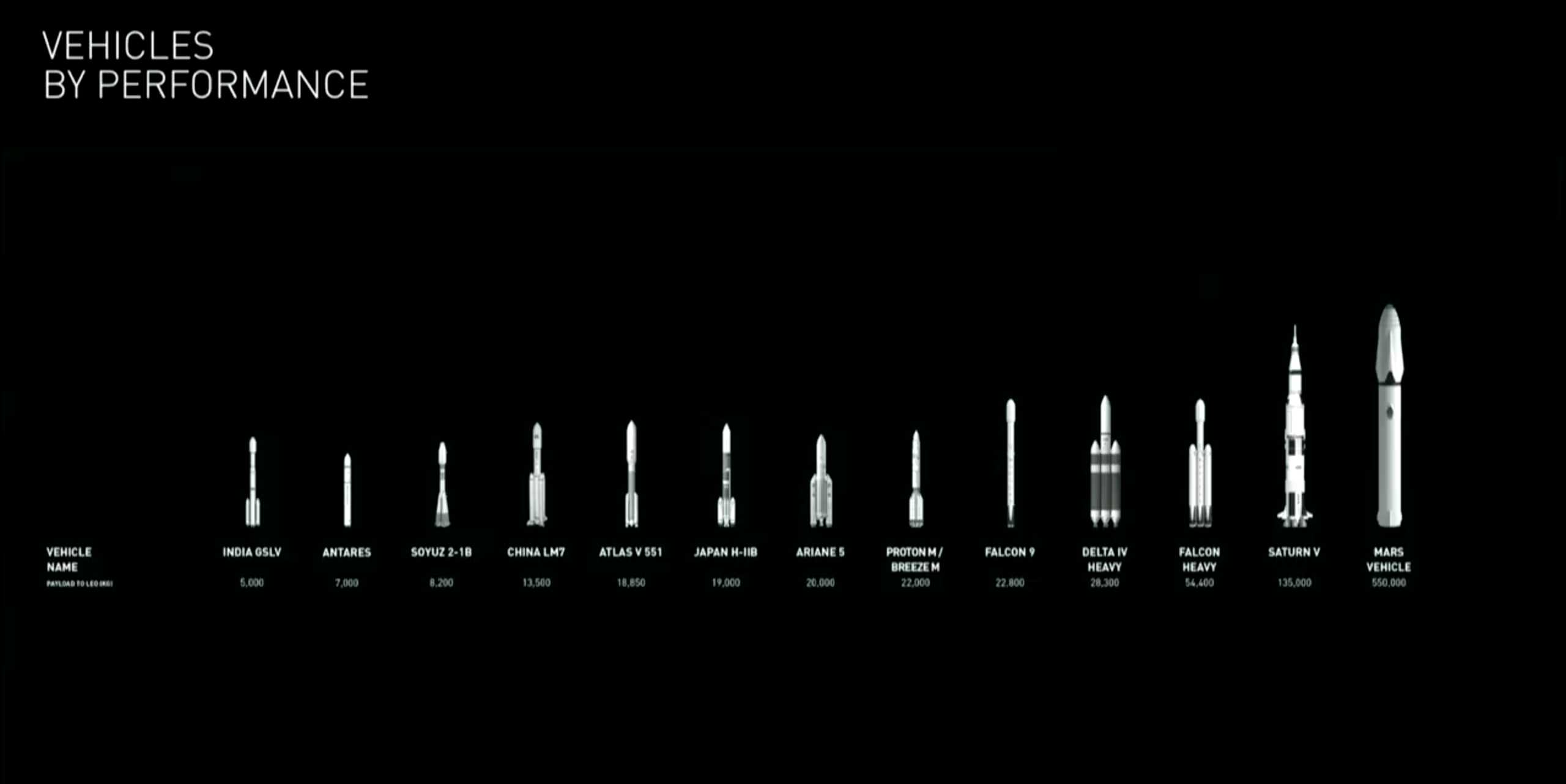 If being locked into a spaceship for months at a time with a bunch of your fellow humans sounds a little grim, though, Musk says not to worry. "It will be, like, really fun to go — you'll have a great time," he says. Key to doing that will be making the inside of the rocket comfortable for the long ride, which for initial trips will last 80 days. Musk says that he eventually believes a trip could be brought down to a single month.

But whether this is really doable depends a lot on whether SpaceX can actually get the money together. "I would say it's going to be a challenge to fund this whole project," Musk noted. He spent a lot of time today talking about the economics of an individual ticket, which he said could drop as low as $US100,000 ($130,453). But before he can sell tickets, SpaceX will need lots and lots of money before to get the infrastructure together.

Musk hinted that he would personally be devoting assets to the project. "I really don't have any other motivation for personally accumulating assets, except to make the biggest contribution I can to making life multi-planetary," he said. But even then, there would still need to be significant outside investment.

"I know there's a lot of people in the private sector interested in funding a trip to Mars, hopefully there will be interest in the government side as well," he said. "Ultimately this will be a huge private-public partnership."

How quickly all this could happen would, in large degree, depend on whether that funding comes through at all. But, if the money is there and all goes as planned on the technical side, Musk said we could see Mars flights begin as soon as 2023 — although he cautioned that the timeline was still in-flux. He also kept to SpaceX's original date for when we would see Red Dragon missions head to Mars in 2018, which will haul between two or three tonnes. 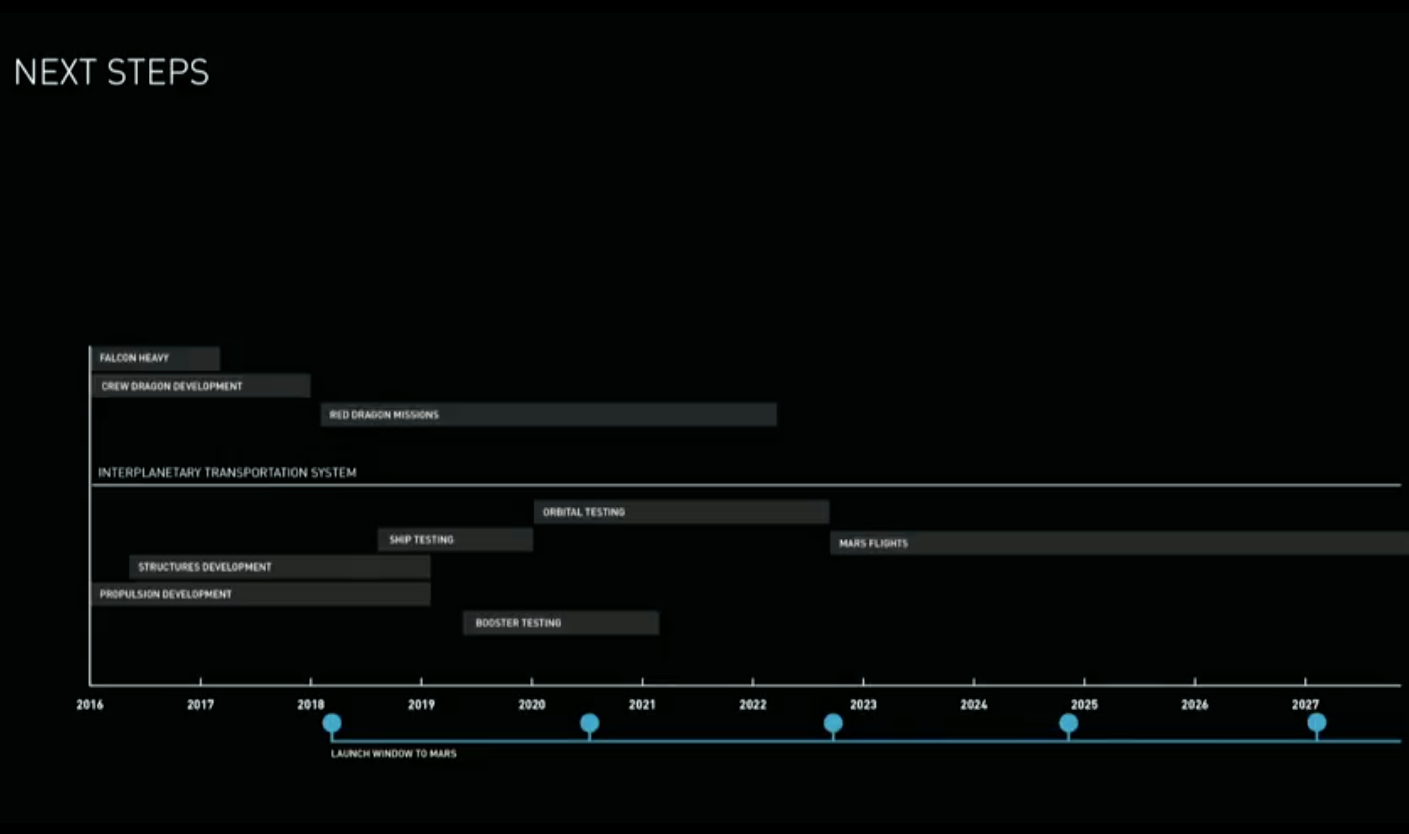 But — while Musk described the project as a "self-sustaining city" — we didn't heard about the kind of long-term infrastructure that would keep people alive once they got there. "The goal of SpaceX is really to build the transport system," said Musk, before suggesting that the Martian colonists themselves would do much of the building.

"Who wants to be among the first to build everything, from refineries to the first pizza joint?" Musk asked.

But before you can build a pizza joint, you need a whole lot of other things — like clean and usable water, a space hab capable of withstanding Martian environments, some kind of transport and presumably some more people to eat there. And who — if anyone — is actually going to put that basic infrastructure up, wasn't clear. But without it, the plan is unlikely to succeed.

For his part, Musk says that he'd like to make the trip to Mars himself — but only after putting together a Plan B for his company, in case of disaster. "I would definitely like to go to orbit and visit the space station and then ultimately go to Mars," he said. "I have to make sure if something goes wrong on the flight and I die there's a good succession plan and the mission of the company continues."

If SpaceX's plans to get to Mars do succeed, though, we could be looking at trips even further out. As I noted yesterday, Musk has hinted at the possibility of using this transport system to go to Mars but also beyond — and it appears that future plans could be heading that way.

"If we have a propellent depot, you can go from Mars to Jupiter, no problem," Musk said. "It means full access to the entire greater solar system." He noted a particular interest in travelling to Europa.

The first step, though, would be establishing regular travel — or even a first trip — to Mars. And to see if that's really possible, we'll have to wait.