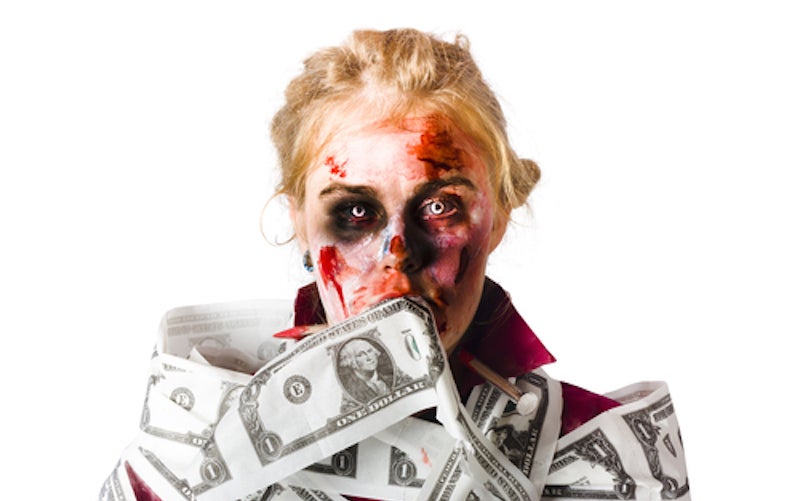 Recently on Last Week Tonight, John Oliver bought $US15 million ($20 million) in outstanding medical debt just to prove how easy it is to start a debt buying company. It was debt that regular people owed, presumably from surgeries, hospital stays, medical procedures and so on. Instead of buying the debt to turn a profit, Oliver forgave it. All of it. The segment outlined the many flaws of the debt and credit industry, but specifically the concept of "zombie debt", or old, forgotten debt that somehow resurfaces. Photo by Ryan Jorgensen - Jorgo

As legal site Nolo explains, zombie debt is debt that "is very old or no longer owed". It's debt that comes back to life when a collection agency buys it for cheap. It's not the same as maxing out a credit card and being unable to pay or being flooded with bills you can't haggle down. Zombie debt is often invalid, and collectors use intimidating, sneaky tactics to get people to pay.

Debt collectors make money when they buy old debts incredibly cheap and get people to pay a portion of the original amount that's bigger than what they paid themselves. Theoretically, that doesn't sound so bad, right? Collectors just help companies reclaim lost funds and, after all, we should all repay our debts. Fair enough.

In practice, though, debt collecting is a very shady business, and zombie debt exemplifies this. The US Federal Trade Commission (FTC) lists some common types of zombie debt:

It's easy to say, "If you have past debt, you should pay it." Zombie debts don't work this neatly. As the FTC points out, they're often the result of identity theft and they can even be debts you've already settled.

How Debt Collectors Get Around Time-Barred Debts

Find Law Australia warns that you can restart the clock on the debt's statute of limitations if you make (or just promise to make) payments. This is important because it's how debt collectors turn a profit.

"Statute of limitations" means debt collectors can sue you for a limited amount of time to collect your past due debt. After that time, those unpaid debts are "time-barred," and a debt collector can't sue for time-barred debts. This time frame — the statute of limitations — varies depending on your circumstances. There is a six year time frame since you last made payment or admitted you owed the debt, and a 15 year time frame if a court judgement was entered or the debt is in relation to a mortgage.

When you restart the clock, collectors can sue you, and many of them do. When consumers ignore these lawsuits, which happens often, they have to pay up, which can lead to wage garnishment.

How to Deal With Zombie Debt

Debt collectors can be nasty. They use all sorts of tactics (and in some cases, intimidation and outright lying) to intimidate you into paying, from calling you nonstop to contacting your friends and family members.

Under Australian Consumer Law, debt collectors are not allowed to use physical force or coercion, harass you, use misleading or deceptive conduct or take unfair advantage of a vulnerability you possess (such as a disability). So if you're dealing with an agency breaking the rules, you can report them to the ACCC. Also, abusive or threatening language are also red flags, so make sure you don't have a scam on your hands. The ACCC lays out your rights in dealing with debt collectors.

Assuming the agency is legit, your next order of business is to tackle them head on and make sure the debt is valid. Check out your credit report and see if the debt is listed. If not, the zombie debt may be a result of identity theft, and you can write a letter to dispute the debt.

From there, ask for a "Validation Notice". Debt Fix explains how this works:

Debt collectors must send you a written "validation notice”" within five days from first contacting you about the debt. The validation notice must tell you what you owe, to whom you owe it and how to pay it back. After receiving the validation notice you can write back to the collector if you believe you don't owe the debt or otherwise dispute the amount. You have to do this within 30 days from the day when you receive the notice. After that, the debt collector cannot contact you again until it sends you written verification of the debt, usually in the form of a written bill or copy of a legal judgment.

To avoid restarting the statute of limitations, don't even discuss the debt until you receive that notice.

In most cases, dealing with zombie debt is easier said than done. A quirky television host might come to your rescue, but don't count on it. At the very least, you should familiarise yourself with your credit report, know the statute of limitations on any past debts and understand your rights.