Settle Down, Your Hot Drink Isn’t Likely To Give You Cancer

The World Health Organisation announced today that hot drinks probably cause cancer. That does not mean that the hot coffee in your hand right now is going to kill you. This announcement comes with a lot of caveats, and most of us are probably in the clear. Photo by waferboard.

First, a quick reminder about what “probably causes cancer” really means. The WHO’s cancer research group puts items on that list if they “probably” have some kind of link to cancer, even a very small or weak link. Very hot beverages share this list with the pesticide glyphosate, but also with red meat and with shift work that disrupts your body’s sense of night and day. The news on very hot beverages is being published next to an editorial that says just because the WHO calls something carcinogenic, doesn’t mean everybody agrees.

There’s even some good news with this announcement: Coffee and another hot caffeinated drink, maté, are no longer considered carcinogens by the WHO. Coffee actually has health benefits, so it’s totally fine to keep drinking your cuppa. That means that headlines like these, while not incorrect, look a lot scarier than they really are: 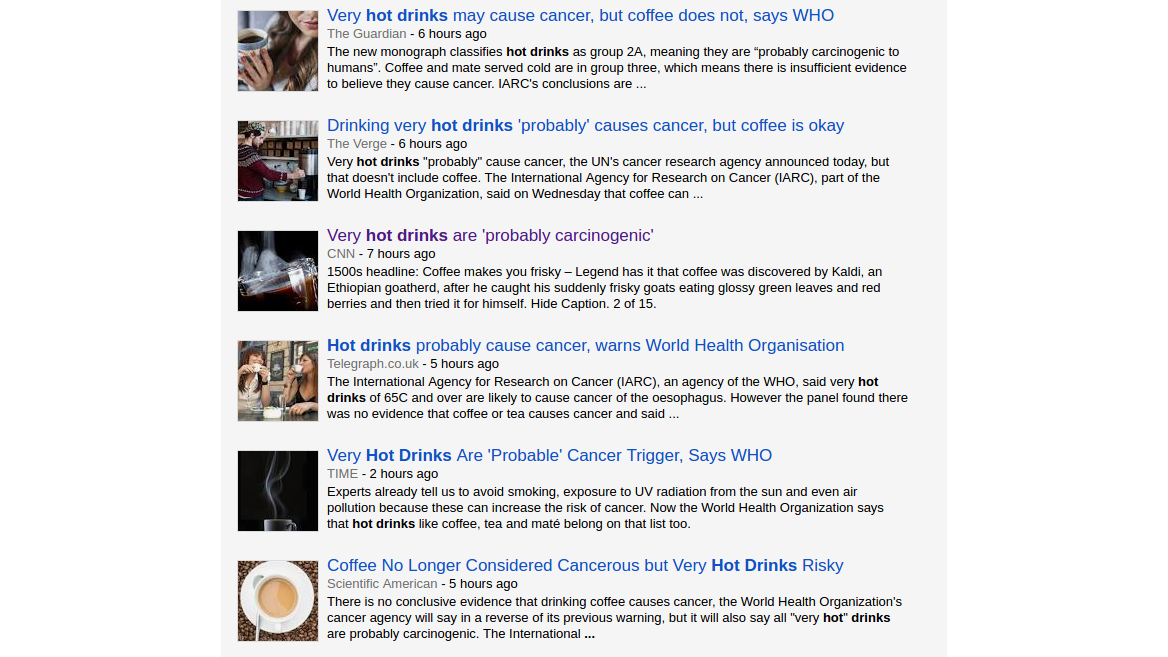 The problem the WHO identified is just that drink temperature seemed to increase the risk of esophageal cancer. The evidence isn’t ironclad, either. Here’s how they describe the findings:

This was based on limited evidence from epidemiological studies that showed positive associations between cancer of the oesophagus and drinking very hot beverages. Studies in places such as China, the Islamic Republic of Iran, Turkey, and South America, where tea or maté is traditionally drunk very hot (at about 70 °C), found that the risk of oesophageal cancer increased with the temperature at which the beverage was drunk.

In experiments involving animals, there was also limited evidence for the carcinogenicity of very hot water.

How hot is “very hot”? The WHO’s temperature of 70C is within the range that coffee shops typically serve. By the time your drink cools down, though, it’s probably below that. CNN reports that Americans and Europeans don’t usually drink beverages hot enough to be considered higher risk. If you want to be sure of your drink’s temperature, though, consider adding some milk.