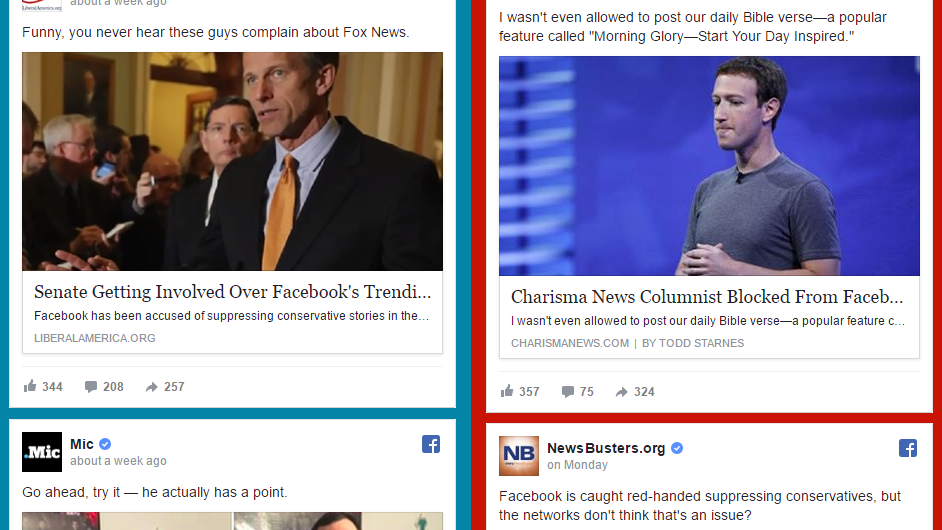 We all choose to follow the news outlets we like the best. To an extent, that's natural. However, as this interactive tool points out, it can be all too easy to slip into an echo chamber that reinforces extreme political viewpoints. This tool, created by the Wall Street Journal, shows posts from different news outlets that are classified as either "very conservative aligned" or "very liberal aligned". It is tailored to US politics, but the same principles apply regardless of country. The WSJ's tool doesn't cherry pick individual posts from each news outlet, but the outlets it chose are were chosen using data from Facebook research that compared the self-identified political alignment of 10 million Facebook users against the news outlets they preferred. The result is that each feed is an extreme version of what politically active Facebook users might see. The WSJ points out that this isn't meant to be representative of any one person's feed, but rather a bird's eye view of how the different political leanings can get wildly different versions of a story.

As you read through different topics, you'll probably notice that even when the feeds cover the same topic, they come to very different conclusions. Many may even be upset at the same things but for different reasons. In the most extreme cases, both blame the other side for the problems. Of course, we expect this in a representative form of government, but when you only see it from one side, it's easier to buy into the idea that the other side is the only one that ever does anything wrong. The WSJ doesn't claim that either side is particularly more or less guilty of this blame game (and for that matter, neither does Lifehacker), and frankly reducing politics to two "sides" is already pretty reductive. However, the tool offers a helpful and frustratingly rare look into how similar most of us really are.