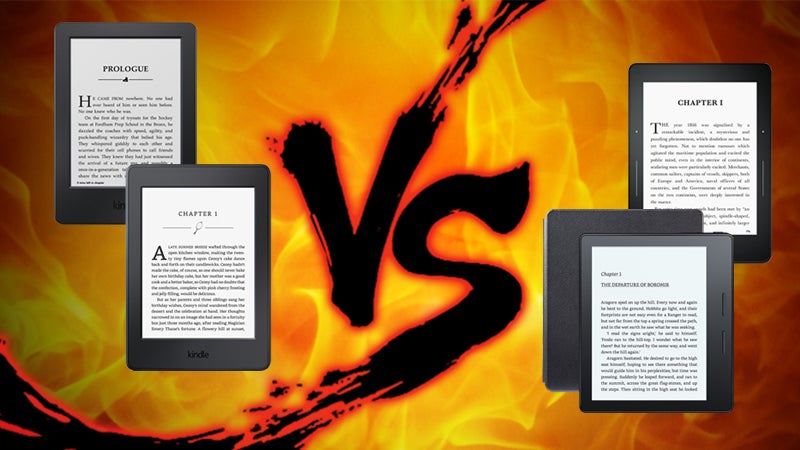 Amazon has somehow managed to create four different models of its Kindle ereader. Each of the four models has its own strengths and weaknesses, so if you're in the market for one — or an upgrade — let's take a look to make your buying decision a little easier.

It's no secret that Amazon has the lock on ereaders. Sure, the Kobo and Nook are still around, but the Kindle dominates the ereader space. Here's a quick overview of the four models available right now:

All four of these models have access to the Amazon Kindle book store and use Amazon's Whispersync technology to sync up your reading with the Kindle mobile apps and with Audible. They each come with 4GB of storage, and they all have the same software. Each of them has a similar battery life that typically lasts several weeks, excluding the Oasis' special charging cover.

All four models also require a $US20 ($26) one-time payment to get rid of the "special offer" ads on the screensaver. The user-experience on all the models is the same, so it's really just the hardware that differs.

The Model-Specific Features that Separate Each Kindle

Being ereaders, you wouldn't think you'd find a ton of distinguishing features between models, especially when they're all from the same company. However, Amazon's found a way to make each of these models stand on their own.

The base Kindle is exactly what you think of when you think of an ereader. It's small, has an e-ink display, and features a touch screen for turning pages, shopping in the Amazon store, and browsing your library. It is the only model that has a 167 ppi screen, which means it's the worst looking screen of the bunch.

The Paperwhite is essentially the regular Kindle, with a better, backlit display. The Paperwhite has a 300 ppi screen, the same screen as both the Voyage and the Oasis. It also comes with a four LED backlit display. This doesn't seem like a big deal, but between the improved resolution and the backlight, it makes reading on the Paperwhite a much more enjoyable experience. The backlight means you can read in darker areas without carrying around an obnoxious reading light, and the improved resolution cleans up the text quite a bit.

The Voyage is a beefed up Paperwhite. It has the same backlit display, but packs in six LEDs to provide more even light distribution across the display. That display has an adaptive light sensor that automatically adjusts the brightness based on the light around you. The Voyage also has a feature Amazon calls "PagePress" that allows you to turn pages by touching the case as opposed to tapping the screen.

The Oasis bucks the trend here a bit. It isn't exactly a better version of the Oasis, it's an ereader all its own. The Oasis has the same 300 ppi screen as the Paperwhite and Voyage, but its 10 LED lights provide even lighting across the display no matter where you are. That display does not include the adaptive light sensor of the Voyage though, so you'll have to manually change the brightness in direct or low light. The Oasis also comes with that previously mentioned charging case. Perhaps more importantly, the Oasis is the only Kindle with physical buttons for turning pages. It also has an orientation sensor so you can flip the device to comfortably read left or right-handed.

Size and Shape Are Mostly the Same, Except for The Oasis

As far as looks go, the Kindle, Paperwhite, and Voyage are all relatively the same design, size, and weight. The Oasis is the only one that actually looks any different.

There are minor discrepancies between the models. For example, the base Kindle is only 190g, while the Paperwhite is 205g. The Voyage has the touch buttons on the sides of the case for flipping pages and is about 0.3 inches shorter than the other two, but all told it looks pretty much the same as the Paperwhite at a glance. All three are pretty light, easy to hold one-handed, and fit into small bags easily. Heck, they're small enough that you can stuff one into the back pocket of a pair of jeans if you need to.

The Oasis is the odd duck here. First off, it comes with its own magnetic leather charging case. It's removable, but it's also packed in with the reader itself, so you're getting it whether you want it or not. Without the case, it's a bit lighter than other Kindles, at 130g. At 5.6" tall, the Oasis is almost a full inch shorter than the others. The Oasis tapers on the side to make it easier to hold one-handed and it's the only Kindle with physical buttons on the side for turning pages. Without the case, the Oasis is super light, which means holding it is a little easier, but none of the Kindles are heavy or large by any means. 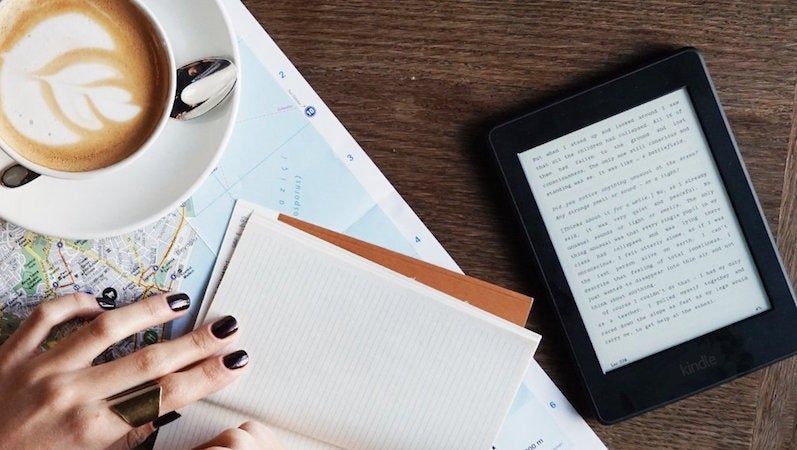 For most people, the Kindle Paperwhite is the perfect blend of a reasonable price and useful features. The backlight is a major step up from the base level Kindle and makes reading a much more pleasurable experience. The screen resolution is a big improvement that's worth the extra cost of the Paperwhite compared to the base Kindle. If the price tag is a little steep, you can usually find it refurbished or used for cheaper.

We can't say the same for the Voyage or Oasis though. These are luxury Kindles at luxury prices. Which isn't to say they're not great, but it's hard to justify the price unless you have cash falling out of your pocket.

If money wasn't an option, our friends over at Gizmodo say the Oasis is the best ereader available right now, but they also note that it's weird the Oasis doesn't include the ambient light sensor of the Voyage. Conversely, the Voyage doesn't do nearly enough to justify the price compared to the Paperwhite. The ambient light sensor is a neat addition if you read in a variety of places, but it's not worth the extra $80. Likewise, the haptic feedback on the case is handy, but it doesn't work as well as it should, and that's kind of besides the point considering you can also just move your finger a half an inch to tap the screen.

With all that said, both the Voyage and Oasis are luxury Kindles for a specific target audience: serious bookworms with lots of cash to burn. The Oasis is easily the winner here, with recommendations from PC Mag, Gizmodo, Time, and Wired. So, if you're looking to blow an absurd amount of money on an ereader, go with the Oasis over the Voyage.

For the rest of us, the Paperwhite is the clear winner.