A Butcher's Six Secrets For Saving Money On Meat 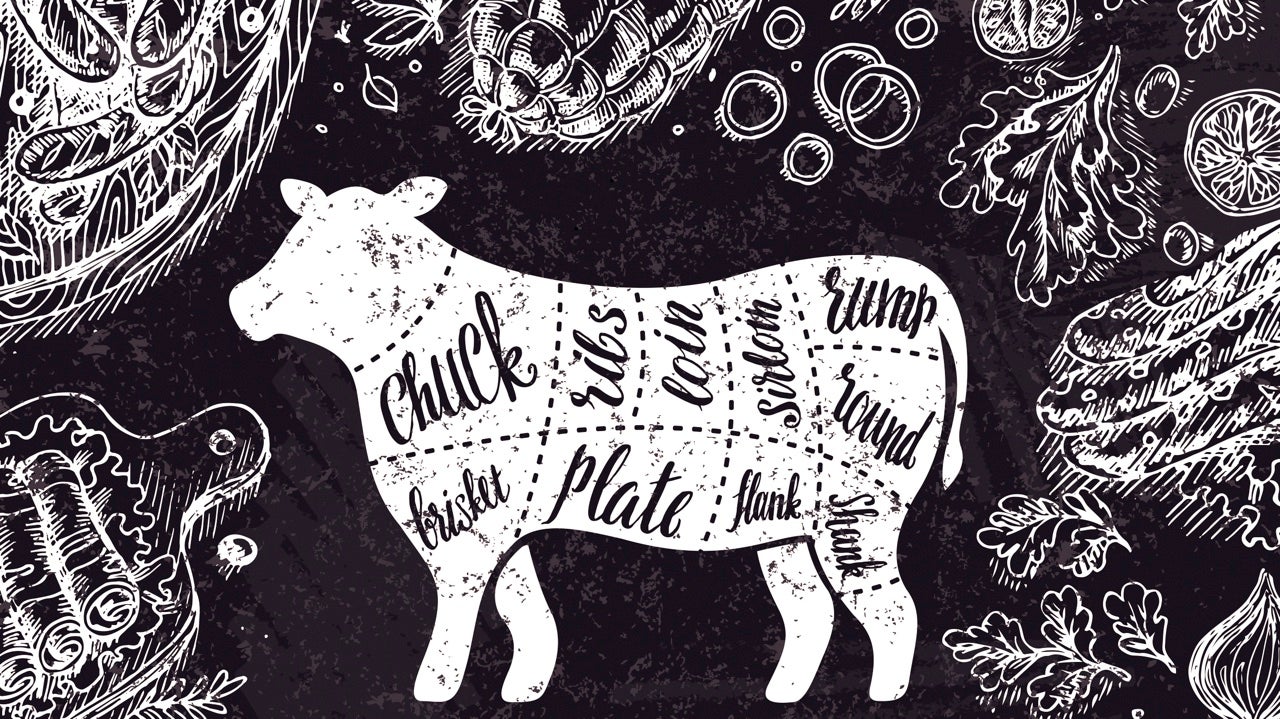 When I think about thrift and meat — specifically in the US, but increasingly in areas like Europe and Australia — the first thing that comes to mind is the devotion folks have to tenderness. This tends to be the Holy Grail quality people look for in meat. To me, this is a backwards approach to quantifying the quality of meat. This post originally appeared on Credit.com.

What we really should focus on is the flavour of meat. Meat — literally, the muscle tissue, fibres and so on — has very little inherent flavour. (Most of the flavour we experience when eating meat comes from the fats in and around the muscle fibres.) The flavour that does exist in muscle tissue develops, mainly, from two things: activity and older age. Tenderness comes, mainly, from two things: confinement and younger age. I think you can see which one plays into the hand of the commercial meat industry. As they produce animals that grow faster and faster, they get them to market weight quicker and quicker, but the result is lacklustre flavour.

What we are forgetting is that you can address the issue of texture (tenderness) postmortem (after death). You can never infuse more of the meat's natural flavour into the meat postmortem. If we began focusing on developing flavour in living animals, we could still achieve desirable tenderness for an end product. But, it would turn the current industry approach on its head. (Not that that would be a bad thing.)

I should also add that, contrary to popular belief, the meat from older animals is not inherently undesirable in texture. I address this in many of my workshops.

I bring all of this up because there is an irony in how meat is priced. You pay more for tenderness, but the more affordable cuts are, more often than not, the more flavourful options. Thus, if you know what to do with a cut, you'll get more for your dollar while also producing more flavourful meals.

Here are my tips for using these factors to your favour when it comes to spending less on meat.

Nothing cuts down on the expense of meat in our food budgets like reducing our intake. Meat is often the most expensive ingredient we purchase. It's also the one that we overindulge in more than anything else (except sugar). We eat far more meat than our bodies require, impacting our health as well as the resources that sustain the animals.

When considering a portion size, choose 110g to 170g. Move away from the large format single-portion cuts, like thick-cut chops and steaks. Instead, share them amongst multiple people, or purchase cuts that allow for smaller individual portions.

Fill the vacated space on the plate with vegetables, and cook them in healthy fats like olive oil, coconut oil or lards and tallows rendered from healthy animals. The vegetables will provide you with more nutrients, and the fat helps you feel sated longer without the digestive stress that large amounts of meat can cause.

When you purchase a whole animal you are saving a considerable cost based on the direct connection to the farmer. You cut out a large portion of the overhead and middleman costs attached to meat while giving as much money to the farmer as possible. You also know more about where that meat has come from, if that concerns you.

Smaller animals, like poultry or rabbits, are purchased whole and easily butchered at home. Larger animals, like sheep, pigs or cattle, can be purchased as whole, half, or sometimes quarter carcasses. The carcass is butchered into manageable, recognisable cuts, then frozen for home storage.

Furthermore, whole animals offer an opportunity to work with foundational cooking components that are otherwise unavailable or more expensive when purchasing stand-alone. This includes bones and fat, two of the most important ingredients in nutrient-rich and flavourful cooking. Turning bones into stock is quite easy, and rendering fat, which can take some time to refine (no pun intended), are both worth the passive time.

Now, just because we can buy a whole animal does not automatically mean that it is sourced from local farmers. When we look to smaller animals, like poultry and rabbits, the vast majority are coming off of commercial operations. In that case, it's good to look for some measure of production quality, whether it be humane certification — Humane Choice and the RSPCA are two options — or plainly organic. Even in these cases, buying whole carcasses is still a benefit, and those animals require very little butchery to get what you want out of them. (Breaking down a chicken can be done with most home knives and learned from the vast amount of videos available online.) Even if you choose to roast the animal whole, you can keep the carcass bones and make a roasted stock from them.

If you're further interested in bones, fat and organs, approaching a local processor can often yield super cheap results, since so many customers of theirs choose not to take them. And the smaller processors often don't have the infrastructure to keep them around, so they just head to rendering companies.

3. Avoid the Middle Meats and Skip the Tenderloin

In America, most of the money made off a carcass is from an area called the middle meats — the span of meat along the spine from somewhere around the fifth rib to the pelvis. Common cuts from here are in the rib, centre-cut and loin chops in pork; the ribeye, porterhouse, T-bone and New York strip steaks in beef; and the rib, rack, loin and saddle chops in sheep.

Instead of these more expensive and less flavourful cuts, look to areas just outside the middle meats for cuts that can potentially offer more flavour. In pork and lamb, look for shoulder chops. In beef, look to chuck, Delmonico or sirloin steaks. They may take a bit longer to cook, at a lower temperature, but the results will be more flavour and less cost.

And, above all else, skip tenderloin. It's the most expensive cut, kilo for kilo, and it's also the least flavourful.

4. Learn How to Braise and Roast

The most flavourful cuts are those that have worked the hardest. (Refer to my earlier point on what develops flavour in living animals.) These cuts are often the ones that require lengthier, slower cooking times. Think: shanks, hocks, brisket, breasts, drumsticks and so on. These cuts break down during the cooking time to provide an unctuous sauce (part of the benefit of collagen's hydrolysation into gelatin) that will enrich any dish, the vegetables that are cooked with it will provide more nutrients and any recipe will offer ways to extend it far beyond that of a quick-cooking single-portion cut (like steaks or chops).

Because they aren't quick-cooking or grilling cuts, or famous middle-meat cuts, the cost of braising and roasting cuts is often much less.

This can be a bit more challenging to find. Older animals tend to be eschewed based on a stigma that they have poor texture and "gamey" flavour, but given the right husbandry and postmortem conditions, older animals can provide a better product than their younger counterparts and at a far more affordable cost. This also goes for dual-purpose animals: livestock that has been raised for reasons other than exclusively meat, for example, dairy, fibre or offspring.

One way to source these animals is to find a reputable wool or dairy operation and inquire about what they do with their cull animals, the ones that they are getting rid of at the end of a season. In these cases you'll probably end up purchasing a whole or half carcass (note tip No. 2 above), which may further reduce the cost.

6. Find a Knowledgeable Butcher, and Trust Them

Most recipes offer a suggested meat to work with, but in many cases it's not the only option. Talk to your butcher about cheaper alternatives that can yield similar, if not better, results. Also, ask your butcher about what cheaper cuts they recommend, and some guidance in how to prepare them according to your level of cooking.

A Butcher's 6 Secrets for Saving Money on Meat [Credit.com]