Virtual-reality is set to explode in the coming months, with Sony, Razer, Oculus/Facebook and HTC all releasing high-end headsets that take VR to a new level. During Nvidia’s GTC technology conference in Silicon Valley, we were given a hands-on demonstration of the HTC Vive in a variety of gaming and work situations. Over the course of an hour, we battled Imperial stormtroopers with a lightsaber, explored the International Space Station with NASA astronauts, scaled the summit of Mount Everest, and designed a bespoke BMW sports car. Early verdict? Virtual reality is legit.

If your only taste of VR has come via Google Cardboard or its plastic brethren, you’d be forgiven for wondering what all the fuss is about. While fun in quick bursts, the low resolution, latency issues and lack of must-have content renders it little more than fad. But that’s Google Cardboard. To get the most out of VR, you need to move beyond makeshift smartphone solutions and invest in dedicated hardware, which is precisely what HTC’s Vive offers.

Developed in conjunction with video game studio Valve, the HTC Vive is a complete VR solution (minus the PC). It comprises a head-mounted display equipped with dual cameras, two wireless handheld controllers suitable for professional applications, and a pair of “Lighthouse” base stations that track your body’s movements around the room.

As befits its $US800 price tag, the HTC Vive doesn’t skimp on specifications: The twin ocular displays have a refresh rate of 90 Hz and a native resolution of 2160×1200 pixels (1080×1200 in each screen). There are over 50 individual sensors packed into the headset and controllers, which range from a MEMS gyroscope for assessing rotation to an accelerometer for measuring your momentum in the room. 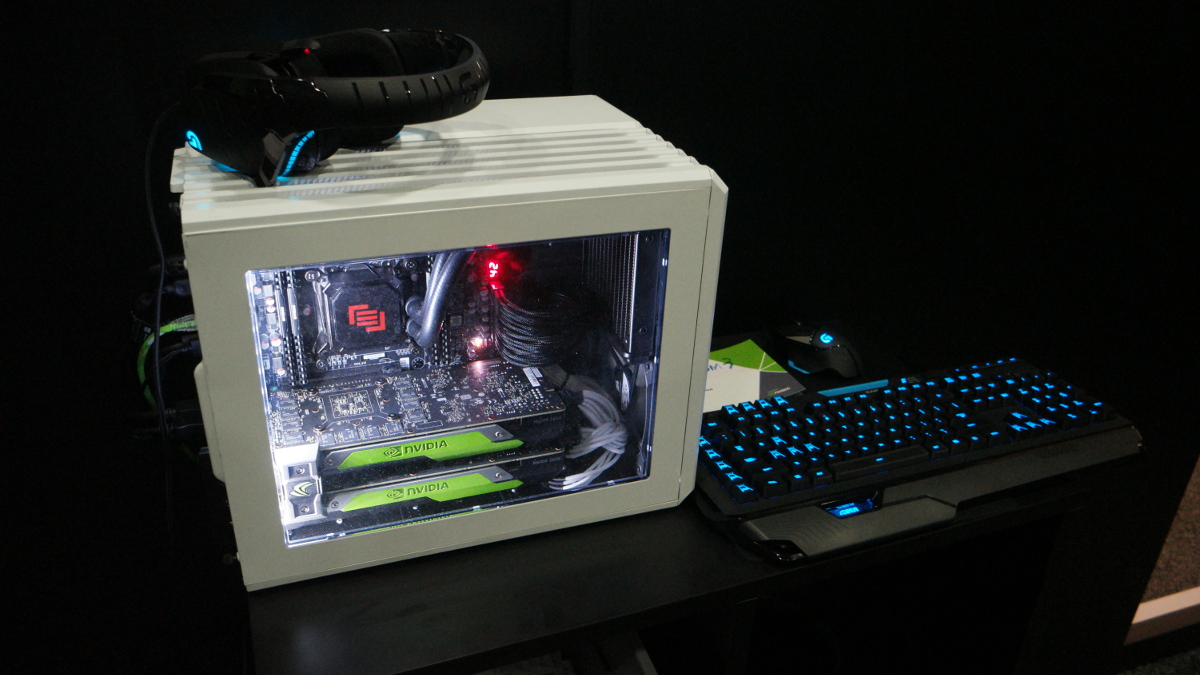 Our HTC Vive was connected to a beast of a PC powered by two Quadro M6000 graphics cards.

The Vive has been designed to allow full mobility within the constrains of your physical room. Cleverly, the system alerts you if you’re nearing a wall or other household object by having it appear in the virtual world as a 3D wireframe overlay. While this obviously breaks immersion — particularly when gaming — it’s a necessary evil to ensure you don’t break your new toy or do yourself an injury while playing. 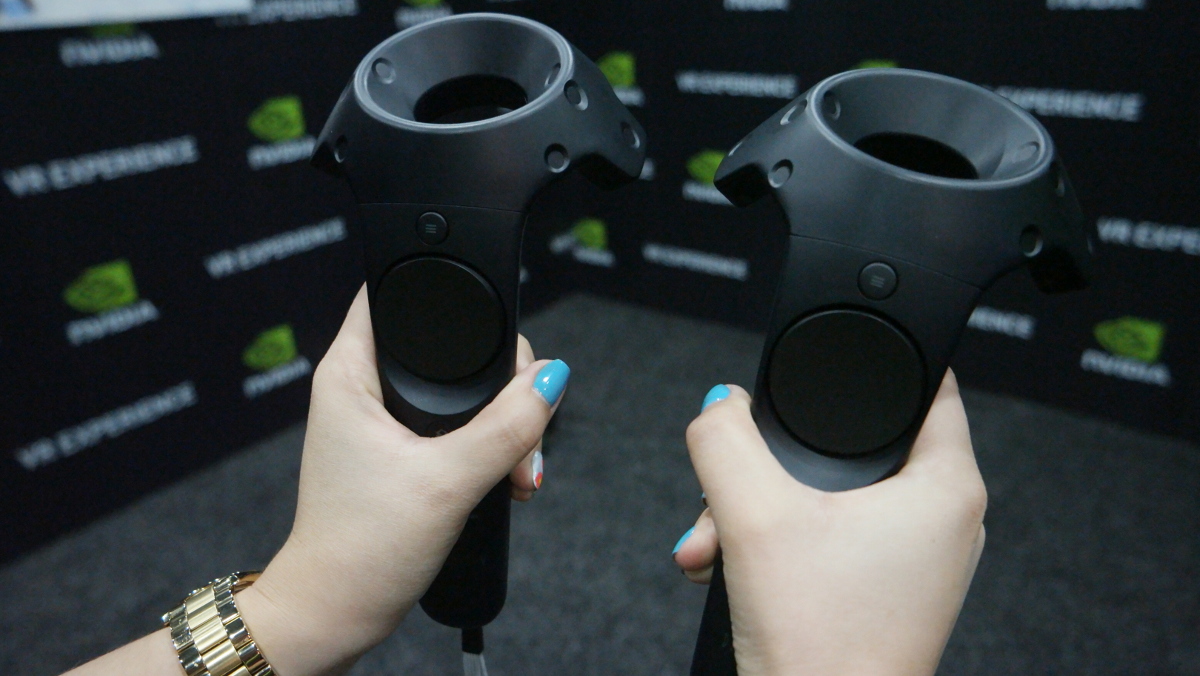 Unlike some VR systems we’ve tested, the HTC Vive faithfully recreates the wireless controllers from inside the virtual world. This is particularly handy when navigating menus and startup screens as it means you can see all the buttons and triggers as they appear in real life. (It also makes it easier to pick the blighters up if you happen to drop them.)

By contrast, many Oculus apps assume you’re intimately familiar with the user interface, which results in a lot of trial and error. You’d be surprised how difficult it is to follow controller instructions by feel alone.

During our playthrough, we found the motion controllers to be superior to the Oculus Rift’s, which are a bit too small for our liking. They handled exceptionally well in VR, with no noticeable latency. On the downside, the plastic maraca shape isn’t as “cool” as some of the other peripherals on the market. 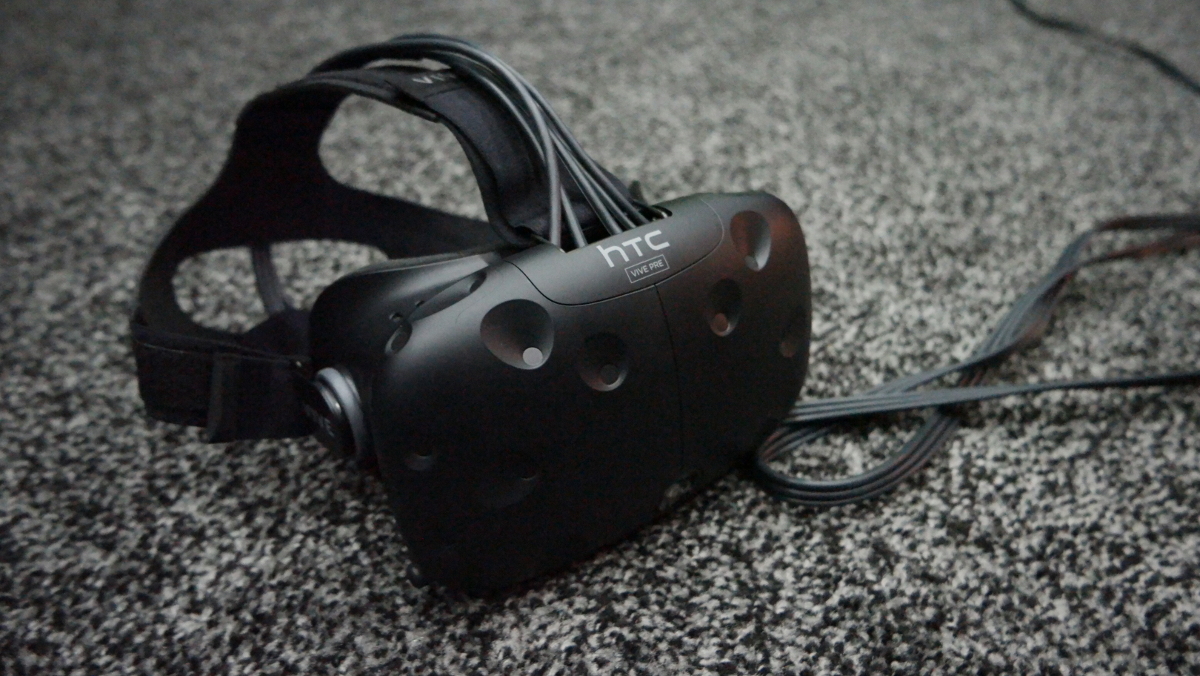 Unfortunately, the so-so build quality extends to the headset. Compared to its chief rivals, it feels a teensy bit cheap — the straps at the back are adjusted by Velcro and it doesn’t feel as comfortable as the Rift.

We also experienced some minor clarity issues, although this may have been due to the way it was calibrated by our beleaguered and exhausted assistant. In any event, the Oculus Rift produced significantly sharper visuals at the same venue. This is something we’ll definitely be exploring in a future article.

We can’t comment on the Vive’s setup process as the system was already up and running. However, it looks like it will be a bit of a bitch to assemble; particularly for smaller lounge rooms. Most people will need to remove their coffee table, lounges and any other furniture every time they want to use the device. If your PC isn’t nearby, you’ll need to lug that into position too.

This is a lot of effort for something that’s best experienced in short bursts. With that said, I personally think that the spectacle and grandeur of VR makes it all worthwhile. 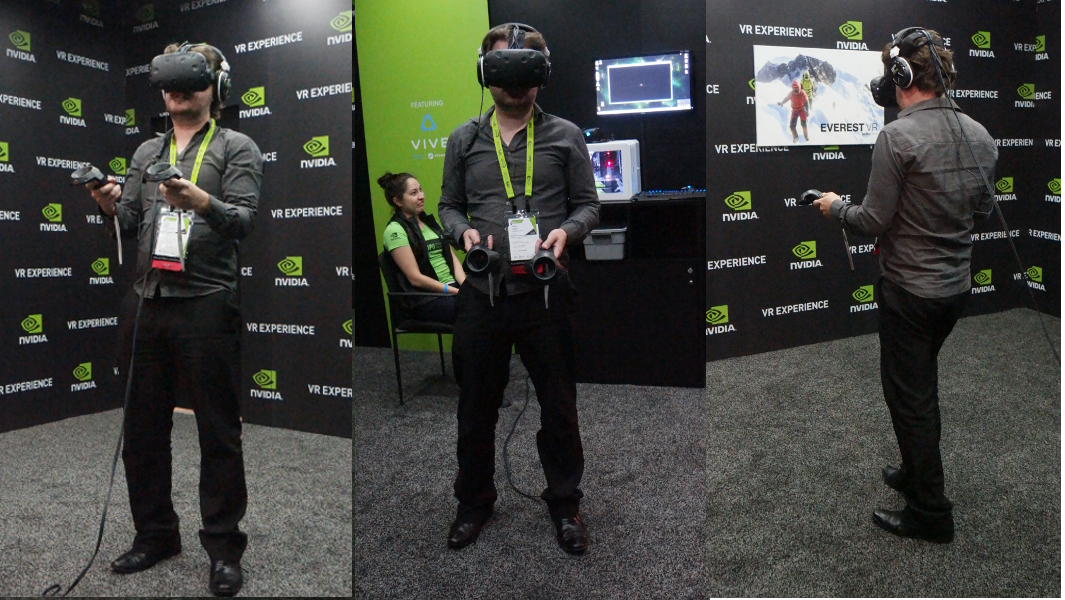 During our hands-on session, we tested Star Wars: Trials on Tatooine, an ISS training simulator developed by NASA, the self-explanatory Everest VR, and a host of virtual business applications including photo-realistic environments rendered in Nvidia Iray VR. Let’s take a look at each in turn. Star Wars: Trials on Tatooine is unquestionably the brightest feather in the HTC Vive’s cap — it’s an interactive short produced by Lucasfilm that puts you in the shoes of a Padawan (Jedi in training). Over the course of the 10-minute demo, you get to see the Millennium Falcon up close, interact with R2-D2, and take out a squad of stormtroopers by deflecting their blasters with your lightsaber. Throughout the battle, Han Solo can be heard barking orders at you via Comlink. (The voice-over artist does a pretty spot-on impression of a young Harrison Ford.)

Star Wars: Trials on Tatooine is an excellent showcase of virtual reality’s strengths — as well as its weaknesses. Stepping onto the titular desert planet is incredibly immersive. From the way the Millennium Falcon lands directly above your head to the “magic hour” placement of the sun, everything is note perfect. It really does feel like being inside the Star Wars universe and will doubtlessly reduce die-hard fans to tears. 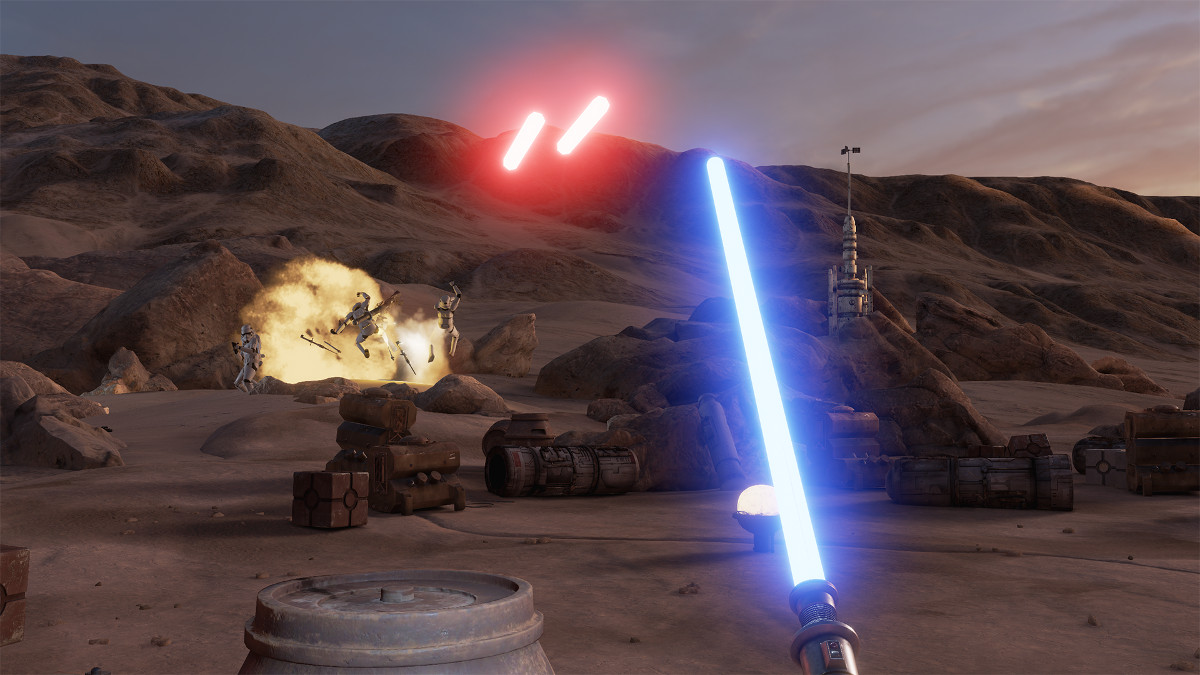 However, once the action starts, your avatar’s limited movement becomes painfully obvious. In a normal FPS game, you would gleefully charge the advancing stormtroopers and make mincemeat of them with your lightsaber. Instead, you’re forced to stand there batting at incoming lasers like some cheap Star Wars-themed carnival game.

Star Wars: Trials on Tatooine was definitely a fun experience, but it was probably the weakest title of the bunch. Take away the iconic visuals and all that’s left is a bland stationary shooter. With that said, you get to be in frickin’ Star Wars! 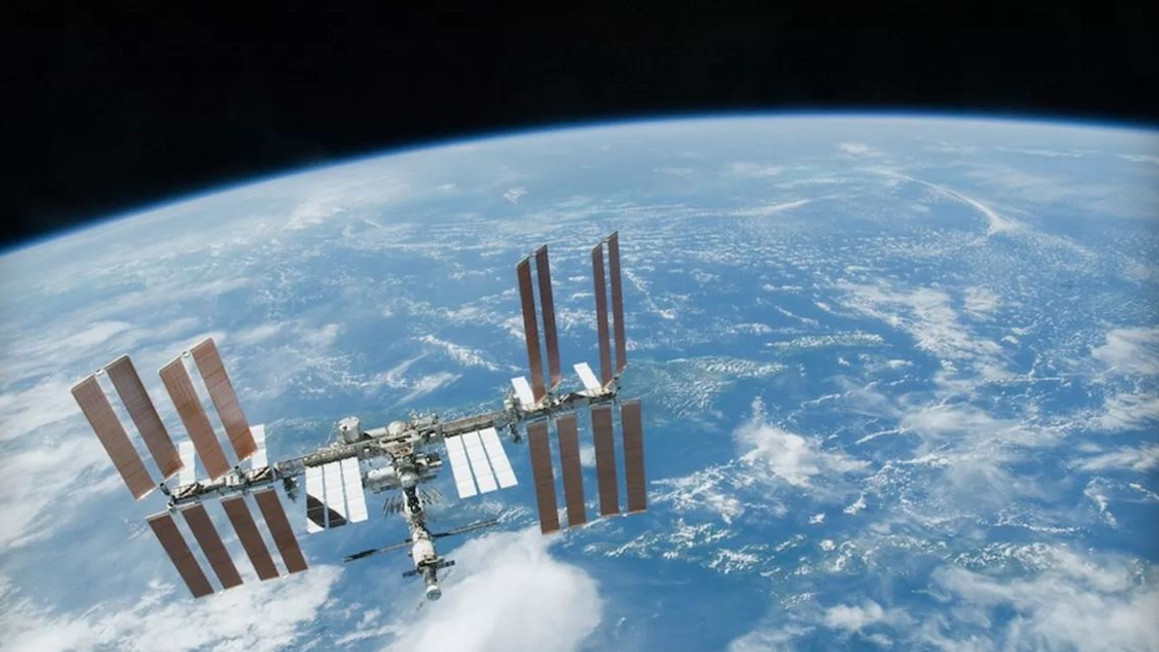 Now this is more like it. International Space Station Experience (ISSE) is a VR demo developed by NASA in the Johnson Space Center’s Hybrid Reality and Advanced Operational Concepts lab. It sits somewhere between an enthusiast simulator and an astronaut training program.

When the demo opens, you find yourself on board the ISS staring directly into the face of NASA’s Robonaut 2; a robotic astronaut that has been assisting humans with basic tasks since 2011. It’s immediately obvious that you’re in zero gravity, with various tools and packages floating about the dimly lit corridor.

Using the Vive controllers, it’s possible to grab these objects and use them to perform a variety of tasks. You can also cycle through an inventory of tools, such as a power drill which we used to insert bolts into a wall.

Unlike Star Wars: Trials on Tatooine, ISSE allows you to move around the International Space Station freely — you can even step outside it. It achieves this via a clever teleportation system that sees the player pointing the controller in the direction they want to go next. You then instantly beam to that location. This might not be very realistic, but it’s the only way to traverse large areas from the confines of your physical lounge room. This style of “movement” is something we’re going to see a lot more of in VR.

Interestingly, we didn’t experience a disconnect while messing about in zero gravity despite being firmly planted on the ground. This may have been down to the choice of visuals — while the environments are incredibly detailed, they still retain a “video game” style. This was particularly noticeable with the human crew mates who can be found exercising in the ISS training room. They look like Sims characters come to life. 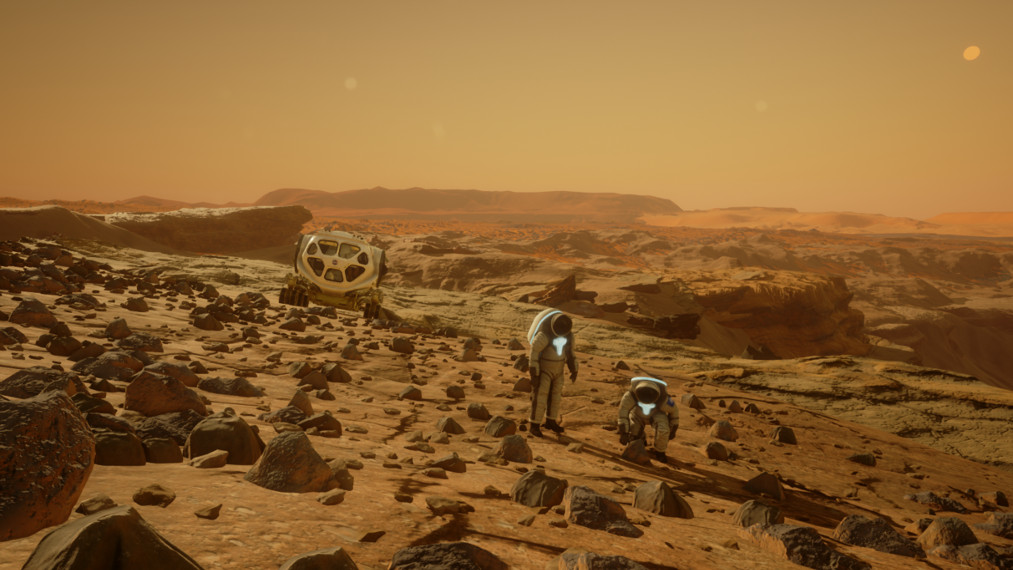 ISSE is a great example of what’s possible in VR: It combines awe-inspiring visuals, a fully traversable environment, and actual learning into a single package. Now we’re itching to try out the similarly themed Mars 2030 (pictured above.) 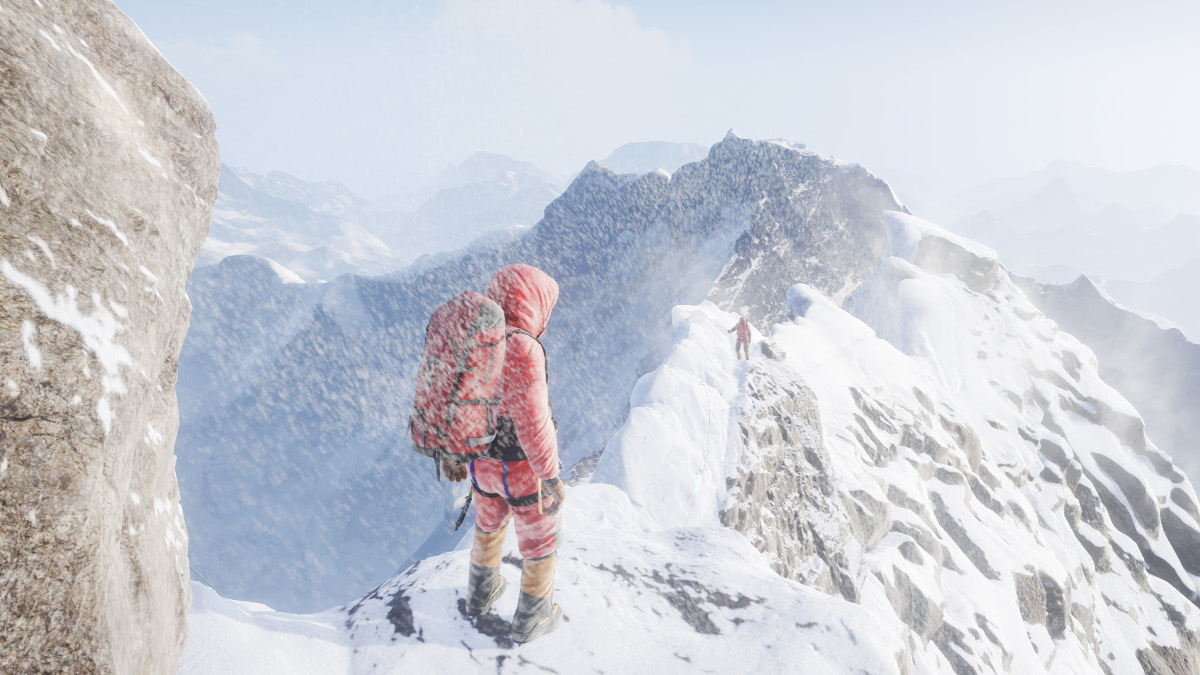 Climbing the world’s tallest mountain is something most of us will never get to experience. Everest VR attempts to provide the next best thing. The game is a faithful recreation of what it’s like to mount an expedition, but without the real-life frostbite, oxygen deprivation or death from exhaustion. 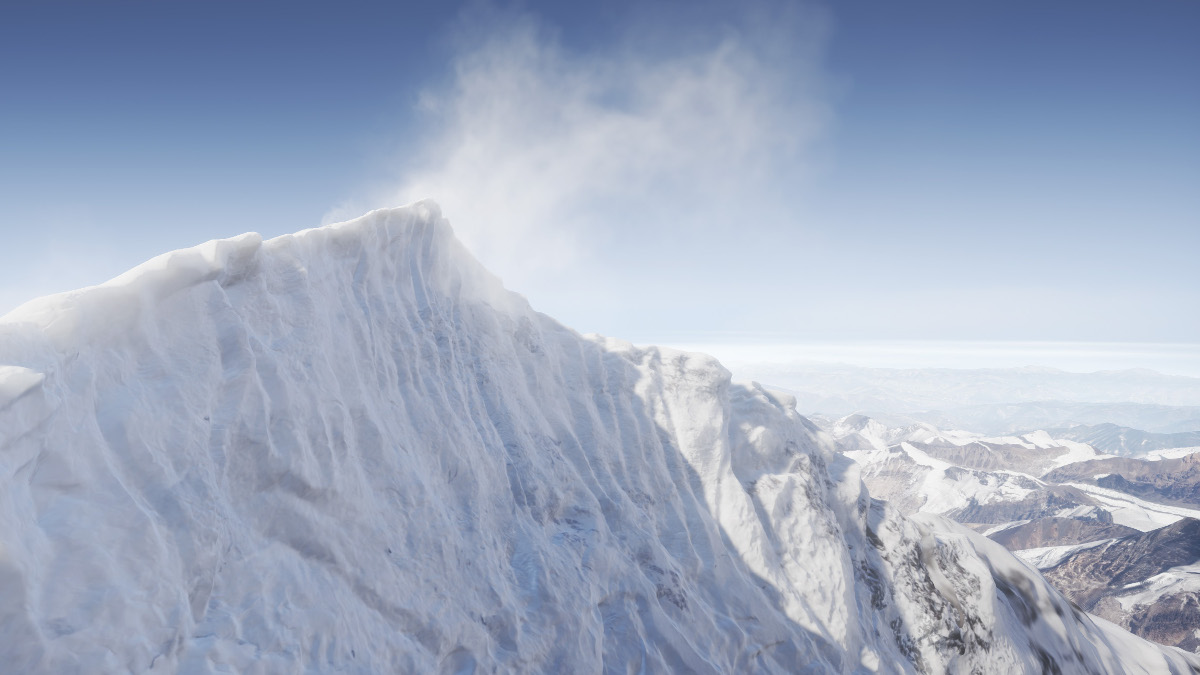 Everest VR provides one of the better examples of moving in VR — you’re forced to slowly inch your way along a narrow mountain path with the sheer, terrifying drops restricting your movement. In other words, the virtual environment is perfectly suited to the footprint of an average-size room.

During the brief demo, we were treated to some spectacular Everest views complete with realistic weather conditions. We also got to ascend a sheer cliff face with grappling ropes. (The first time we tried this crashed the program, but we’re going to put this down to the early build.)

Everest VR looks to be an unmissable VR experience. However, we suspect the “replayability” factor will be quite low; something that many virtual-reality games are bound to suffer from.

While VR video games have been grabbing most of the headlines, the business sector has been taking notice too. At GTC 2016, we got to try out a range of VR applications and workstations, including Iray VR; a virtual-reality offshoot of Nvidia’s next-gen physically-based renderer (PBR) for design professionals.

The possibilities offered by these kind of platforms are pretty profound. Armed with a VR headet, designers and their clients can experience products and environments in photorealistic detail from any angle; all before they are physically built. Crucially, the 3D-rendered models recreate light, shadow and reflection in real time as the viewer moves around them.

We were shown examples of a concept building in Barcelona and a BMW car-designing app that was essentially Design Garage in VR. In the latter demo, we seamlessly used the Vive’s wireless controllers to change our car’s paint job, wheel decals and upholstery. We were also able to test how the finished result interacted with light by changing the time of day and geographical location. (Naturally, it was also possible to sit inside the car.) 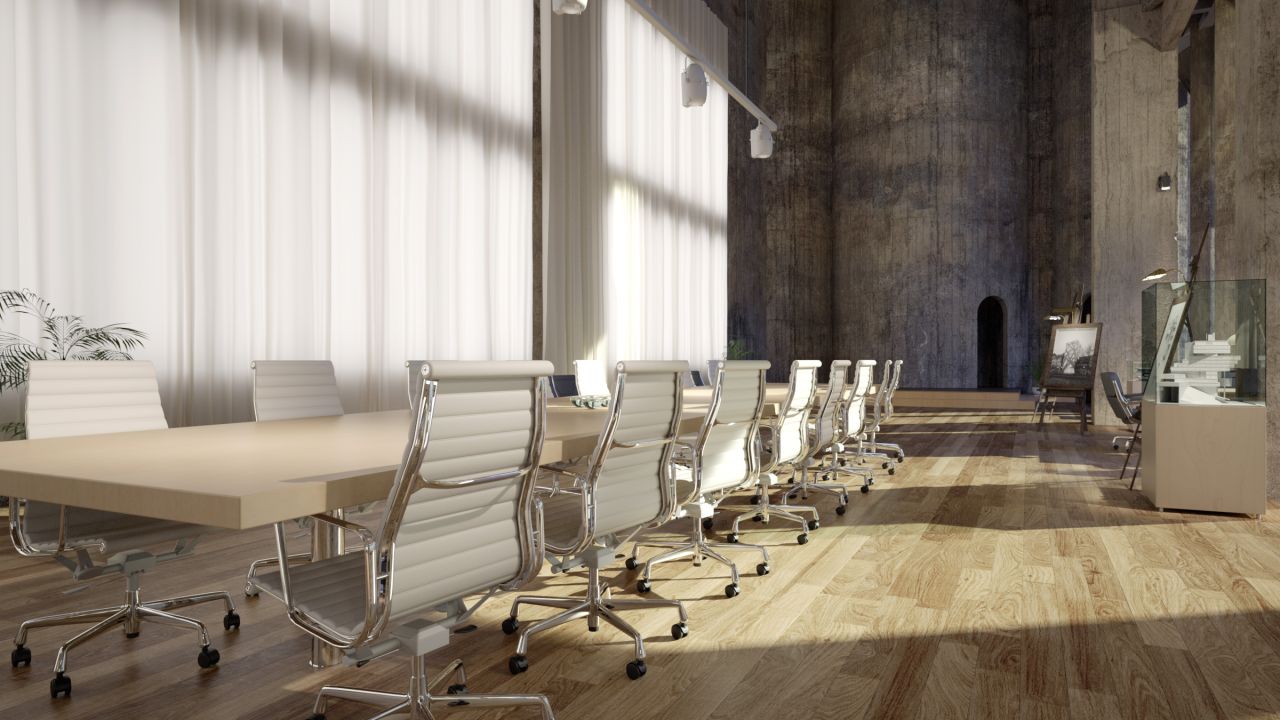 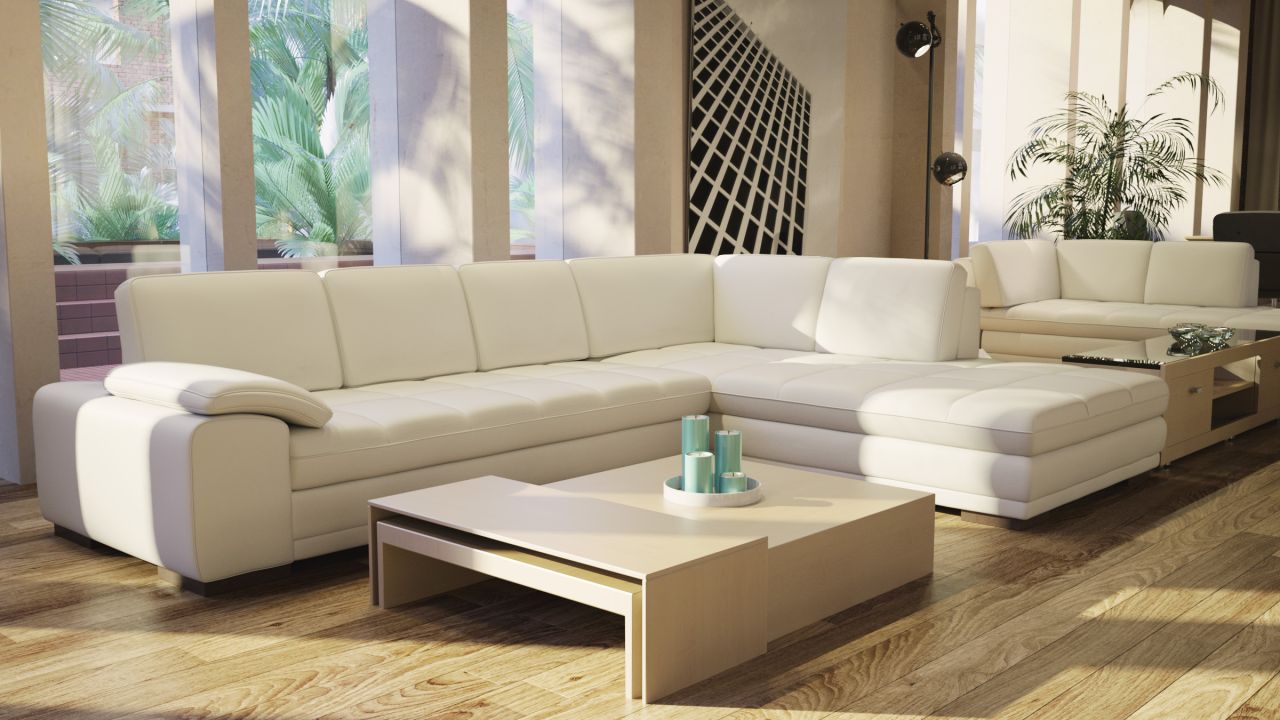 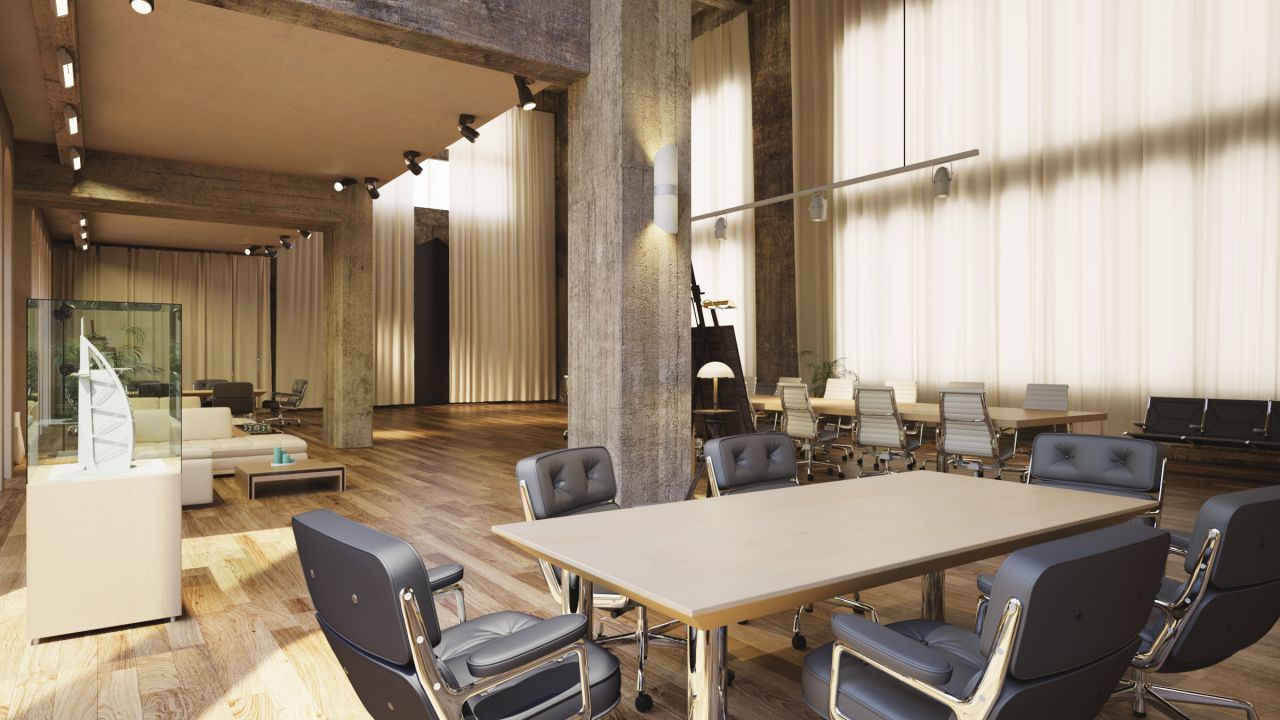 We also checked out an interactive virtual diorama of NVIDIA’s under-construction headquarters rendered with Point Cloud. Using the controllers, we were able to move the floating model in any direction, zoom in and fast-forward/rewind the construction process.

Our first thought while using this application was that tabletop wargaming fans are going to love VR. Our second thought was that virtual reality apps really need to fine-tune their UIs — moving the model around with the controllers was an unwieldy experience: It kind of made me feel like a pirate with two hooks for hands. Observe:

It’s early days yet and content is sure to be scarce in the months ahead. Nevertheless, there’s a lot to be excited about with the HTC Vive. It easily holds its own against the other virtual reality headsets that are about to hit the market. If you can stomach the astronomical RRP and have a compatible PC it might just be worth becoming an early adopter. Exciting times are ahead.