Why Brand Loyalty Is For Suckers

Every year, when a new tech product is announced, the world divides into two kinds of people: people who line up to buy the New Shiny Thing, and people who rant about how New Shiny Thing sucks. Both of those groups of people are chumps. Loyalty to a brand — whether it’s love or hatred — is a poison that makes you stupid. 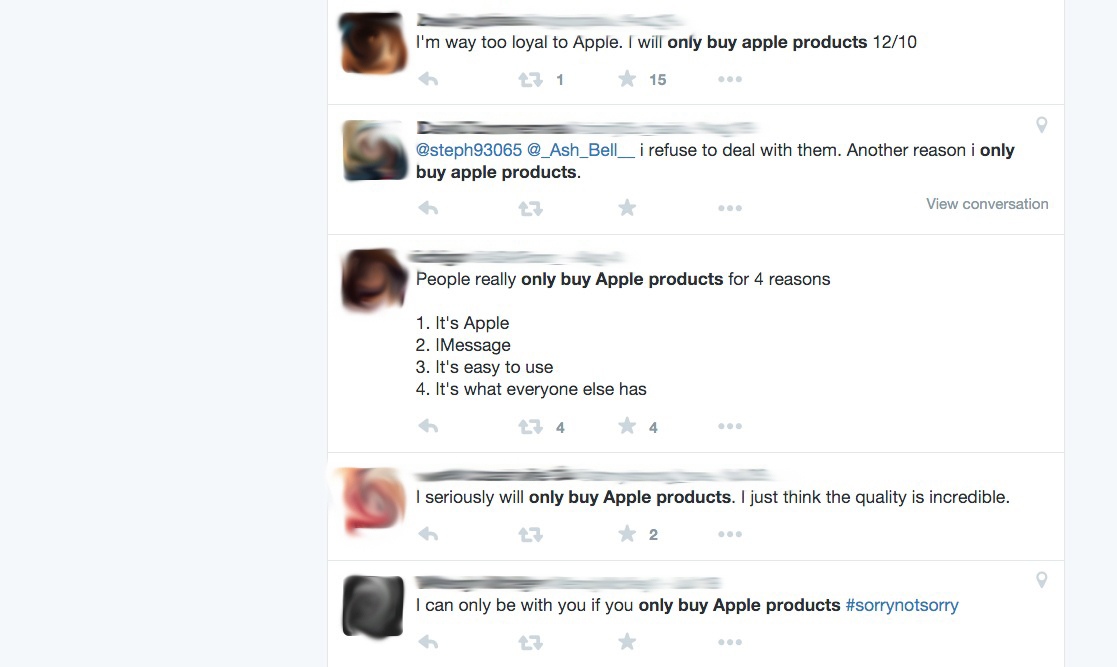 Planting your banner on the side of a “brand,” or even a specific product in general, is a set of self-imposed shackles. It’s a “monopoly by choice,” where you trust a company to deliver everything you need, when you need it, and to never violate your privacy, never overcharge you for services, or treat you right as a customer.

You’ve probably experienced this, too. We all have that friend who “only buys Apple products” because they’re “just better designed” or “more reliable”. But this stuff is really a mask for “this stuff works together and I don’t have to think about it.” Once you’re in that mindset, it’s difficult to leave. And once they have locked you in, Apple will introduce a new laptop has no USB ports and say “You don’t need USB, try this port instead! If you really need it, we can sell you an adaptor. For $79.”

When you trust any one company to meet all of your needs, you shut off the ability to make smart decisions about what you use, when you use it, and why. Instead, that loyalty forces you to contort your needs into whatever shape that company gives you. They tell you what to buy, instead of the other way around.

The whole point of a “brand,” from a marketing perspective, is to encourage people to develop an emotional attachment to a product. Companies don’t just want you to stand up and defend them, they depend on it. They do whatever they can to make you feel like your identity is somehow linked to the products you buy, the drinks you consume, the computer you use, and even the toilet paper you wipe your arse with. They need you to feel that attachment because it, above all else, is what keeps you coming back.

Remember back in 2012, when the Wii U launched? It was generally panned by reviewers at the time who lamented its lack of games and other issues after it launched. You’d figure people would hang tight and wait. Nope. That didn’t stop people from lining up in the winter cold to get one of stores’ limited supply, or from building Wii U trackers, scouring the web for leads, sleeping in parking lots, and driving for hours to get one.

It’s a perfect example of brand dictating the buy. People waited in the cold because it’s Nintendo. They trusted the company, and the promise of the brand. They felt like they were part of something big, despite the facts. And sure, the Wii U eventually earned its stripes, but it took two years, a lot of games, and some price drops to get there. Buying now would be considered a smart purchase. Buying then made you an “early adopter,” or a polite way of saying “unpaid beta tester.”

There’s a reason we get sucked into this. The psychology of brand loyalty has roots in social identity theory: the notion that our idea of self is associated with our social group. We “identify” with people who buy the same things we do. On top of that, you have the Diderot effect, which happens when our purchases directly influence our sense of self. We try a new product, are happy with it, and suddenly we feel a kinship towards people who have the same thing because they “get” us. If you’ve ever waded into a flame war between PlayStation and Xbox faithful, you know what I mean. Their choice in console, or smartphone, or PC graphics card just “says something” about who you are in a way those “other guys” don’t get.

Of course, this makes us want to do one thing: buy more of that company’s stuff, and support them because “you know they make good things.” Well, sure they do — but so do a lot of companies, and we forget that almost instantly. We become subject to choice-supportive bias, and we rationalise our decisions as the right ones in every context, for all people, and all identities. Because it was right for us, we assume, it must be right, period.

There’s no shortage of research that points to the notion that purchasing and self-identity are linked. To some extent, that’s fine — it’s good to be happy with the things you buy, and happy with the role they fill in your life. But when a brand goes past “I’m happy I bought this, it meets my needs,” to “This product/company makes me feel good about who I am,” or — worse — to “Anyone who chooses a different product doesn’t understand/is stupid,” you’ve fallen right into their trap. You’re being used as a weapon in a fight where you don’t actually have a stake: to drive sales for that company and diminish the users of their competitors. 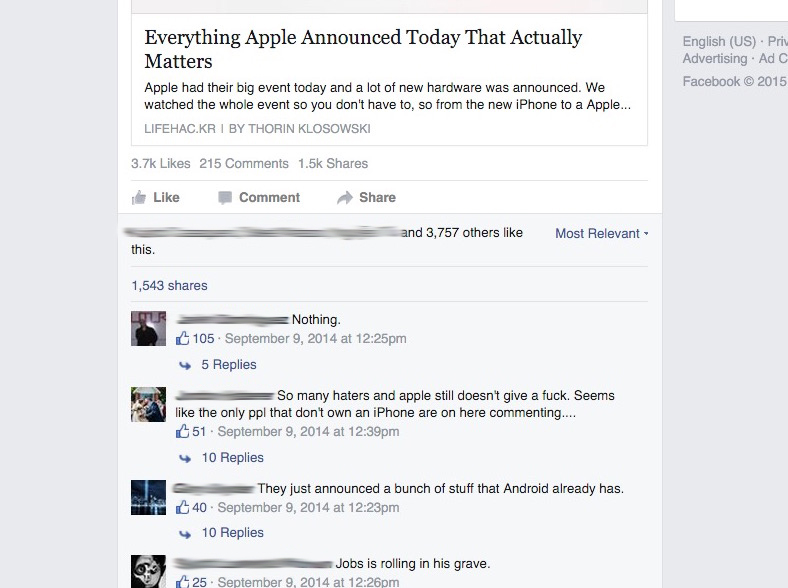 This psychology isn’t just about making you love a company you patronize. It’s also about making sure you hate the competition, or any alternatives in the same field. But this is bad for everyone, including you: when you hold a company accountable for their missteps (and praise what other companies do well), everyone makes better products. But those companies don’t like competition.

Blind loyalty (and blind hatred) discourages us from demanding better products from the companies we patronize. If all they hear is how perfect they are, and how terrible their competition is, they have no reason to innovate or improve. If their customers aren’t capable of being sceptical, why should they? Competition matters, and it drives everyone forward. Where would the iPhone be if Android hadn’t pushed them forward on multitasking, or the notification center? And where would Android be if iOS hadn’t shown up and changed the smartphone game in the first place?

This “us versus them” mindset has another sinister effect: It sends the message that those other companies (and, by proxy, their patrons) don’t “get it.” It encourages you to listen for talking points and rationalisations why their products are inferior and why the people who choose them are uninformed (or worse, ignorant and stupid.) It drives you to dig in your heels to defend a company or product that, let’s be real, needs no defence and should be able to stand on its own merits.

Brand Loyalty Uses You as a Weapon and Encourages Blind Consumption

You know Lay’s “Do Us a Flavour” campaign? Where they release four new flavours of potato chips and then tell you that somehow, for some reason, they need your help to narrow it down to one (as if they haven’t already shown they could launch all four and be fine?) To vote, you essentially have to fork over your Twitter or Instagram info, or opt-in to them hitting you with text messages about their products. Doing so lets you join their “flavour ambassadors,” which is code for “unpaid food soldier in our marketing department.” Don’t believe us? Check out the comments on their Facebook page. People are willing to fight and spend hours of their lives fighting — over chip flavours.

Don’t get us wrong: enthusiasm can be good, and researching the best product for you is also good. But when enthusiasm turns to standing in line for 8 hours, or haranguing people with different preferences, you’re just a foot soldier in a marketing war. And you’re not even getting paid for your service.

Every company’s PR and marketing strategy relies on this to some extent. Whether they call you “brand ambassadors,” a “street team,” or “raging fans,” they rely on you to go out and do their marketing for them. This is the most outwardly destructive element of brand loyalty: It’s one thing to lose your own identity to the consumer choices you make, but to take up the Gospel of Netflix and swear to crush the Presto Infidels makes you the villain, and makes that divisiveness spread like a kind of consumerist cancer. No one wins here, except the company you’re defending for no good reason.

And that’s really it — when you enlist in some company’s brand army, take to comment sections and forums, to fight for them, turn making your product choices known into a full time job, and make sure everyone who thinks differently than you do feel diminished after they interact with you, that makes you the sucker. You can do better. We all can.