Thinking of picking up a new HD TV? Here are all the pricing, release dates, specs and features for each big brand’s 2015 TV lineup; from Samsung’s curvy Ultra HD wonders to Sony’s Android TV.

If you’ve been putting off upgrading your TV for the past few years, now is an excellent time to take the plunge. While Plasma TV is now officially dead (sob), the new and revitalised LED LCD TV lineup has a big focus on excellent picture quality — including deep black levels and plasma-esque contrast — and simple, elegant design.

The panels of 2015 are bigger, brighter and cheaper compared to the prior generation and they also come with all-new components and features, ranging from inbuilt Android TV to superior processors.

Each company’s line-up comes in anything from the smallest 32-inch screen sizes up to massive 88-inch monsters. Let’s take a look at what’s different.

WebOS 2.0: Faster, Cleaner, More Customisable: WebOS is a great Smart TV interface, and it’s become slightly better in its most modern iteration. WebOS 2.0 starts up faster, but doesn’t change too significantly from the original apart from in the way that it lets you tag channels or inputs as favourites to more easily access them.

The Input Picker in the top right corner, for example, is a quick go-to that lets you change sources without the complicated multi-click approach of the old NetCast and first WebOS TVs.

ColourPrime: Wider Colour Gamuts: LG’s ColourPrime tech is the equivalent of Samsung’s SUHD or Sony’s TRILUMINOS — it’s a different phosphor coating for the LEDs that provide the backlight behind the LCD panel, giving a significantly wider colour gamut compared to a traditional LED.

The result is a tech that genuinely does result in better colours that are more vibrant and brighter — I’ve seen it compared and the difference is substantial. It’s only on LG’s PRIME 4K TV, though, the UF950T.

Netflix: 4K Out Of The Box: Almost all of LG’s 2015 TVs — from the $899 LF6300 onwards and upwards — support Netflix, straight out of the box. Any WebOS or WebOS 2.0 telly will be able to access the video streaming service du jour via either Wi-Fi or wired networking, and it’ll be a Smart TV app rather than any kind of hacky workaround. Because of that, you can expect native 4K video streaming delivered to your TV, as long as you’re trying on an Ultra HD TV and as long as your ‘net is fast enough.

SUHD: SUHD is a new screen technology that Samsung is pushing in its premium TVs, based on the quantum dots previously used by Sony and other panel-makers that offers a significantly wider colour gamut. What this means is a TV that can offer brighter outright colours, more detailed and gradated colours over a wider range, and a more realistic image that’s closer to the one you’re meant to be seeing. It’s still not as high-contrast or as deep-blacked as OLED, but it’s easier to manufacture and available over a range of screen sizes.

Tizen, An Entirely New Smart TV System: All Samsung Smart TVs released this year — and that’s almost all of them — run on a new Tizen operating system, and the top models use a Samsung-built Exynos octa-core processor. The whole thing is a lot smoother and simultaneously a lot cleaner and simpler than previous attempts, and it all just works like you’d expect. 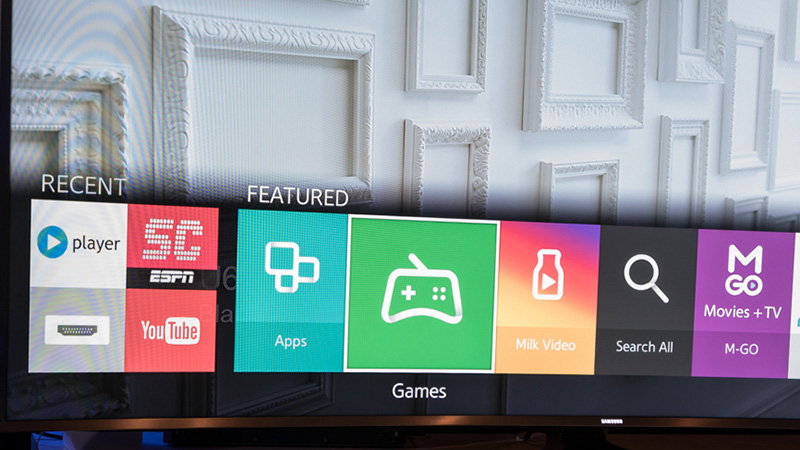 Samsung’s Smart Hub now lives as a bar at the bottom of the screen, a la LG WebOS 2.0, but Samsung has the big step up over its competitor of having a bunch of local video streaming services available out of the box like Stan, Foxtel Play, Presto, as well as Netflix.

Free Netflix For Six Months For UHD Buyers: If you buy a Samsung UHD or SUHD TV between now and June, you’ll get a free six-month subscription to Netflix. That’s not a huge monetary incentive — $90 value on a $5000-plus TV — but it gives you direct unfettered access to a bunch of 4K video to properly show off your new screen’s resolution and detail.

There are caveats, obviously; you’ll need an internet connection capable of 25Mbps downloads, a decent quota for regular streaming, and Netflix’s 4K video still doesn’t compare to a less-compressed higher quality 4K file, but all things told it’s a smart move and a good extra.

Android TV: The majority of Sony’s 2015 range of BRAVIA televisions are running the Android TV smart TV operating system, and that means deep integration with a bunch of first-party Google services (like Google Play Music) as well as third-party apps (like Spotify) through a customised, TV-optimised version of the Play Store. There’s a small range of apps on offer since the service is still quite new, obviously, but the list is growing quickly. Crucially, too, it’s a lot more open than LG’s WebOS and Samsung’s Tizen-based Smart TV, so developers are more likely to take notice. Apps like Netflix, Spotify, TuneIn are already available on Android TV, and video-streaming and playback services for your downloaded media like VLC for Android and Plex for Android are also available. The entire interface, too, will be instantly familiar to anyone who’s used an Android smartphone or tablet, especially if it’s a basic no-frills Nexus — Android TV is all about simple block colours and flat Material Design. Android TV is pretty lightweight and Sony’s new BRAVIA TVs are pretty powerful, so you’ll only have to wait a couple of seconds for apps to load — no worse than competitors.

4K X-Reality Pro And X1: Delivering clean, clear native 4K video content and upscaling 1080p or lower-resolution video is crucial for high quality TVs, and Sony has had the most experience in that — it was the first to announce a 4K TV in Australia. After successive generations of video processors Sony has its most powerful 4K chip yet, and more than just optimising natively 4K video it does an extremely good job of 1080p and 720p video as well. This is utterly important given that, even for the next couple of years, even the very best 4K TV will mostly be restricted to showing 1080p video from Blu-rays, and most Australian internet connections are far more at home streaming 1080p or 720p than the much more demanding 4K. To that end, everything but a few Sony 4K TVs have the X1 chip, and can stream 4K video natively from Netflix or YouTube or any other compatible service if it appears with an appropriately designed Android TV app. I didn’t get a chance to test the quality on much other than a couple of Blu-ray movies like Interstellar and Skyfall, but for this kind of lower resolution but still high quality video, Sony’s newest upscaling chip does one of the best jobs that I’ve seen of any 2015 television so far. Lesser screens still have the very capable X-Reality pro chip that we’ve seen on last year’s models.

Hi-Res Audio: Sony has been pushing Hi-Res Audio for some time, and in 2015 this extends to the audio processing and high quality speakers in the company’s top TVs. The top of the line X9400C, for example, has support for hi-res audio files whether they’re streamed over the internet, your home network or played back directly from a USB-connected flash drive or portable hard drive, and the TV’s speaker system is the equal of any standalone mini hi-fi system with 90 Watts of power and the same magnetic fluid speakers that it’s had on flagship TVs for a couple of years now. Basically, it goes like this: if you know what hi-res audio is, and you know the advantages that it has over regular audio, you should factor it into your consideration when you’re thinking of picking a TV out of Sony’s line-up. Hi-res audio eliminates all of the problems usually associated with low-quality streamed or downloaded audio files, like artifacting from audio compression and the loss of detail in especially high and low frequencies. You’ll find it on the absolute top of the line Sony at the moment, but it’ll filter down next year.

Firefox OS Panasonic’s 2015 TVs are powered by the ‘Beyond Smart’ Firefox interface. This UI purports to be sleeker, faster and with oodles of customisation. Noteworthy features include an inbuilt Voice Assistant, “Info Frame” for quick selections and three dedicated decks: Live TV, Apps and Devices.

Netflix button If you’re into Netflix, Panasonic goes one step further than the competition: with the exception of the entry-level C400 series, all 2015 models have a dedicated Netflix button on the remote.

TV Anytime This is essentially an inbuilt streaming service that allows you to watch live TV on your tablet or smartphone via your TV’s tuner, no matter where you are in the world.

Brightest panels yet: Panasonic’s 2015 range uses new “super-transmissive” LCD cells that purportedly achieve much greater brightness without a significant increase in power requirements. According to Panasonic, this translates to screens that are up to 35 per cent brighter than last year’s models.

Here’s a rough guide to 2015’s TV line-up from Sony, Samsung and LG. A few of the screens featured below are carried over from last year’s line-up, but for the most part they’re brand new and up to date with the latest tech. Generally as you pay more you’ll get a larger screen with more features, although don’t be surprised if a smaller screen with a more diverse and fancier feature-set costs you a little more than a larger, dumber panel. 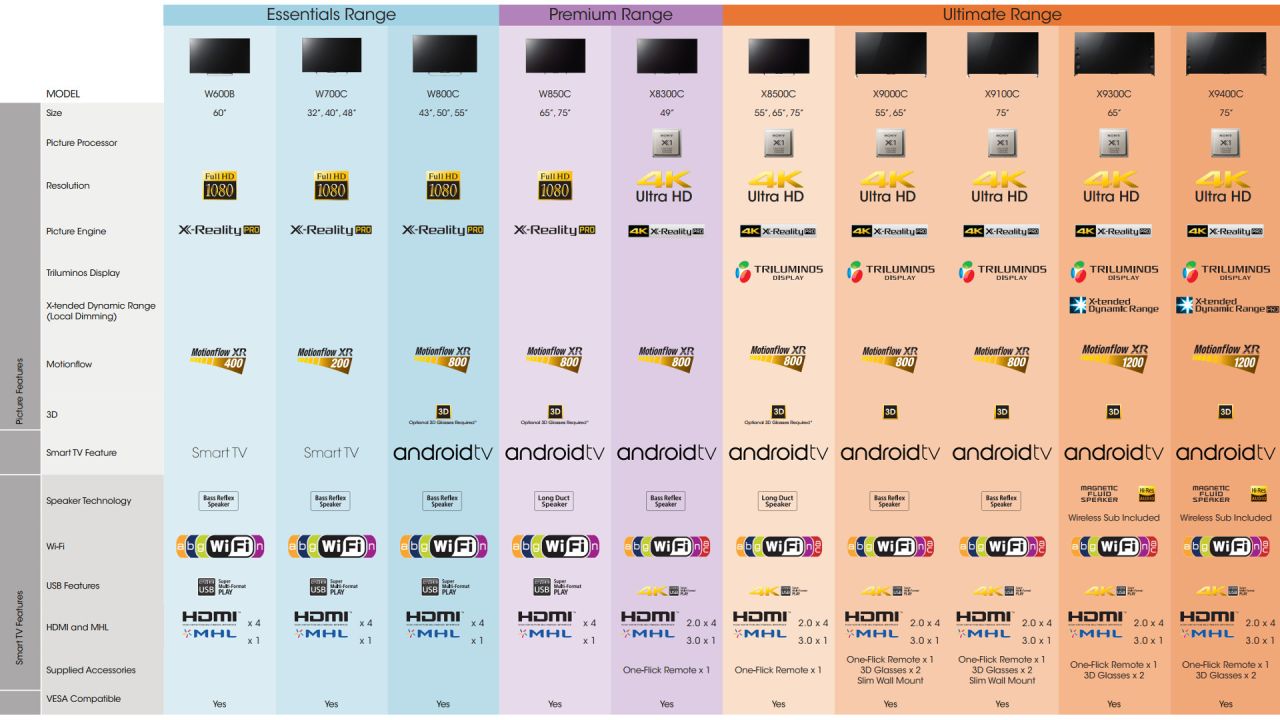 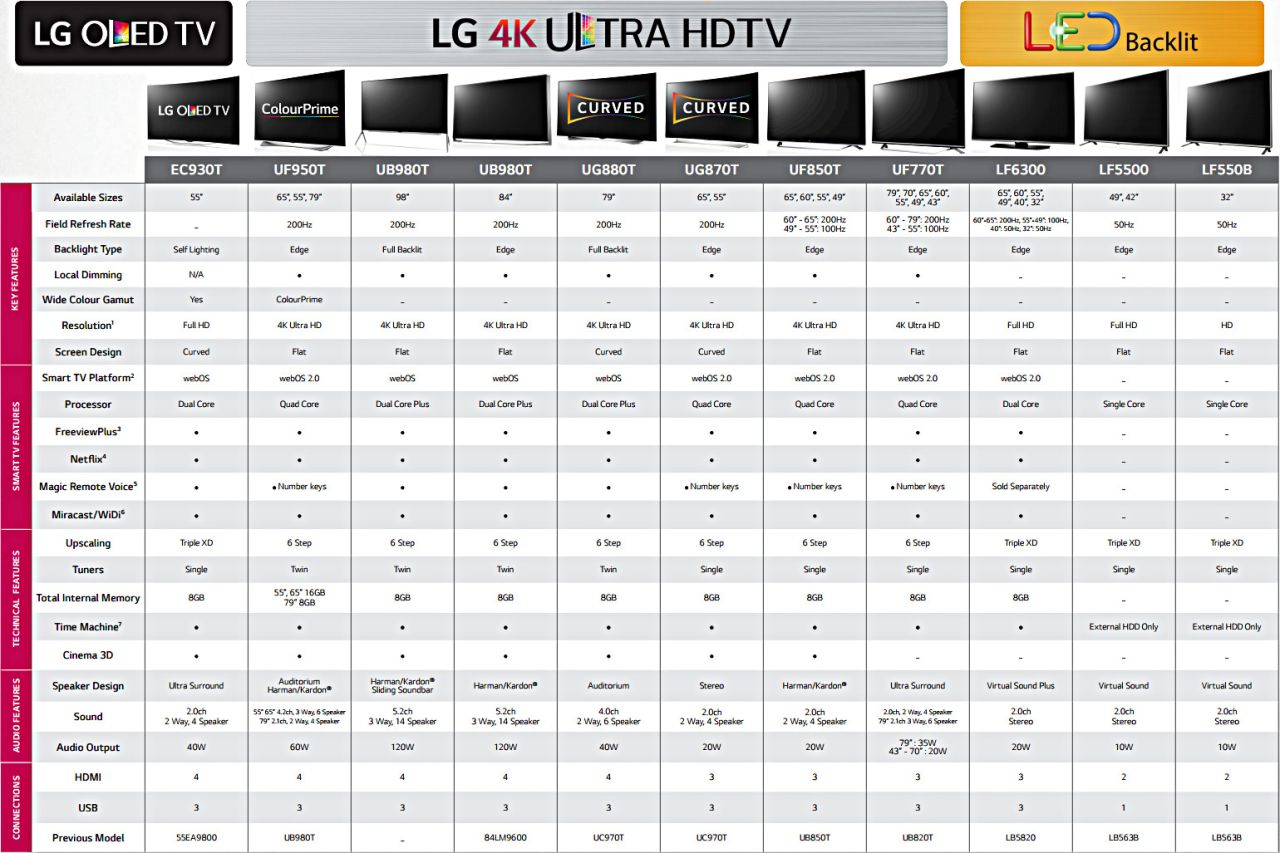 KD75X9400CAt the absolute top of the 2015 Sony LED TV lineup, you’ll find yourself with the $11999, 75-inch KD75X9400C incorporating Android TV, Hi-Res Audio, the best of the best 4K Triluminos, and every bell and whistle you could think of. The differentiation between the two series with identical feature-sets is that the X9400C has those excellent front-facing Magnetic Fluid speakers.

JS9500: The Samsung Series 9 JS9500 is an 88-inch monster that will set you back $24,999. It boasts Nano Crystal technology that purports to provide more colours, contrast and brightness than any previous Samsung TV model. It’s main claim to fame is its curved Ultra HD panel which is designed to boost the immersion of the viewing experience. Just bear in mind that you need to be front-and-centre to the most of this panel.

JU7000: This is a standard 4K flatscreen that retails for a more modest $3,199. Noteworthy features include inbuilt UHD Upscaling, Samsung Easy Sharing support for Android devices, a Quad Core processor and Voice Control.

UF950T The UF950T is at the top of LG’s Ultra HD and LED LCD range, and although it’s edge backlighting it comes with LG’s ColourPrime wide colour gamut tech. The UF950T is a flat, edge-lit, local dimming ColourPrime 3D Ultra HD LED LCD running WebOS 2.0 through a quad-core CPU. It has built-in Wi-Fi, Wi-Di and Miracast, a twin FreeviewPlus TV tuner, and can access Netflix. You’ll pay $12,999 for the 79-inch version.

We’ve focused our coverage on the four big mainstream TV brands currently operating in Australia. If anyone wants to pitch in and offer their opinion on another manufacturer — be it cut-priced or enthusiast — let us know all about it in the comments!

A version of this story also appeared on Gizmodo Australia.