Why You Should Run — Not Walk — In The Rain 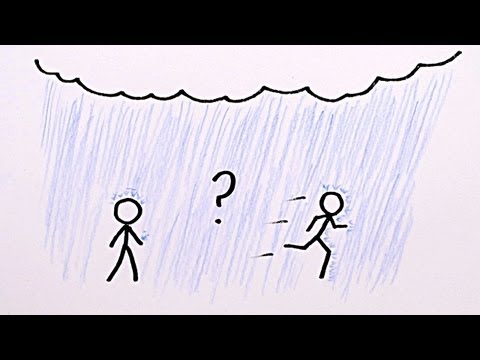 Do you stay more dry walking or running in the rain? MinutePhysics explains on YouTube the science behind why running is the best strategy if you don’t like getting wet.

This probably isn’t a mind-blowing revelation — the less time you spend in the rain, the better — but some people argue that when you’re walking, less of your body is exposed to the raindrops. We’ve suggested you run in the rain previously, and the two-minute video above should put this debate to rest. The video is also a treat if you dig science and want a quick explanation. Specifically, there’s a formula: Total wetness = (wetness per second X time spent in rain) + (wetness per meter X meters travelled).

(Note: Mythbusters initially tested this run vs walking question and said that walking is better, but when they revisited the topic and tested more carefully, they confirmed that in actual rain, running keeps you more dry.)

Is it Better to Walk or Run in the Rain? [YouTube via Gizmodo]