If you’re the proud owner of a Google Pixel smartphone, you owe it to yourself to grab the brand-new April update for your device (RQ2A.210405.005) right now. Not only will you benefit from some bug fixes and quality updates, but you’re also going to see a pretty good performance boost if you’re using a Pixel 4a (5G) or a Pixel 5.

When Android 11 dropped back in September of last year, quite a few reviewers found that their newer Pixel devices seemed to take a performance hit. As HotHardware wrote at the time:

Compare that doom-and-gloom to early benchmarks with the April update, which I’d argue should be installed as soon as possible if you’re using an affected device. As Andreas Proschofsky from Der Standard writes:

Turns out the Pixel 5 is now getting way better results in 3DMark. Like in 30-50 percent better compared to a P5 w March patch level. Even the results in general benchmarks like PCMark Work are a bit better (even though in this case really only just a bit). 2/ pic.twitter.com/58Ze5qFE6d

Google’s full list of changes for the April update can be found here, and you’ll find all of the security issues it’s patching with the update here. 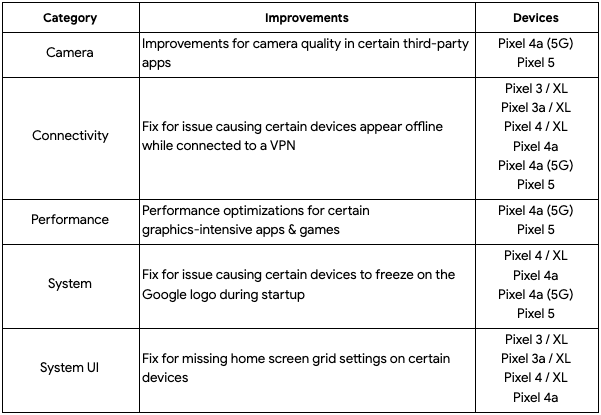 As always, updating your Pixel is an incredibly easy process. Simply visit Settings > System > Advanced and tap on System update to get started.