Every chat service should provide, at minimum, three things: a way to mute conversations so your chatty friends never bother you again, a way to leave conversations without notifying the group that you have, and a way to keep active conversations from popping up at the top of your messages list if you don’t want them to.

WhatsApp might not let you do all three just yet, but at least you can now mute group and individual conversations permanently on the service, which will at least prevent your device from being spammed with notifications that aren’t relevant to you.

To get started, make sure you’re running the latest version of WhatsApp available on Apple’s App Store or the Google Play Store. Launch WhatsApp, long-press on a conversation you want to mute, and tap the mute icon — which looks like a speaker with a line going through it — in the app’s top toolbar (on Android) or at the bottom of the screen (on iOS.)

In the screen that appears, simply tap “Always” and make sure “Show notifications” is unchecked. Now you’ll no longer get pinged when people have added, and added, and added to the conversation. Easy, right? 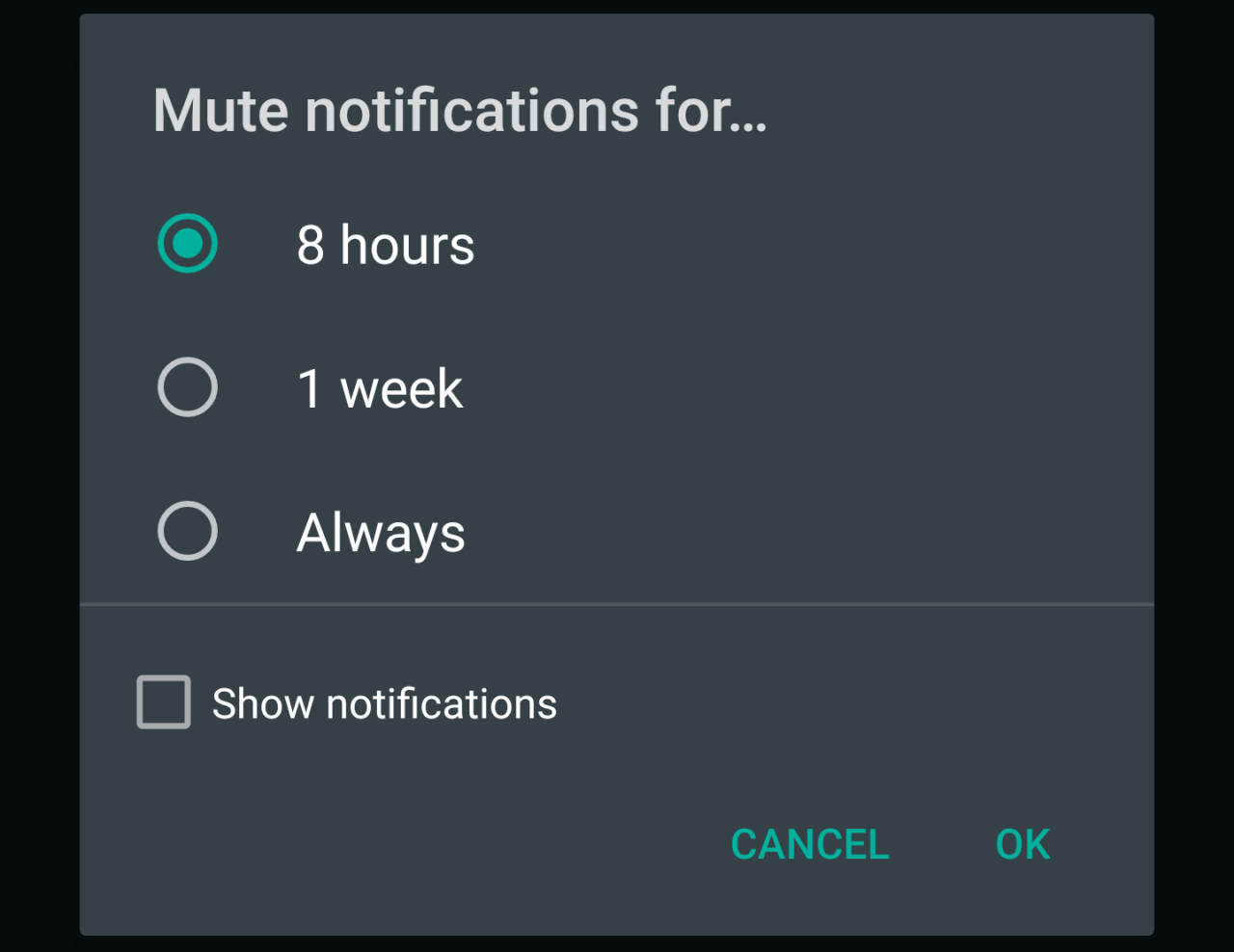 The one quirk of this solution is that it won’t make these conversations go away. You won’t be notified about new messages, but everyone else in the chat will still be able to talk to each other. And when they do, that’ll bounce the conversation to the top of WhatsApp’s list.

If you don’t want this to happen, your only option is to leave the conversation altogether. To do so, tap into the chat, and then tap the triple-dot icon in the upper-right corner on Android or swipe left to access the icon on iOS. Tap on More, and then select “Exit group” to make your final goodbye. An archive of your conversation up until that point will remain on your WhatsApp list, but you won’t see anything new that people say in the group.

Doing so will notify said group that you left, however, which is my personal pet peeve. Every chat app should have an “Irish Goodbye” option; I don’t want my friends to get butthurt because I have no more time for or interest in hearing about their adventures in Animal Crossing: New Horizons. Perhaps that option will be added in some future WhatsApp update; until then, being able to mute everyone forever is its own reward.

(And, yes, you can also mute individual WhatsApp conversations. But if you’re doing that, you might want to rethink your friendship with the person on the other end — unless they’re just really damn chatty.)