If you’re looking for a fast NBN plan, there a couple of ways to gauge performance. The ACCC has a quarterly report, providers self-report evening speeds, or you could check out what Netflix has to say.

Rather than looking at overall internet speeds, the leaderboard details how well these telcos keep up when everyone is trying to binge Netflix during the busiest hours of the day. This, however, is still a pretty decent proxy for working out which providers are doing a top-notch job in general.

Read more
” excerpt=”Not all internet providers are equal – especially when it comes to the NBN.”]

Netflix has now published results for August, but before we look at the data, it’s worth pointing out that some providers have separate rankings for NBN performance and non-NBN performance. Other telcos have their NBN and ADSL speeds aggregated into a single result.

Here are the full results from August: 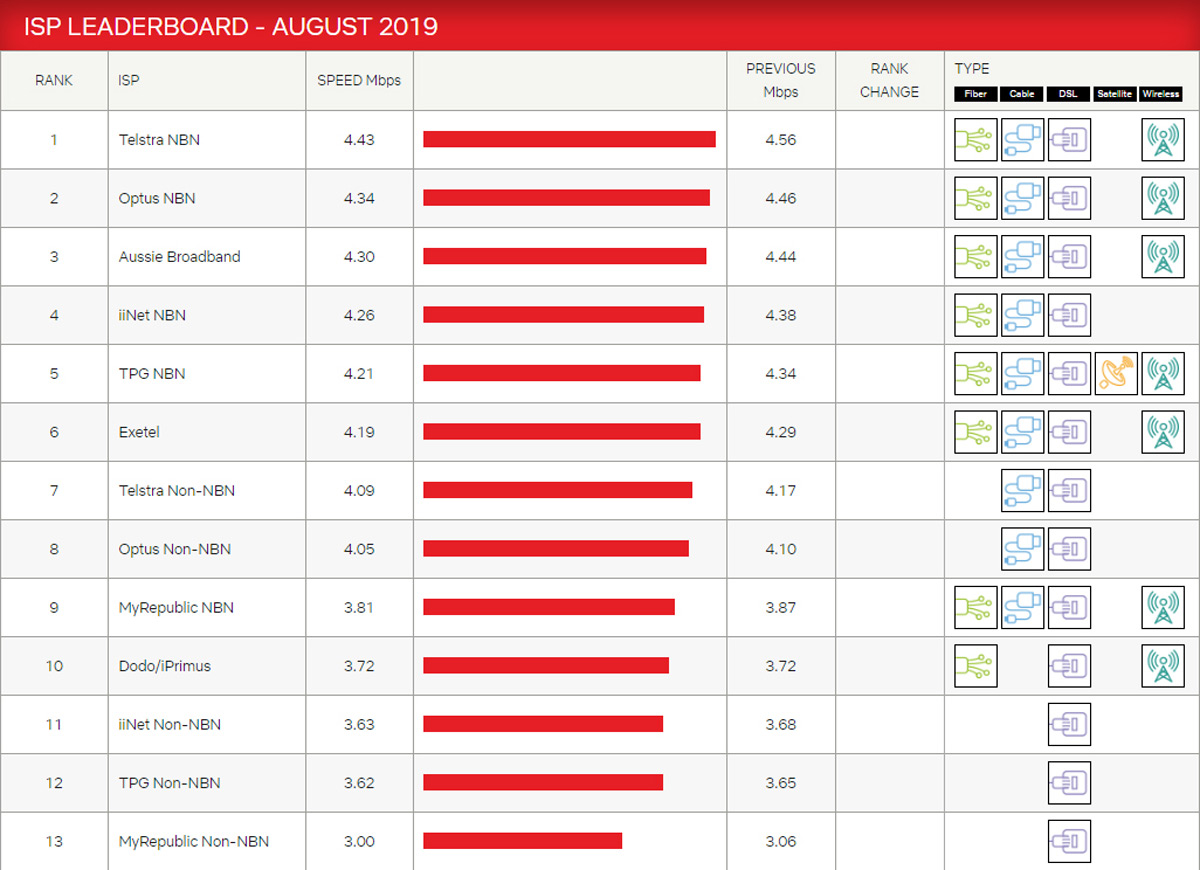 And here’s a look at some plans from these providers:

Telstra doesn’t have an NBN 100 plan in its standard range, so we’ve included a separate table with its NBN 50 option instead. To get NBN 100 speeds on Telstra, you’ll need to sign up for an NBN 50 plan and bolt on a speed boost for an extra $30 per month.

That means you’d be spending a minimum of $120 per month to get an NBN 100 plan on Telstra.

For comparison, Optus, which ranks just behind Telstra in the latest Netflix Speed Index, will charge you $100 per month. Aussie Broadband is just a hair behind in the index and in pricing, at $99 per month. With Optus, you have to the choice of committing to a 24-month contract or paying a $200 setup fee. Aussie Broadband plans are all contract-free with no setup fees.

If price is your main consideration, MyRepublic has the cheapest NBN 100 plan out of this lot thanks to a WhistleOut exclusive promo. You’ll pay $79.95 per month for the first six months, and then $89.95 per month thereafter. You will have to sign a 12-month contract to get this deal, however.

When it comes to NBN 50 plans, TPG has one of the cheapest options here at $69.99 per month. While TPG comes in at #5 on the Netflix leaderboard, the ACCC has consistently found TPG to be the fastest NBN provider across the last couple of quarters of its Measuring Broadband speed test program. If you’re keen to go with TPG, you can either sign an 18-month contract or pay $99.95 upfront to avoid getting locked in.

Speed leader Telstra is again the priciest at $90 per month, but most other plan options from providers on the Netflix index sit between $70 and $80 per month.