How To Carve Video Game Characters Into Your Jack-O’-Lanterns

Halloween is officially a “thing” in Australia. Deal with it.

We’ve done the usual triangle-eyes-and-toothy-grin jack-o’-lanterns in my home plenty of times. We’ve carved pumpkins, we’ve painted pumpkins, we even did this one year for whatever reason: 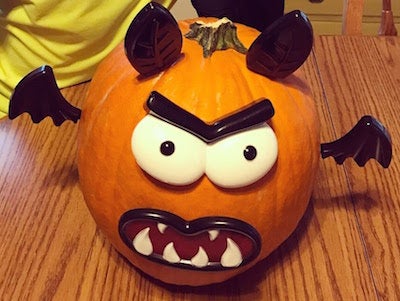 We’re ready for a new challenge, so this year, we’re letting my son’s passions be our guide as we decide what to carve: We’re getting our inspiration from video games.

The idea started when I stumbled upon this Instructables guide to creating a Minecraft jack-o’-lantern. The post doesn’t include a printable version of the pattern, but the directions are easy enough that you could create one on your own. (Or you can download and print this creeper and follow his instructions.)

My son likes Minecraft, but he’s way more into Pokémon and Mario at the moment, so my quest for other video game-inspired jack-o’-lantern patterns continued. Pumpkin Pile has a few dozen video game pumpkin carving templates, primarily from Minecraft, Angry Birds and Mario, but also a few other options, including Pac-Man, Fortnite and Sonic. Here are a few particularly good ones:

And I know that emojis don’t exactly fit into the video game genre, but a poop emoji carving will be a kid-favourite every single time. (Right-click and “Save As” or drag to your desktop to save and print.)

If you’re a carving novice — or, like me, you’re just not particularly good at it — Pumpkin Pile has detailed instructions with a push-pin technique that I’ve somehow never heard of and will be trying this year.