Why You Should Wait To Buy The Samsung Galaxy Fold 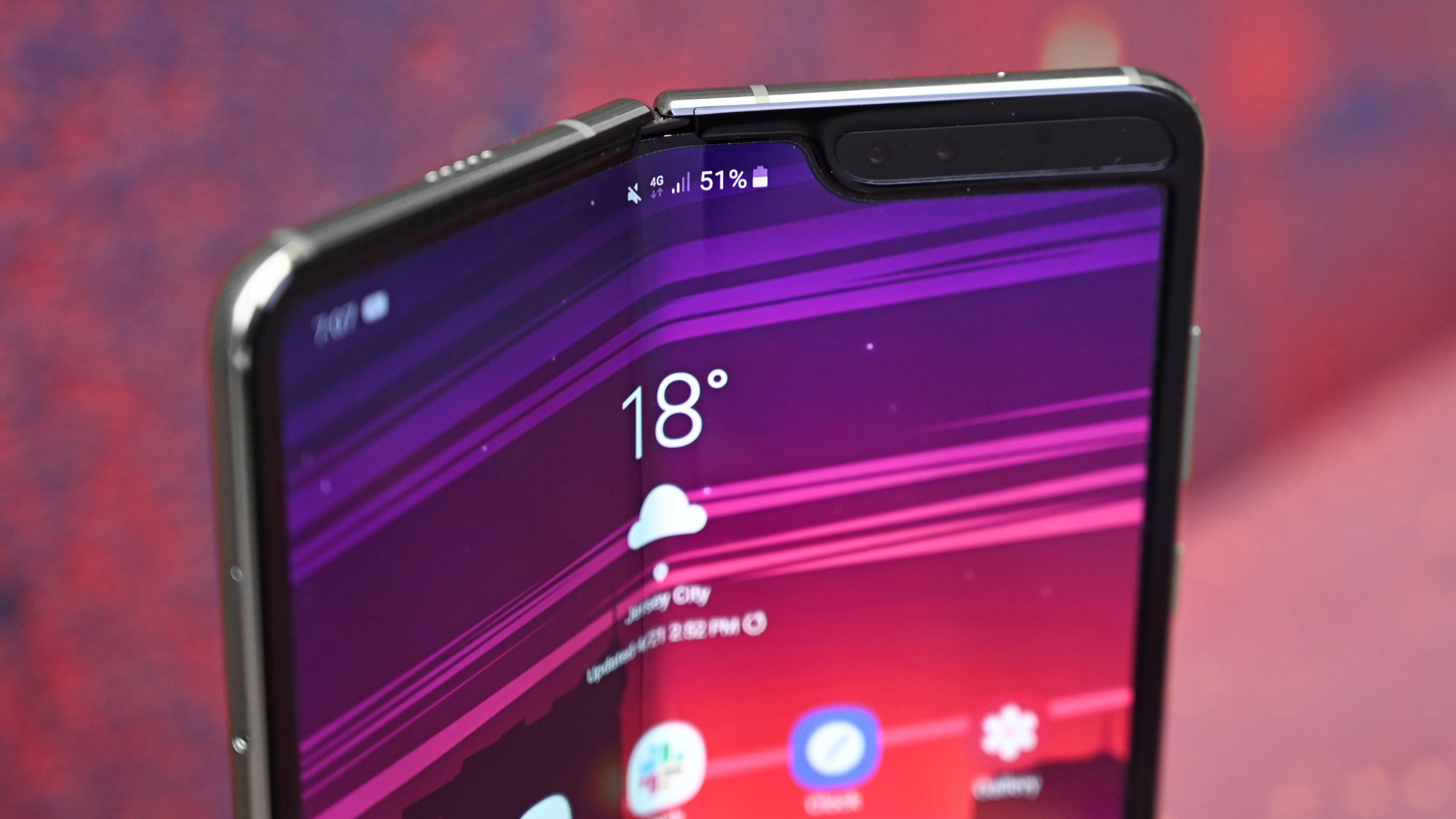 I’m slightly more excited to see a Samsung Galaxy Fold, now that the manufacturer has fixed all the issues with the initial batch of review units the company sent out this Autumn. The biggest of these was the thin protective layer of polymer, which initially looked like the kind of screen protector you’d peel off of your device before you started using it”not the case at all for the Galaxy Fold, as doing that would severely mess up your device.

Now that Samsung has made it practically impossible to peel off that polymer, and reinforced other aspects of the device’s hinged design, the Galaxy Fold is finally ready for prime time. Does it deserve a spot in your pocket, though? I’m unconvinced ” and I don’t think this is a device you’re going to want to pre-order so you can essentially beta-test the brand-new experience.

You could buy an awesome laptop instead

Real talk: The price of the Galaxy Fold sits at a cool $US1980 – and that’s in the US. You can expect the Aussie price tag to be well over $2000. (While there’s currently no word on when the Galaxy Fold will be hitting Australia, or what how much it’s going to cost, we know it’s coming.)

On one hand, the high price tag makes perfect sense, since the Galaxy Fold is basically two premium smartphones mashed together. That said, you actually get less screen size to play with (18cm on the diagonal) than if you actually found a way to attach two Galaxy S10+ devices to one another.

I realise we now live in an era where over $1700 for a smartphone is the new normal. And even if you said that five years ago, nothing would be any different. And while there are plenty of great modern smartphones you can get for under $1000 ” here’s looking at you, Google Pixel 3a ” I think we’ve all been desensitised to four-digit prices for premium devices.

Desensitised, that is, but not completely numbed. Plunking down more than $2000 for a smartphone feels like a fool’s errand. I think technology has advanced enough that your device probably isn’t going to feel obsolete in a year or two. Heck, I’m still rockin’ an iPhone X (2017), and I don’t think I’ll need to do any shopping for something new this year.

There’s no doubt in my mind that Samsung will release an updated Galaxy Fold someday ” assuming the original sells well enough ” that gives you a prettier-looking screen on the front instead of that tiny, ugly 13cm display with the gigantic black borders on the top and bottom. You’ll probably also get a thinner device with less weight and better battery life, as well as something you can draw on with a stylus. That seems to be a critical omission in this first-round foldable device.

While it is silly to put off buying something because you worry a will release a better version a year or so from now, there’s also something to be said about letting everyone else get in on the ground floor of a brand-new category. If you’re patient, you might be able to save some cash with the follow-up device that, ideally, has a lot of the initial bugs worked out. I mean, just look at what Samsung was willing to shovel reviewers earlier this year; imagine what a disaster the company would have experienced if it launched the Galaxy Fold in April”polymer screen, broken displays, and all. In this case, I’d wait for Samsung’s tock, not its tick.

That is one thicc smartphone

You’re going to feel awfully cool holding your unfolded Galaxy Fold in front of your face, playing games, reading the news, or using three apps at once on its gigantic (for a smartphone) display. You’re going to feel a lot less awesome when you’re done with whatever it is you’re doing and you have to fold the smartphone back up and carry it around”unsightly pocket bulges to the extreme. 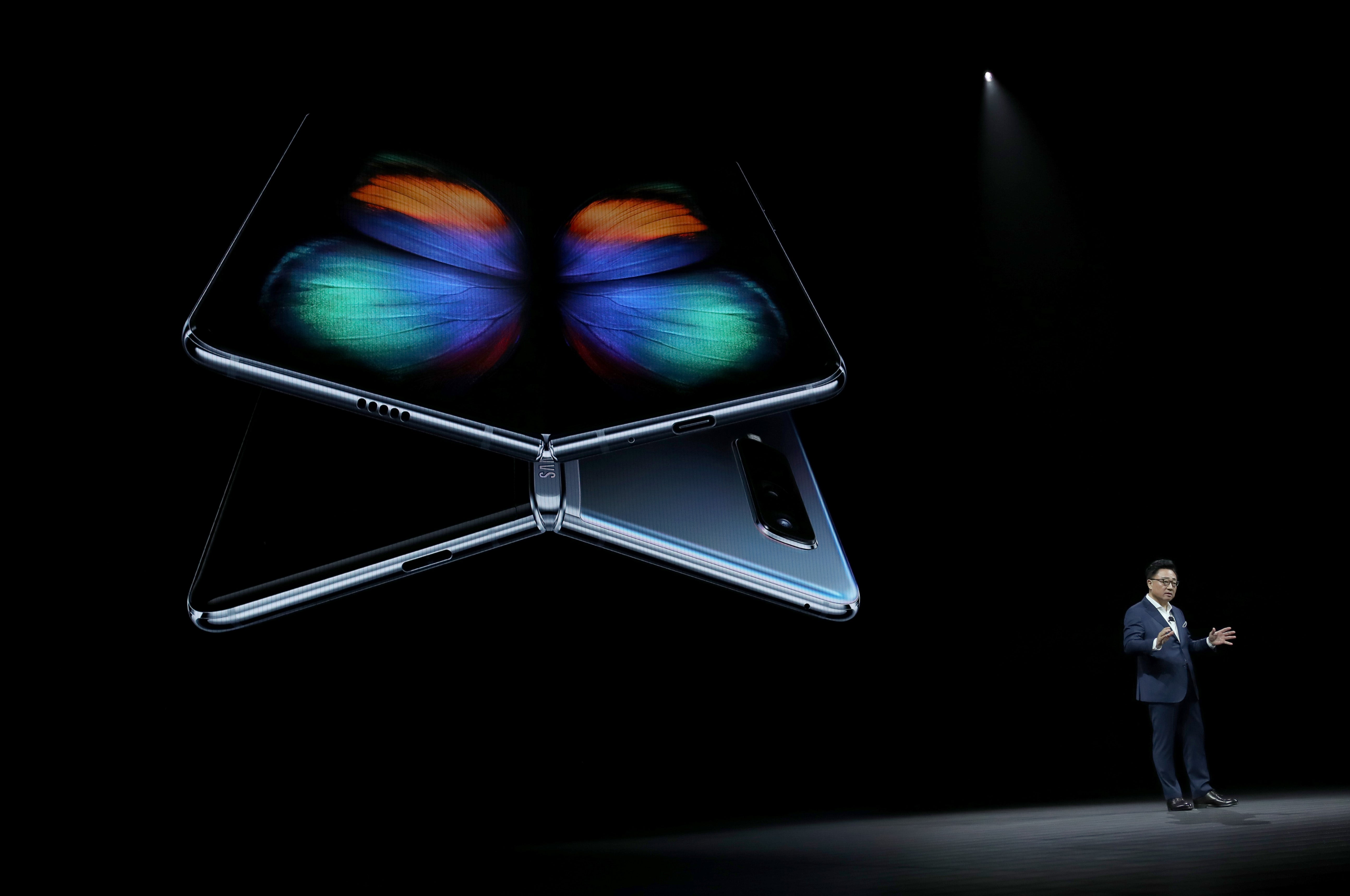 While that mashing-two-smartphones-together analogy might have sounded a little silly earlier when I was referencing the Galaxy Fold’s screen size, it’s completely apt when talking about its thickness. Because when you fold that device back up again, it’s like stacking two smartphones on top of one another and stashing that monstrosity into your pocket.

I’ve sometimes had to carry two smartphones around for work or testing, and it makes you look stupid as heck when you put them both in the same pocket of a tight pair of jeans. Obviously, the solution is to split them up, but you won’t have that luxury with the ultra-thicc Galaxy Fold. As my colleagues at Gizmodo described when Samsung first announced the Galaxy fold:

“Let’s give a generous interpretation of the possibilities. The Galaxy S10 is 7.8mm thick. Let’s say that somehow the new device is thinner than two of those sandwiched together. Even at 14mm, it would be considerably thicker than the first generation Samsung Galaxy from 2009 (11.9mm) or the first generation iPhone (11.6mm). It’s almost exactly the thickness of the Nintendo Switch. I’ll wait so you can fish your Switch out of your backpack and decide if you want a “˜phone’ that thick in your pocket.”

The only thing they were wrong in that description was their estimate of the Galaxy Fold’s thickness. It’s bigger. I gave the inches above, but Samsung’s official specs put the Galaxy Fold at anywhere from 15.5 to 17mm thick when folded up. That’s a hefty smartphone, and more than you might want to deal with when you’re on the go.

If it’s not popular, apps won’t optimise for it

In reading various early reviews of the Galaxy Fold, I was troubled by one glaring issue that Engadget’s Chris Velazco brought up when moving apps from the device’s smaller “normal” screen to its gigantic larger screen:

“Most of the software I use regularly, like Kindle, Chrome, Slack, Gmail, Todoist and Twitter, handles the big-screen transition without fuss, allowing me to pick up where I left off. Other apps, like Lightroom CC, aren’t quite as graceful. In those cases, opening the Fold reveals a standard smartphone-sized app window flanked by big black bars. This hasn’t happened often since I started testing the Fold, but the fix is always the same: You have to close the app and restart it on that big screen to get the full effect. If you happen to rely on apps that don’t fully support the Fold’s screen trickery, this is going to get old fast.”

I expect that most app developers will have to tweak their software to play nicely with foldables at some point, but I don’t envision them rushing to do so as long as these early devices are priced as high as they are. The cost is going to have a big impact on the install base”since your average person doesn’t buy a $2000+ smartphone ” and like virtual reality, I don’t think most developers will be running out the door to ensure their app looks perfect on a 18cm, 4:3 display that not a lot of people own. As Velazco also describes:

“The number of tablet-optimised Android apps is pretty small, too, and whether you get that experience on the Fold seems like a crapshoot. Only a few apps, like Gmail, recognise that it should serve the Fold its tablet interface; every other app I’ve tested treats this thing like a big phone with a slightly weird, 4.2:3 aspect ratio. Some apps like Instagram fill both of the Fold’s screens but not correctly. When I was sifting through people’s Insta Stories, the tops and bottoms were always cut off. On the smaller, front-mounted screen, the sides were truncated. Google is bringing proper support for foldable devices to its forthcoming Android Q release, but until then, developers who care about supporting early foldables will have to put in some Galaxy Fold-specific extra work here.”

Back to the price for a moment: I think that this experience, above all else, will sour people to the Galaxy Fold pretty quickly. When you’re paying that much for something, you want it to work without issue. You don’t want to wait for your favourite apps to catch up; you want them to look gorgeous on your expensive smartphone the minute you finish setting it up. You don’t want to have to wait fo an app update to arrive”if it ever does”to look incredible.

It remains to be seen just how easy it will be to tweak apps for foldables in Android Q. More importantly, we have no idea how long it might take Samsung to roll out Android Q to its smartphones. Since the company is notoriously slow about this, it’s possible the Galaxy Fold might be stuck with Android P for some time. No app optimisations for you, owners of $2000+ chunky smartphones.