Windows 10 May 2019 Update: Everything You Need To Know

Microsoft officially launched the Windows 10 May 2019 update today for all to consume—all who haven’t already been beta-testing it for months, that is. Acquiring said update is easy. Click the Start button, type in “Updates,” click on the “Check for Updates” option that pops up, and click on the can’t-miss-it “Check for Updates” button in the subsequent screen. If you see a listing for a “Windows 10, version 1930″ update, that’s the one you want.

If you don’t have that option, you can instead use Microsoft’s Update Assistant, a separate utility that will allow you to download and install the latest update without issue. You can even join the Windows Insider program and only subscribe to release-track updates—your choice!

While I don’t anticipate any disasters with this update (unlike previous ones), those unwilling to walk on the wild side should also consider backing up their systems before installing. I always mean to, but excitement gets the better of me.

As the download chugs its way on over to your system and begins installing, here’s a quick look at what you have to look forward to in the May 2019 release.

Finally, Microsoft has baked this awesome security feature right into Windows 10. The premise is perfect: You run apps in an isolated desktop environment so they don’t mess up your actual PC if they do something bad. On paper, however, this feature isn’t as fun for most people because Microsoft is only releasing it for Windows 10 Pro or Windows 10 Enterprise users.

(Nothing personal, Windows 10 Home users. You need to be able to tap into virtualisation via the OS, which your paltry edition of Windows does not support.) 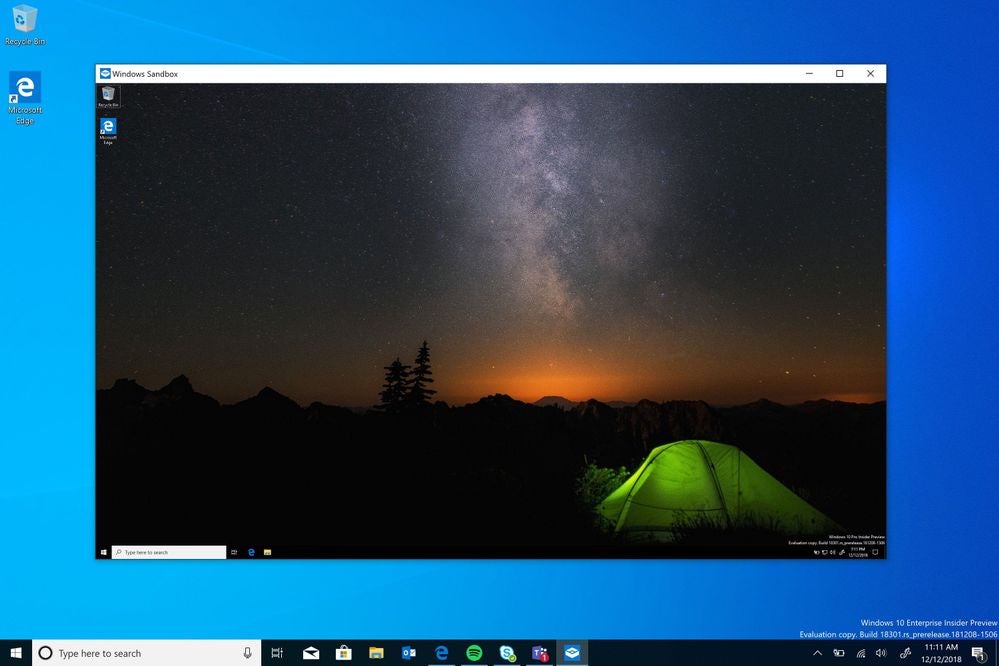 Don’t worry, though. For those stymied by Microsoft’s strategy, there’s always the third-party app Sandboxie. It’s free, too! Otherwise, getting started with Windows Sandbox takes a little legwork, but it’s well worth the time spent.

Step into to the light (theme)

I’m a sucker for dark themes in any operating system, app, or website, so this one pains me a bit to type out. Microsoft has packed a new light theme into the May update for Windows 10. Accessing it is easy—though you might not want to go with the default “theme.”

Click the Start button and type in “Personalisation,” and then click on the “Themes and related settings” option that appears. Look! It’s themes! Click on “Windows (light)“ to immediately switch over to the new look (and wallpaper). I like to keep my ‘paper the way it is; if you agree, click on “Colours” on the left-hand sidebar instead. 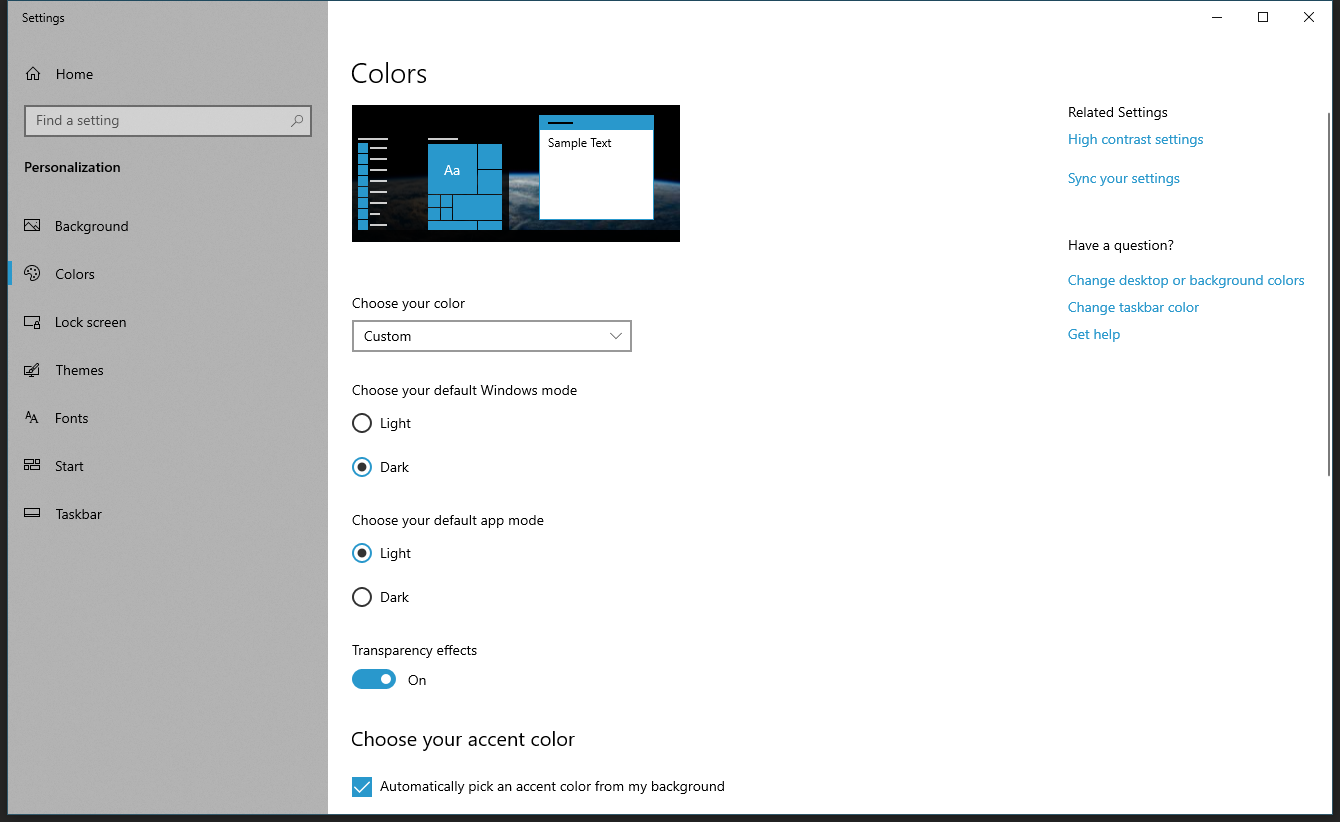 Here, you’ll see a few different ways to set “light” and “dark” modes for various parts of the Windows 10 operating system. The “choose your colour” option lets you make set light or dark as a systemwide choice. If you want to get specific, select “custom.” You’ll now be able to choose the style you want for Windows 10’s system UI and apps.

Setting the former to “dark” and the latter to “light,” for example, will give you a black taskbar and Start menu, paired with a white File Explorer and Settings screen. Mix and match as you see fit. (For consistency’s sake, I think the system-wide “choose your colour” option creates the best look, but that’s just me.) 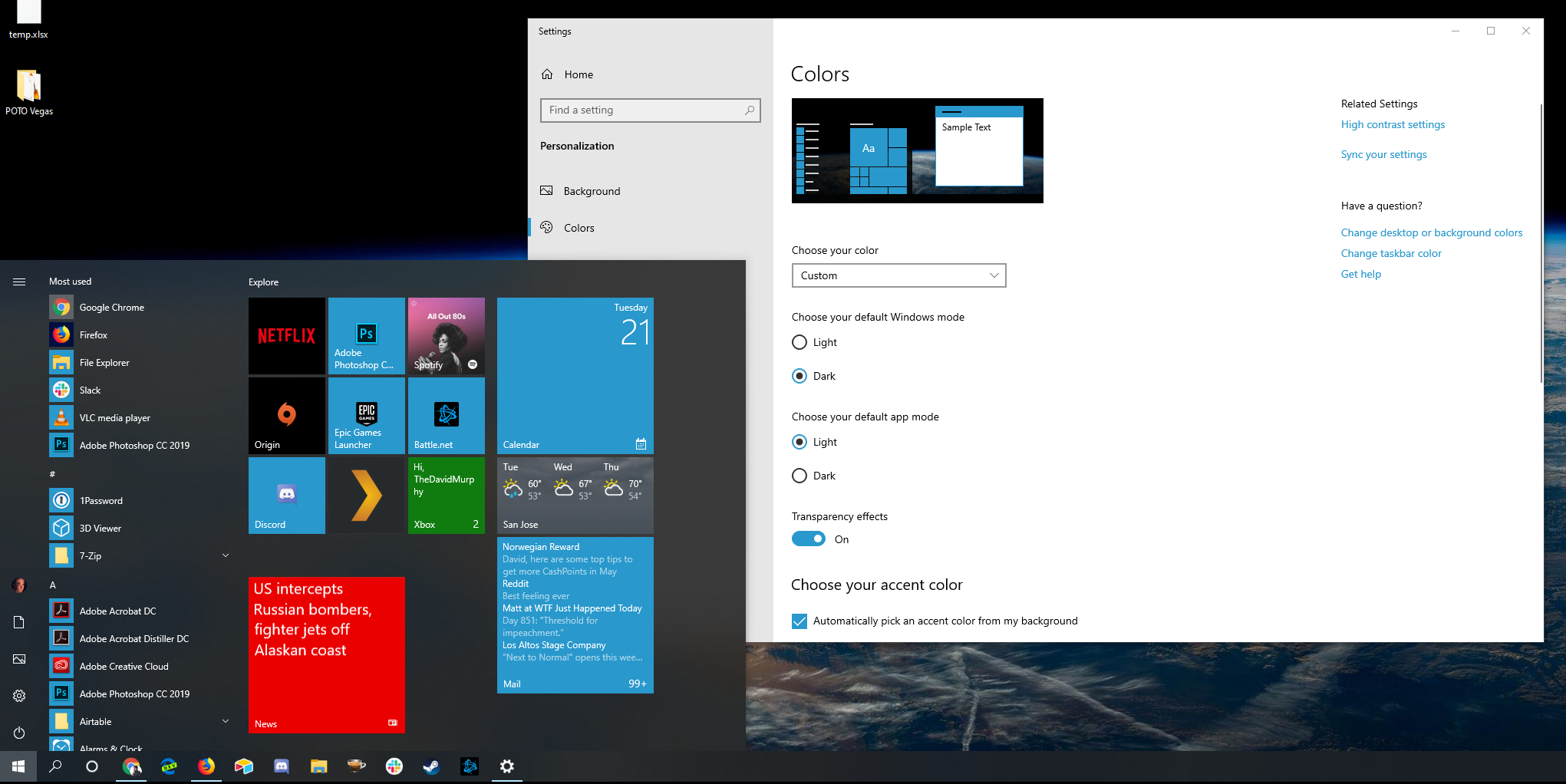 This one’s quirky, but hear me out. Owners of Windows 10 Pro or Enterprise have the option to pause all Windows updates for a decent amount of time (35 days, as of when I wrote this). At the end of that time period, you’re forced to install whatever updates you have been putting off before you can re-enable the delay mechanism.

For business users, this option is great, because you probably want to confirm that key systems won’t be negatively affected by a big Windows 10 update before you roll it out everywhere. For most home users, this is a terrible option—at least, that’s what I thought, until Microsoft bungled the aforementioned October 2018 update over and over.

Now, Microsoft is giving all Windows 10 users a quick and easy way to pause Windows Updates for seven days. Look for the option right on the Windows Update screen. You can’t miss it. 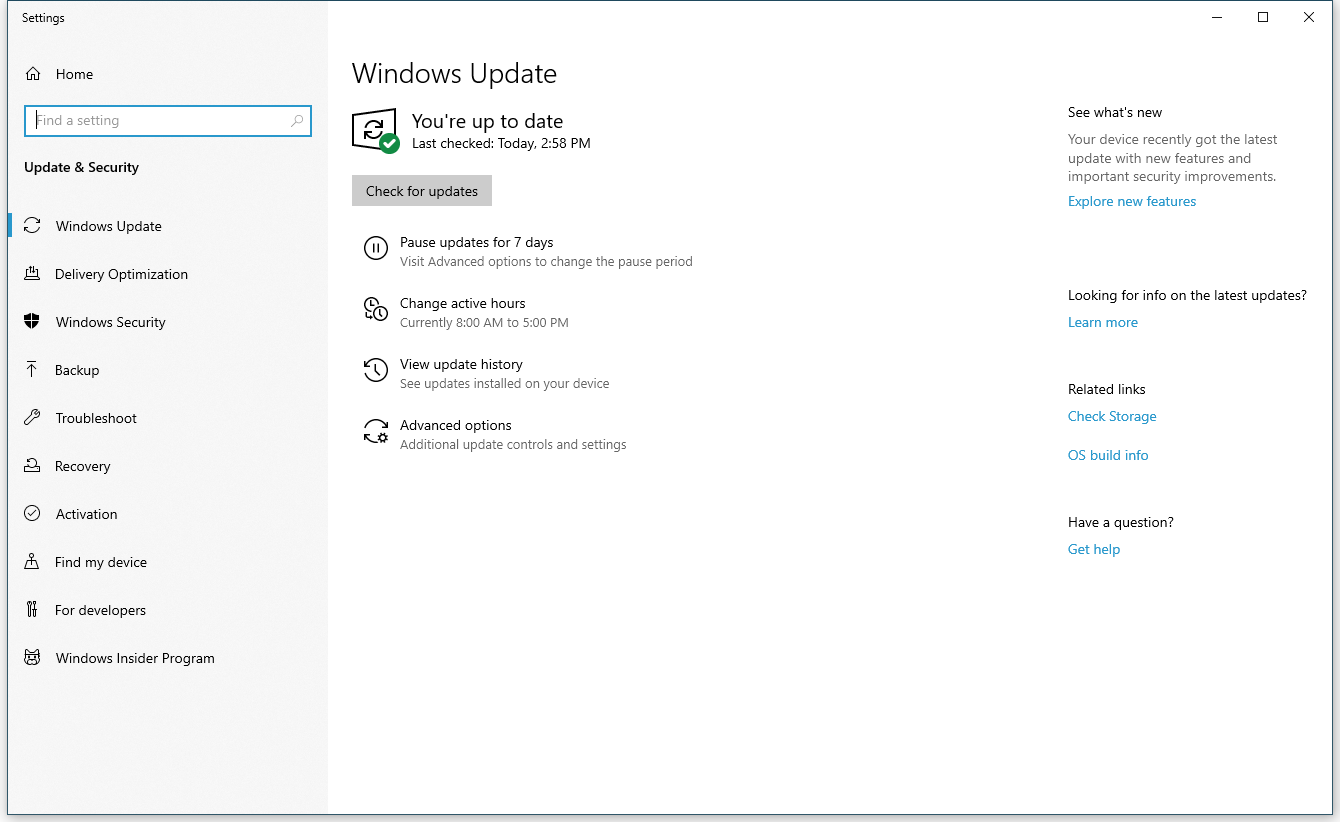 Click that, and you’ll delay your updates for a week. Click it again, and you can add on another week. You can mash it for up to five weeks’ worth of time—the same that Windows Pro and Enterprise users get with their (formerly) exclusive advanced option.

A typical Windows 10 installation packs all sorts of apps onto your system that you might not need or want. You can uninstall some of them from the get-go—Skype, Weather, OneNote, et cetera—but not all. While you still can’t just install a barebones version of Windows 10 without any crappy or marketing-themed apps taking up room, you do get the opportunity to uninstall a bit more, courtesy of the May update.

As Paul Thurrott wrote earlier this year, apps now eligible for the the digital chopping block include: 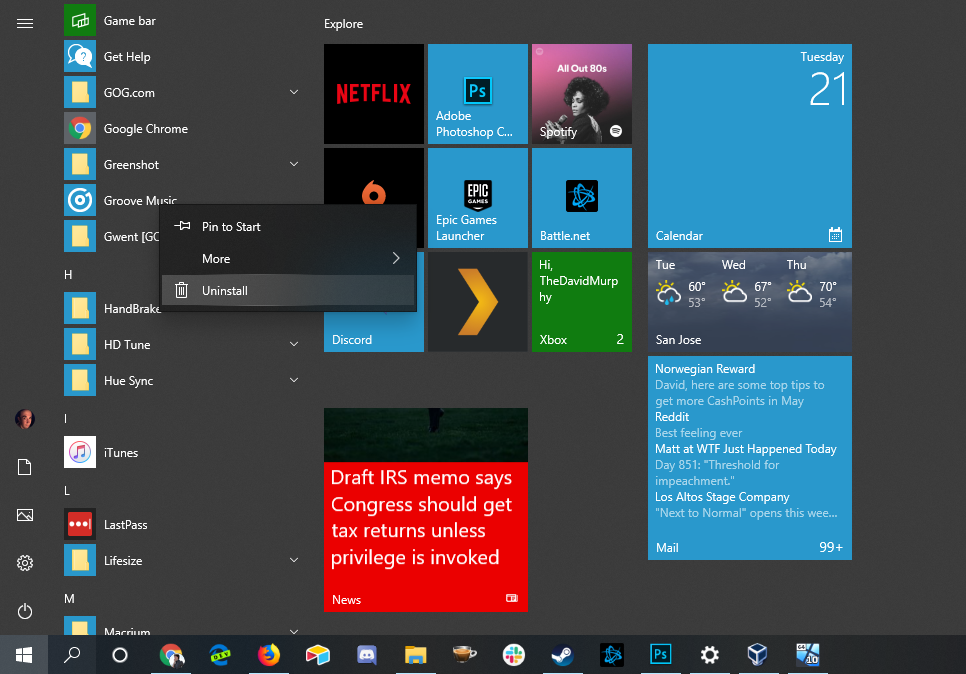 Copying to the Cloud Clipboard

Microsoft has updated the UI of Windows 10’s Cloud Clipboard in the big May update. I’m willing to bet you didn’t even know Windows 10 had a cloud-based clipboard to begin with. (Strangely, it’s powered off by default.) 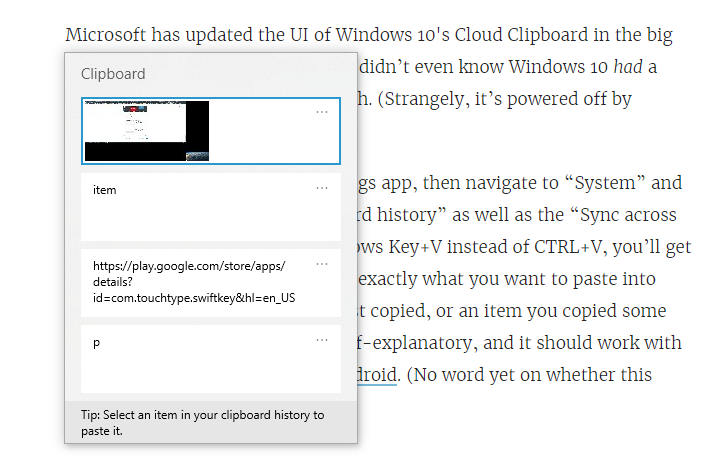 To change that, pull up your Settings app, then navigate to “System” and “Clipboard.” Turn on the “Clipboard history” as well as the “Sync across devices” option. Now, if you Windows Key + V instead of CTRL + V, you’ll get a little pop-up where you can pick exactly what you want to paste into whatever—be it that which you just copied, or an item you copied some time ago.

The “sync” feature is self-explanatory, and it should also work with the associated SwiftKey app on Android. (No word yet on whether this feature will ever make it to iOS.)

I used to hate having to type in an ALT code on my keyboard just to drop an em dash into my articles. Now that I’ve switched to a tenkeyless keyboard, the process is even more annoying—I have to set up a hotkey combination just to access the lovely “—,” and it eventually messes up until I restart my system.

Now, thanks to the Windows 10 May update, I can hit Windows Key + ; to pull up a brand-new emoji panel, which also contains a bunch of symbols. I shall now demonstrate its power: ????Ă’®↯Ω. 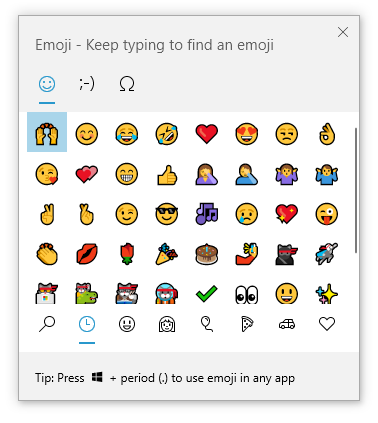 Make your mouse pretty (or crazy-huge)

This one is one of the quirky features I’ve seen in a Windows update, but I like it. The Windows 10 May update now allows users to customise their mouse pointer—wild, I know. Hear me out. Pull up Settings, and then click on Ease of Access. Click on “Cursor & Pointer,” and you’ll be able to adjust a number of parameters, including its size and colour. Want a gigantic neon green mouse pointer? Why not? Live wild. 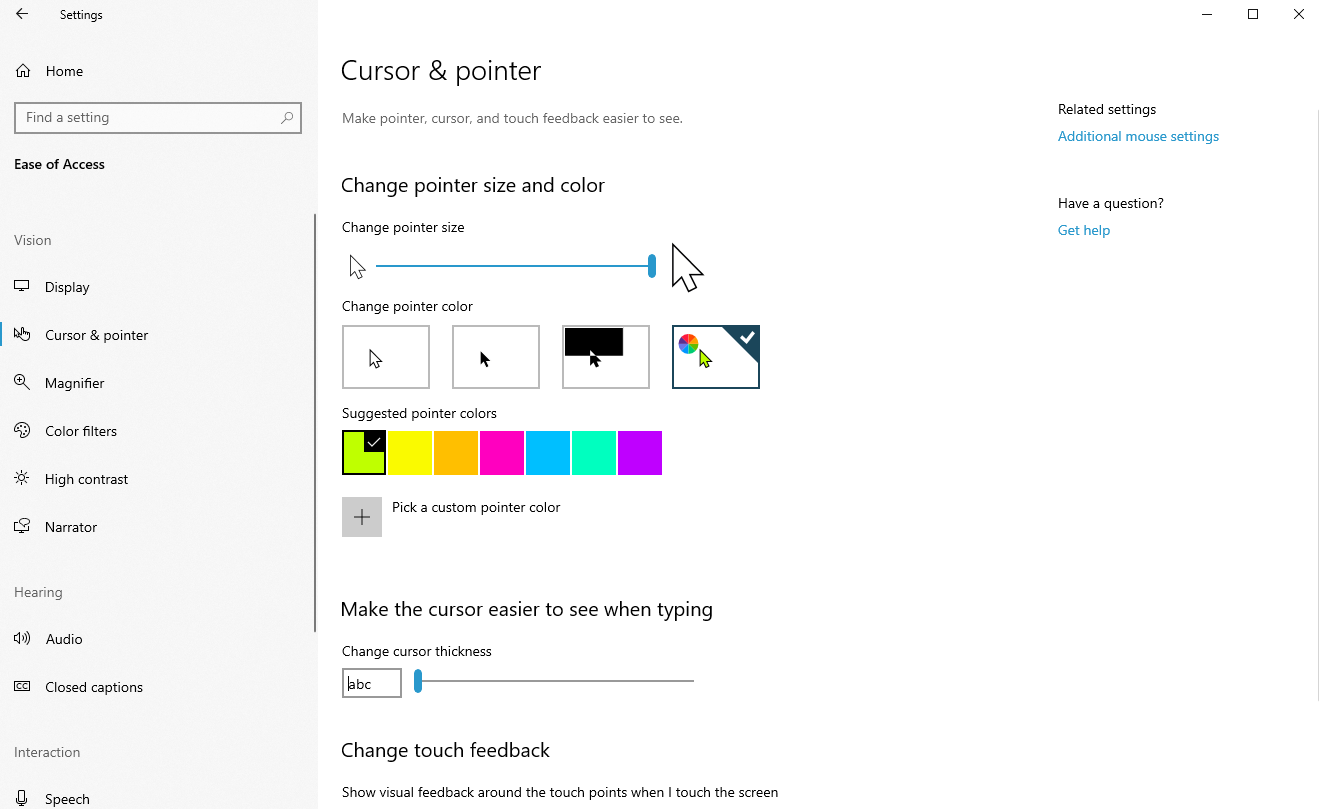