How To Introduce Your Kid To Studio Ghibli

Studio Ghibli films have been a touchstone in my life for years. They’re artistic masterpieces, featuring a stunning attention to detail. The films defy stereotypes — they feature female protagonists with great depth, male leads with striking vulnerability, and unforgettable background characters.

While the films are not perfect — with a few being controversial or even disappointing in certain aspects — they’re worth sharing with your children. Here’s how to do it.

We refer to Ghibli movies as “quiet films” in my house, because of the stories’ generally peaceful pacing and tone, even when war or chaos is present in the plot. (The lush musical scores by Joe Hisaishi only adds to this aesthetic.) Even so, some young children may find elements in some of the Studio Ghibli films to be confusing or frightening. You need to gauge the maturity levels of your tiny humans beforehand, including how they handle abstract concepts or “the unknown.”

Be honest with yourself — don’t try to get them to watch a movie before they are ready for it just because you want them to join the fandom as early on as possible. Keep in mind that these films require patience from viewers, and it may take repeated exposure for some children to fully appreciate or understand the artwork, storylines, or characters.

Do a Little Prep Work

A little research will help you and your kids to have a more nuanced appreciation for Studio Ghibli’s offerings. Start by reading the original Howl’s Moving Castle by Diana Wynne Jones or a translation of Kiki’s Delivery Service (魔女の宅急便 or Majo no Takkyūbin) by Eiko Kadono aloud to your children at bedtime. Consider occasionally reading from various translations of Japanese folktales and history written for children, too. Talk to your kids about the food, clothing, and traditions of various cultures, including Japanese culture.

Consider re-watching the Studio Ghibli titles you haven’t seen in a while or renting copies of the movies you haven’t seen yet. Take notes when watching the actual animated films — things you liked, things you didn’t understand, and things that you need to think about when it comes to appropriateness for kids of various temperaments, personalities, and ages. If you know ahead of time what parts of the films might confuse or scare your children, you can better plan what to let your kids watch and when.

If you really want to go all-out, read Hayao Miyazaki’s books, Starting Point: 1979-1996 and Turning Point: 1997-2008 on your own. You could even watch the documentary The Kingdom of Dreams and Madness (夢と狂気の王国 or Yume to kyôki no ohkoku) on DVD or via a streaming service like Netflix. This will provide some context about Studio Ghibli’s history.

Go for the Merch

Decorating your children’s bedrooms with beautiful art prints inspired by Studio Ghibli movies is an easy way to introduce younger children — especially infants and toddlers — to the films when they are too young to understand or pay attention to the animation or stories. You can find a lot of stunning fan art on Etsy.

Even plushies and cute clothes do a lot for familiarising small children with the stories and characters in advance: We have a Totoro plush that my kids can’t live without, and we all have some Studio Ghibli shirts that are as cool as any retro band tee, and we found them all at Hot Topic.

It makes sense to have younger children watch the dubbed versions of these films, but if your kids are up for watching the movies in Japanese with English subtitles, go for it. It changes the feel of the story for the better in many ways, and it holds closer to the original vision for each film. All Studio Ghibli films are distributed in North America by Disney or GKIDS, and you can easily purchase the DVD or Blu-ray versions on Amazon or other online retailers. For the sake of simplicity, I’m only including the English titles for each film in this list. 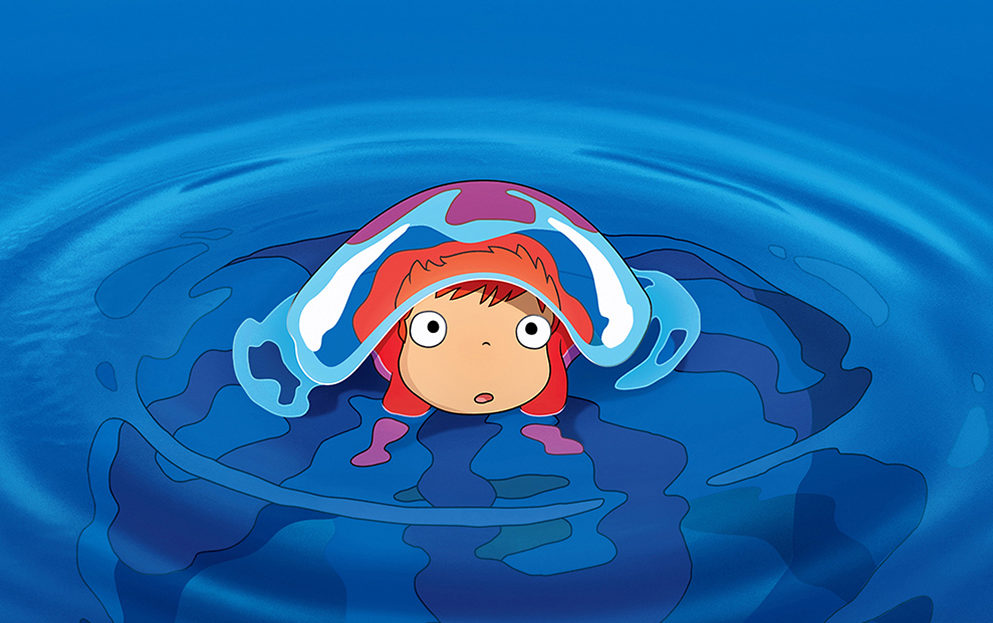 My Neighbour Totoro and Ponyo. While children as young as two might appreciate these, both titles do have a leisurely pace, like all Studio Ghibli films. They are charming, whimsical stories, but younger children with short attention spans might struggle to stay engaged. (I say that, but I am guilty of letting my youngest watch these as an infant when I had to work. We all do what we must, right?) 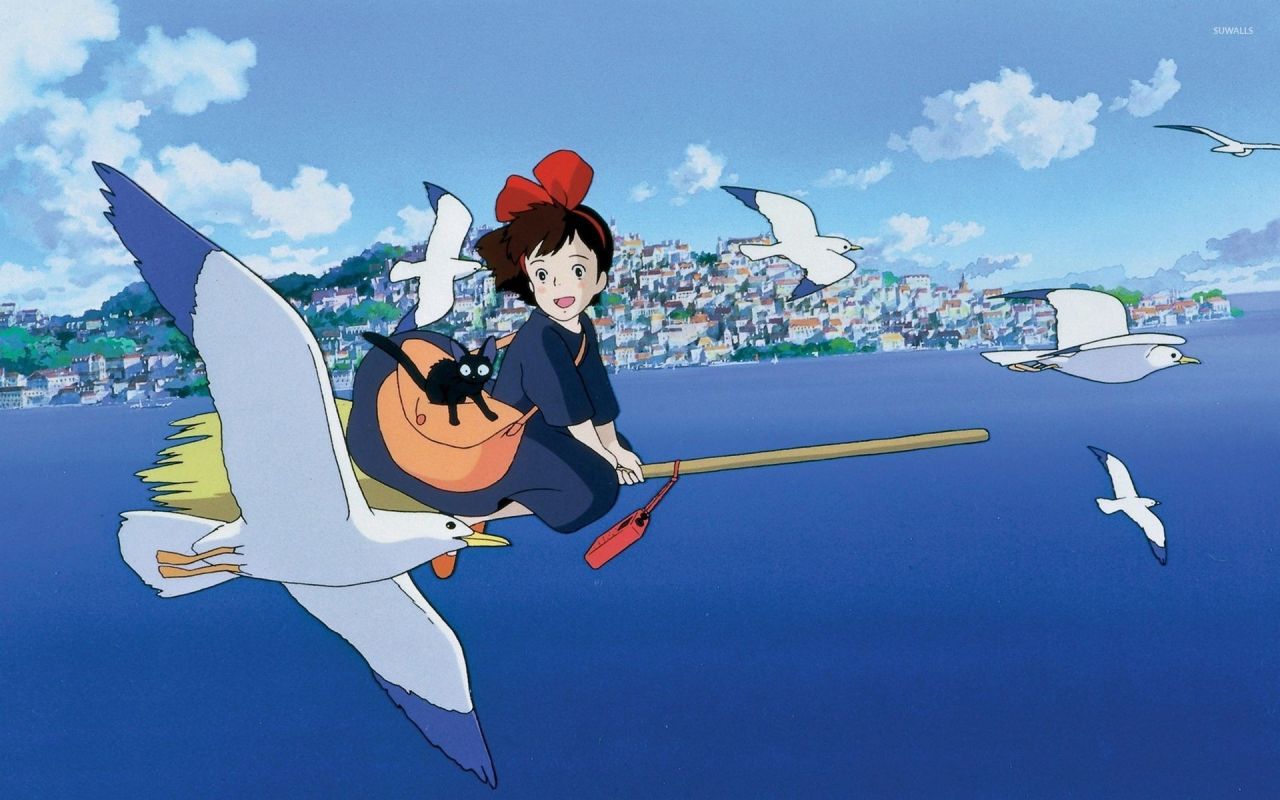 Kiki’s Delivery Service; Howl’s Moving Castle; Castle in the Sky; The Cat Returns; My Neighbours the Yamadas; Pom Poko; and The Secret World of Arrietty are appropriate for all ages, but children younger than age 6 might struggle to understand certain story details and character dynamics. There are battle scenes in Howl’s Moving Castle and Castle in the Sky that might scare younger viewers, too. The Secret World of Arrietty features a boy with a congenital heart disease who is grappling with the possibility of dying. All these movies, however, inspire wonder and encourage children to be brave while trusting themselves. Great messages for any audience, really. 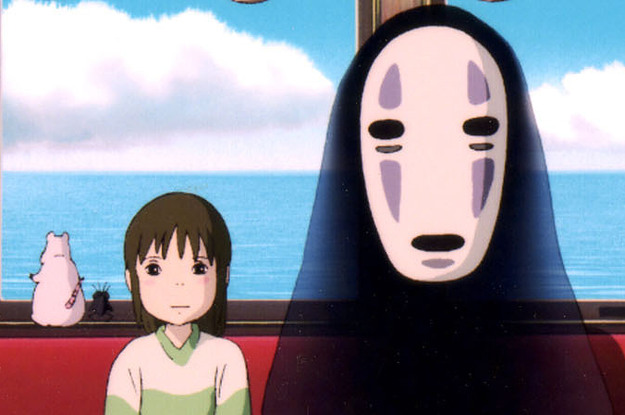 Spirited Away and Whisper of the Heart are both appropriate for children age 8 and up. Spirited Away is full of beautiful details drawn directly from Japanese folklore and history. There are some dark aspects to the tale in the form of characters No Face and Haku, and some scenes with blood that might startle younger viewers. That said, it’s one of the most gorgeous, emotional films I have ever seen. It’s the kind of film every person should watch. Whisper of the Heart is a teenage romance, but it’s tame and has a lot of fairy-tale elements that make it lovely and sweet. It also emphasises the importance of hard work to achieve your dreams. 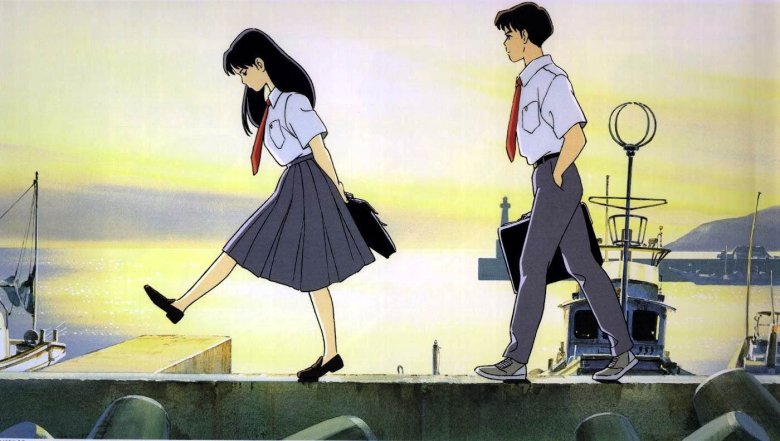 Ocean Waves; Only Yesterday; When Marnie Was There; and From Up on Poppy Hill are appropriate for most kids age 10 and up. Note that these movies are slice-of-life stories. They are beautiful anime with subtle emotional depth.

Princess Mononoke; Grave of the Fireflies; Tales from Earthsea; The Wind Rises; The Tale of Princess Kaguya; and Porco Rosso are probably best reserved for teenagers. Violence and some mature themes are more apparent or graphic in these titles. In Princess Mononoke, a man and later a mystical being are beheaded at different points in the story. In Grave of the Fireflies, two children struggle to survive the horrific aftermath of WWII in Japan.

It’s worth mentioning that The Wind Rises is considered controversial for many reasons, including the fact that the protagonist is involved with creating war planes for the Axis powers during WWII. Nearly all Ghibli stories include an anti-war sentiment, but this film still should be accompanied by a discussion about the complexities and atrocities of war.

More Animation to Check Out

There are many more movies and film shorts that well-known names — including Hayao Miyazaki, Isao Takahata, Yoshiaki Nishimura, and more — have worked on before or beyond Studio Ghibli. They are all worth your time, but be sure to watch each option before your kids do, just to make sure it’s something you think suits your children’s interests and maturity.

Miyazaki has recently come out of retirement to complete one last film, How Do You Live?, for his grandson’s sake. It should be released sometime in the next few years. While you wait for that to come out, go rent or buy a copy of Yoshiaki Nishimura’s Mary and the Witch’s Flower from his new animation studio, Studio Ponoc. Ponoc is the artistic heir to Ghibli’s anime legacy.