If your hard drive is starting to fill up, you may be wondering what exactly is taking up all that space. That’s where a disk space analyser comes in: it scans your disk and shows you, in graphical form, where all that space is being wasted, giving you an idea of where to start cleaning.

There are plenty of disk space analysers you can pick from nowadays. Our favourite is WizTree for its looks and its absurdly fast speeds: 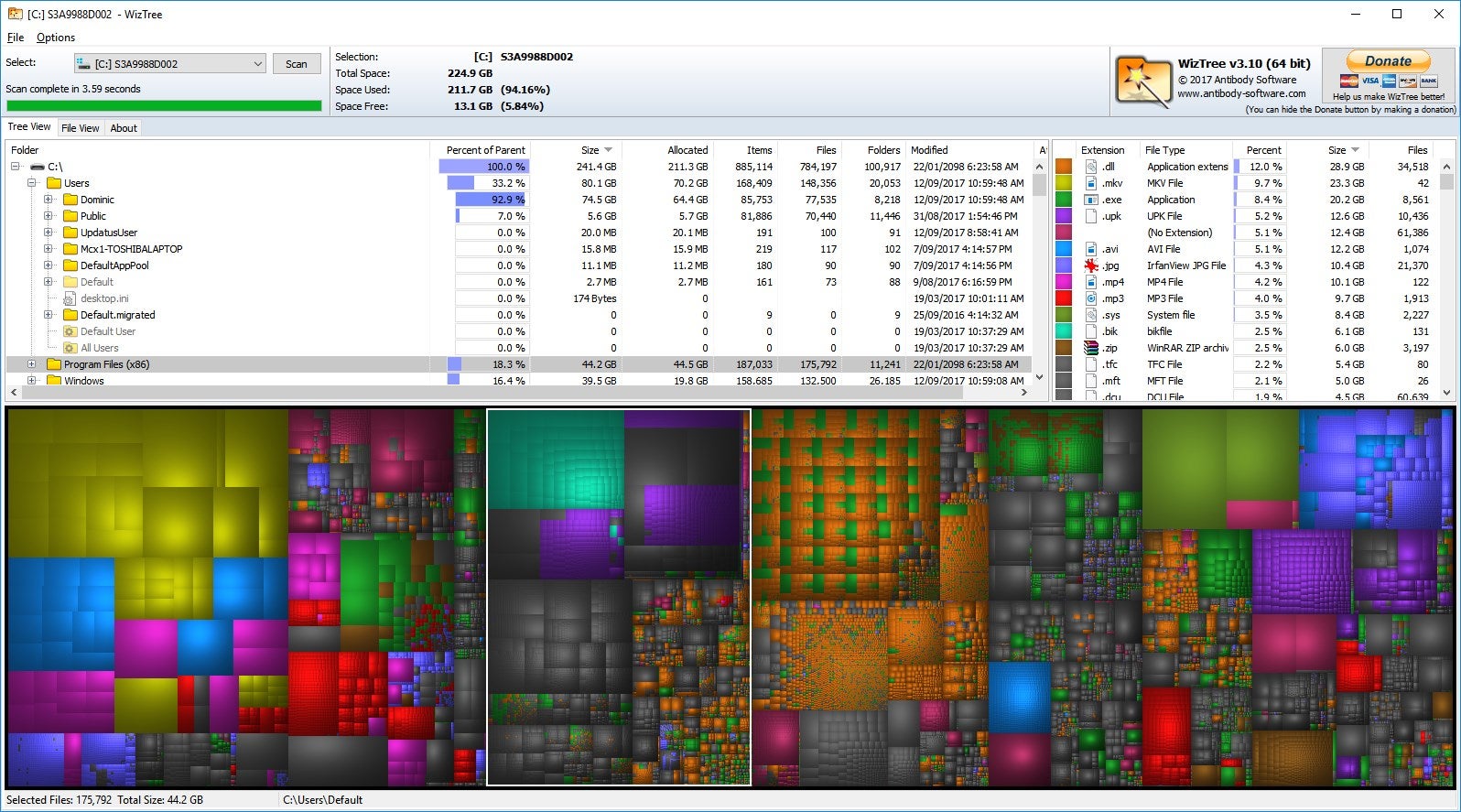 It’s hard to know where to begin with WizTree. You’ve probably never heard of it (even though we’ve talked about it), since you’ve probably heard of WinDirStat, instead. We love WinDirStat. WizTree is just as good, feature-wise, and it’s a lot faster. You don’t even have to install anything to run it; it’s completely portable. You can export its findings to a .CSV file if you want a historical record of your hard drive, or if there’s some kind of extra data analysis you want to run on WizTree’s findings. Otherwise, there’s not much else to specifically praise with this app. It’s a must-have, and you’ll be glad to run it from time to time when it pulls up some multi-gigabyte file or folder that you forgot about (or accidentally duplicated).

Where it falls short

There’s little we dislike about WizTree. The graphical interpretation of files on your drive might be jarring and confusing at first, but the program provides plenty of other methods you can use to interpret its findings. The app is free, with no nagging, but it does have a unsightly (and wiggling) Donate button in the upper-right corner—that’s not meant to be a strong criticism, however, as it’s respectable to seek payment for one’s awesome work. Honestly, we’re scraping the barrel to find things we dislike about WizTree. It’s just that good. Our only slight feature request would be for a way to scan all of your drives at once, rather than one at a time, but most people probably only have a single drive to their name (so it’s not that big of a deal). 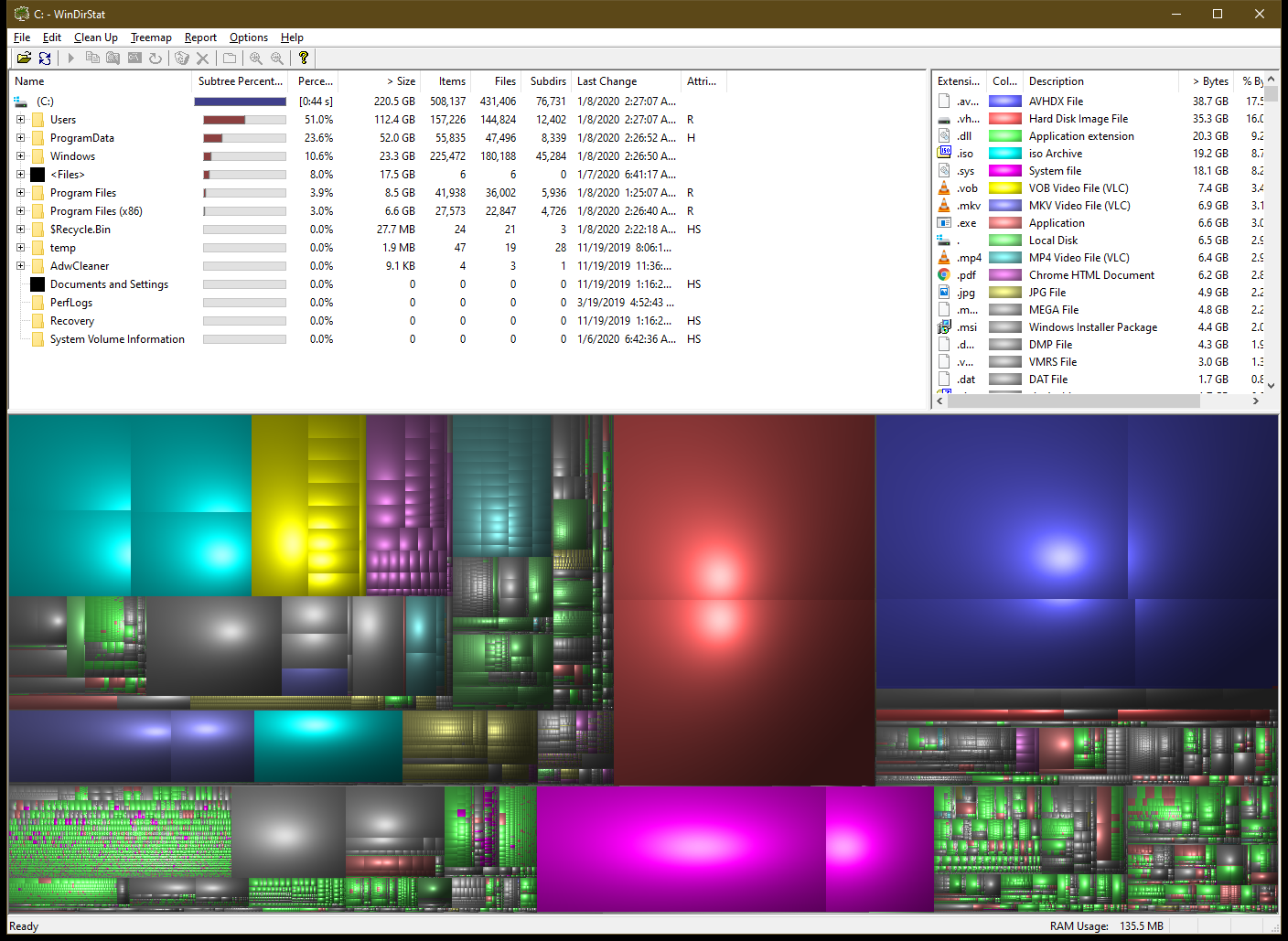 WinDirStat is a great space analyser that’s every bit as useful as WizTree. Its analysis is slower, and there’s no official version of it that comes as a portable app. You’ll have to install it to use it, which seems unnecessary. (You can grab a portable version that’s been created by others, but it’s not the same.) WinDirStat also doesn’t build its pretty graphical representation of your drive(s) until it’s done scanning; we like seeing it created in real-time. 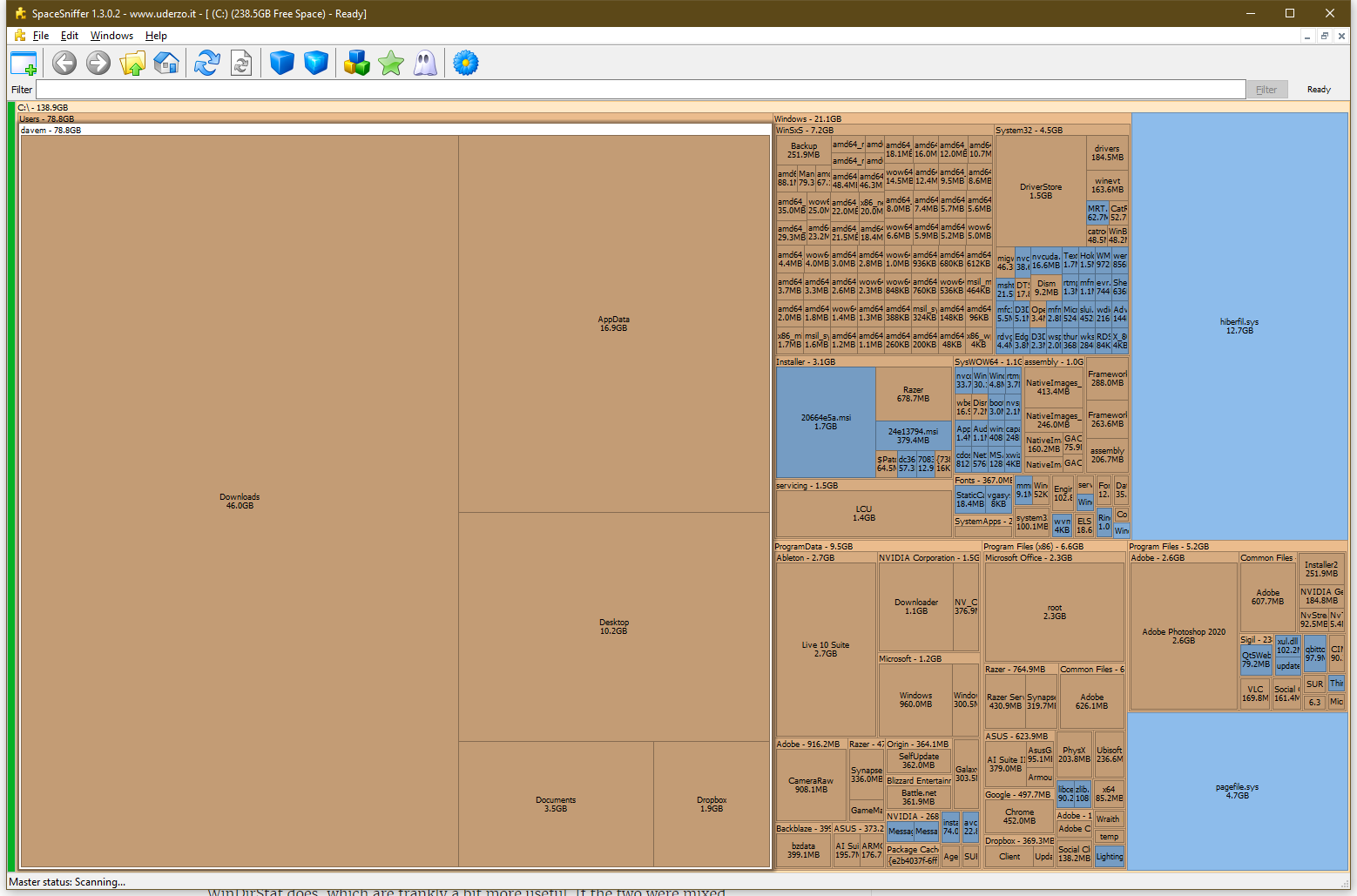 SpaceSniffer is another solid alternative to WizTree. However, we hope the app’s development is still ongoing; its official download listing indicates that the app hasn’t been updated since August of 2018. That’s not a deal-breaker, but a point worth mentioning. Otherwise, SpaceSniffer takes a bit more time to work than WizTree, and it’s a lot more focused on showing you a graphical representation of files taking up space on your drive. I haven’t found a way to get a simple text list of its analysis, which might not matter if you’re just hunting for large files to kill. Still, I prefer the hybrid approach you’ll find in WizTree or WinDirStat. 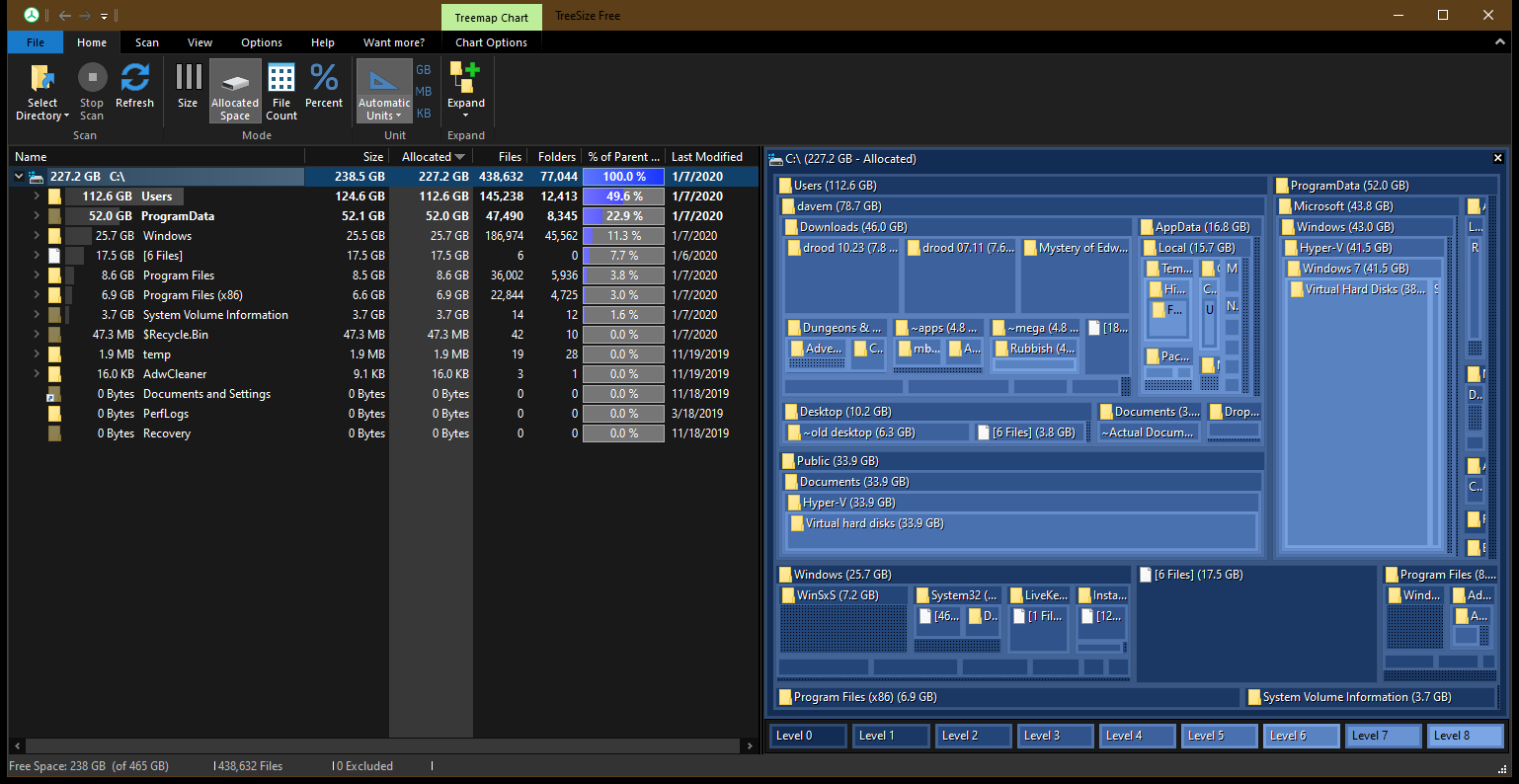 TreeSize is another popular option. It has a clickable Treemap that’s off by default; instead, you start with a folder tree with a built-in bar graph, like the top pane in WinDirStat. TreeSize is fine, but it’s not quite as pretty as the other apps we’ve profiled, nor is it as speedy as WizTree. (If you have a ton of nested folders, as most people do, its Treemap is going to be a little hard to figure out, visually.)

Of course, you could always try analysing your drive with a simple Windows Explorer search filter, too—it can show you some of the bigger files on your drive without any extra software necessary. It won’t show you big folders, though, so if your problem is large groups of files rather than large files, you’ll need one of the above to help you out.