With iOS 11, Apple changed up how you activate the Night Mode on your phone. The company originally introduced Night Shift in iOS 9.3 as a way to make screens a little easier on the eyes at night (and help you get some sleep in the process.

Now there are two options for your iPhone: That Night Shift Mode and a new ‘Smart Invert Colours’ mode that expands on an accessibility feature in iOS and makes for a pretty solid nighttime display option.

Here’s how they both work:

If you’re a fan of night modes like me, then you’ve probably already used Night Shift. The feature’s location is changed up a bit in iOS 11. Now instead of having its own dedicated button within the Control Panel, it’s hidden in the brightness slider. 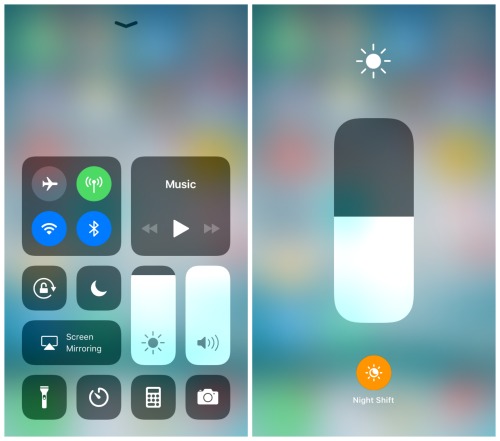 To activate it, swipe up from the bottom of the screen on your iPhone to bring up the Control Panel, and then select the brightness slider from the icons that launch. When the slider comes up full screen, you’ll see the Night Shift button at the bottom of the page.

Unlike some other night modes that invert colours, Night Shift just adjusts the amount of blue light your phone is emitting. Some things you look at might even look identical to you to how they do without Night Shift on. The idea behind the feature is that you’re taking in less blue light, which in turn will help you sleep better.

If you want the screen to be dark, then this next feature is for you.

Apple previously offered an invert colours option in iOS. Designed as an accessibility feature for those might have trouble with the traditional screen, it inverted the colours of everything on the screen. For some people that might be great (I definitely used it), but if you want to keep a few things at full colour, then the new Smart Invert Colours option can be a great solution. 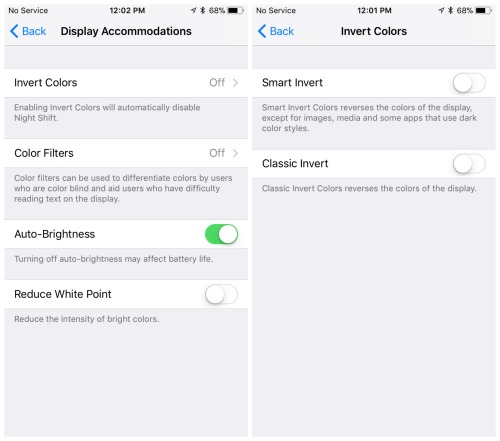 This feels closer to a “Night” mode for me than Night Shift does.

You can activate the mode by Going into the Settings menu on your phone, selecting General, followed by Accessibility, then Display Accommodations, and then Invert Colours. From there you’ll have the option to choose Smart Invert or Classic Invert.

Besides making things easier to see, I think it’s a pretty cool look for the phone and something you arguably could just leave on if you want.