100 Australian Words And Sayings Everyone Should Know

Every language has its own slang and phrases you should master to sound like a true native speaker. Australian English is no exception.

You may have heard “G’day mate”, “fair dinkum”, and “strewth!” before, but the dialect is much broader than that. Try these next time you speak to an Aussie and you might convince them you’re “true blue”.

Blowing the froth off a few

Meaning: Someone who is lazy or doesn’t work

Meaning: An uncouth or unsophisticated person

For years, two words have blistered around seats at Australian sporting events like a thunderclap. Sparked by a lone wolf, an individual in the crowd with extra air in their lungs, a deep, booming chant erupts. A verbal see-saw in the name of national pride.</p><p>Aussie! Aussie! Aussie! Oi! Oi! Oi!</p><p>I hate it.

Meaning: Can’t be bothered to do something

Meaning: Someone acting silly or crazy

Meaning: Full to the brim

Meaning: Taking a day off work or school without necessarily being sick

Meaning: To make a U-turn in a vehicle

Meaning: Getting stroppy or angry

Meaning: To be angry or upset

Meaning: A mess or a complicated situation

Meaning: A stupid or incompetent person

Dry as a dead dingo’s donga

Meaning: To be thirsty, usually for alcohol

The hard-drinking Aussie is the stuff of legend and lore. But there’s little proof Australians drank more than other colonials and by some accounts they drank less (points made in Sidney Baker’s The Australian Language). But, of course, we do enjoy a drink – at times a little too much – and a rich bevy of terms suggest we do it in Australian ways. merrily, tongue in cheek and with a shout or two.

Meaning: An exclamation to proclaim something as true or genuine

Fair shake of the sauce bottle / fair crack of the whip

Meaning: To give someone a fair go or chance

Meaning: Someone not very bright or slightly crazy

Meaning: A shirt made from flannelette

Meaning: An insult used to describe a fool or an idiot

Meaning: A rumour or story, that’s untrue or absurd

Meaning: To go missing or head off without warning

Meaning: The silver pouch inside a cask wine box

Meaning: A light-hearted insult to describe a foolish person

Have a go, ya mug

Meaning: Used to encourage someone to attempt something, usually if they are unsure

Meaning: Describing someone who is unattractive

Meaning: Someone who has no self control

Not here to f**k spiders

Meaning: Let’s get the job done

Meaning: Someone with a heavy Australian accent or mannerisms

Meaning: An insult similar to “goose”

Meaning: Used either seriously or ironically to describe something as a big deal, or make it not seem so important Meaning: A sausage served in white bread with tomato sauce. Used as a fundraiser, especially at election polling booths (a “democracy sausage”).

Meaning: Someone learning to surf

Meaning: Everything will be fine

Meaning: To buy the next round of drinks

Meaning: Drinking alcohol from a shoe to celebrate a win

Meaning: A quick break from work for a cigarette or snack

Meaning: Someone employed as an electrician

Meaning: To throw a tantrum

Meaning: Football with a round ball, such as the EPL.

What Is The Average Australian Weekly Wage?

Straight to the pool room

Meaning: Used to describe something of high quality or to be proud of

Meaning: A can of beer

Meaning: To figure out a tricky or unknown situation

Meaning: To make fun of someone or something in a light-hearted way

Meaning: Used to describe someone with unrealistic expectations

Meaning: A can of beer or a small aluminium boat with an outboard on the back 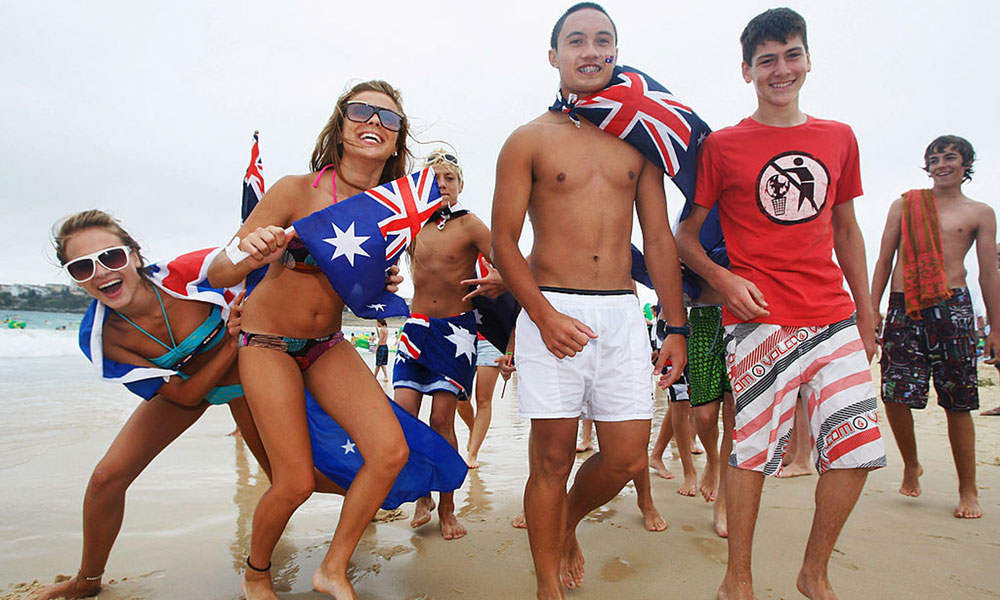 Meaning: Used to describe someone with an inflated opinion of themselves

Meaning: Bottom; but “up the waazoo” can mean “lots of something”