I’m a very low-trust person when it comes to networks. If it is at all avoidable I wont connect to a public Wi-Fi network. And even though most of the conferences and conventions I attend use passwords to secure access to their networks, I still don’t trust them. For me, a VPN is now one of the first things i install on my computers, tablets and smartphones. Over the last few weeks, I’ve been trialling three different VPN solutions on my iPhone 7 Plus; Wangle, NordVPN and Norton WiFi Privacy. Here’s what I’ve found.

There are hundreds of VPN solutions available on the market. Two things have made it relatively easy to sell your own VPN product. One is open source software. OpenVPN and others are a low cost way to create a VPN you can on-sell. Of course, you also need servers for users to connect to. And that’s where cloud service providers come to the fore. Creating a network of 50 servers is far simpler and cheaper today than it was a decade ago.

But it’s not all sweetness and light. When you buy access to a VPN service, you’re not just getting encrypted access to the internet. You’re also buying trust. You need to know the VPN provider is not snooping on your data and that they are protecting logs of your network activity.

That can be very difficult to evaluate as not all VPN providers are transparent about that.

Evaluating the performance of a VPN is also tricky. A network is only as fast as its weakest link and this can be variable. When I connected with each of the three solutions I tested, I found performance varied, even when repeating the same actions just a few minutes apart. As best I could tell, this was a factor of who else was connected to the same public networks I tested on and what other users were doing.

For that reason, my views on performance are objective. In most cases, while it was obvious to me there was a small performance hit when using any of the three solutions, it was not enough to make work untenable or frustrating.

Some of you might be interested in using a VPN in order to obfuscate your location so you can view online content that is geoblocked. All three apps I tried let me watch Netflix from different countries but Hulu was another story.

So, my TL;DR is: all three solutions worked well. I tested them while traveling in the US at hotels, airports and public hotspots, at airport lounges in three Australian cities and while using cellular comms. There are some usability and price differences but all three are good candidates if you’re looking for VPN software for iOS devices.

I mentioned Wangle a while ago. Since then, the company has provided me with a log-in to their service to try it out.

Perhaps the biggest limitation with Wangle is the number of connection points they have across the world. They have just nine points of presence globally with one in Australia, two in Europe, two in the USA and a few others scattered around the place. That might lead to connection latency issues.

However, Wangle’s main selling point is that is uses a proprietary VPN protocol they developed themselves. The company says this allows them to compress and optimise network traffic so the number of bytes you need to send around is reduced – something you can see on the app’s display.

When I landed in a new country, Wangle did not automatically connect to the closest point of presence. So, when i arrived in the US, it connected me via Sydney. That’s fine if I want it to look as if I am in Sydney but not if I’m after the fastest possible performance. It’s easy to manually change connection points through the settings but it’s something to watch out for.

One other thing – as I mentioned a while ago, Wangle has had legal advice telling them they are a telecommunications service provider. that means they retain your communications metadata in compliance with the metadata retention laws that are in effect here.

Wangle is available on a month-to-month subscription of $4.99 per month so it’s cheap to try. 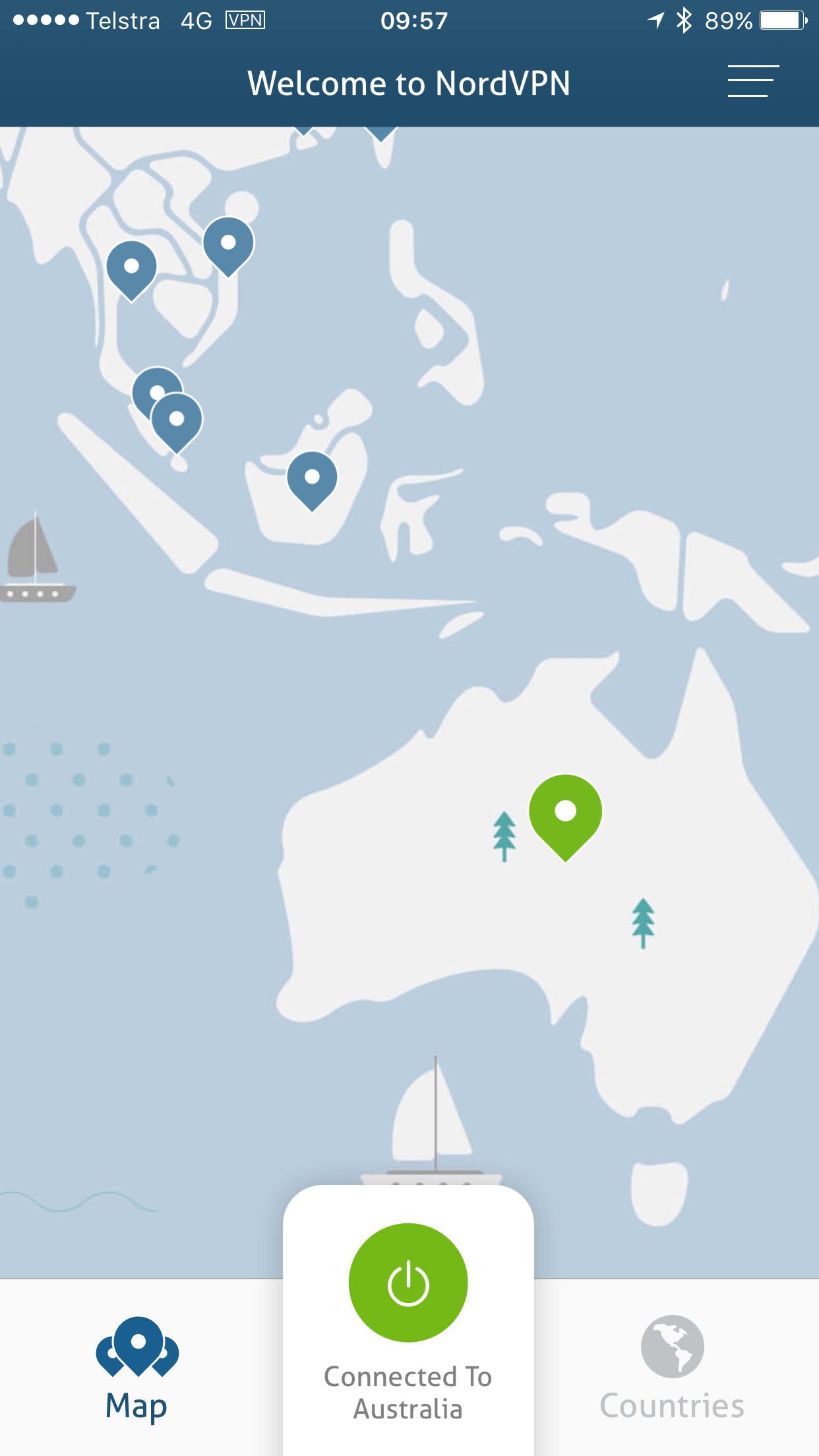 NordVPN is a multi-platform VPN solution. I paid for a two-year subscription so I could use it on my iPhone, iPad and Windows 10 Tablet – the three devices I carry with me when I travel.

NordVPN has points of presence all over the world and recently boasted of switching on their 1000th server worldwide. Choosing which country you connect through can be either by tapping on a pinned location on a map of the world or by selecting a country from a list. Most of their points of presence are in the EU and surrounding countries although they also have plenty of connection points in the Asia Pacific region and the Americas.

You can designate favourite servers to connect to so there’s no need to scroll through the entire list each time you want to temporarily connect from a different locale.

NordVPN is built on OpenVPN and they support pretty much every end-user computing platform.

I found their map annoying to navigate so ended up using the country list to add a couple of favourites which made the job of switching countries far easier.

With pricing, you can choose to take up your subscription through the App Store or Play Store. But my suggestion is to check the NordVPN website as they seem to offer much better deals there. There are monthly, half-yearly and annual plans available and they are significantly cheaper there than via the app stores. 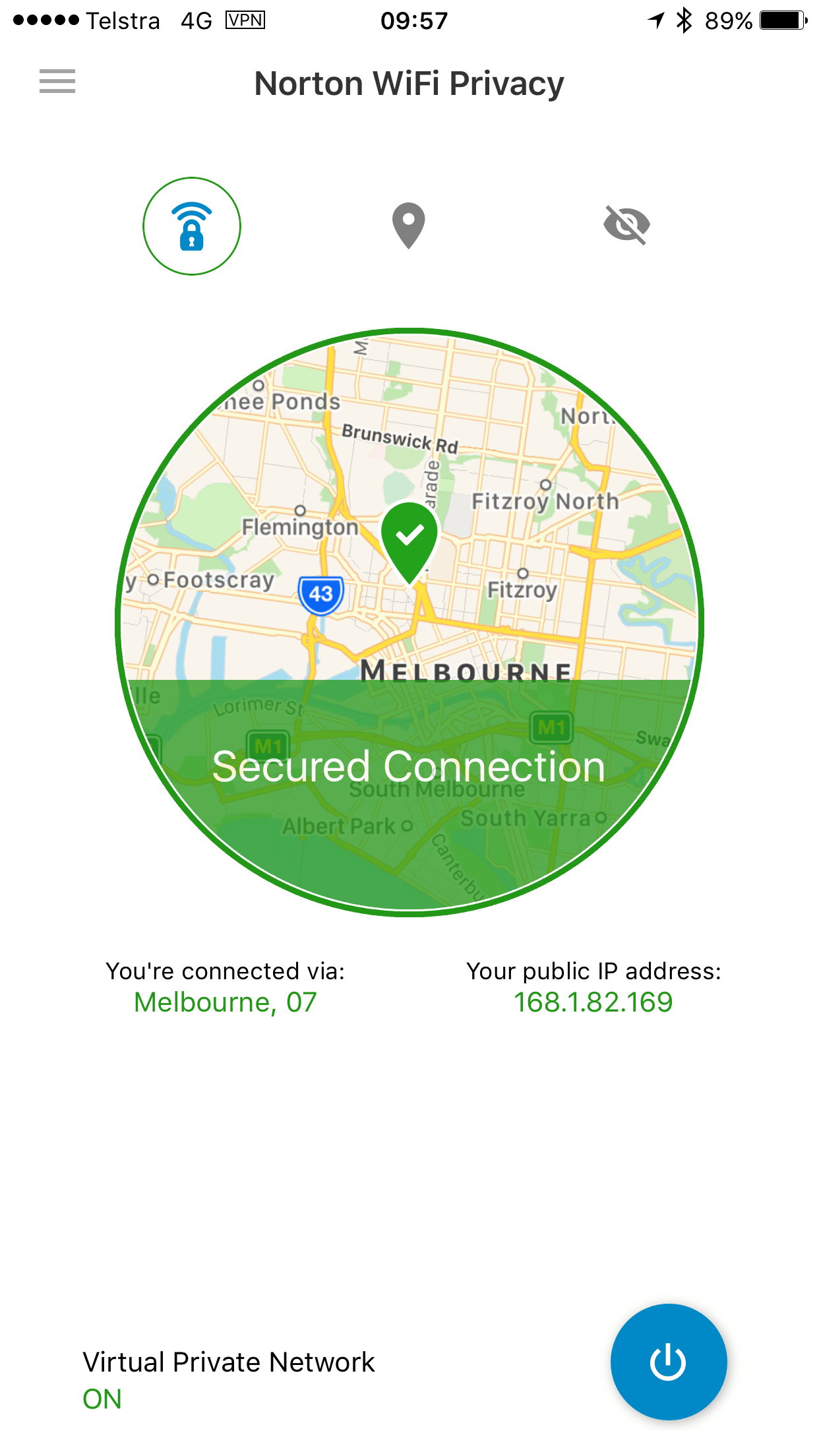 Of the three apps I tried, Norton WiFi Privacy has the best user experience. The auto-select option quickly connected me to the closest point of presence in Norton’s network or I could choose from a long list of countries.

Initially released for mobile devices, there are now versions for macOS and Windows as well.

Rather than offering a map, you can choose you connection point from a list of a list 30 countries covering the US, Europe, Africa and Asia. As a bonus, the app can also block ad tracking and Norton promises to not store logs of any of your web browsing.

Pricing ranges from $46.99 per year per device through the App Store with three and five device plans also available.