Five Games That Make The PS4 Pro Worth It

I only bought the PS4 Pro because Sony told me to. Sure, I knew what 4K was, and I could spell HDR, but that was about it. My TV at the time was still merely “full” HD (a descriptor I’d since learn to be a vicious lie) and I always figured 30fps was about the best a console scrub could hope for.

So what exactly was the PS4 Pro for then? It wasn’t clear. It’s what was next. So I bought it.

Then came the purchase of a shiny new 65” UHDTV, and with it the chance for Sony to finally reveal its bright vision for a 4K HDR future. A host of games, both brand new and recently remastered, promised to harness the PS4 Pro’s increased power to completely blow my arse out with more pixels, more frames, more dynamic range and generally Make Gaming Great Again.

Does it? On the right setup, can HDR and the resolution bump really transform your PS4 gaming experience? And if so, which games really deliver? After extensive testing, below are five PS4 titles that can made my Pro investment worthwhile, in order of awesomeness.

It’s no surprise Naughty Dog’s latest would end up looking amazing on PS4 Pro. What’s most striking though is how well the added colour range enhances outdoor scenery – from the way light hits the leaves, to the shadows of trees, reflections in the water or the game’s spectacular skyboxes. Everything is amped up to an even more shamelessly lush degree on the Pro, making it a great choice to show off your new gaming setup.

The developers have clearly favoured lighting, post-processing and texture clarity here over pure resolution, as the Pro renders the game at 1440p (not full 4K), but it hardly matters. The extra processing power may not revolutionise the game in any way, but there’s certainly a sense that it enables the developers to bring you their very best vision of an already exceptionally beautiful game.

In contrast to Uncharted’s enhanced-reality aesthetic, if you could play a Pixar movie, there’s a fair bet it would look like Ratchet & Clank. You know a game’s production values are sky high when you can barely tell the gameplay from the cutscenes. The PS4 Pro patch for Ratchet & Clank brought with it HDR, better anti-aliasing and a “much higher resolution” thanks to a technique hilariously referred to as “Temporal Injection”.

Whatever that is, the results are stunning. The Solana galaxy has never looked more vibrant and alive, the game’s colourful cast of characters look even smoother and more polished, and the overall experience edges ever closer to feeling like big-budget CGI, rather than a real-time game engine. It still runs at 30fps, suiting the free-flowing platform gameplay perfectly well.

Abzu, the enchanting adventure game from Giant Squid Studios is the Journey of the PS4 generation. And like Journey, the point isn’t so much to beat the game but to enjoy the ride. What makes Abzu shine on PS4 Pro is the way the game exploits 4K to enhance the sense of scale and immersion you feel as one lone diver swimming through its vast underwater world.

As weird as it sounds, doubling down on resolution absolutely transforms the sensation of being lost in an ocean of sparkling reefs, looming caverns and teeming ocean life – which is essential for a game that’s mechanically little more than a swimming-forwards simulator. The game still looks fine at 1080p, but feels normalised and flat compared to the Pro version, making 4K absolutely instrumental to the full experience. 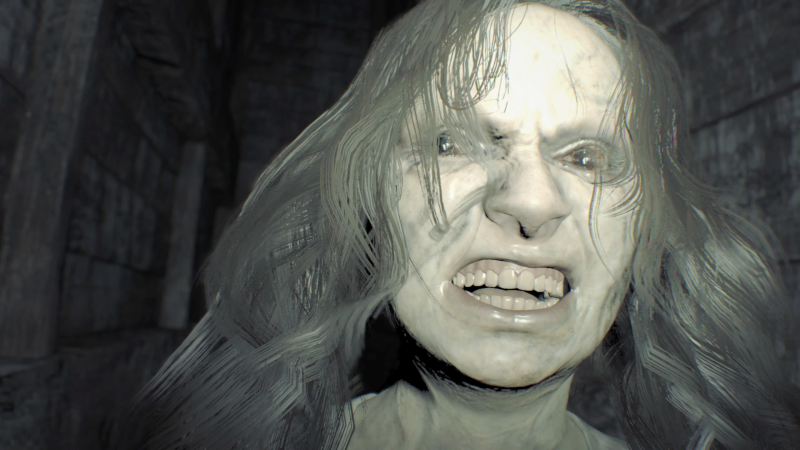 Resident Evil 7 is a welcome return to form for Capcom, and in addition to the much vaunted option to run the whole stomach-churning gauntlet in VR, it’s the game’s approach to HDR that deserves the most attention. Darkness is everything in horror, and the developers have truly harnessed the PS4 Pro’s increased colour range to bring the Baker family homestead to grotesque life with deeper shadows, more nuanced lighting and a thicker, more oppressive atmosphere than ever before.

They take it so seriously that the game even features a special HDR calibration tool at the start, just to ensure every jump scare and spouse decapitation is seen exactly as the designers intended. Since most of the game is played in confined spaces, the 4K bump doesn’t make anything particularly clearer, but frankly, for a game that thrives on grime, entrails and filth, that’s probably a kindness.

For my money, the single greatest showpiece for the PS4 Pro is Thelka’s technicolour indie puzzle epic. This might seem like an odd choice, but as it turns out, a slow-paced, atmospheric exploration game is by far the best showcase for the subtle ways 4K and HDR can be used to truly enhance the minute-to-minute gaming experience.

The rich colours, foliage and minute environmental details of Jonathan Blow’s abstract island are gloriously enhanced by the wider colour palette and sharper resolution, giving you even less of an excuse to miss the multitude of visual hints and cues designed to help you solve the game’s puzzles and prevent you from screaming hopelessly at the TV. This still happens, by the way. It just looks prettier while you’re doing it.

The Witness offers three display options for PS4 Pro – standard 1080p at 60fps, 1440p at 60fps and full-bore 4K at a reduced frame rate of –gasp!- 30fps. The 4K option is absolutely gorgeous and by far the best choice. Save your fancy 60fps for Overwatch.

While the results of all the games tested varied from barely noticeable to flat-out gorgeous, the success criteria for this list remained the same – was the look of the game immediately different and noticeably better running on the PS4 Pro, and was the investment worth never returning to the “standard” non-pro version? Each of these five games easily met that standard.

Still, it’s a little too early in the Pro’s lifecycle to unconditionally recommend the upgrade – after all, it’s tough on developers to commit serious resources to servicing a pretty niche portion of the PlayStation ecosystem. Regardless, these games give a powerful sense of what’s possible on the new hardware – it remains to be seen how much further Xbox’s Scorpio is willing to push the arms race when Microsoft gets their turn in June.

Rick Salter is a Sydney-based indie developer. He’s also the producer of the Devils and Details podcast for Business Insider, which is published by Kotaku Australia’s parent company Allure Media.