The PiDrive Foundation Edition is essentially a hard drive that also comes with an SD card installer that lets you install and boot from multiple operating systems. The SD card has a special version of the NOOBS OS Installer loaded onto it. With it, you can install either Raspbian or Raspbian Lite into different partitions of the drive, which WDLabs calls “Project Spaces”.

Basically, this makes it so you can have several versions of Raspbian installed on one hard drive, making it much easier to bounce between different projects. It also just makes the process of installing an operating system on an external hard drive easier, so if you need to do that in lieu of a SD card, it’s worth looking at the PiDrive for that too.

The Project Spaces are the real selling point here, as the ability to load up multiple OS’s on a Raspberry Pi has always been a pain. This way, you can easily set up multiple users or projects on a single Pi, with a shared partition that each space can access. Sadly, only Raspbian and Raspbian Lite are included as installation options here, leaving a hole where the OSMC media centre software or RetroPie game emulator software would have made a heck of a lot of sense as options.

Of course, you can install those manually once Project Spaces sets up each partition, but it’s not totally the one-click installer I was hoping for.

Still, as pretty much the easiest way to divide up a Pi’s hard drive into different bootable operating systems, it does what it needs to. Each time you boot up the Pi, you’re presented with a screen to pick which operating system to boot into. Here’s what the installation screen looks like to give you a better idea of how it works: 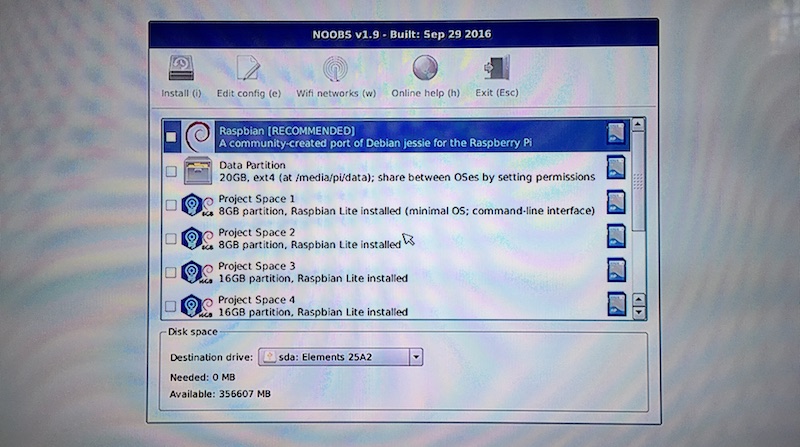 This isn’t for everyone, and if you’re fine swapping out SD cards for each project, then there’s no reason to pick up a hard drive. That said, if you do want to run a hard drive with multiple partitions and operating systems, the PiDrive is a great way to do so.