Why You Shouldn't Trust Sensational Stories Based On Google Trends 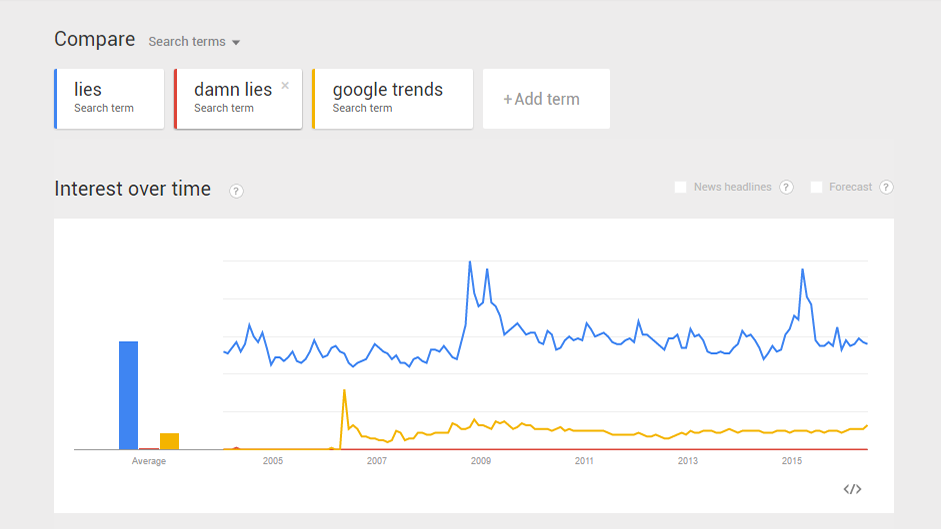 Google Trends is a neat little tool that can show how often people search for things. It's handy for seeing when people first became aware of popular topics. However, sensational news stories about search trends use it improperly more often than not. As developer Danny Page explains on Medium, Google Trends shows relative search volume over time, but doesn't show exactly how many people are searching for a certain term. Relative search data is handy for determining that, for example, the Harlem Shake is pretty much done. However, some "obvious" conclusions are often flawed.

[The Washington Post] note[s] that searches about the EU tripled. But how many people is that? Are they voters? Are they eligible to vote? Were they Leave or Remain? Trends doesn't tell us, all it does is give us a nice graph with a huge peak. More likely, it's a very small number of people, based on this graph that puts it in context with other searches in the region...

But it's giving plenty of people cover to insult the entire country, when it's likely just a few people searching for something in a way that they always search for something. It makes "The British are frantically Googling what the EU is, hours after voting to leave it" absurdly disingenuous without better numbers. Update: Remy Smith points out this out: The peak was merely ~1000 people! It's ludicrous that so few people get turned into a massive story, but it underscores the need for context.

Without absolute values for the number of searches that are being performed in "spikes" on Google Trends, it's impossible to know exactly how many people are searching for a topic. As Page points out, there was certainly a spike in the number of people asking "what is the EU?" after the Brexit, but that was a very small number of people out of a very large population. Google Trends can only tell part of the story, so keep an eye out next time a site turns a single chart into an overblown outrage.